Swing Seat Dems Made The Majority, Can They Keep It?

In the 2018 midterm elections, 43 Democrats picked up House districts previously held by Republicans to deliver a 235 seat House majority.

Now as we head into the 2020 cycle, the DCCC has 44 House Democrats in their Frontline Program designed to protect vulnerable incumbents, meaning that 191 districts could be considered easy holds at this point in the cycle.

There are some big differences between the districts these Frontline members represent and the districts of those holding safe seats in the rest of the caucus. We decided to take a deep dive to better understand the playing field of these Frontline districts, which will decide control of the House, and see where and how they differ from the safe blue places Democrats will continue to represent no matter which party has the House majority.

In the 2016 elections, the 44 Frontline now-Democratic districts gave Hillary Clinton an average of 46% of their vote. By contrast, the 191 safe Democratic districts gave Clinton an average of 65%. The Frontline members are concentrated in competitive areas where swing voters decide elections. Most of the other House Democrats can easily win with only voters who routinely, if not exclusively, vote Democratic up-and-down the ballot. 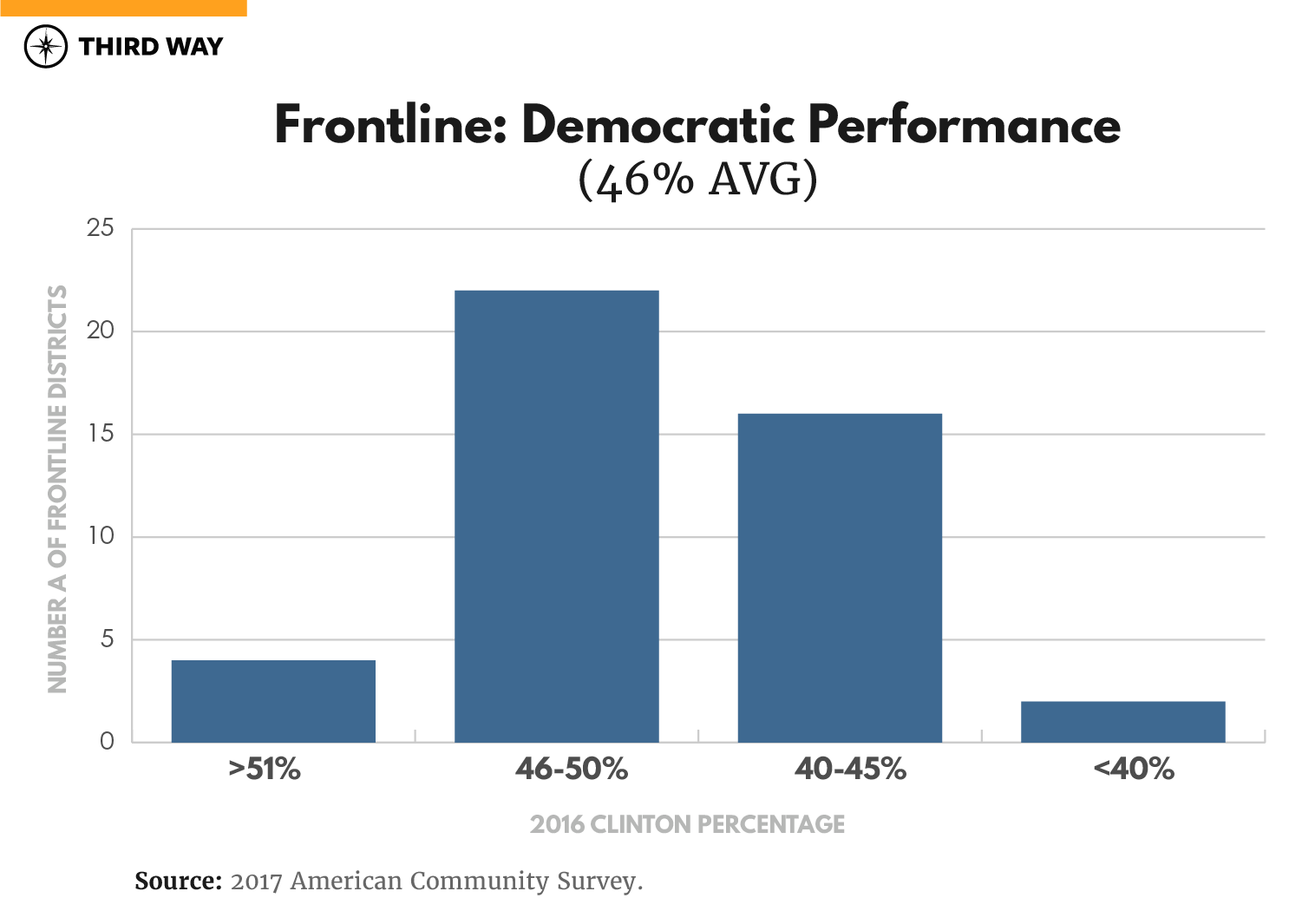 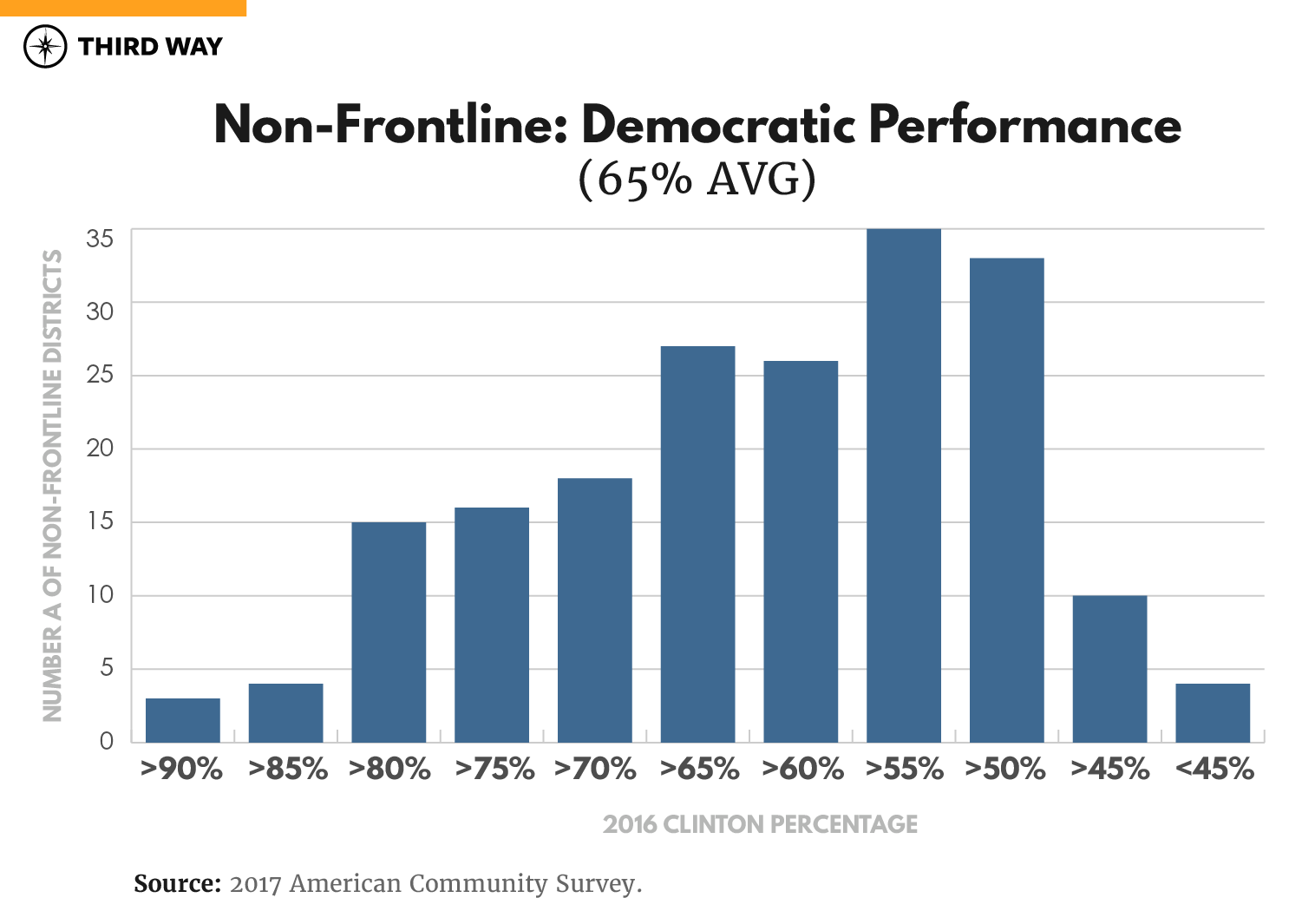 This reality is made even starker when you look at the fact that 37 of the 44 (84%) Frontline members won their elections by single digits in 2018 compared to only 3 of the 191 (2%) other House Democrats. To win in the Frontline districts, members need to appeal to a broad coalition of voters—including those who sometimes vote Republican.

The Frontline members represent districts that have a similar racial breakdown to the national average—about 66% non-Hispanic white. Ten of the 44 Frontline members represent districts that are majority people of color. The safe blue seats look very different; on average, they are about 48% non-Hispanic white, meaning, people of color are a majority of their constituents. 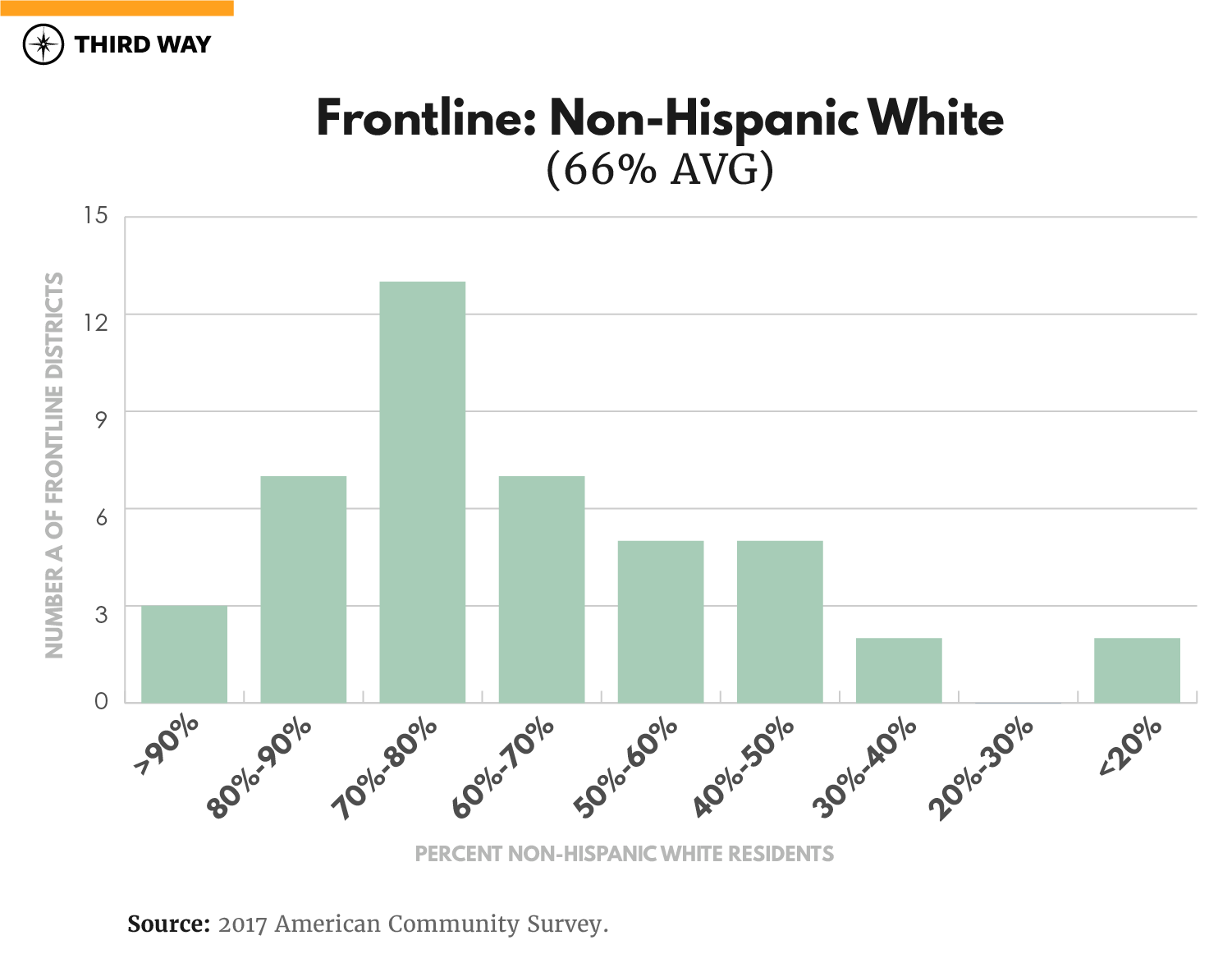 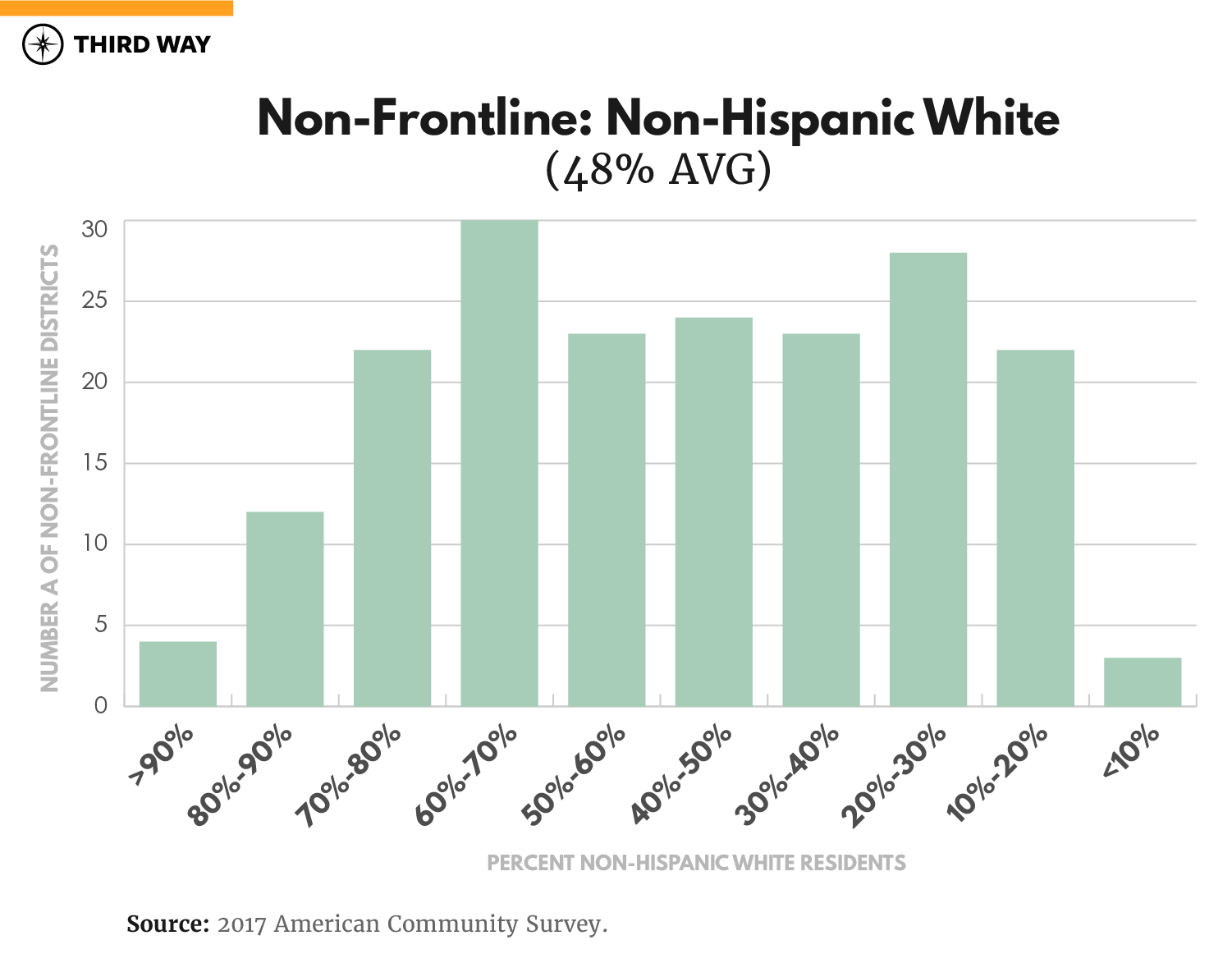 Frontline districts tend to have an ever-so-slightly higher educational attainment than the rest of the House Democratic districts, but this is less stark than some of the other differences above.

In Frontline districts, about 36% of constituents have obtained at least a bachelor’s degree. This compares to 34% in the rest of the Democratic districts around the country. 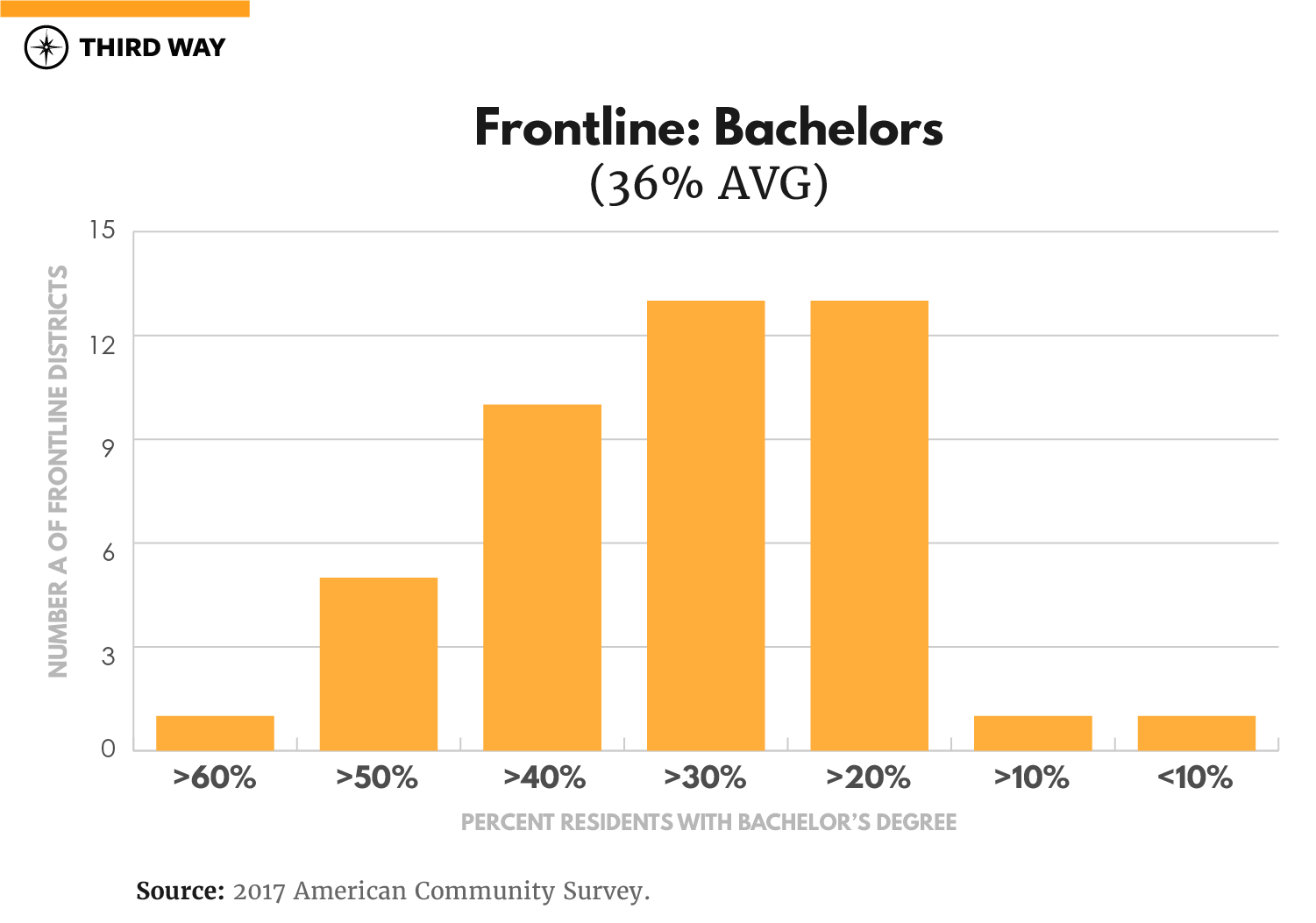 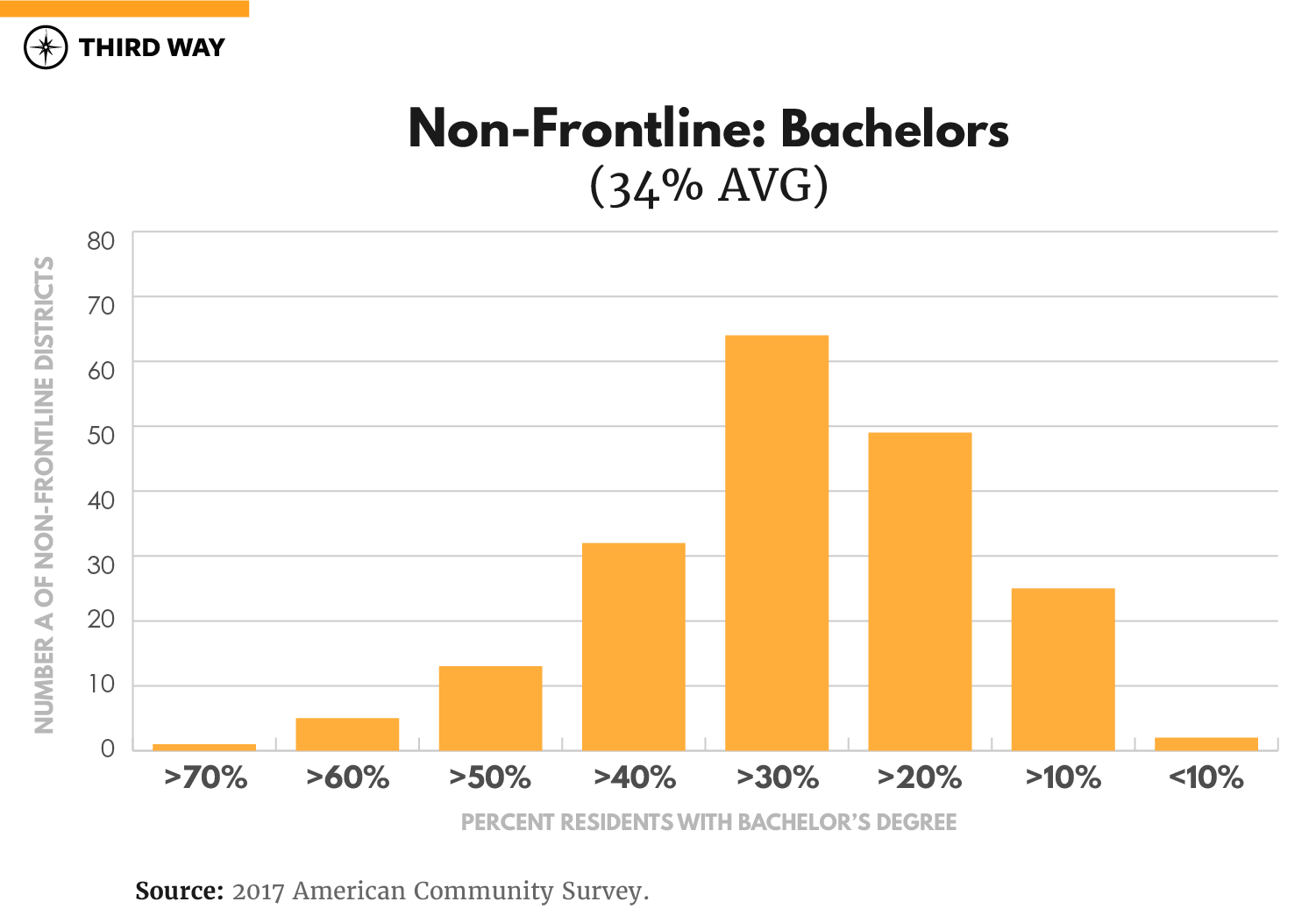 Frontline members represent areas with higher incomes but lower home values than the universe of safe blue seats. The Frontline districts have a median income of $68K and a median house value of $268K. 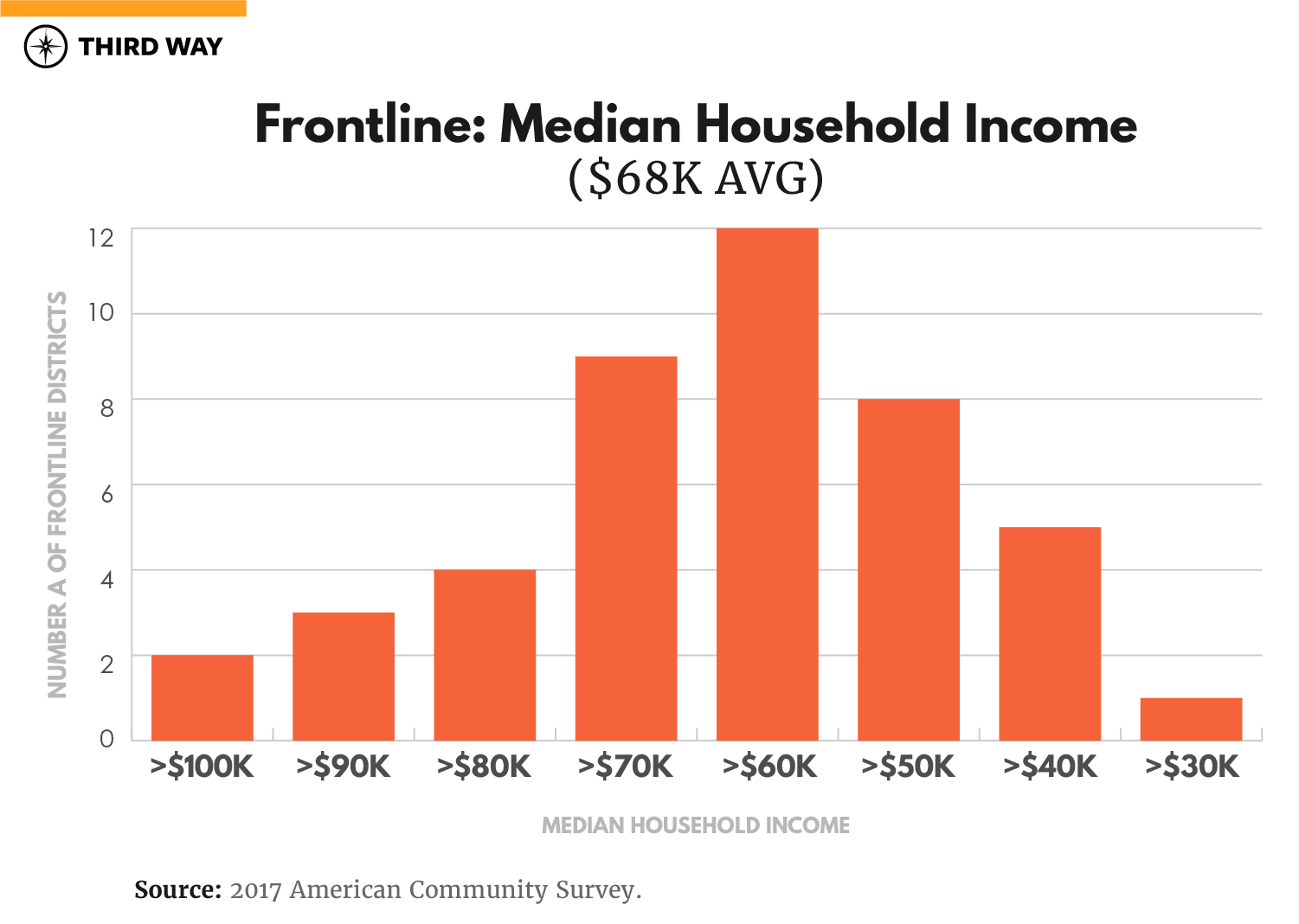 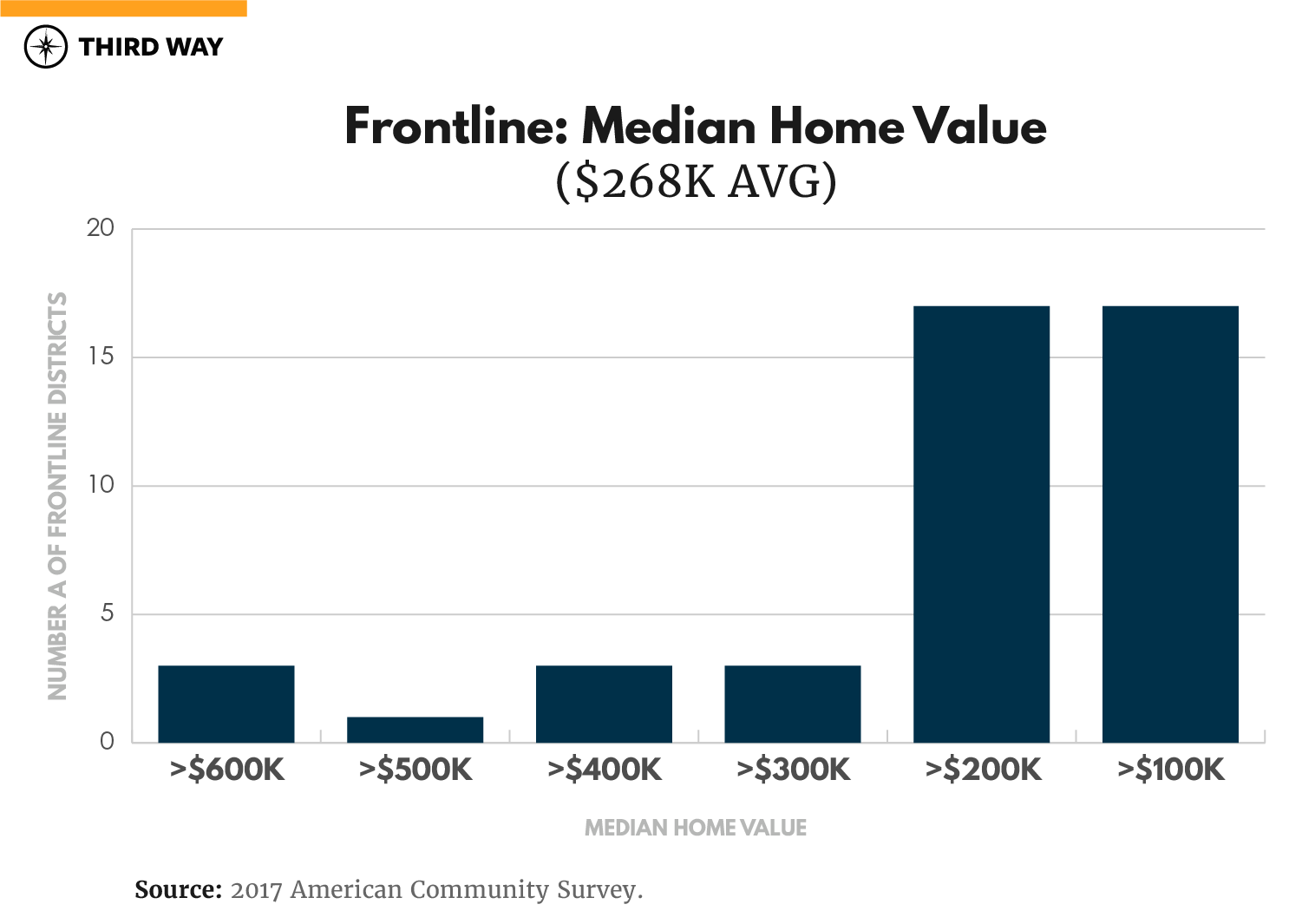 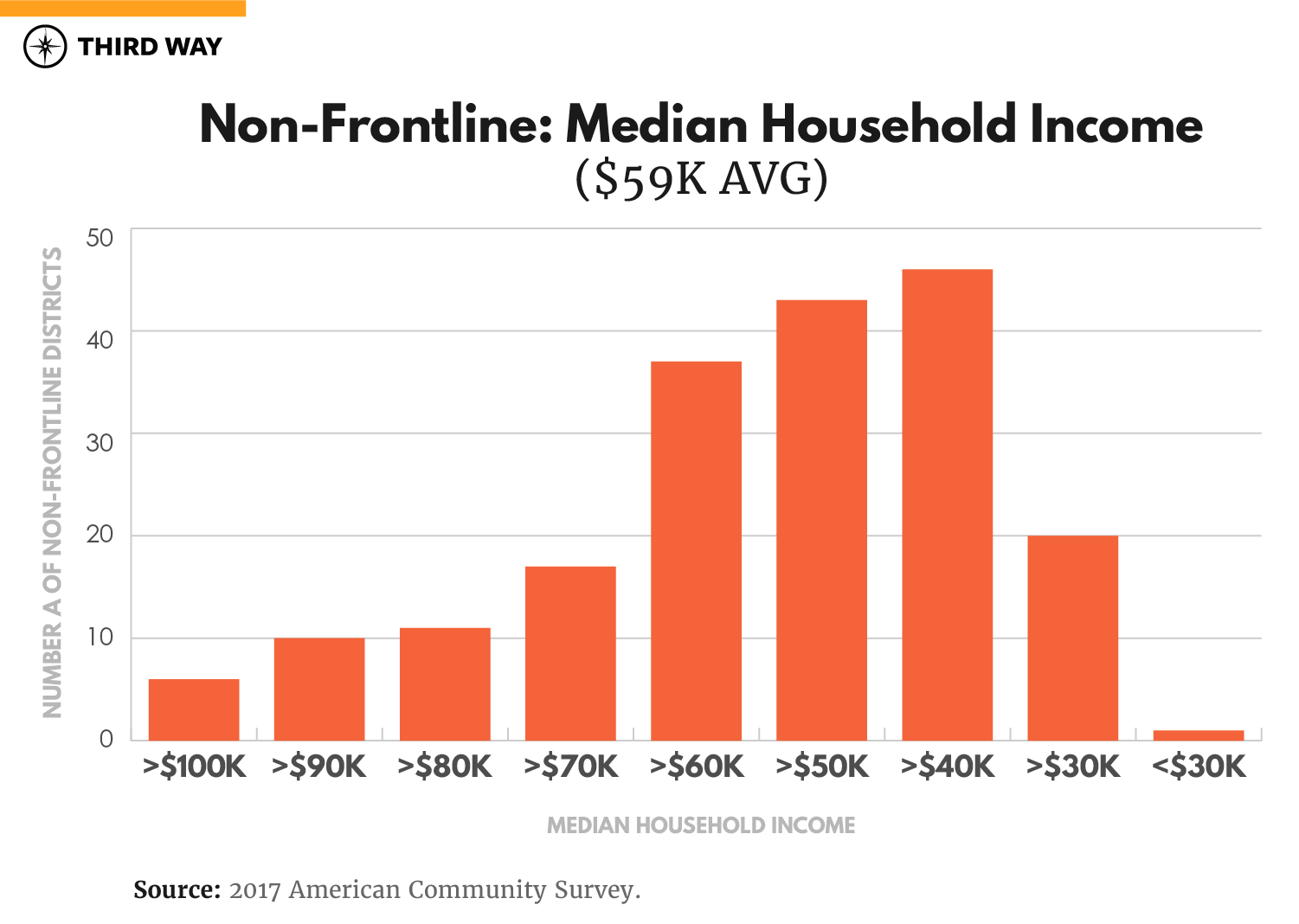 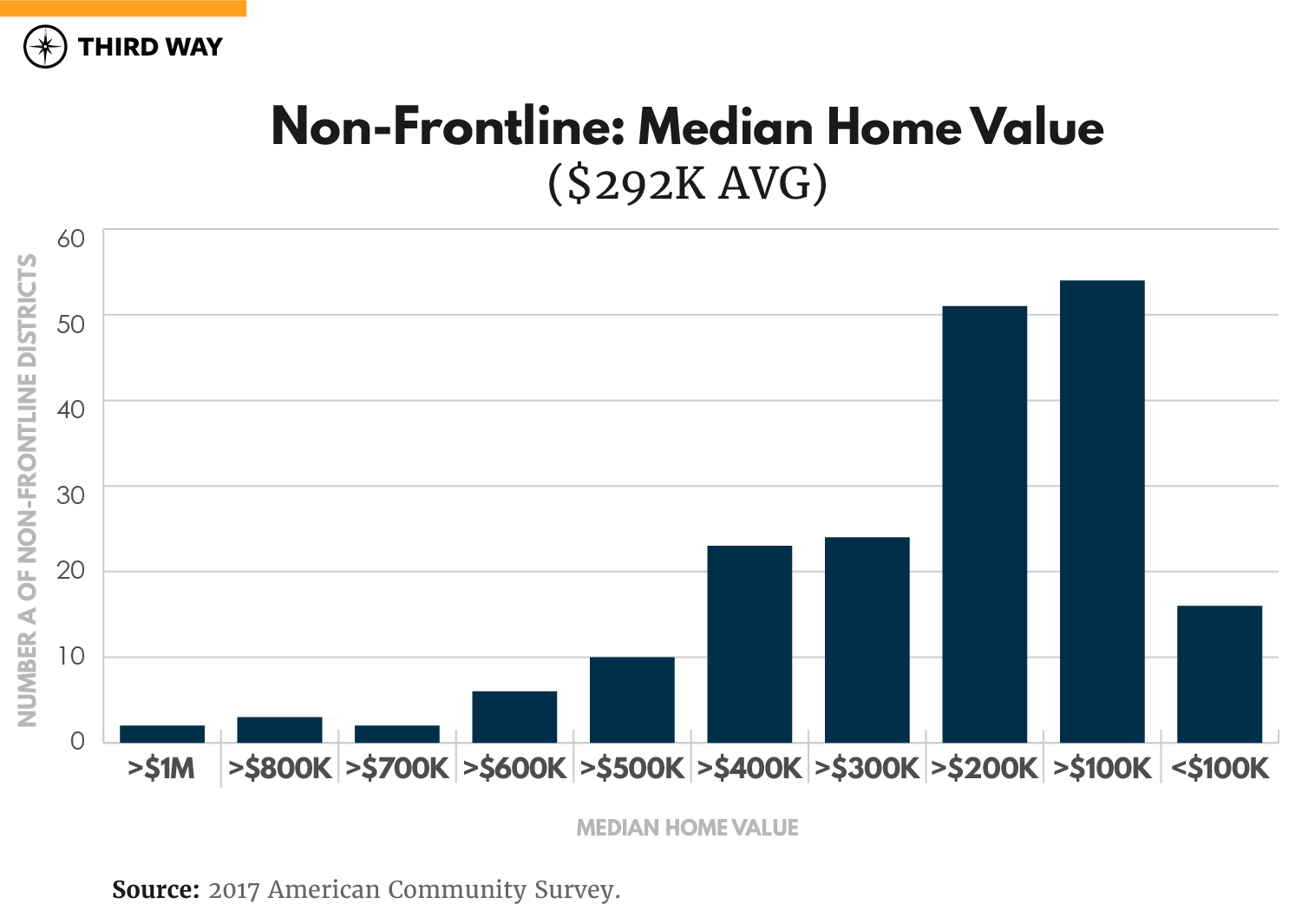 These differences aren’t necessarily massive, but the fact that they are pulling in different directions helps explain why the electorally-vulnerable Frontline members may have a slightly different perspective than the rest of the caucus on certain economic issues.

The Democratic majority will be held or lost in Frontline districts. These districts are higher income, less racially diverse, less dense, and incredibly electorally competitive. It should come as no surprise that 32 of the 44 Frontline members are active in the moderate New Democrat Coalition and focused on core issues important to their constituents like protecting healthcare coverage, fighting corruption, and expanding economic opportunity. If Democrats focus on these core issues that can unite all 235 Democratic districts, they’ll have a better chance to hold their majority in 2020.