Democrats, Republicans, and Independents all agree on one thing: cost is their top health care concern.1 Congress can quickly address that concern by ensuring that however the Build Back Better Act (BBBA) evolves and moves forward, it continues to cap health care costs for America’s workers. A cost cap consists of limits on premiums and out-of-pocket costs based on income. There were three specific cost caps in the House-passed BBBA that are critical to maintain as the Senate looks to move the legislation forward: 1) extend the cap on premium costs for all workers who receive coverage through the Affordable Care Act’s exchanges; 2) lower the cost cap on premiums for coverage through medium and large employers; and 3) cap costs for low-income workers who live in states that have not expanded coverage through Medicaid.

Workers need permanent protection from high health care costs through a cost cap so that health care is affordable for their budget and does not lead to bankruptcy. The cost cap provisions in the House-passed bill build toward a universal cost cap while preserving the various ways that Americans get health insurance, including through employment-based coverage. In this memo, we examine how the BBBA provisions caps costs for workers, maintains and improves employment-based coverage, and is a model for future reforms.

The three cost cap provisions in the House-passed BBBA are centered on ensuring workers can afford health coverage. Specifically, they would:

1. Extend caps on premiums for workers and their families with exchange-based coverage. This provision would extend the Affordable Care Act (ACA) cost cap included in the American Rescue Plan through 2025. The cost cap lowers the premiums people in the exchanges pay based on their incomes. For example, it cuts the cost of premiums by two-thirds for workers with exchange-based coverage and an income of $25,760 (200% of the federal poverty level). Before the American Rescue Plan, people earning more than four times the federal poverty level had no cap on their premiums. As the chart below shows, everyone in the exchanges can get affordable coverage based on premiums that fit their family’s income. This cost cap would expand coverage for 1.2 million people who today cannot afford any coverage.2 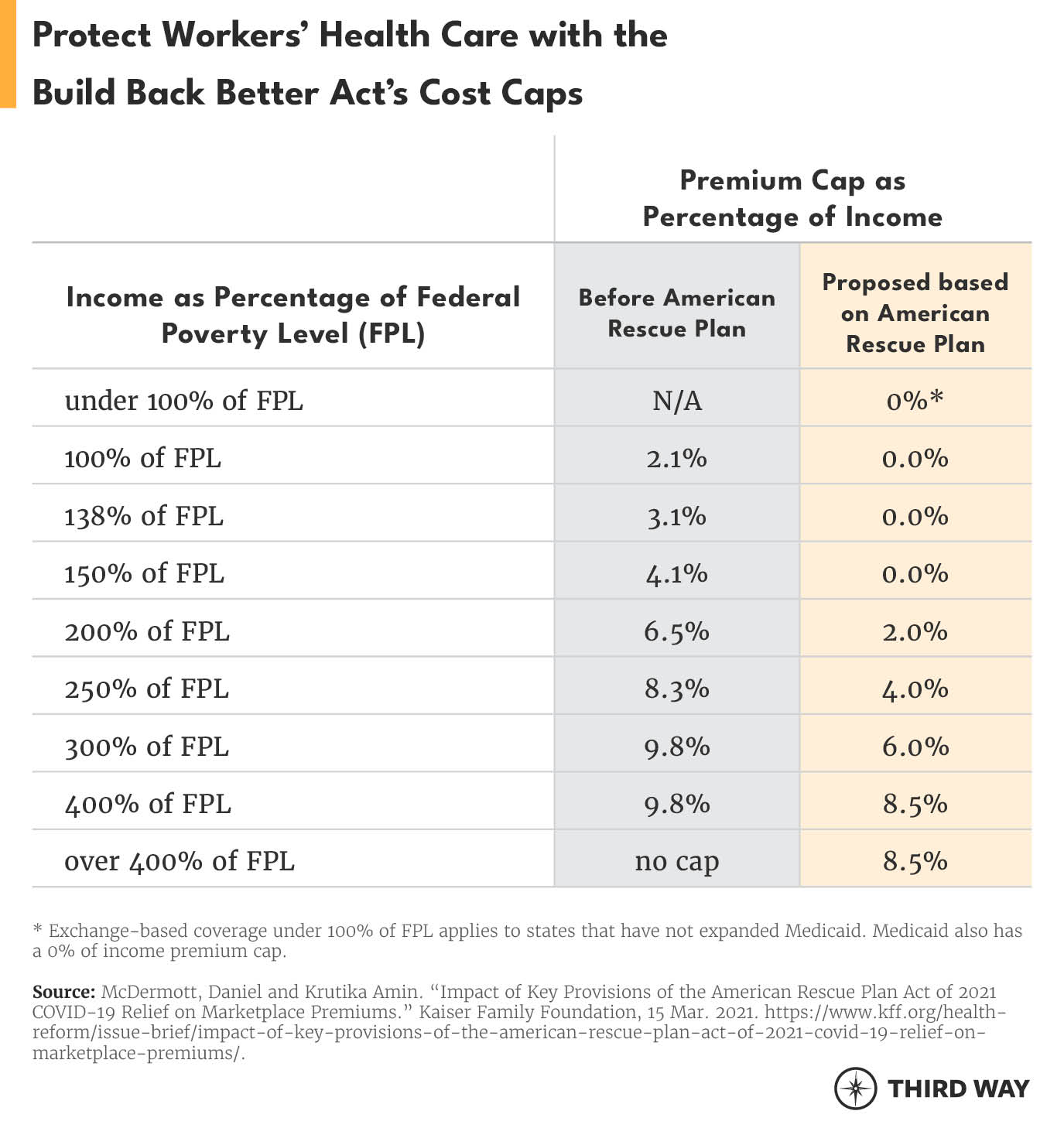 2. Lower the cap on premiums for workers with employment-based coverage. Employers with 50 or more employees will be required to ensure that their employees don’t pay more than 8.5% of their income on health insurance premiums. Under current law, medium and large employers face a penalty if their employees end up getting financial assistance through exchange-based coverage because their employer coverage did not meet the affordability standard. Currently, the affordability standard states that premiums can’t exceed 9.6% of a workers’ wages. The new, lower cap could save an employee with an average income as much as $739 a year.3

3. Cap costs for low-income workers. Workers with poverty-level incomes who live in the 12 states that have not expanded Medicaid as provided in the ACA will have a cap on their premiums and out-of-pocket costs for four years, starting in 2022.4 These low-income workers with incomes under 100% of the Federal Poverty Level will be eligible for coverage through the federal health insurance exchange, HealthCare.gov. They will have access to comprehensive coverage based on their income—regardless of whether their employer provides it—just as low-income workers have today in states that have expanded Medicaid.5 It will help reduce a major health care inequity, which leaves 51% of Black people, 28% of Hispanic people, 11% of Asian/Native Hawaiian and Pacific Islander people, and 22% of American Indian and Alaska Native people uninsured compared to 11% of white people who are non-elderly in the 12 states that have not expanded Medicaid.6 Overall, this BBBA provision would lower the number of people without any coverage by 1.7 million.7

The health care provisions from the House-passed BBBA are essential for workers. And while the national debate has focused on changes to the ACA and Medicaid, improvements to employment-based coverage shouldn’t be overlooked. They not only preserve the employment-based insurance system in the country, which more than half the population relies on, they also strengthen it in two ways.

First, the BBBA provision to lower the cap on premiums would make coverage more affordable for employees at medium and large employers. Right now, employers with many low-wage workers are 20% less likely to see their employees sign up for coverage.8 For workers at those firms that do enroll, an employee earning poverty-level wages faces an average premium that is 12% of their income for coverage of just themselves.9 A lower premium cap would encourage employers to make coverage more affordable through innovative benefit design that pegs premiums to income while giving employees assurance their coverage will be more affordable.

Coverage in the states that have not expanded Medicaid has a side benefit of making coverage more affordable for employers with low-income employees.

Second, the BBBA provision for coverage in the states that have not expanded Medicaid has a side benefit of making coverage more affordable for employers with low-income employees. Employers in states that have expanded Medicaid have already benefitted from Medicaid expansion. Federal rules give employees the opportunity to have Medicaid coverage because it can be more generous than what their employer may be able to afford. For example, in the three years after states began to expand Medicaid, the number of employees with Medicaid working at small businesses (under 100 employers) grew by 50% from 5.1 million employees to 7.6 million employees.10 As a result, one-in-seven small business employees is enrolled in Medicaid coverage.11 At the same time, Medicaid expansion did not cause small employers to stop offering their own coverage.12 The BBBA provision gives low-income employees the same opportunity to enroll in exchange coverage as they would have for Medicaid if their state had expanded it and lowers employers’ costs for those employees.13

While our hope is that a version of the House-passed BBBA can move through the Senate and become law, other gaps remain and will have to be dealt with in the months and years ahead. Here are three areas where additional cost caps can help America’s workers:

The cost cap provisions from the House-passed BBBA are driving toward a universal cost cap, which would be available to all—no matter their existing source of coverage.20 Not only does the BBBA expand cost caps for workers, it also caps drug costs for older and disabled Americans through Medicare. And it continues a cost cap for people receiving unemployment through exchange-based coverage, a measure that was first enacted in the American Rescue Plan. Together, these provisions point toward a day when no one in America need worry about the high cost of health care.