Until last year, our understanding of how many students obtained a college degree was surprisingly limited, as the federal graduation rate left out a wide swath of our current college-going population by only counting first-time, full-time students. This incomplete data left institutions decrying federal graduation rates as an unfair representation of their true success with students.1 But what happens if you were also able to count part-time students and those who transferred into an institution? Would the graduation rate go up, go down, or remain the same?

Last fall, the federal government released institutional graduation rates that include part-time and transfer students for the first time ever—providing researchers and policymakers with the clearest picture yet as to how well colleges are doing when it comes to helping all of their students earn a degree once they’ve started. An analysis of this data finds that when including students who have transferred into an institution in addition to those enrolled as part-time, the federal graduation rate actually decreases, further illustrating the reality that we have a college completion crisis in the United States.

Given this new data, this memo identifies where our system is falling short and outlines key priority areas policymakers should address to ensure that more students who start college actually finish with the credentials and degrees they need to be successful in today’s economy.

It should be noted that the new Outcome Measures survey treats students who “transfer out” from an institution as non-graduates, but gives credit to an institution for graduating students that “transfer in.” This treatment of transfers is likely to have a greater effect on institutions that transfer out a higher percentage of their student body populations, a factor that should be taken into consideration when reviewing this analysis. However, the federal graduation rate has always counted transfer out students in this way, meaning that the purpose of this analysis is to show how this federal rate changes when part-time and transfer-in students are included in the calculation.

We fully acknowledge that there remains room for improvement in federal graduation measures, however, this new data presents an important opportunity to better understand the completion rates of a broader range of students than previously before.

Over the past several years, many institutions have raised concerns that the federal graduation rate—which only counts first-time, full-time students—is unreflective of their student body and, therefore, inaccurate and unfair.5 But the national portrait of college completion actually looks worse when including those previously invisible students. For students who entered an institution in 2008—including part-time and transfer students—only 45% obtained an award or degree by 2016 at the institution where they started. By counting part-time students and those who transferred into an institution, the data reveals that the overall outcomes for this cohort are six percentage points lower than the graduation rate for first-time, full-time students during the same eight-year time frame. 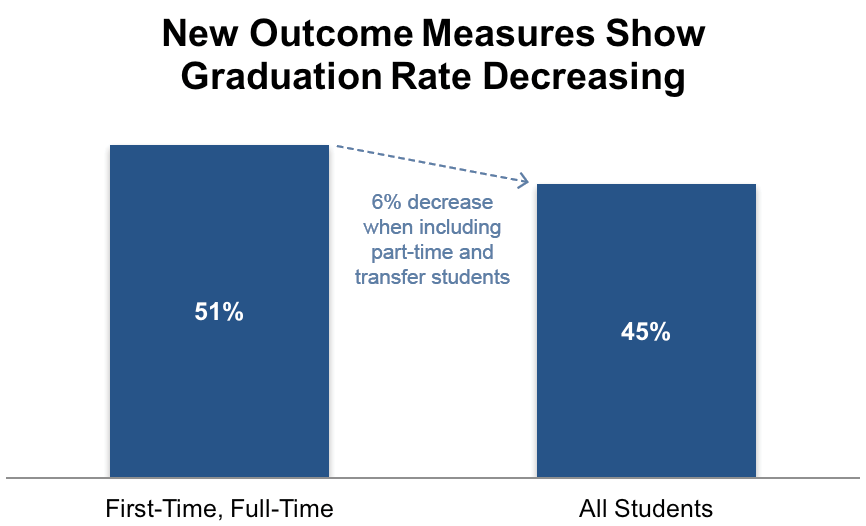 The data also reveals that this gap in graduation rates between only first-time, full-time students and outcomes for all students exists across all levels of institutions, and actually widens as you move from four-year to two-year and certificate-granting institutions. 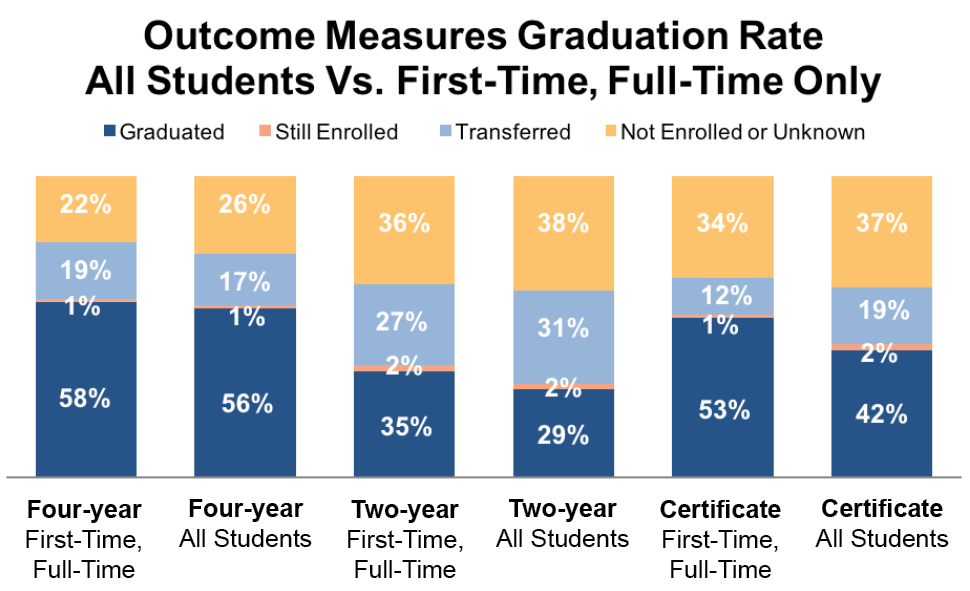 Part-time students make up 25% of all students in the new Outcome Measures data, and their enrollment is projected to grow faster than full-time students through 2025; yet, this data confirms what previous studies have shown—that part-time students are also significantly less likely to graduate than their full-time peers.8 With these students making up one-fourth of our college-going population, this gap is a significant driver of the college completion crisis. 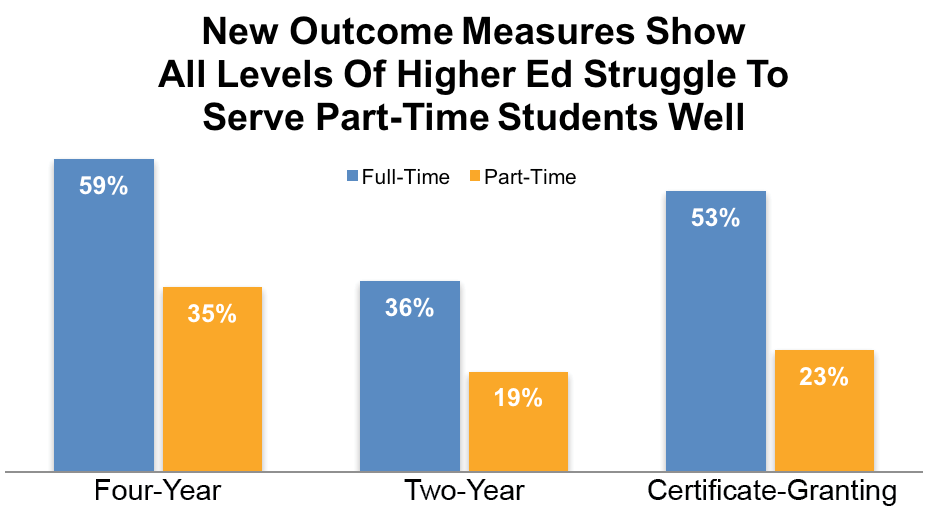 Broadly speaking, part-time students face different obstacles than their full-time peers, including being more likely to work at least 40 hours per week while attending school and/or raising children—undoubtedly making it more difficult to complete a postsecondary program at the same rate as full-time students.11 While these barriers provide a reasonable expectation of why it may take part-time students longer to complete a certificate or degree, it’s important to note that this data measures how many students complete their programs within eight years – a significant amount of time, especially for those enrolled in two-year degree and one-year certificate programs.

Finding 3: Most Institutions Fail to Graduate at Least Half of Students

Even before including part-time and transfer students, previous studies of federal graduation rates have shown that the typical institution leaves students with a mere 50-50 chance of graduating from the college where they started.12 This means that federal data—which until now has only included first-time, full-time students—has in fact presented one of the more optimistic looks at graduation rates since it began being reported after passage of the 1990 Student Right to Know Act, as this new data finds that the average institutional graduation rate goes down when part-time and transfer students are added.13 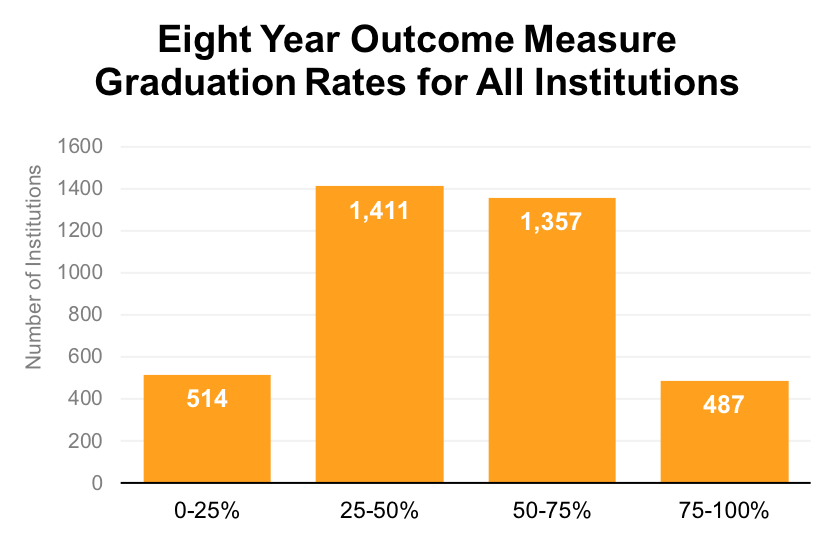 When looking at institution-level graduation rate data capturing all students in the new Outcomes Measure survey, over 1,800 degree-and certificate-granting institutions (over 50% of all institutions) across the U.S. still graduate less than 50% of their students eight years after they enrolled. Additionally, 514 institutions leave over three-quarters of all of their students without any sort of academic certification or degree and, even worse, 32 of those institutions fail to provide an award or degree to 90% or more of their student bodies. Yet, taxpayers still shell out billions of dollars to allow these institutions to operate, and the federal government permits students to take out grants and loans to attend institutions from where they will have a one in ten chance of graduating.14

As mentioned in the methodology section, the current federal graduation rate continues to count all students who transfer out of an institution as “non-graduates,” as the federal ban on student-level data makes it impossible for students and policymakers to know how many transfer students go on to enroll in and graduate from a subsequent institution. As a result, treating transfer-out students as non-graduates is likely to have a disproportionate effect on institutions that pride themselves on transitioning students to institutions that offer more advanced degrees, such as many in the two-year college sector do today.

To account for this shortcoming, this section analyzes what the federal graduation rate would be by removing “transfer out” students from an institution’s enrolling cohort. To do so, we use the Outcome Measures data, and we exclude transfer-out students from institutions’ graduation rate calculation altogether, rather than treating them as non-graduates. 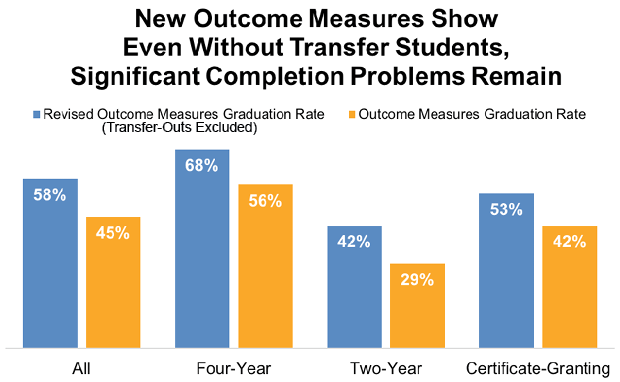 The data makes clear that significant completion problems remain present at all levels of institutions, even after removing transfer-out students from the current graduation data.15 While graduation rates increase across the board when you do the calculations as if none of those students who transferred ever enrolled in the first place, we see that more than four out of 10 students who entered an institution in 2008 and did not transfer out still failed to obtain a certificate or degree at that institution eight years after they enrolled. This is particularly notable within the two-year sector—which has a higher number of students who transfer out—as this analysis shows that even after removing transfer-out students, the graduation rate remains a paltry 42% after eight years.16 This means that even after we are removing transfers, the majority of students who enter a two-college fail to obtain any sort of credential, even nearly a decade after enrolling.

This new outcomes data released by the Department of Education paints a fuller picture than ever before. We can now see that the inclusion of transfer and part-time students lowers the national graduation rate. And while federal data can no doubt be improved upon, the Outcome Measures survey shows the extent to which we continue to lead many students to institutions that leave them little chance to obtain the credentials they initially sought. This is apparent through all of the graduation rate calculations made available today—whether you’re looking at the current federal graduation rate, the new Outcome Measures, or completion data from the National Student Clearinghouse—too many students fail to complete a college education even years after they’ve entered an institution.

It’s also now evident that with a growing population of part-time students, institutions must prioritize helping these students complete their certificate or degree. If we don’t focus on improving outcomes for this growing student population, we will end up worse than where we are now, with most institutions failing to graduate a majority of their students.

We have a completion crisis in our higher education system. Every year, 20 million students make one of the biggest financial investments of their life to attend an institution of higher ed.17 And every year, taxpayers invest nearly $130 billion to help subsidize this pursuit. Yet, right now, federal law fails to incentivize good outcomes for students.18

There is enough actionable information within this data for policymakers to implement laws that will give taxpayers and students a better chance at seeing the value of their investment in higher education. Federal policies need to be put in place to ensure that institutions are taking some responsibility for the outcomes of the students they enroll and aren’t leaving students worse off after they attend. If policymakers do nothing and the status quo persists, at most institutions across the United States, more than half of entering students will look back eight years later still lacking the certificate or degree needed to succeed in today’s economy.