Last year, the federal government gave institutions of higher education nearly $130 billion in federal student aid (not including educational tax benefits) to fund the education of 10 million students under the implicit assumption that these institutions will provide students with the opportunity to gain the knowledge and skills they need to better their lives.1 Yet, like your odds of winning thousands from a scratch off at your local 7-11, far too often this bet just isn’t paying out.

Those who complete a bachelor’s degree earn about twice as much as those who only graduated from high school.2 But those who start college and don’t complete are the most likely to default on their students loans—even though they often have much less loan debt than their degree-holding peers.3 With debt and no degree, non-completers often end up in a more difficult situation than if they had never attended college in the first place.

Yet last year, U.S. taxpayers sent close to $3.2 billion to 106 institutions that graduated fewer than 10% of their first-time, full-time students.4 This amounts to over $8.7 million taxpayer dollars per day going to institutions where students have more than a nine in 10 chance of not finishing. Out of the more than 91,500 first-time, full-time students these institutions enrolled, fewer than 9,150 of them earned a degree at the institution where they started. This federal data does not tell the whole story, given that it doesn’t include rates for part-time or transfer students. But with numbers as low as 10%, counting all students would almost certainly not bump these schools to acceptable levels, as many transfer students never graduate from any institution and part-time students are much less likely to graduate at all.5 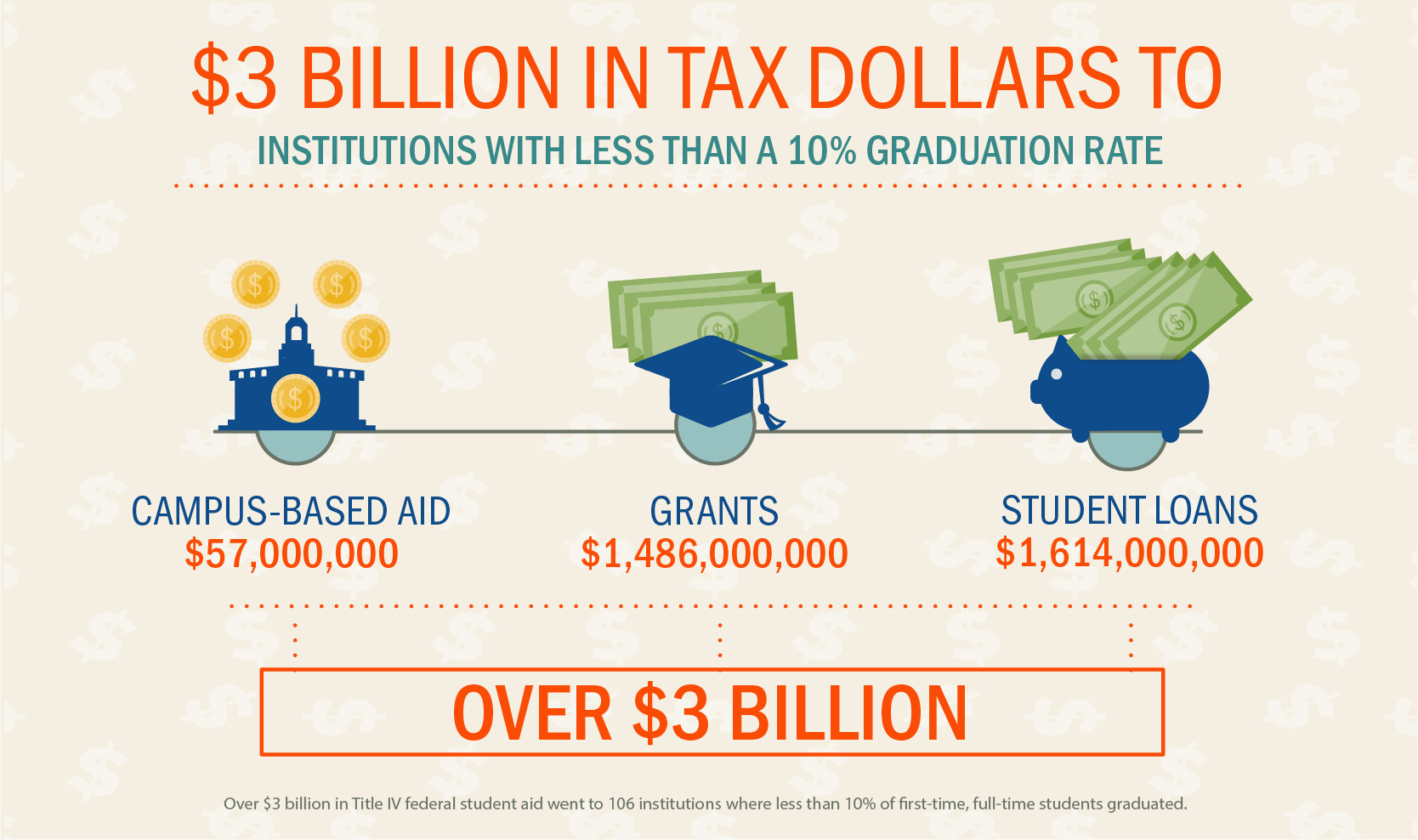 One example of an institution that falls in this category is Bryan University, an institution located in Los Angeles, California, that mainly offers classes in Parks, Recreation, Leisure, and Fitness Studies.6 In 2015, only 4% of 457 students earned a degree from that institution.7 Even so, last year taxpayers still provided over $20 million in grants and loans to students who attended this institution, even though 96% of former students did not receive the degree or certification they were seeking.8 Without having earned these credentials, finding employment in the 21st century economy becomes even more of a challenge.

Most students attend college because they think it will help them find a well-paying job that provides some financial stability. To measure this outcome, the U.S. Department of Education looks at how many of an institution’s students who used loans or grants to attend earn more than the average high school graduate ($25,000 per year) six years after they enrolled. This provides a strong indication of whether or not these students are more financially secure after they attend. If only half of an institution’s students earn more than the average high school graduate, it’s essentially a financial coin flip for entering students. 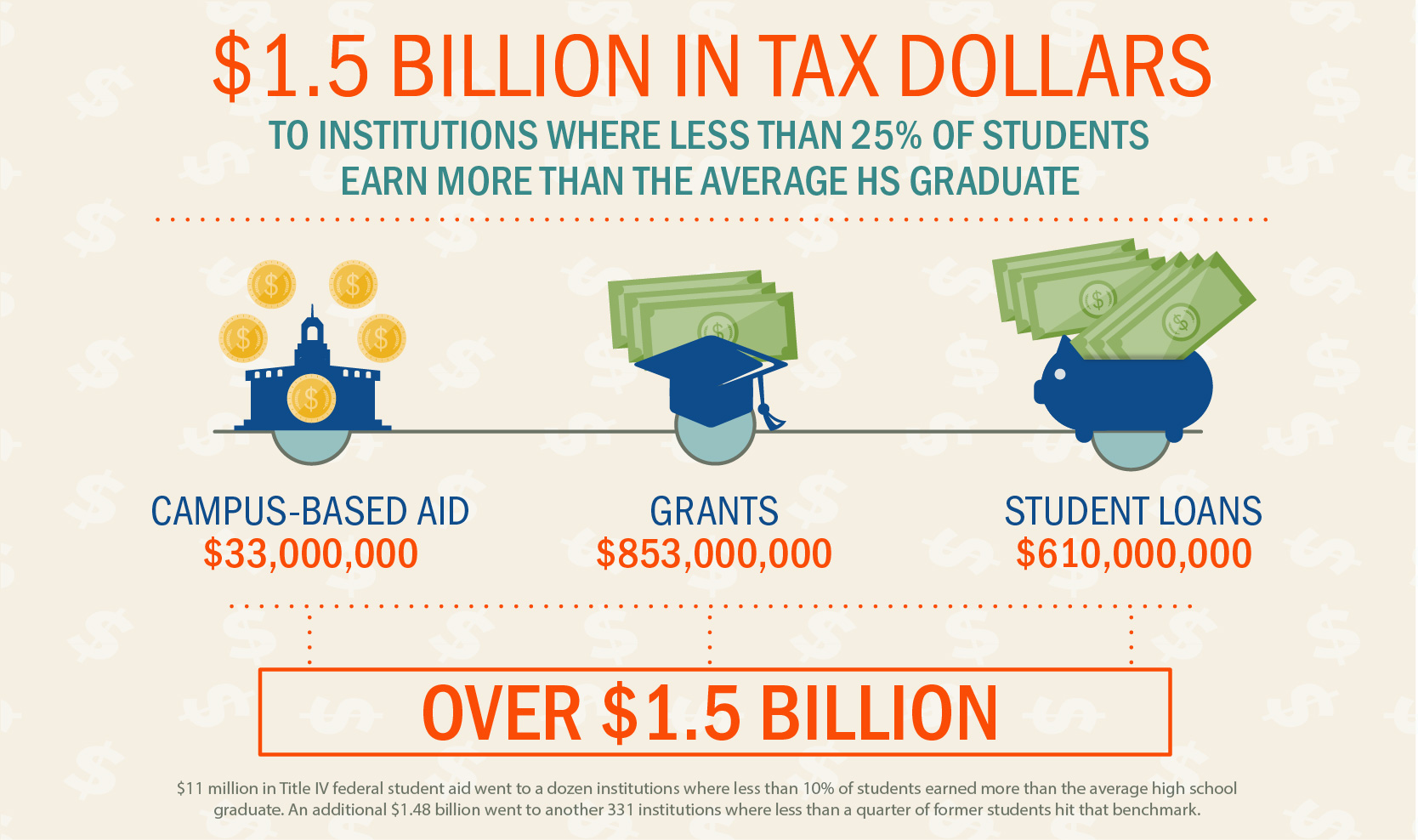 One example of an institution that received millions in federal funds is Unitech Training Academy, an institution that grants certificates, not degrees, with five campus locations across the United States. This school cashed checks for over $15 million in student aid over the past year, yet only 22% of its former students earned more than a high school graduate six years after enrolling. As you can imagine, such limited earning potential leads to other worrisome outcomes. Since nearly 80% of Unitech’s students showed limited financial gains by attending, it’s not surprising that 80% of their student borrowers were also struggling to pay down their educational debt.

When students take out loans to attend an institution, it’s because they believe that school will provide them with an opportunity to better their lives financially. Another way to see if a school is delivering on that expectation is by looking at the loan repayment rate, which measures the percentage of students able to pay down at least one dollar towards their principal three years after leaving that school.10

Last year, we allocated $164 million in taxpayer money to 32 institutions where fewer than one in 10 students were able to begin paying down their loans within three years. We allocated a whopping $15.3 billion to an additional 457 institutions where less than a quarter of students hit that mark. Overall, 1.5 million borrowers attended these institutions, meaning that over 1.1 million now find themselves three years out of school with even more student debt than they had when they left. 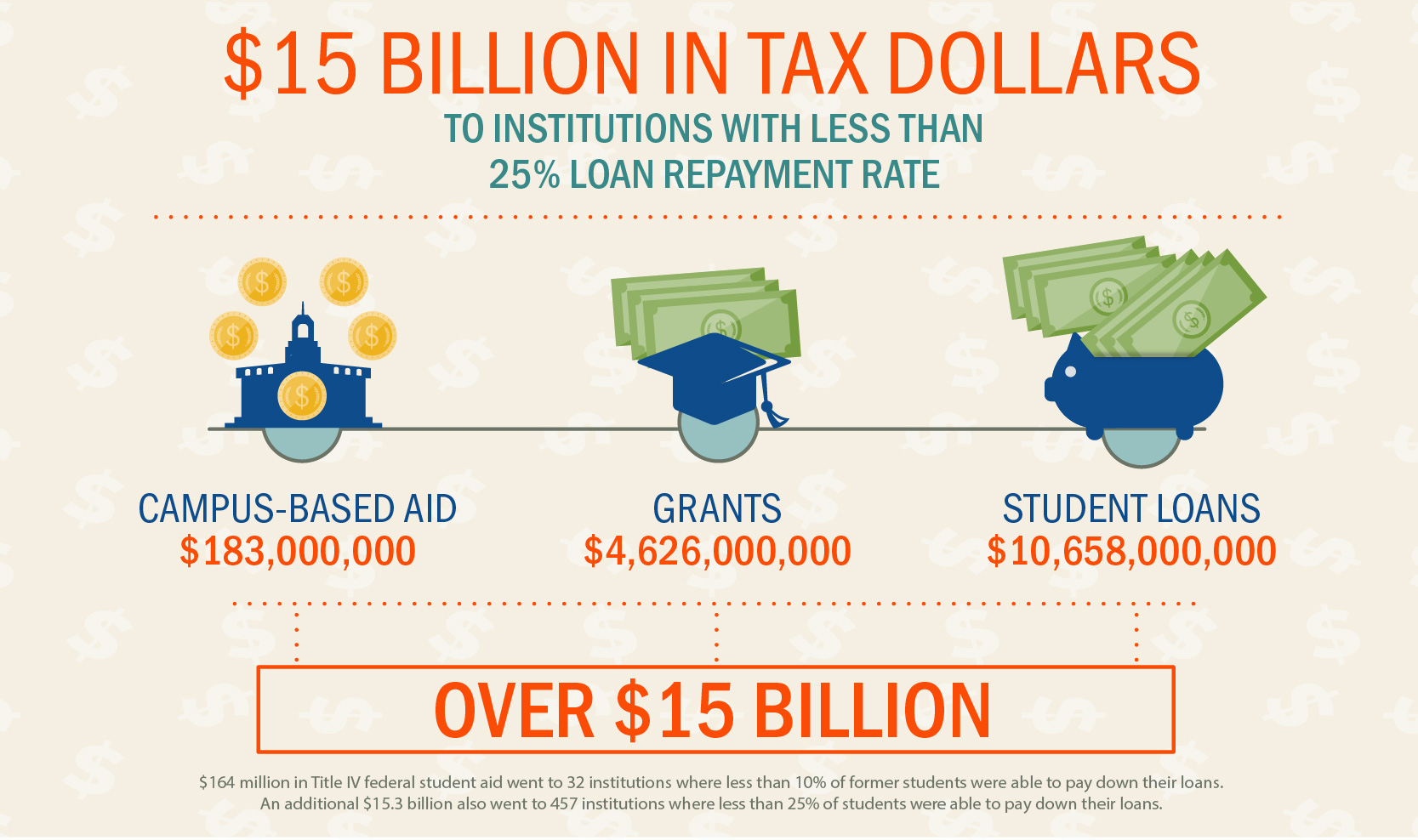 One of these institutions is Henry Ford College, an institution that predominately offers two-year degrees located in Dearborn, Michigan. In 2015, the U.S. Department of Education disbursed over $73 million in federal grants and loans to students who attended this institution. Yet, out of the 9,796 students who borrowed federal student loans to attend this school, only 20% of them were able to begin paying down those loans within three years of leaving. And only 6% of the school’s first-time, full-time students graduated in 2015, so it is likely that many students who left with debt were also degreeless—the worst case scenario for students and taxpayers looking to avoid default on their loans.11

Each year, American taxpayers send billions of dollars to higher education institutions that leave students degreeless, underemployed, and unable to repay their loans. With billions on the line, not to mention students’ futures, it’s imperative that taxpayer-funded financial aid goes to institutions that actually serve students well. Just as college students who don’t maintain a certain grade point average risk losing access to scholarship funds, colleges must also be held accountable for how well they perform and educate students, especially when they are receiving huge checks from the federal government to cover their costs. We’ve got to make the system work better to protect taxpayer dollars and, most importantly, to ensure students who choose to further their education are getting a good value for their investment. Better bets will equal better returns, both for students and for taxpayers.