New research shows that 10 million working-age Americans have families that spend more than 5% of their household income on medical bills for two years in a row. When paired with costs of insurance, health care is taking a total of 14% to 15% of their income. These working-age Americans are also more likely to have lower incomes, be older, have more chronic conditions, and live in the Midwest.

Patients with chronic health conditions often have large out-of-pocket costs even when they have insurance. The Affordable Care Act (ACA) helped many obtain and afford health insurance coverage and capped the annual amount people must pay out-of-pocket. However, those caps are set too high for many people—especially those with costly medical conditions who face high costs year-after-year. The burden of such persistent high costs is especially acute for people with low to middle incomes.

Our new research shows that 10 million working-age Americans have families that spend more than 5% of their household income on medical bills for two years in a row.1 For a family with a median income of $84,370 in 2022, that cost is an average of $5,950 each year.2 Their out-of-pocket costs are in addition to $6,106 in average premiums for employment-based coverage or $6,830 in average premiums for standard coverage in the ACA insurance exchanges.3 That means health care takes a total of at least 14% to 15% of their income, which is about as much as the cost of housing.4 According to our research, they are also more likely to have lower incomes, be older, have more chronic conditions, and live in the Midwest.

To better support individuals with chronic conditions who routinely spend a large percentage of their income on care, Third Way has proposed capping their costs.5 A cost cap limits how much each person would spend for insurance premiums and out-of-pocket (OOP) for deductibles, copayments, and coinsurance based on their income. To show who would be helped from a cost cap that protects people with chronic conditions who have high costs for one or more years, we looked at working-age people (ages 18-64) with OOP spending that exceeds 5% of family income over two years. The data comes from the federal Medical Expenditure Panel Survey, which follows people over two-year periods.6

The research shows the demographic factors behind the OOP cost burden for people with a single year of high costs and those with persistent high costs over two years. Key findings include:

We unpack these findings more below with the stories of two families who are representative of the financial challenges facing millions of Americans with high health costs.

Stacey Armato, a 41-year-old mother of three in Hermosa Beach, California, has a 6-year-old son, Massimo, with cystic fibrosis, which causes lung damage. Massimo takes about a dozen medications, costing thousands of dollars each month. Fortunately, their insurance limits their total spending on Massimo’s care to about $6,000 a year. While this coverage is better than the current standard for coverage under the Affordable Care Act, it is not enough for their financial security.7

The Armatos’ high OOP costs represent a problem for people at all income levels. Unfortunately, the high OOP cost burden on the Armatos is not rare. Assuming their family earns $84,370, the median family income, and they purchase their coverage through the ACA exchanges, their insurance policy’s OOP limit is well below the $13,900 permitted for family coverage under federal law. Nonetheless, their expenses on Massimo’s care exceed 7% of the family’s income annually, and they must pay this amount year-after-year. The Armatos are not alone. As shown in the chart below, 5% of people in families earning from two-to-four times the federal poverty level ($46,060 to $92,120 for a family of three in 2022) face persistent high OOP costs two years in a row. High OOP costs also present challenges when they arise within a short period of time and more people confront this challenge. Over three times as many people in families with incomes within this range face one-time high OOP costs over one of the two years. 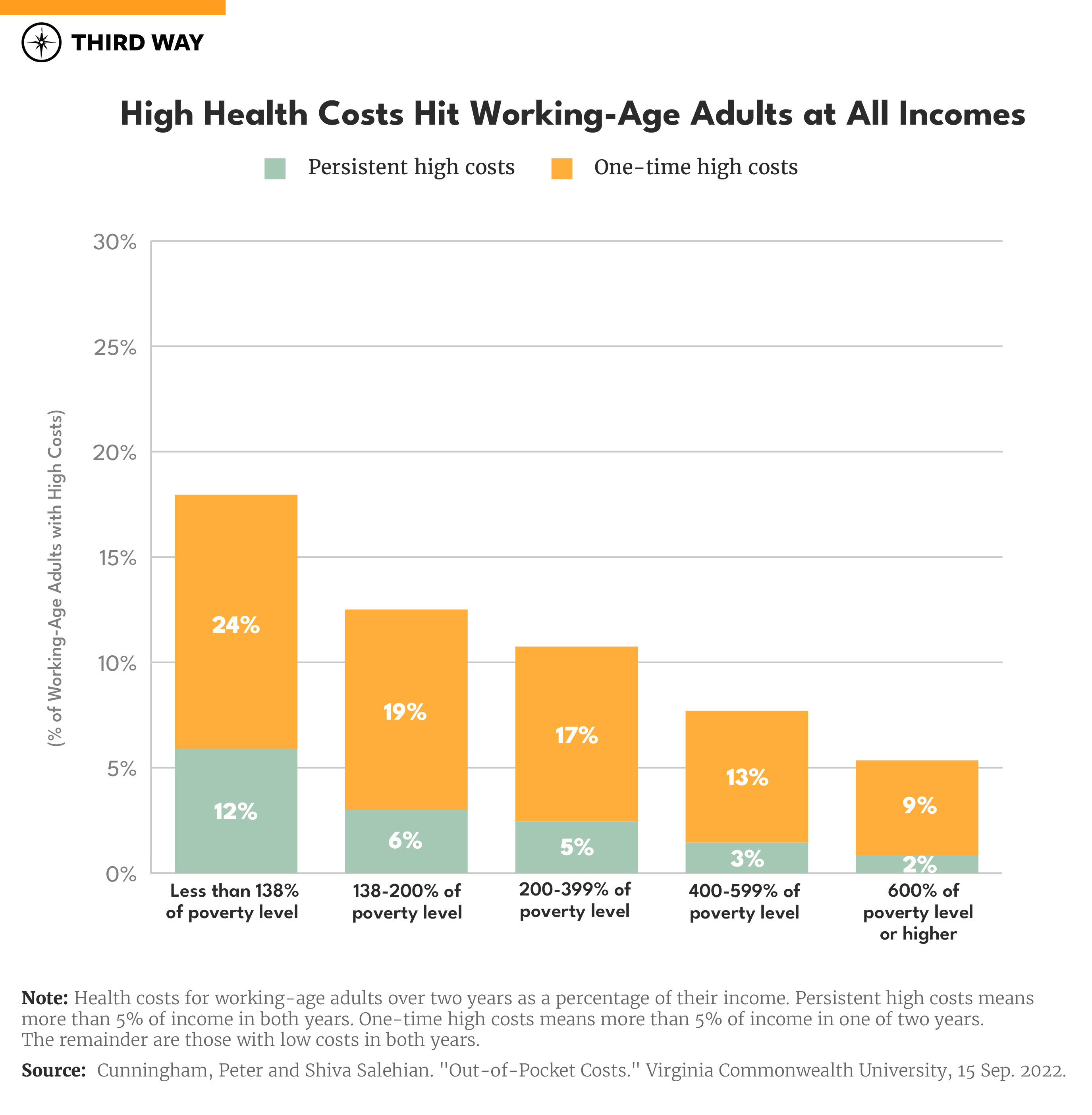 Families with lower incomes face a greater financial burden from high OOP costs. Twelve percent of the people in families with persistent high costs and low incomes qualify for free coverage through Medicaid, but they may not be enrolled, or they may live in one of the 12 states that has not expanded Medicaid to include them.8 Twice as many low-income families face high OOP costs within a year. Even families with higher incomes can face high OOP costs. Three percent of people in families earning from four-to-six times the poverty level ($92,120 to $138,180 for a family of three in 2022) face persistent high OOP costs, and 13% have one-time high costs in one of the two years studied. 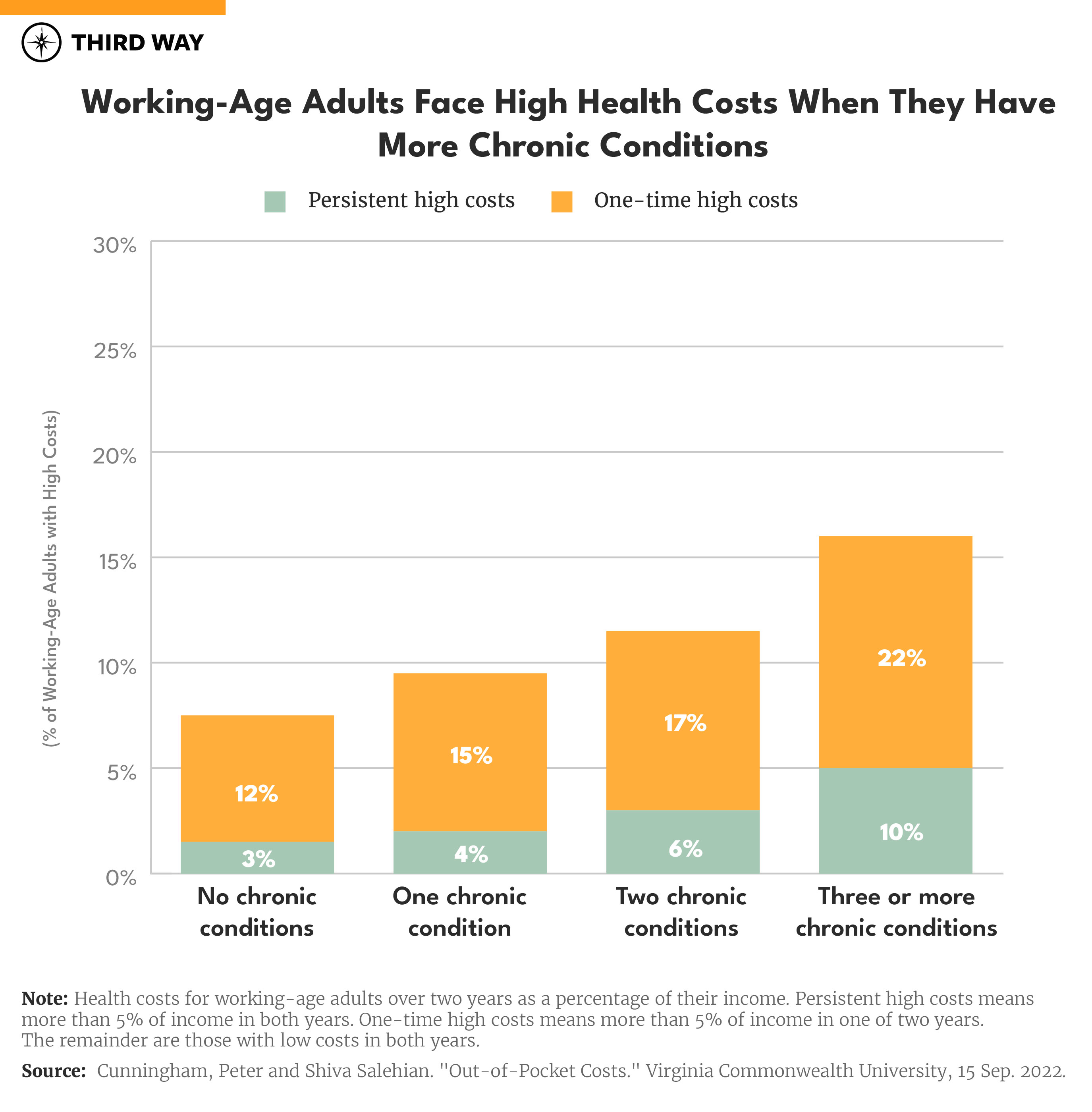 Jaime Lyn Moy of Waterford, Michigan and her son, Andy, have psoriasis and psoriatic arthritis. 10 Psoriasis is severe skin rash that can lead to arthritic pain in the joints and swelling.11 Jaime notes that “Andy has been through a lot. When his psoriasis flares, he is covered head to toe with burning, itching and pain. The psoriatic arthritis affects his joints, especially his spine and hips. Between the two of us, the out-of-pocket costs for our quarterly injections are almost $4,000…. Having to find over $10,000 every year to afford the biologics that keep us healthy and keep my son out of a wheelchair is unimaginable.” Their costs are affordable through a copay assistance program, which is typically sponsored by the pharmaceutical industry.

The Moys’ fate, like millions of others, is in the hands of a complex coverage system. The Moys might be able cover their costs now, but the copay assistance program could end suddenly, or they could have other costs for which they would still have to pay a deductible or other OOP costs. Laws and health plan rules determine whether such copay assistance counts toward a patient’s OOP cost requirements. They could be liable for up to $17,400 in OOP costs under a silver level plan sold on the health insurance exchange. If that happened, they’d have to suffer the consequences of going without the biologic therapy because Jamie says they couldn’t afford it. Four-in-ten adults in the United States delay or go without health care each year because they can’t afford it.12 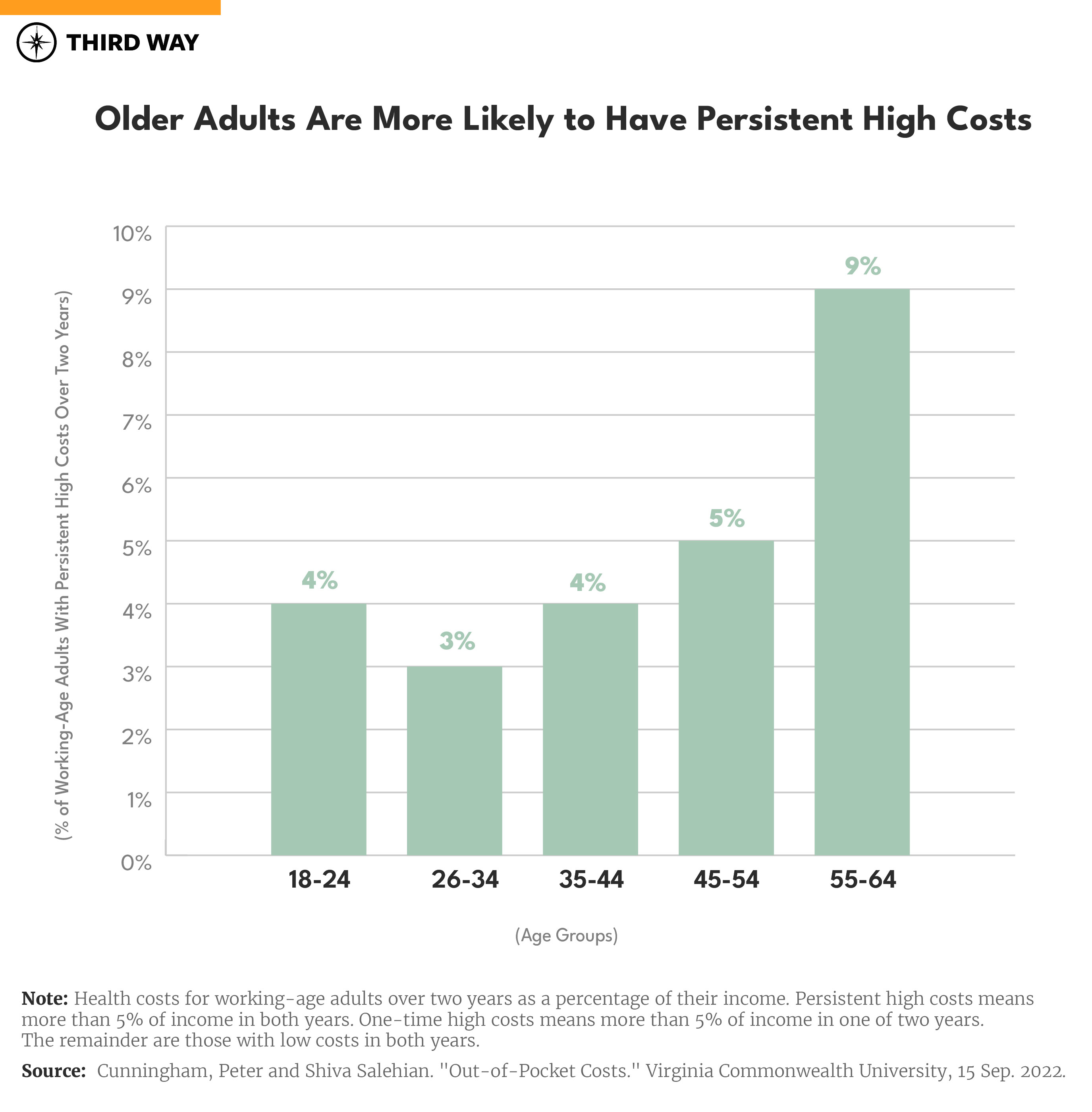 High OOP costs afflict all racial and ethnic groups. White people have the highest rate of persistent high health costs at 6%, compared to 3% for Black and Hispanic people and 2% for Asian people. For single year high costs, white people have a rate of 17% compared to 14% for Hispanic people, 13% for Black people, and 11% for Asian people. The fact that the data don’t show inequity for minority populations may be misleading and obscuring the full picture. Inequities regularly occur with access to care, and it is not clear what the impact on OOP costs would be if access to care were equitable. 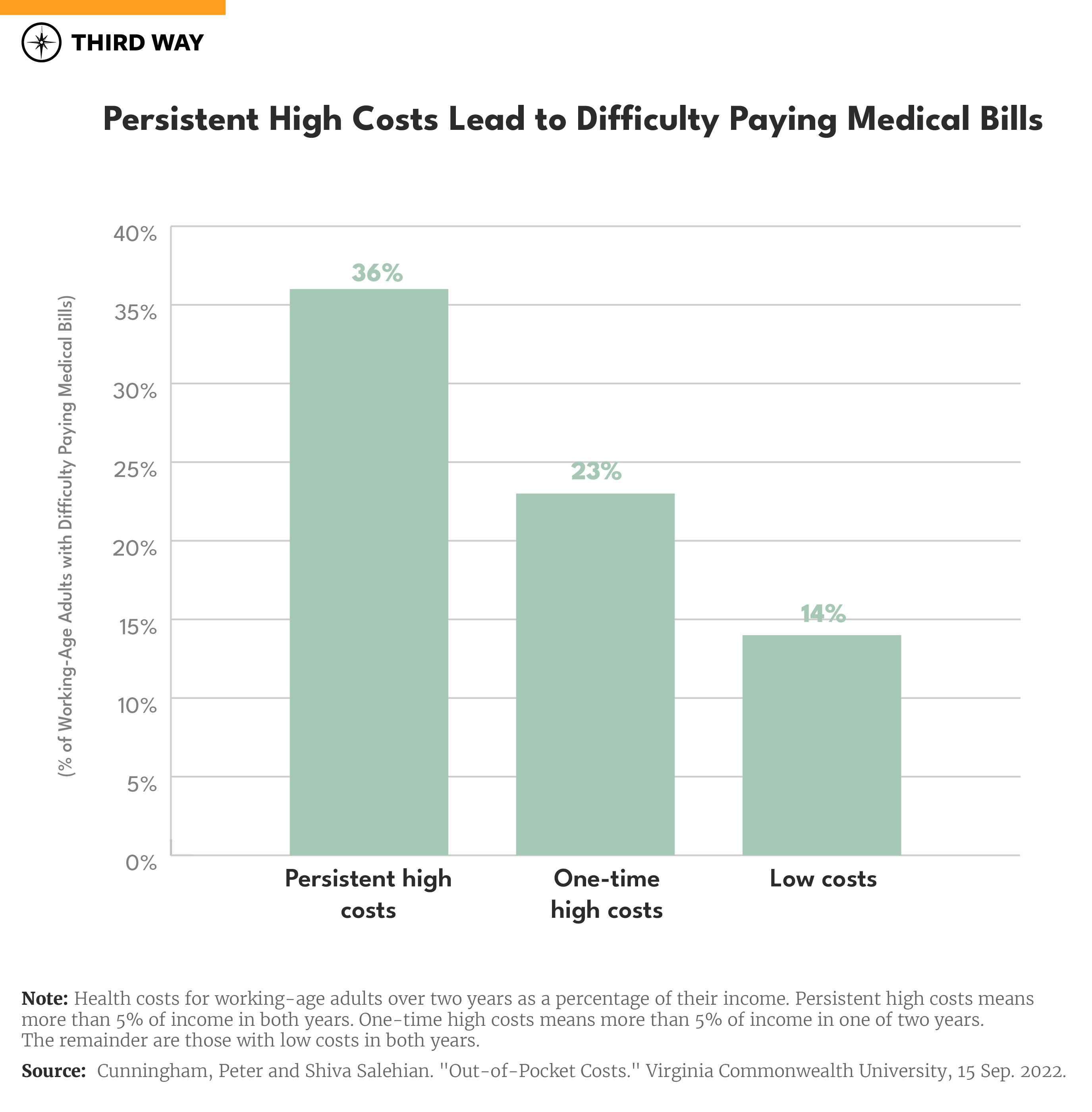 The 6.7 million working-age Americans with persistent high OOP costs reveal a major gap in coverage protections. The nation needs a universal cost cap that includes protection for people who face high costs year after year. A cost cap that spans multiple years as Third Way proposes would help end the unfair demographic variation in costs for people based on their income and health costs.

Virginia Commonwealth University researchers, Peter Cunningham and Shiva Salehian, analyzed data from the Medical Expenditure Panel Survey.13 They conducted a longitudinal analysis using data from 2015 to 2019. A complete set of tables are available to be downloaded here.