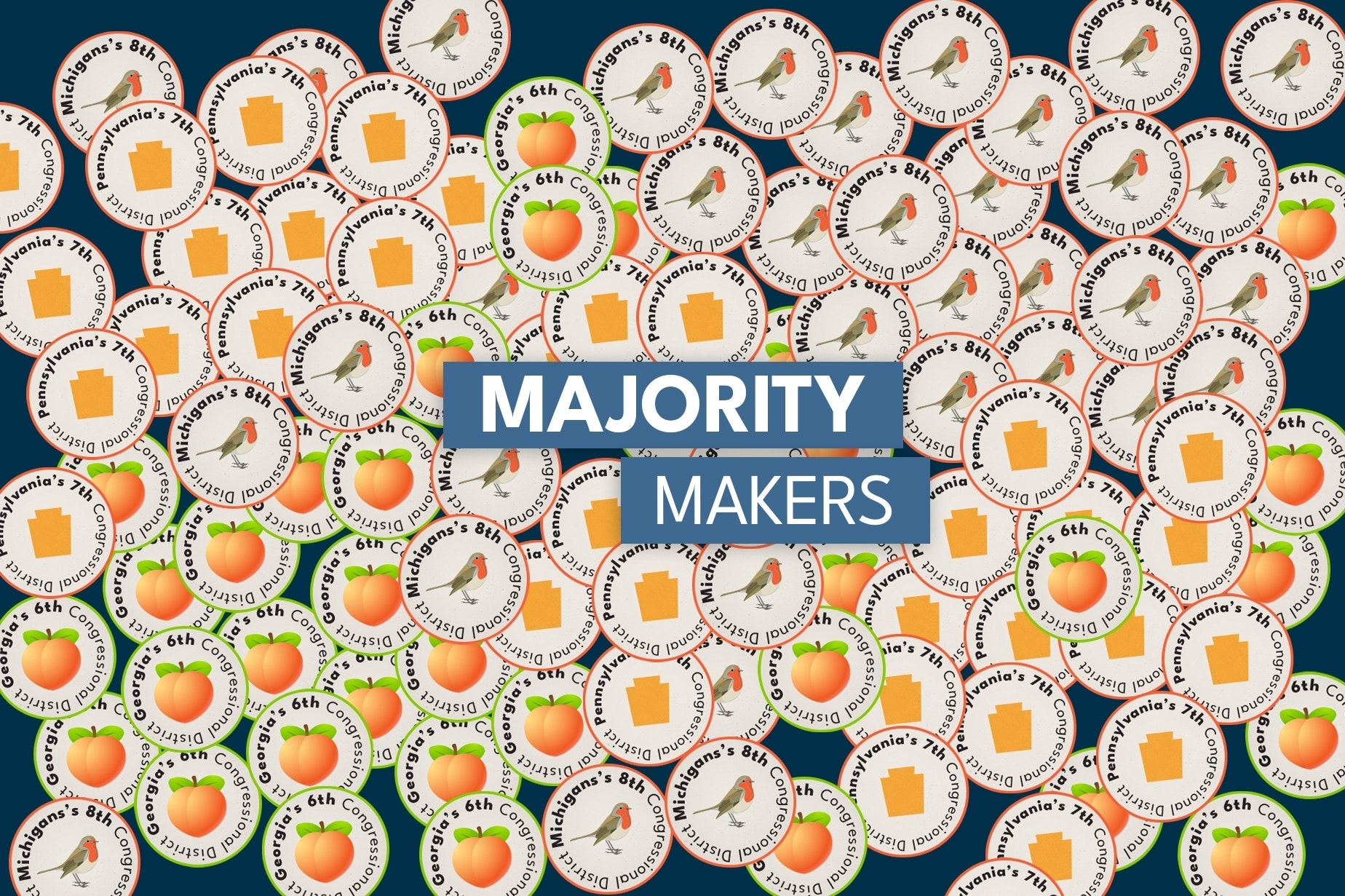 Majority Makers is an ongoing series zeroing in on Congressional districts that have flipped, or come close to flipping, since 2016. Some flipped both up and down the ballot, while others split their results. Some became more favorable towards Democrats, some less so. By looking closely at these districts, we can better understand trends in voting behavior, who gave Democrats their majorities, and what they should prioritize to deliver on their promises and build on their strengths in the midterms.

This profile will focus on Arizona’s 6th congressional district. Arizona’s 6th encompasses parts of Maricopa County, including most of Phoenix’s northeastern suburbs.

Arizona’s 6th district is the wealthiest in the state, and in fact it is one of the wealthiest districts in the nation. Residents here are highly college educated and older than the general electorate, as the region is a popular area for retirement. Fittingly, therefore, it was a longtime Republican stronghold: Republican Representative David Schweikert won his elections in 2012 through 2016 by an average of 27 points. During the Trump era, however, the district shifted leftward. In the 2020 election, Democrats nominated a strong challenger, Hiral Tipirneni, and polls showed Democrats favored with seniors, college-educated voters, and more affluent voters. Political prognosticators kept a close eye on the district to see if it might flip to blue in 2020.

Arizona’s 6th is a high-turnout district, and its dramatic evolution during the Trump era indicates that it contains some of those elusive swing voters. The direction that Arizona’s 6th (and the areas contained within it that also deeply impact the politics statewide) trends in 2022 will be a key indicator for the lasting effects of the Trump era in our politics. And looking at how electoral debates played out in the district may help Democrats see a way to appeal to these swing voters without abandoning working-class and more diverse voters in other parts of the state and country.

Arizona’s 6th district falls within Maricopa County. It stretches from Cave Creek and Carefree south to the Salt River Reservation, near Tempe. It covers many of the northeastern suburbs of Phoenix, including Scottsdale, Paradise Valley, Cave Creek, and Fountain Hills. These suburbs are largely white and relatively older. While the district has a sizeable Hispanic population, it is much less Hispanic than Maricopa County as a whole.

The district stands out in Arizona because of its wealth, its uniquely high share of college-educated voters, and its large share of managerial workers. Meanwhile, it has one of the smallest shares of people who work in government. Its top industry is tourism, and the city of Scottsdale ranks near the top in the United States for the number of AAA Five-Diamond hotels and resorts. Scottsdale is also a top destination for medical care because of a major Mayo Clinic campus housed in the city.

The district has been home to a range of prominent Republican Arizona figures and politicians, including Doug Ducey and Barry Goldwater.

And yet, in 2018 and 2020, Democrats came shockingly close to winning this once deep-red district. Kyrsten Sinema came within two points of Martha McSally as she won by two points statewide, and Joe Biden came within four points of outperforming Trump here in 2020.

In the last election, wealthier and more highly educated voters trended towards Democrats nationally. Changes in places like Arizona’s 6th district contributed to Democratic wins in Arizona that were essential to winning the presidency and Senate. But Democrats could not quite pull off a victory in the district.

At first glance, it looks like a classic Romney district that turned its back on the GOP during the Trump presidency. And yet, Republicans managed to hang on at the congressional level, despite significant defections.

What about Arizona’s 6th district made it just out of reach for Democrats, even though it seemed demographically favorable in the Trump era? With Trump gone, will it revert to its ruby-red voting patterns of the past? And do Democrats need to maintain some strength in this district, appealing to these wealthy voters, to maintain their newfound strength in Arizona? Can they do so without leaving working-class voters elsewhere behind? 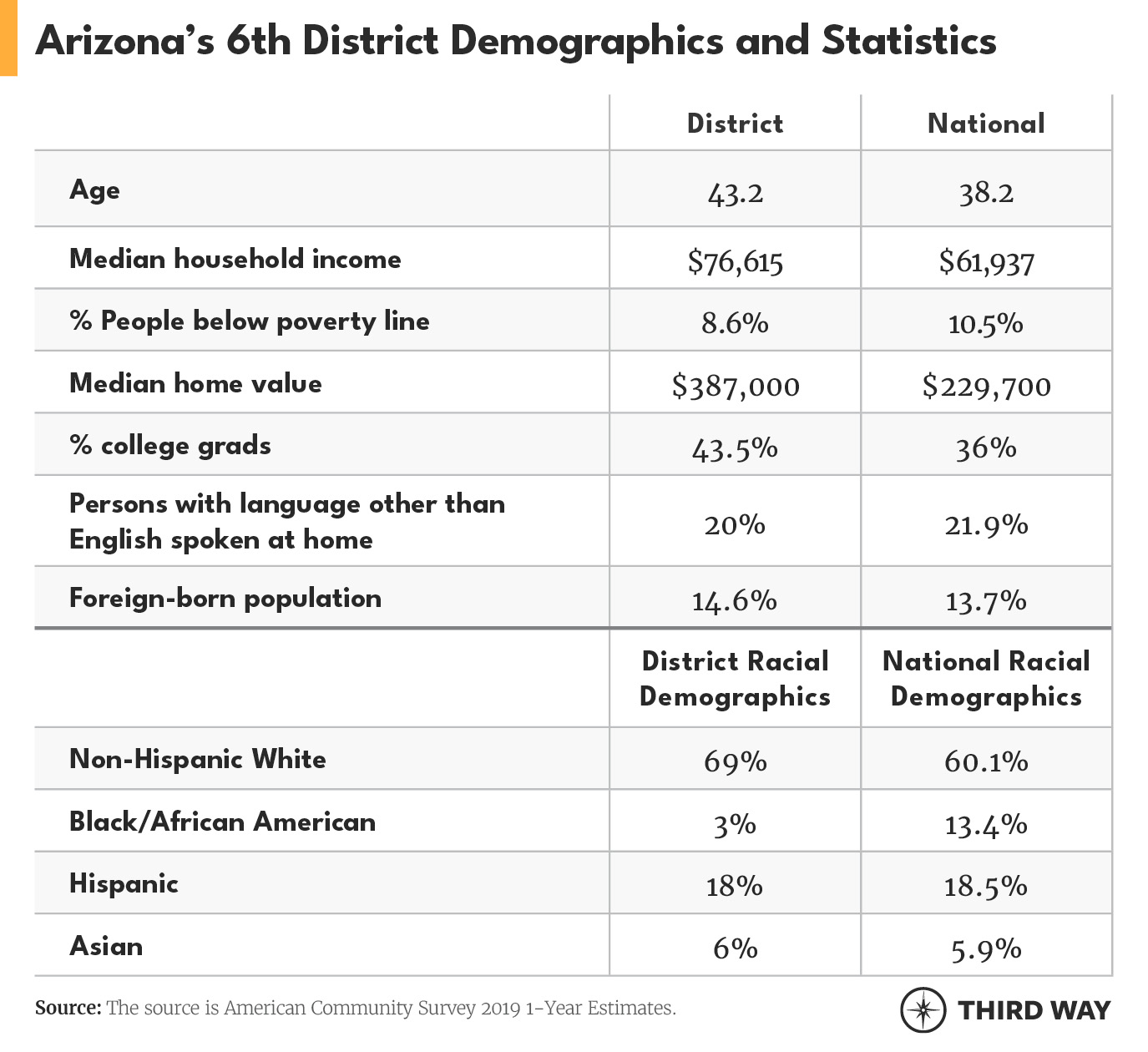 The district is also older on average than the country as a whole, with a mean age of 43, compared to the national average of 38. This is because of the large share of retirees and “snowbirds” who have relocated to the district.

The district is about two-thirds white, but it has a significant share of Hispanic residents, at about 18%. However, it is much less Hispanic than Maricopa County as a whole, which is just under 30% Hispanic. While the Phoenix area is diverse, it is clear that wealthier and whiter residents have flocked to Scottsdale, Paradise Valley, and other suburbs in Arizona’s 6th district.

The demographics of the district have conflicting implications for its politics. College-educated white voters nationally gravitated towards Democrats in 2020, with Joe Biden winning 51% with these voters to Trump’s 48%, and Biden and Trump were tied among voters with a household income over $200,000. At the same time, the area is known for its pro-business climate, low taxes, and lax regulation. While Trump likely turned off many of the highly educated and affluent voters in the district, they remain fiscally moderate or even conservative at their core. 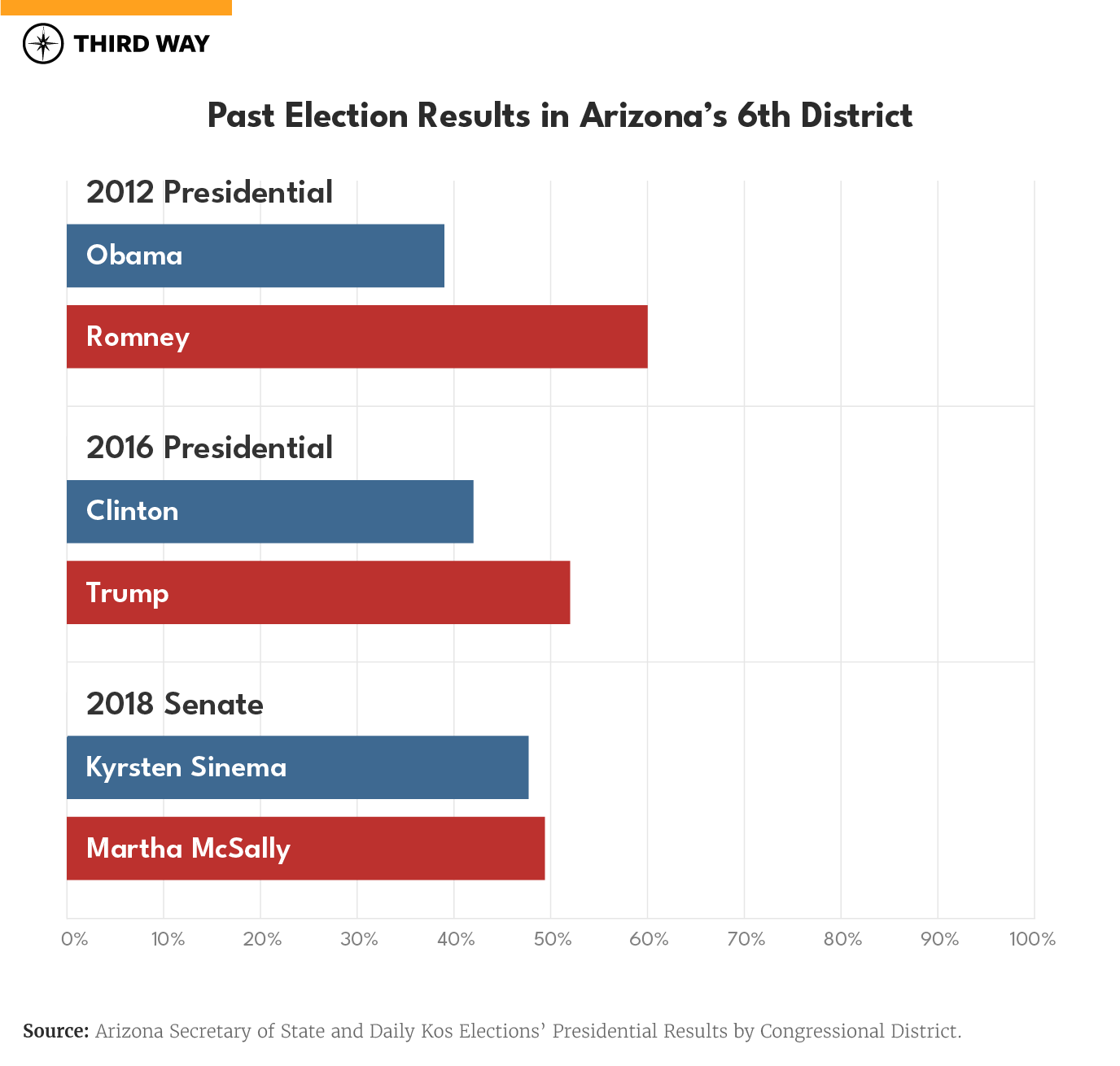 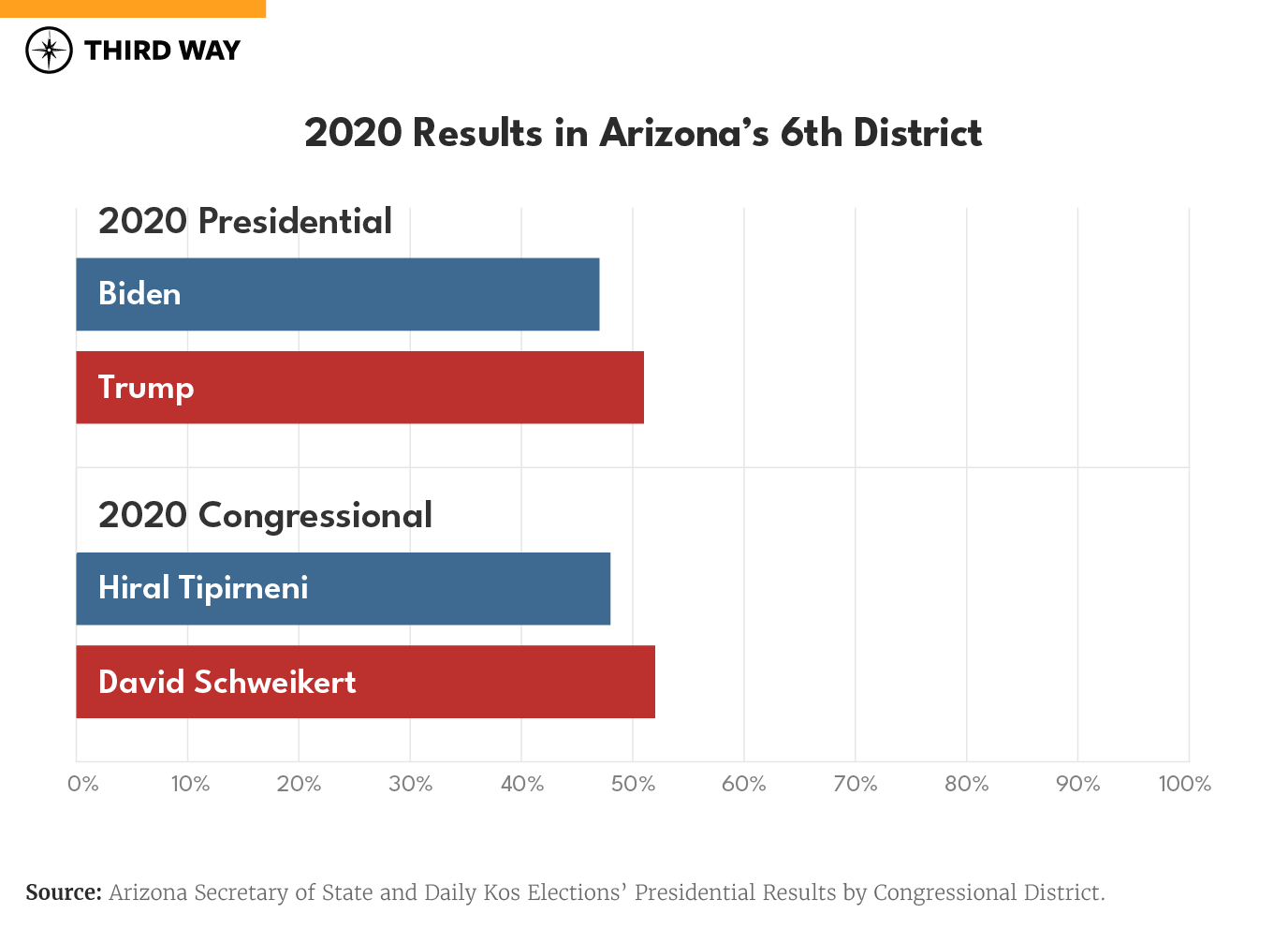 Republicans had at least a twenty-point advantage in the 6th district for decades prior to the Trump era. As noted above, George W. Bush, McCain, and Romney each beat their respective Democratic opponents by over 20 points.  At the congressional level, Republican Representative David Schweikert won his elections in 2012, 2014, and 2016 by an average of 27 points.

Unlike other affluent, historically Republican districts that shifted to Democrats in the Trump era, Arizona’s 6th backed Trump by ten points in 2016. This wide margin indicates that the district is different from a place like Georgia’s 6th district, whose affluent and highly-educated voters dramatically swung towards Democrats from 2016 onwards. Instead, as the Trump presidency progressed, voters in Arizona’s 6th finally began to turn away from the Republican Party. In 2018, Kyrsten Sinema came within two points of Martha McSally in the district, by far the district’s closest result in decades. In the same year, Schweikert beat his Democratic challenger by 10 points. But the narrow Senate result put the district on House Democrats’ radar.

In the 2020 cycle, Democrats recruited a strong challenger in Hiral Tipirneni to challenge Schweikert. Tipirneni is an immigrant and Indian-American woman, who worked as an emergency room doctor for ten years prior to running for office, and was inspired to run for office by Trump’s election and by Republican efforts to repeal the Affordable Care Act. Tipirneni had also run once before in the neighboring 8th congressional district and was a known quantity to many voters. This time, Schweikert was even more vulnerable due to an ethics investigation. Yet Republicans won the district again despite polling showing a highly competitive race and Cook Political Report ranking the race a “tossup.” Schweikert won reelection by five points, and Trump won the district by four.

Schweikert is a conservative and pro-Trump Republican who is a member of the Freedom Caucus and voted not to certify the 2020 election results. In the 2020 campaign, however, Schweikert attempted to cast himself as a pro-growth Republican focused on solving problems rather than stoking culture war battles. Meanwhile, Tipirneni leaned heavily into her background as an emergency room doctor, and she prioritized health care in her campaign.

In an interview with both candidates, Schweikert stressed that his priorities were economic growth, lower taxes, and a safe community. He stated his three goals for the coming term were retirement security, Medicare protection, and economic growth.

On Covid-19 restrictions, he sought to strike a middle ground between public health safety and reopening the economy. He said Covid-19 safety is important, but so is “economic survival, wanting to get back to normal, having your children back in school safely, but back in school.”

Schweikert also used an evasive, technocratic answer to mask his vote to repeal the Affordable Care Act, which was a primary point of attack for Tipirneni. Rather than directly addressing his vote, he talked about how health care is too expensive and bringing costs down, likely tapping into concern in the district about health care costs without explaining how he might address the issue.

Tipirneni framed herself as a practical moderate focused on getting things done. She centered her campaign around health care, including her experience as an emergency physician, Schweikert’s vote to repeal the ACA, and the need for public health measures to safely navigate the Covid-19 pandemic. She also talked about supporting small businesses through the pandemic throughout her campaign.

Tipirneni talked openly about her personal experience as a first-generation immigrant to the United States and used that experience to explain her stance on immigration. She struck a moderate position on the issue, emphasizing the need to protect DREAMers as well as enhancing border security, while talking about the pride Arizonans feel in their state’s diversity. She also used immigration reform as an example of something important that needs to get done in a bipartisan fashion but has not been accomplished yet because of the dysfunction in Washington.

Tipirneni’s moderate and practical stances surely helped her strong performance in this tough district. She nearly tied Joe Biden in the district, unlike many Democratic candidates in congressional races who ran several points behind him (particularly challengers). Her focus on good governance and getting things done in a bipartisan fashion may have resonated with voters fed up with Schweikert’s corruption allegations and the overall dysfunction in Washington during the Trump era.

At the same time, Schweikert likely benefited from his focus on reopening and strengthening the economy, particularly in this district with many industries directly impacted by the pandemic, like hospitality. According to exit polls, 34% of Arizona voters said their top voting issue was the economy. The coronavirus pandemic was a fairly-distant second, at 21%. While Tipirneni also talked about the importance of reopening small businesses, Schweikert’s laser focus on the economy and reopening likely benefited him with economy-focused voters. While the pandemic and health care generally were major concerns and helped Tipirneni draw close, she eventually lost out in this fiscally moderate, business-friendly district.

As the longtime party of the working class, Democrats may scoff at appealing to a wealthy, largely white district like Arizona’s 6th. And it may well be that with Trump out of office, the district returns to its solidly Republican voting patterns. But in a state with razor-thin margins like Arizona, and with the similarly thin margin of their majority in the House, Democrats cannot afford to lose ground anywhere.

A possible remedy to this conflict is for Democrats to zero in on a strong economic platform and to talk about that platform constantly. While Democrats will not share Schweikert’s low taxation economic policy agenda, they can only benefit from talking about the economy more and showing voters how Democratic policies lead to prosperity, and Republican policies historically have not. While the richest districts in the country should not dictate Democratic priorities, to maintain their success in tough states like Arizona, Democrats need to win, or at least pull to a draw, on the economy.