Biden-Like House Candidates Beat Those to Their Left

In fact, leftwing nominees lost more than double the amount of support than moderate Democrats on average compared to Biden, due to some combination of ticket-splitting and under-voting.

Generally speaking, House Democratic incumbents did better compared to Biden than non-incumbent candidates. All seven Democrats who won Trump districts were incumbents who had been able to build their own brand. The challengers struggled to build this same kind of personal brand and ward off attacks. But looking at non-incumbent House Democratic candidates by ideological group—moderates on one hand and leftwing candidates on the other—it becomes clear that leftwing candidates paid an electoral price more severe than moderates.

For purposes of this analysis, we defined leftwing candidates as those endorsed by at least one of the following far-left organizations: Our Revolution, Justice Democrats, or Brand New Congress. These three groups were founded after Bernie Sanders’ surprisingly strong performance in the 2016 Democratic presidential primaries to move the party towards more far-left policies and rhetoric. They succeeded in electing a handful of House members in safe blue Democratic districts, but not one has proven their theory of politics can work in swing districts, as they have failed to flip a single district from red to blue in either 2018 or 2020.

There were 12 races across the country that featured a Democratic nominee endorsed by one of these groups. Of these, 11 can be analyzed by comparing Biden’s margin to the House Democratic margin, as one candidate (now-Congressman Jamaal Bowman) faced no Republican opponent in NY16. These groups also had two additional Democratic candidates in Democrat-vs.-Democrat general elections that both lost to moderate NewDem Action Fund-affiliated candidates in CA53 and WA10.

These districts spanned from safe Democratic to competitive to safe Republican, so it is also worthwhile to look at them in categories.

Of these 11 candidates, three were in safe Democratic districts where two of the three actually outran Biden: Marie Newman in IL03 and Mondaire Jones in NY17. These were the only two leftwing candidates to outrun the top of the ticket, which unfortunately did nothing to build a Democratic majority as they were already safe Blue districts.

Without factoring in the three safe Democratic districts, including Jones’ and Newman’s overperformances, the eight leftwing Democratic nominees who were trying to flip districts saw an even more substantial underperformance compared to Biden than the average across the 11 districts.

In the eight Republican-held districts, Biden lost by an average of 45.3% to 52.9% or -7.6 points. So it was tough electoral ground. But the leftwing House Democratic candidates lost 40.3% to 57.8% for an average loss of -17.5 points. That is a 9.9-point underperformance by these far-left candidates compared to Biden.

These numbers are a bit distorted due to the inclusion of three unwinnable districts that these groups (Our Revolution and Brand New Congress specifically) decided to support in IL16, TX14, and OH05. But the leftwing candidates in competitive districts, those that made the DCCC Red-to-Blue list, actually did worse relative to Biden.

In the five DCCC Red-to-Blue races where the candidate was endorsed by one of these far-left organizations, the terrain was more favorable. Biden actually only lost these districts by a 49.0% to 49.1% margin on average, which rounds to a 0.0-point difference with Trump slightly ahead. But the far-left House Democratic candidates lost these five districts by an average margin of 43.3% to 53.6%, or 10.3 points. That is a 10.2-point underperformance by these leftwing candidates compared to Biden in their districts. 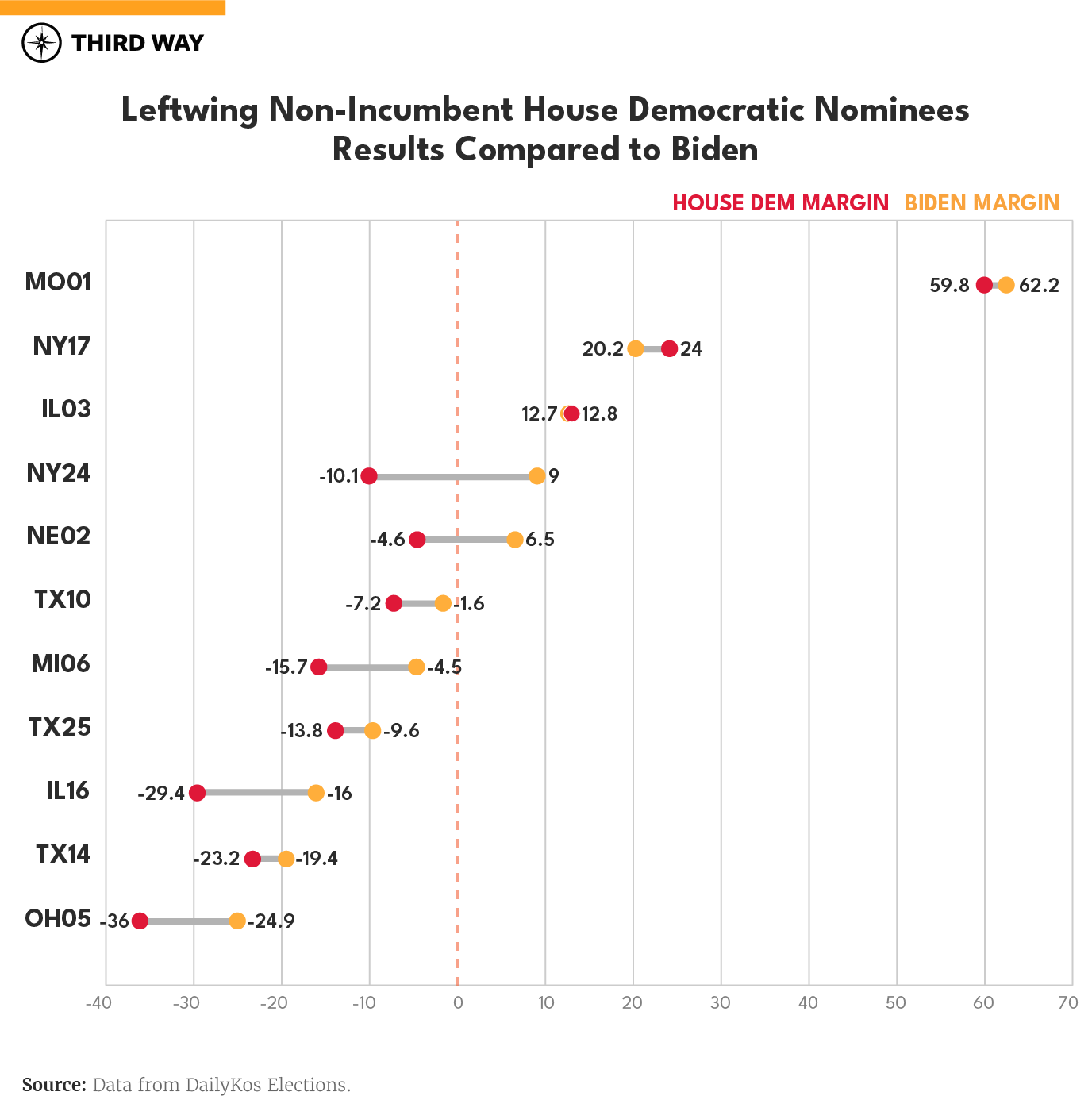 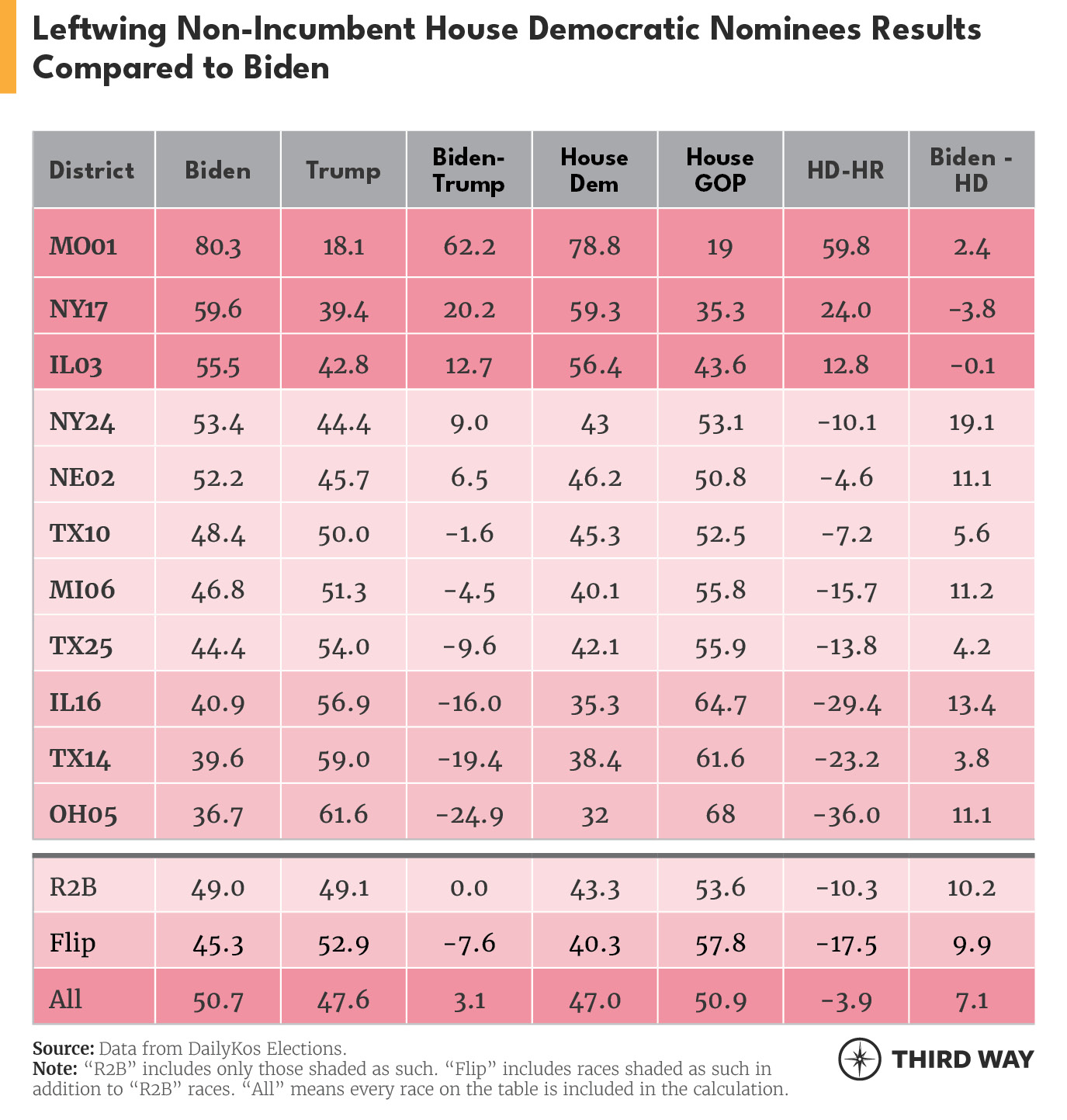 On the flip side, Democratic candidates associated with the moderate NewDem Action Fund did much better than the far-left candidates relative to Biden in their districts.

The NewDem Action Fund had 29 affiliated Democratic nominees that were either formally endorsed or put on their watch list. All of these 29 were trying to flip a district from Republican to Democratic. This group also had two additional endorsed Democratic candidates in Democrat-on-Democrat general elections that ended up defeating leftwing Democrats in CA53 and WA10.

Using a similar metric as above, 26 of these races were DCCC Red-to-Blue races with investment and outside spending. In these districts, Biden lost by 47.4% to 50.9% on average, or -3.5 points. The moderate House Democratic candidates lost by 45.7% to 53.1%, or -7.4 points, in these same districts That’s a 3.9-point underperformance for the moderate candidates compared to Biden. 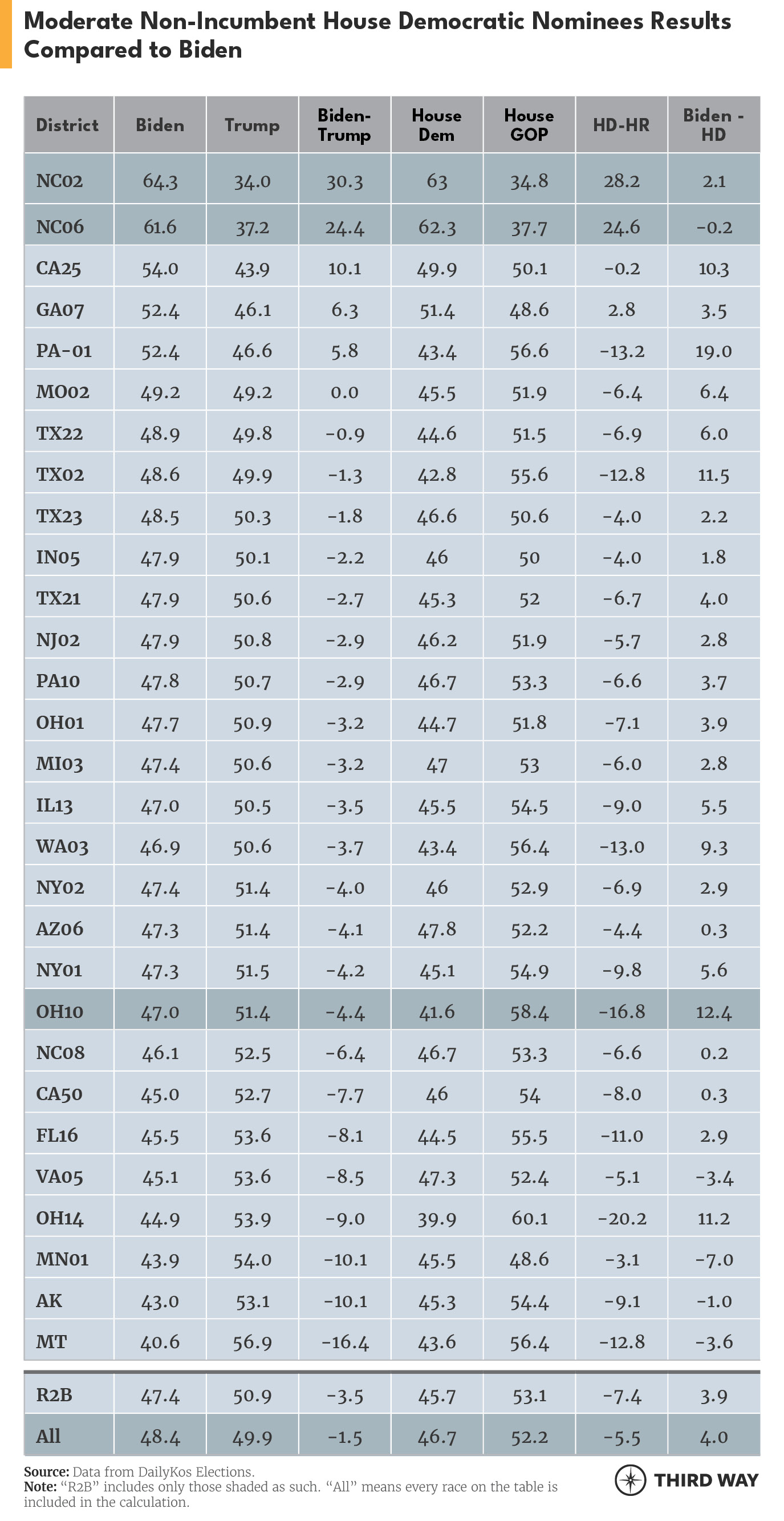 While few of these non-incumbents could build the personal brand necessary to overperform Biden, the more moderate ones were able to better attach themselves to Biden’s performance and, in some rare cases, even do better. Leftwing candidates tended to repel key support from Biden voters who might not share their politics.

It cannot be repeated enough that candidates endorsed by groups like Our Revolution and Justice Democrats failed to flip a single Congressional district for the second cycle in a row—including going zero-for-two in two Biden districts in 2020. Candidates associated with the NewDem Action Fund delivered a Democratic majority in 2018 and provided the only three flips of the 2020 cycle, going three-for-five in Biden districts.

Looking ahead to the 2022 midterms, it is clear that some of the best offensive opportunities for House Democrats will be districts that voted for Biden in 2020.

These districts will probably be concentrated in more moderate parts of progressive states like California, which has independent nonpartisan redistricting, and Illinois and New York where Democrats control redistricting. These are states where the average voter in a swing district is left-of-center of the American electorate but right-of-center of the state electorate and will be looking for a Biden-wing Democratic candidate.

It’s clear that the best strategy in these Republican-held Biden districts is to nominate candidates running as proud Biden-Harris Democrats.