Most of the research on what happened in the 2020 election has focused on the presidential race. This is understandable. It was a democracy-saving victory for the country. Our partner Catalist has a detailed analysis that looks at the electorate in aggregate and the presidential race specifically. This is an invaluable resource for understanding what happened in 2020.

But there are lessons to learn beyond what happened at the top of the ticket. The analysis here draws on voter file data from Catalist to understand what happened in two groupings of Congressional districts last year: districts where mainstream Democratic candidates were on the ballot and others where candidates hewed to the party’s left wing. Candidates were grouped as “mainstream” or “left-wing” based on endorsements from ideologically aligned groups. Only challengers (no incumbents) were included in this analysis. Please reference the bottom of this product for full methodological details.

By the overall results, 2020 was a tough year for Democrats in U.S. House races. Many strong Democratic challengers lost, while incumbents who were thought to be locks had narrow wins or even fell just short of keeping their seats. Ultimately, Democrats were left with a razor-thin majority to defend in 2022.

But new data from Catalist shows that mainstream Democratic candidates across a series of House districts increased their support by six points in 2020 over previous Democratic candidates from the same districts, while left-wing candidates increased their support by less than half a point. Mainstream candidates’ biggest gains were with emerging and enduring segments of Democrats’ coalition, including college-educated voters, Black Americans, and voters under 50. Mainstream Democrats did not win everywhere we’d hoped in 2020, but where they were on the ballot, they gave Democrats their best shot in a hard downballot election cycle.

Mainstream candidates’ relative gains and left-wing candidates’ stagnation offer insights about what happened in 2020 and a model for who Democrats should champion and how they should run in 2022. Candidates from the Democratic mainstream are clearly in the best position to defend the House majority in 2022.

Democrats were not as successful in House races as many expected in 2020. But where they did well compared to 2016, there was almost always a mainstream candidate on the ballot. 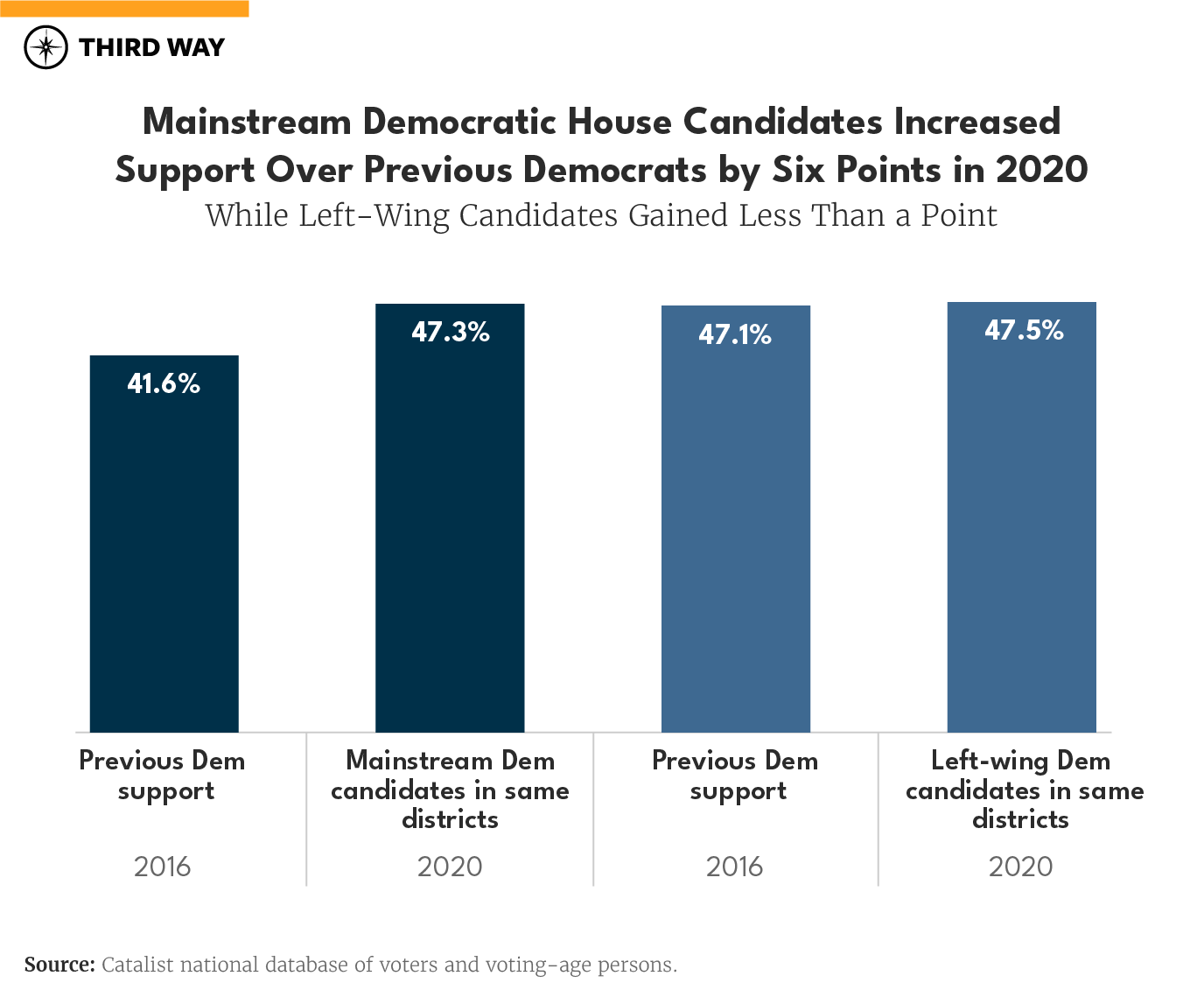 Compared to Republicans’ increasingly monolithic voter bloc, Democrats’ diverse coalition is both a challenge and an opportunity. It can be a precarious federation of voters from different ideologies, races, age groups, and educational backgrounds. But when these voters come together, Democrats can’t be beaten. 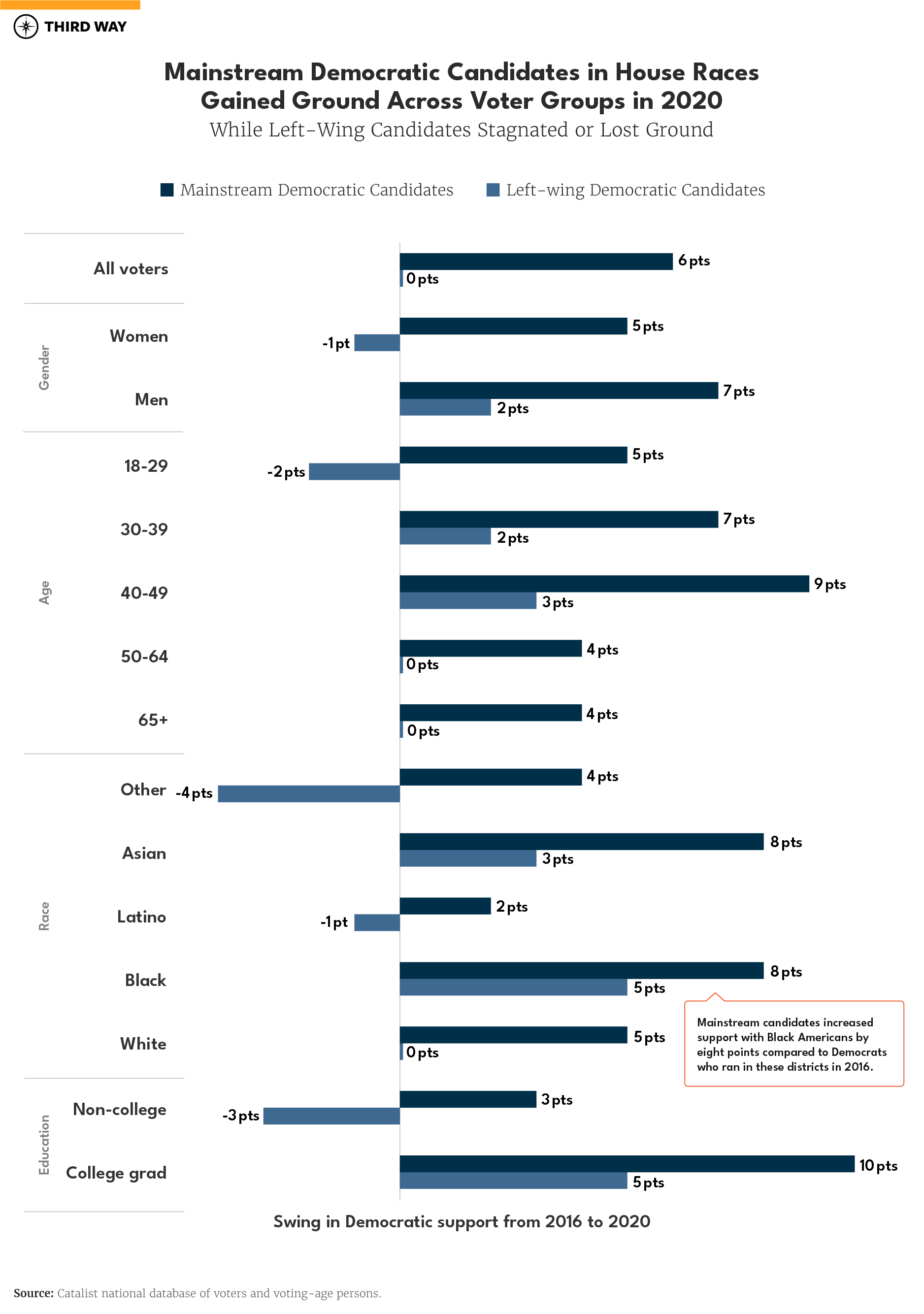 Mainstream candidates’ biggest gain by age was with those in the 40–49 age group, with these voters swinging nine points from 2016. But they also gained five points with voters under 30, while left-wing candidates lost two points with young voters compared to 2016 (and here the data runs completely counter to the accepted wisdom that to appeal to young people we must nominate a Bernie Sanders-style candidate).

Looking ahead, mainstream candidates’ momentum among key groups within Democrats’ coalition is a promising sign as we turn to the 2022 midterm election.

Mainstream Candidates’ Gains Provide Insights About What Happened in 2020 and a Model for 2022.

Mainstream Democratic candidates’ relative gains in House races offer important insights about what happened in 2020, but they also set up a model for how Democrats can protect their majority in 2022. Mainstream candidates are ascendant in House races, and they give Democrats their best shot at holding the chamber next year.

That is why Third Way has established Shield PAC, an organization that will champion moderate and mainstream Democratic House candidates in 2022 and inoculate them against claims that they belong to the “far left.” Shield PAC will deploy paid media campaigns in majority-making House races to help define these candidates as part of the Democratic mainstream and ensure their ideological positioning aligns with the candidates who performed best last time around.

Democrats have a diverse coalition, and it is broad enough to include candidates and voters from across the ideological spectrum. But Catalist’s data highlighted in this analysis makes clear that the Democratic House candidates with momentum right now hail from the party’s mainstream.

Democratic support estimates included in this analysis are based on Catalist data, which includes 15 years of voter registration records, supplemented by large-scale polling, modeling, and precinct-level election results to provide a detailed view of who voted in recent elections and how they voted. All support estimates in this analysis are two-way numbers (Democratic versus Republican).