How to Make Work Pay

Today in America, more than six out of ten people will work hard at their job yet be unable to afford a middle class life. The culprit? There is a widespread opportunity crisis throughout the United States. This lack of opportunity is evident through a severe dearth of middle class jobs, leaving workers without the financial security to pay for health insurance, save a bit for retirement, own a home, take a family vacation, and go to an occasional movie.

As a result, some have called for revolutionary solutions born from the fear that workers will never be able to compete with technology and globalization. These range from a universal basic income for all Americans, working or not, to a federal jobs guarantee where the government hires anyone who wants a job. Yet these ideas have their own issues and don’t address the challenges of re-establishing the middle class.

Everyone running for nationwide office in 2020 needs to confront the opportunity crisis head on. In this memo, we offer a series of options that address wages—making work pay more and increasing the financial security of millions.

The opportunity to earn a middle class life should be available to everyone. However, right now, many people struggle to get by.

Not enough jobs are providing a middle class life. Nationwide, just 38% of jobs pay enough to afford a middle class or better life for a dual income-earning family with children.1 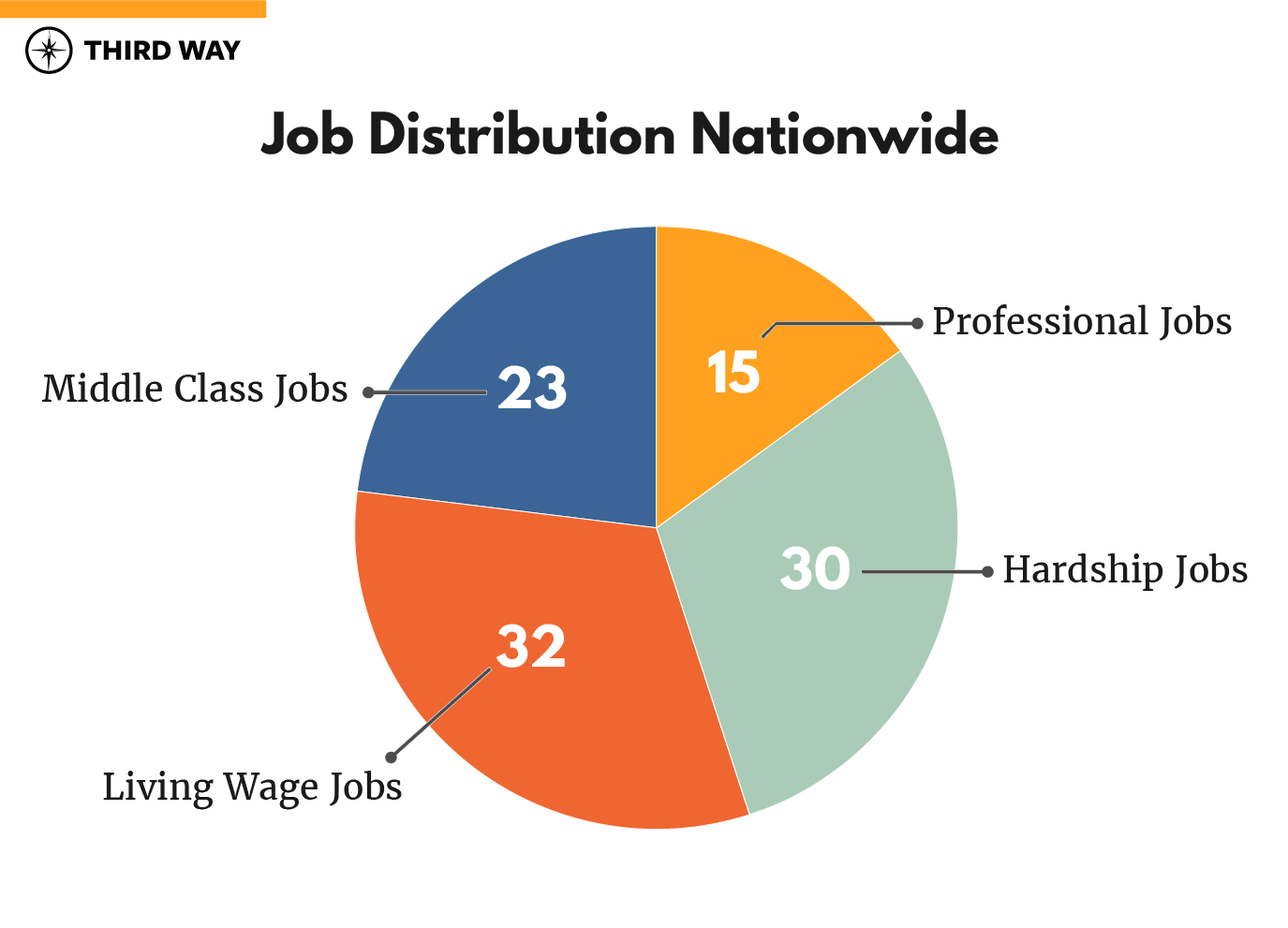 Americans are pessimistic about earning a good life in the future. Our polling shows a majority (51%) think it is getting harder to earn a good life. And this is particularly dark given that 83% of those polled feel stress about their personal financial situation.

Real income has flat-lined for many. After adjusting for inflation, the middle 20% of households’ income in 2015 had approximately the same purchasing power as it did in 2000. Those in the top 20%, however, have seen their income increase by 12.2% since 2000.2

The gender pay gap is large, especially in low-earning professions. The median annual earnings for women in a service occupation is $16,387. Men in the same job sector earn a median of $22,850—nearly 40% more than what women earn.3

The economic recovery has been unequal among groups. Workers with a high school diploma have seen their wages grow more slowly than their peers with bachelor’s degrees. The wages of white earners have mostly increased at a faster pace than those of non-white earners. Full-time workers’ wages have grown by at least one percentage point faster than wages of part-time workers. Workers in jobs considered “low-skill” experienced wage growth as much as two percentage points slower than workers in “high-skill” jobs.4

There is severe poverty across much of America. The ten states with the highest proportion of households earning less than $15,000 annually in 2017 are Mississippi, Louisiana, Alabama, West Virginia, Kentucky, New Mexico, Arkansas, District of Columbia, South Carolina, and Tennessee. The South is vastly overrepresented in this list. Poverty concentration can exacerbate drug abuse, violent crime, and chronic health problems.5

Only half of all workers are earning retirement savings while on the job. As noted in an earlier memo, just 51% of private sector workers are participating in a retirement plan. This includes both traditional pensions and employer-sponsored investment plans like 401(k)s. Only 68% of workers even have access to such a plan.6

Senators Sherrod Brown (D-OH), Michael Bennet (D-CO), Dick Durbin (D-IL), and Ron Wyden (D-OR) introduced the Working Families Tax Relief Act which makes a series of expansions to the Earned Income Tax Credit (EITC) and child tax credit. Specifically, for workers without children, the bill expands eligibility by making benefits open to people aged 19 through 67, and it raises the maximum credit to $2,070. For families with children, it increases the EITC benefit by about 25% (to $7,285 for 2 children), makes the child tax credit fully refundable, and provides an extra $1,000 for each child under 6. In addition, it makes these benefits available monthly instead of at tax time and allows for a one-time $500 advance on benefits.7

The EITC Modernization Act of 2018

Representative Bonnie Watson Coleman (D-NJ) introduced the EITC Modernization Act of 2018, which specifically targets help toward caregivers and adult students. The bill extends eligibility for the EITC to caregivers and students pursuing higher or vocational education and sets a minimum payment of $100 a month ($1,200 per year) for these groups of individuals, allowing them to receive the benefit each month (instead of annually). 8

Elaine Maag of the Tax Policy Center proposed expanding the EITC for workers without children. The proposal and doubles the maximum benefit to $1,038. The enhanced credit would then begin to phase out at the same income as workers with one child. Workers age 21 and older would be eligible to receive the credit. President Obama made a similar proposal9 in 2014 that started the phase-out sooner. 10

Senator Kamala Harris (D-CA) introduced the LIFT the Middle Class Act. This bill would create a refundable tax credit of up to $6,000 per joint filing under $100,000 ($3,000 for single filers earning under $50,000 annually without children and under $100,000 with children). The credit matches every dollar earned up to the maximum. The credit eventually decreases by 15 cents for every extra dollar earned up to the maximum qualifying income. All workers age 18 and over would qualify. 11

We need to raise the minimum wage, and a number of different proposals have been introduced to accomplish that over the years. Among these, Third Way has proposed increasing the federal minimum wage in a way that increases everyone’s purchasing power and minimizes job loss.12 Under this approach, every area of the country gets to a $15 minimum wage, but different places get there at different times based on the cost of living in the area. Every area of the country would be placed in one of five tiers, from low-cost Topeka, KS to high-cost New York City. This regional model has been approved in progressive states like New York, Washington, and Oregon. A similar federal proposal (the PHASE-in $15 Wage Act) is sponsored by Representative Terri Sewell (D-AL).13

In 2015, President Obama proposed a second-earner tax credit based on prior legislation by Senator Patty Murray (D-WA). Two-earner households could claim a 5% credit on the first $10,000 of earnings for the lower-earning worker. This $500 credit would be available to households with $120,000 in total income and phase out by a household income of $210,000. The administration calculated at the time that 80% of two-earner, married couples would benefit from this change. 14