How the Near Death of Caucuses Supercharged Voter Turnout

At this moment, the Democratic Party is uniting around one core issue. Expanding voting rights is universally popular and good governing practice. At every level of government from federal to state to local, Democrats are working on expanding early voting, no-excuse required mail voting, and making registering to vote easier. They are going further by fighting discriminatory laws like photo identification requirements and poll taxes. But one big glaring anti-democratic function remains a core of how Democrats nominate a candidate for president: caucuses.

It has become increasingly evident that caucuses are an impediment to participation and have prevented wide swaths of people from being able to exercise their right to vote. After the 2016 nomination, many state government and state party leaders took it upon themselves to change the way their states conducted their elections. The result has been greater participation and better representation across the board. After seeing this data, there should be no further discussion: the remaining caucuses are undemocratic and need to go.

In the 2016 Democratic nomination for president, nearly 14% of delegates were awarded in caucuses. Fourteen states and four territories used them to award 557 of the 4,051 total pledged delegates available.

If one were to rank the 2016 nominating contests among the 50 states and the District of Columbia by their voting-eligible population (VEP) turnout, then each of the 37 primary jurisdictions all had higher turnout than each of the 14 caucus states.

In 2020, seven caucus states decided to switch to traditional primaries run by the state government.

An additional three state parties created new contests called party-run primaries. These were states where the state government refused to pay for a primary, but the state parties switched from conducting an in-person caucus to allowing people to vote by submitting a verified ballot to the state party.

Additionally, North Dakota switched away from a traditional caucus to a contest called a “firehouse caucus” but it operated like a party-run primary and should be considered as such.

Lastly, Wyoming originally planned to hold an caucus but was forced to change to an all-mail party-run primary operation by the COVID-19 pandemic; however, they did not change the name of their contest. This should also be seen as a party-run primary in everything but name.

Because of that, only 103 delegates were determined in a true caucus contest, so essentially the number of delegates awarded from caucuses was reduced by more than 80%. 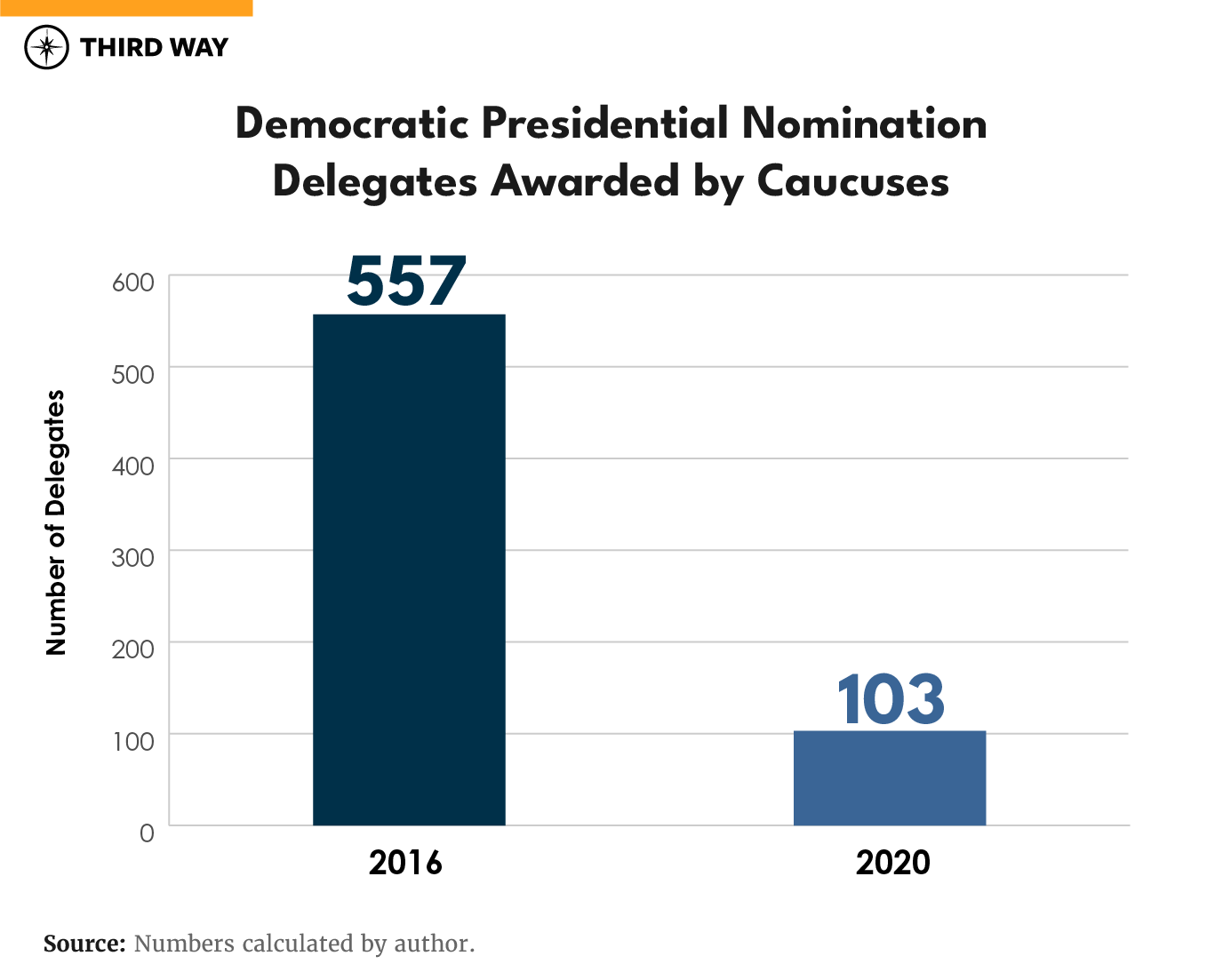 And just like 2016, the remaining caucuses had abysmal turnout compared to primaries despite the increase in interest in the Democratic nominating contests. The lowest turnout primary had a VEP turnout higher than the highest turnout caucus. The primary state of Louisiana had a VEP turnout of 7.9% which beat Iowa’s 7.6%.

Unsurprisingly, when looking at states that increased turnout from 2016 to 2020, these seven states are among the top eight, with only ruby red Idaho and Utah following behind perennial primary state Virginia which came in fifth place.

On the flip side, the two caucus states of Iowa and Nevada continued to lag due to their status as caucus states. They saw their combined VEP turnout only go up by 0.4 points from 5.9% to 6.3%. Despite being the first and third states in the process and getting to go before both the COVID-19 pandemic and Biden becoming the presumptive nominee, the two caucus states lagged both in overall turnout and turnout increase.

It is worth noting that four of the five party-run primaries occurred during the pandemic, and a couple had the majority of their votes come in after Biden became the presumptive nominee. Because of that, it is hard to judge how these contests could play in the future, but they seem to occupy a space that is better than the barriers of a caucus, but still not the same level as state-run primaries.

While party-run primaries may not be ideal, the state parties in Alaska, Hawaii, Kansas, North Dakota, and Wyoming all did the best they could, especially given many of these happened during the -pandemic. On average, these states attempted to mail every Democrat a ballot while also allowing voters to download and print one to send in. By doing this instead of requiring people to give up a Saturday or Tuesday evening to attend a caucus, each state saw an increase in turnout.

Another big success of the party-run primaries was the implementation of ranked-choice voting, so someone who was a big Warren or Klobuchar fan could rank their favorite candidates first before ranking Biden or Sanders second which is a good way to foster participation and unity.

Nowhere was this starker than Hawaii. More people voted in Hawaii in 2020 during a pandemic in a primary that occurred one month after Biden became the presumptive nominee than attended the 2016 caucus when there was no pandemic and Clinton and Sanders were still battling it out.

Having Iowa and Nevada as caucus states still gives momentum and a winnowing ability to caucuses even if they are now close to awarding fewer than 100 total delegates.

This is why the DNC is taking this problem seriously for the next open Democratic presidential nominating contest.

This summer, DNC Chair Tom Perez said “I think by 2024 we ought to have everyone being a primary state.”

The DNC Rules Committee concurs, voting 173-0 to encourage states to continue moving away from caucuses to more inclusive primaries as part of a package of reforms. This was later approved by 98% of 2020 DNC Convention delegates in a 4628-45 vote with 48 abstentions.

The hope is that Iowa and Nevada can look into expanding mail balloting, early voting, and allowing people to vote quickly rather than be forced to attend an event for an extended period, even hours.

There is no excuse for Democrats to use this undemocratic process any longer. 2020 should be the last year that the Democratic Party allows caucuses in the presidential nominating process.

The Democratic presidential nomination process must continue to push forward with a wide swath of inclusive reforms aimed at making sure every potential voter has a right to participate. At the top of that list must be ending caucuses once and for all.