Primary runoff elections are used in seven states, primarily in the American South, but they have a sordid past. They were devised in the South in the late 19th and early 20th Century to help solidify one-party control of the region. Democratic Party bosses wanted something that could help unite Democratic voters ahead of a general election to ensure the Republican Party couldn’t peel off disaffected Democrats while also disempowering Black voters to never be able to nominate someone with a plurality and split White field. As SMU professor Cal Jillson told the Washington Post in 2014, “The primaries were an attempt both to enlarge the group that awarded the nomination, but also to provide an opportunity for whites if they factionalized to come back during a runoff.”1

The traditional two-round runoff system comes with additional costs, including taxpayer dollars to fund the administration of a second election and non-monetary societal costs such as reduced voter turnout in the decisive final round.

Today, the majority requirement for elections is no longer seen as a tool for disenfranchisement. In fact, places in the U.S. which use a modern form of the majority requirement have experienced the exact opposite. Ranked choice voting, or “instant runoff” voting, is also a majoritarian system but it leads to an increase in representation for people of color, both on the ballot and in elected office.2 Past work by FairVote explores the ways in which voters of color and candidates of color benefit from ranked choice voting.3

Primary Runoffs in Texas Can Increase Costs by 50% or More

Four counties in Texas responded to requests for data on election spending. Texas uses runoff elections only for party primaries which do not result in a majority winner during the general election. Costs vary considerably between counties, but overall we can conclude that primary runoffs often cost each county hundreds of thousands of dollars. 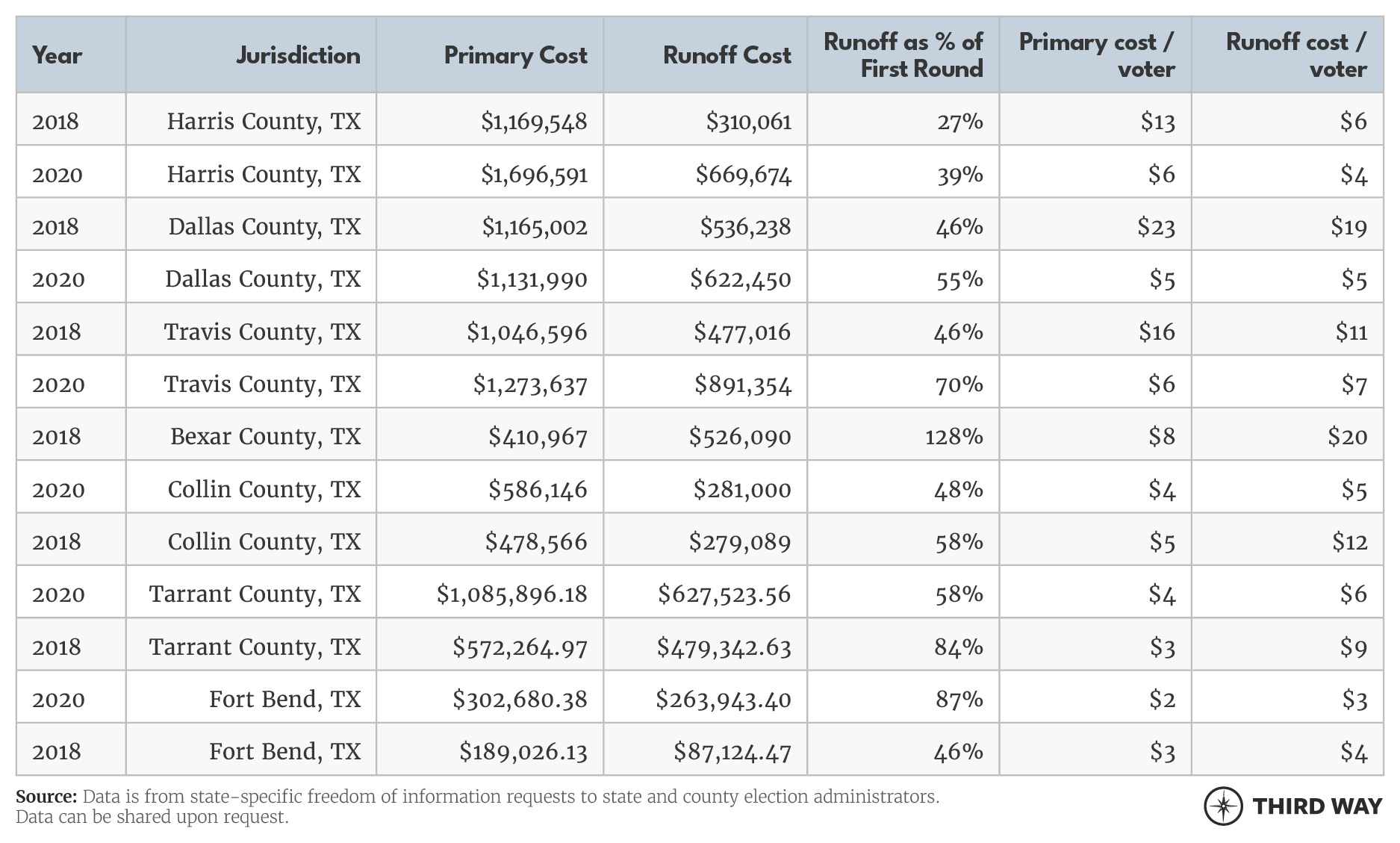 If we extrapolate these costs to every runoff voter in Texas, assuming the median cost of $7 per voter applies statewide, the 2018 and 2020 runoffs could have cost as much as $6M and $11M statewide.

Louisiana’s two-round runoff method is unique in that the first round is treated as a primary, sometimes known as a “jungle primary” because it is non-partisan, and the runoff is treated as the general election. However, from a cost analysis perspective, the duplication of costs is similar to that of typical two-round runoffs.

Each statewide runoff studied cost almost as much as the first round of the election, nearly doubling overall election spending and costing Louisiana taxpayers over $5M each year.

In addition to extra expenses, runoff elections also typically attract a smaller group of voters than general elections. Previous research from FairVote has shown that turnout typically declines by 38% between primary elections and primary runoff elections, with Texas experiencing one of the largest declines at 42%. Turnout for voters of color typically falls at an even greater rate. The table below shows the turnout declines for the elections included in this study. 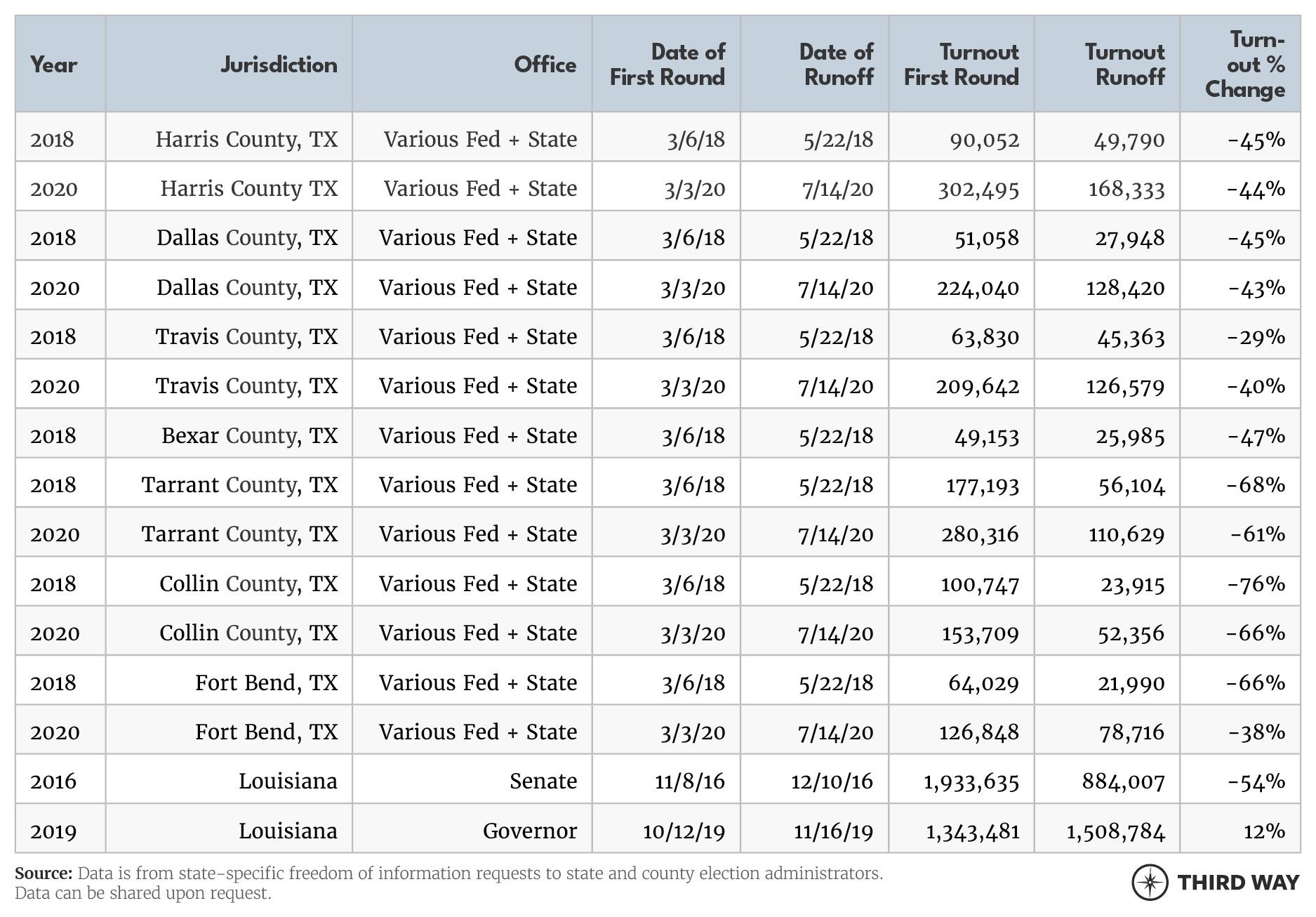 This table quantifies the strong disincentive for voters to return to the polls and vote again for the same office. In most cases, barely more than half of first-round voters participated in the runoff election.

The Louisiana 2019 Gubernatorial runoff is a notable outlier as the only election in which the runoff turnout increased. In that case, the runoff election was held in November, a time when voters may be more likely to expect an election. Additionally, that election featured four serious candidates, including one Democrat and three Republicans, and everyone was expecting a runoff featuring one candidate from both major parties, so quite a few voters may have sat out the first round waiting to see what their options would be in November.

In every election in this study, the November election had higher turnout than the “off-cycle” election. Based on this evidence, states and counties should aim to hold the decisive election in  November, when turnout is highest.

There is a solution that would enshrine majority rule, which is arguably the sole positive attribute of runoff elections, while reducing costs, improving voter experience, and improving representation for women and people of color.

A ranked choice voting election would eliminate the need for primary runoffs. Voters could simply rank their choices during the first round, which would eliminate the hassle of returning for a second round of voting. However, election administrators could continue counting ballots through multiple rounds until a candidate wins an absolute majority of support relative to their opponents.

Ranked choice voting would also ensure that the majority winners win a majority of a higher pool of voters, as runoff elections tend to see turnout decrease precipaticely. In the Texas primary examples above, turnout routinely fell 50% or more, and that was even true of the Louisiana Senate election in 2016.

While upgrading our election system to implement ranked choice voting elections comes with a small cost, it pales in comparison to the costs of a seperate runoff election. Likewise, the voters themselves have a reduced burden by only having to make one trip to their voting location or send one mail ballot instead of voting twice in a short time period.

Deb Otis is a senior research analyst at FairVote.