Fall 2021 Update: Mapping Jobs and the Transition to Electric Vehicle Assembly in the US

Since we issued this report last May, we have seen a step up in announcements of more production of electric vehicles and batteries in the US. In fact, for an industry that plans new products over a 5-10 year time span, EV-related announcements have come with lightning speed this year.

What’s speeding up the pace of EV plans? Perhaps industry has had time to build confidence in their strategies to shift toward electric models. They might also be paying attention to the tens of billions of dollars that Congress is likely to invest in EV consumer subsidies, charging infrastructure, and supply chains that will make the choice a no-brainer: get ahead on EVs or get left behind.

Bottom line: change is happening, but much more needs to take place to fully transition to clean vehicles, and do it fast enough to keep the nation’s manufacturers ahead of the curve and our auto workforce as strong as it is today.  As we’ve noted in previous memos, other nations are making investments to help their domestic auto industries compete in an EV future.  America has a chance to do the same, by passing an infrastructure bill and reconciliation package, which combine to provide robust support for charging stations, batteries, EV purchase incentives, and manufacturing retooling. Jobs, competitiveness, and reducing climate risks are all on the line.

What the Latest Maps Show (and don’t)

As before, we’ve got one set of three maps that show all light vehicle assembly and parts plants owned by auto companies. The large map includes all of these plant locations – assembly and parts. The two smaller maps in this trio simply separate assembly and components plants, again all owned by auto companies. The dot colors provide a quick way to tell whether the plant produces EVs, or no EVs, or both.1 Many of these automakers own dozens of factories that produce their components like engines and transmissions. You’ll be able to view those facilities here too. In addition to location, these maps show what kinds of products each facility makes and how many workers they employ in assembly plants.

What you’ll see:  The updated maps have added five EV startups: Arrival, Canoo, Electric Last Mile Solutions (ELMS), Fisker/Karma, and Zoox. Most of these smaller EV startups have one plant and are preparing to launch EV production in the next 24 months. Rivian’s Normal, Illinois plant is just launching production of its electric pick-up truck but we did include this on our initial map.

And then there are the large domestic auto companies who have been around for a century. These “traditional” automakers – Ford, GM, and Stellantis – pump out over one-half of all production. They have committed over $70 billion of new investments in EVs and battery cells, most of it announced since May. Ford just announced a $11.4 billion investment in an all-new EV plant in Tennessee, along with two battery plants located in Kentucky and a third one in Tennessee. All told, these facilities are going to employ 11,000 workers.

What you won’t: There is much effort behind the scenes that suggest further EV plant expansion in the months and years ahead. For example, Rivian has confirmed it is working on an investment of $5 billion to construct a second EV plant. It also is getting close to becoming a public company through an initial public offering (IPO), sometime around mid- to late-November 2021. 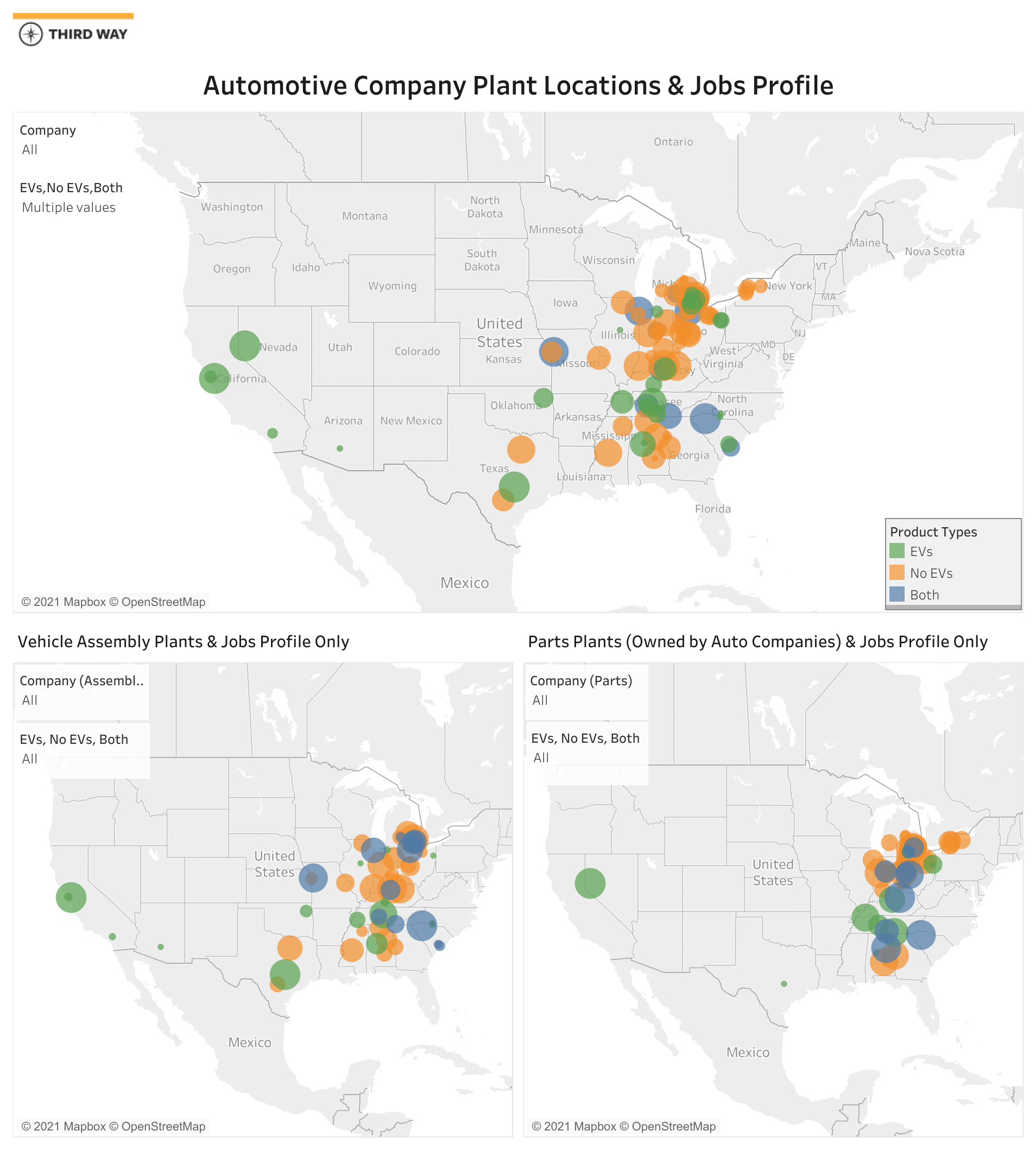 We have one more map displaying the location of independent suppliers that sell internal combustion engines and transmissions to automakers. It also shows all of the nation’s EV suppliers, noted by green dots.

What you’ll see: Though suppliers for traditional vehicles still dominate, it’s clear that the EV supply base has started to take hold across the country. There are 21 additional EV suppliers on the map now. You will also see that the vast network of traditional gasoline engine and transmission suppliers is ever present. Given that the US is estimated to produce 8.6 million gasoline-powered vehicles this year, this will come as no surprise. It does indicate how daunting the prospects are for the transition to EVs and why it is important that this transition start now, with not a minute to lose.

What you won’t: Unfortunately, the products that these EV suppliers are making is detail that is not available in the map. Additional research conducted reveals a competitive gap between the US and China. For example, China has 389 lithium-ion battery companies, Japan has 23, Europe has 34, and the US, 29. This is also true for battery parts, such as cathodes, anodes, separators, and electrolyte. China has 64 cathode producers, while the US has 10. 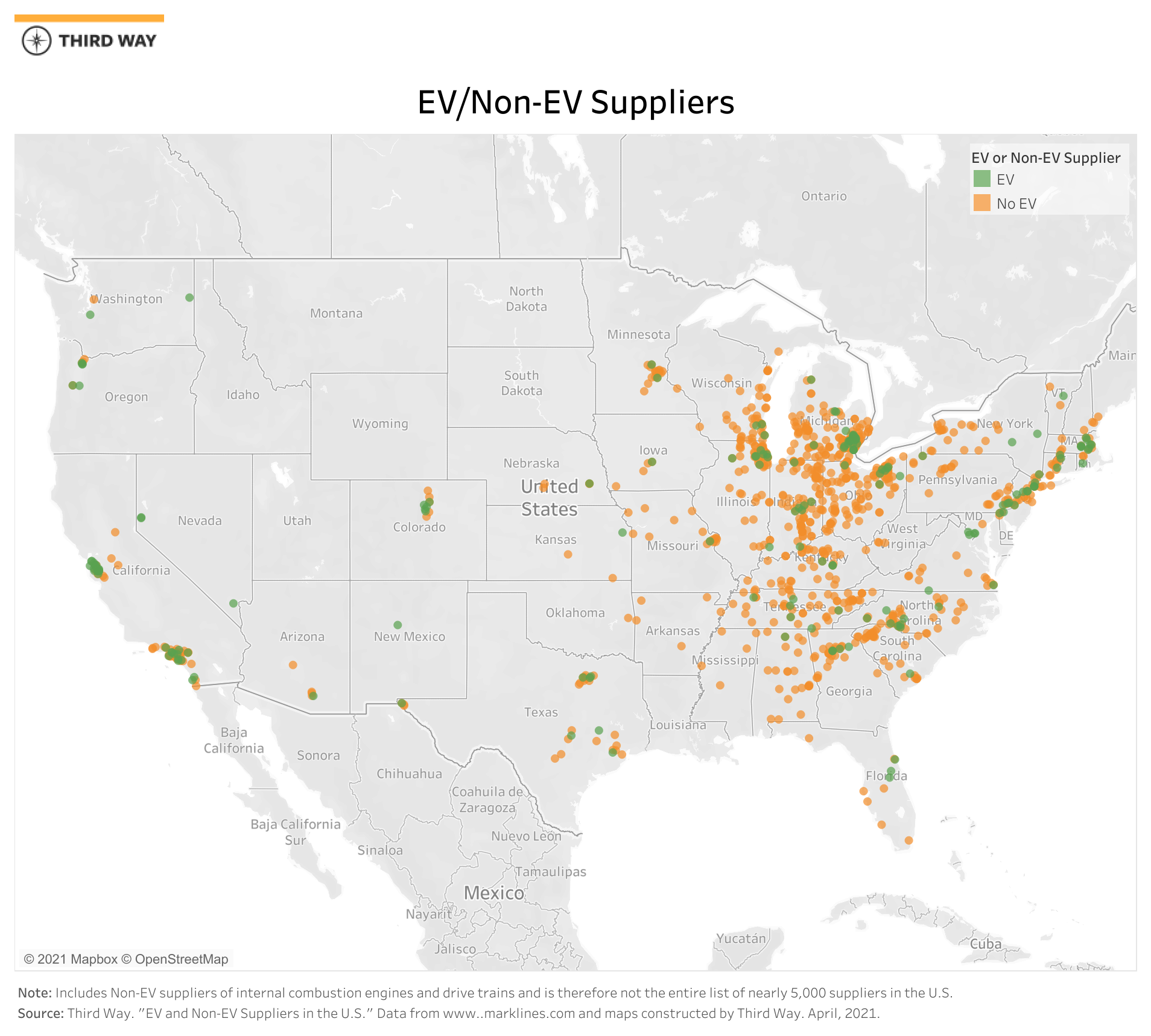