The automotive sector is one of the largest industries in the US as measured by employment. Over 4 million jobs are tied to assembly, the supply chain, wholesalers, retailers, and repair services. But given the global and highly competitive nature of auto manufacturing, America cannot afford to take these benefits for granted. If the domestic auto industry doesn’t keep up with where the market is heading, our companies will lose business and a lot of our workforce will lose their jobs.

Intense competition means that companies must constantly stay ahead of technology trends and focus on outdoing their rivals in a global marketplace. Domestic automotive industry leaders have done just that by being forward-looking and innovative for the past several decades—but with a few noteworthy errors. There was a period in the 1970s, for instance, when domestic companies were pumping out large cars and trucks and saw no need to diversify their offerings with smaller models. Demand for small cars surged after the global spike in oil prices, but by then it was too late. Domestic auto companies were locked-into their large vehicle product lines for years, and lost significant market share to Japanese manufacturers, and never regained it. 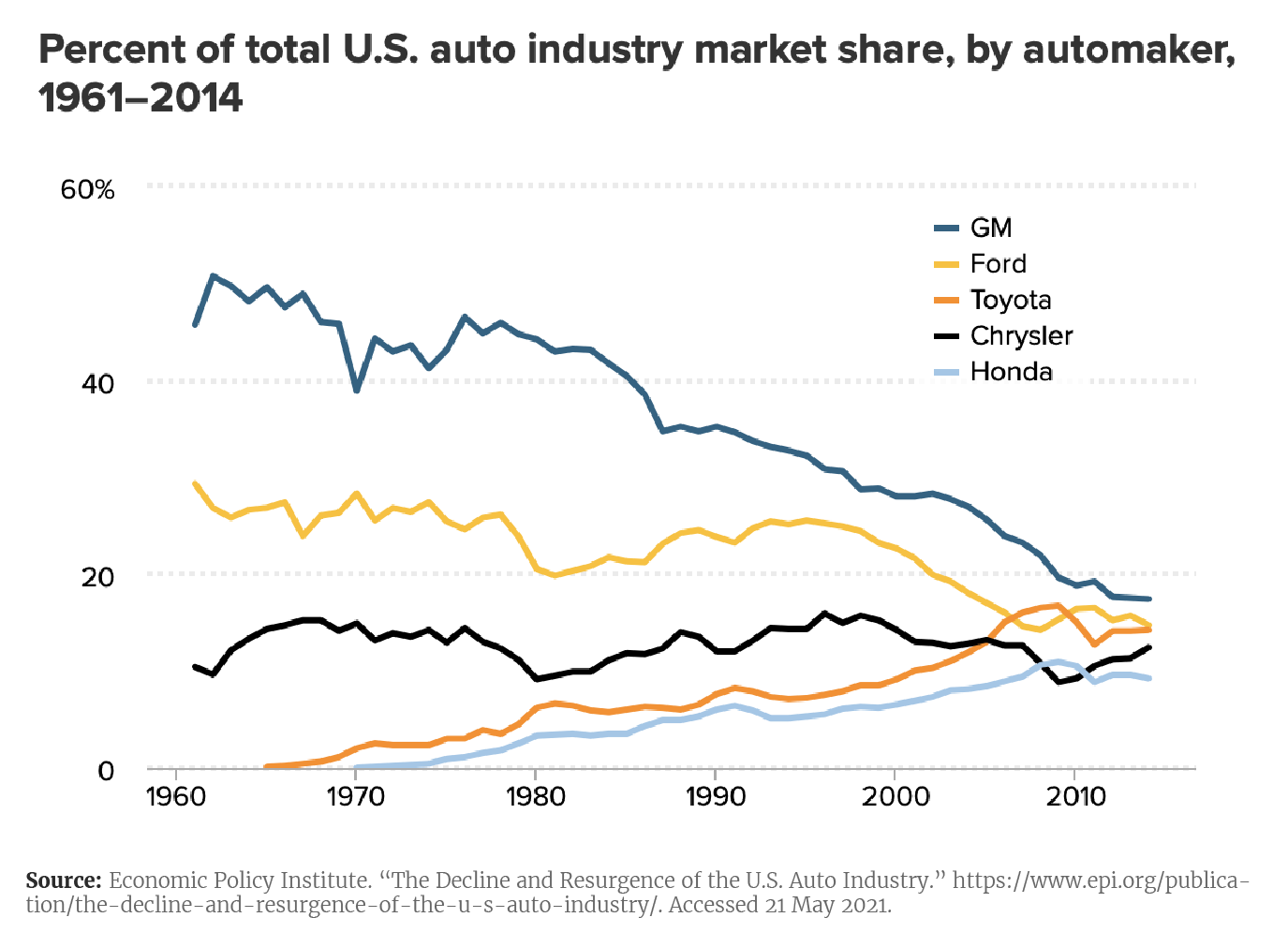 Fast forward to now: The emerging trend of electric vehicles is clear and compelling. Who needs a crystal ball when you can see EVs are already cheaper than gas-powered vehicles on a lifetime basis, and battery costs keep plunging year after year? EV development and sales are surging in Europe and China, where governments are helping their domestic automakers accelerate the transition and stay ahead of demand. This shift to electric is also beginning here in the US, but not nearly as fast. If the federal government fails to provide the policy tools to help US automakers keep up, the result will be disastrous. As our new industry maps show, disruption in the auto sector would threaten jobs in the supply chain that reaches across the entire country, and would devastate regional economies that rely on vehicle assembly.

Disco was great and all. But when it comes to keeping our auto industry prepared and competitive, the last thing we want is a repeat of the 1970s.

EVs are fast becoming the dominant technology and a significant opportunity for US automotive companies to sustain their competitiveness.

Third Way has created two sets of interactive maps to help visualize the factory footprint of automakers in the US, the number of jobs they sustain, and the sprawling supply chain that supports them.

The first set of maps focuses on facilities owned by automakers.1 This includes vehicle assembly plants, as well as factories making components like engines and transmissions, which many automakers have opted to produce themselves. In addition to location, these maps show what kinds of products each facility makes, whether they contribute to EV production, and how many workers they employ.

The second mapping project is a single map displaying the location of independent suppliers that sell internal combustion engines and transmissions to automakers. This map also includes EV suppliers. While jobs numbers for these facilities are not available, this map does indicate whether the parts manufactured in a plant are used in EVs or in internal combustion vehicles. Though suppliers for traditional vehicles still dominate, it’s clear that the EV supply base has started to take hold across the country.

Connecting the dots: Key takeaways from the maps

1. The US auto industry is expansive

The maps highlight how vast the industry is – they identify over 80 communities, some cities as well as towns with populations under 50,000, that have one of these plants. The plant workers are part of the communities and the company can become a pillar of growth and economic development, including growing real estate, schools, churches, and downtown retail businesses.

Experts find that more non-auto jobs and GDP are added in the communities where auto plants operate due to increased economic activity. These “induced” jobs can be multiples of the number of workers in the plant itself. IMPLAN economic analysis for 2018 estimated that each auto manufacturing job creates 11 additional positions in industries across the economy.2

The maps show clearly two major regional hubs for motor vehicle assembly and parts manufacturing. The Midwest region is the “original” hub, built on a foundation of technology innovation and growth from the early 1900s. This hub is home to GM, Ford, and Stellantis. It also now includes Rivian and Lordstown Motors, two EV startups.

The second hub is centered in several Southern states, particularly, Kentucky, Tennessee, Alabama, and South Carolina. The companies who located here are so-called “transplants.” These are foreign-owned companies who have now expanded in the Southern region over the last three decades.

A recent example of how these good paying plant jobs affect the community is the EV startup Rivian. It bought an old Mitsubishi plant in Normal, Illinois. Even before production starts later this year, the plant activity has revived the community. A recent article stated, “Some real estate agents are asking potential home buyers to submit their offers just hours after open houses end, a practice local real estate agent Greg Zavitz said he hadn't previously seen in 35 years of business in the area. Hotels are filling with Rivian employees.”

3. The transition to EVs is already under way…but still a long way to go

The transition to EVs has already begun in the US as you can see from the green dots on the maps. By our count, there are 24 assembly plants out of a total of 50 plants that currently produce or will produce an EV between now and 2025.

As you will see in the callout boxes for each plant, many of these EV facilities will also continue to produce gasoline-powered vehicles for a while. As a result, the level of US EV production volumes remains low today, but is set to grow at a double-digit pace in the years ahead. As battery costs continue to decline, there will be far fewer incentives for companies to do R&D and ongoing production of both types of vehicles. This dual track approach is costly and inefficient. The faster these companies can complete the shift over to new, electric vehicle models, the more they can reap the gains higher production volumes. Global scale will matter for their success – having to spend time and money on two engine platforms – gasoline and electric – will become less viable with each passing year.

4. Traditional auto strongholds are not leading the way…

Tesla is the leading EV player as you can see on the maps. Of the 50 vehicle assembly plants, 25 are owned by GM, Ford, and Stellantis (newly merged Fiat Chrysler and PSA). However, these companies have thus far designated less than one-half of those plants for EVs. Other foreign automakers like VW, BMW, and Volvo have moved ahead with EV plans for their plants in southern states.

Unfortunately, while many plants are currently producing or are on track to produce EVs, the volume of EVs in the product plans out to 2025 remains low. Yes, it is climbing, but high EV volume is coming mainly due to Tesla’s expansion. There is a long way to go and expensive retooling which needs to take place to see a successful industry transition.

5. …But these hubs make good long-term business sense for the transition to EVs

Plant facilities and the jobs in these communities represent valuable infrastructure and worker talent that can readily transition to EVs. Tesla, Lordstown Motors, and Rivian all purchased existing auto assembly plants as they began their advance production work prior to starting up their assembly lines. Retooling these factories on the ground is not only a viable option, but it could also be the best and most efficient business decision.

Businesses in the traditional hub have established networks and partnerships with local schools and community colleges. They understand the value of local workforce training. Companies have the potential to pivot to new technologies and production in a way that allows these communities to prosper.

6. Who’s producing EVs and where?

Three major categories of auto companies are producing EVs: the longstanding manufacturers who started the industry during the early 1900s, foreign-owned “transplant” companies, and the EV startups. The list below indicates how many plants operated by the manufacturers in each of these categories are currently producing an EV, or will produce an EV by 2025.

GM has 4: GM’s first EV plant in Orion, MI produces the Chevy Bolt and will soon produce the Chevy Bolt Crossover SUV. Recently, GM designated an additional 4 assembly plants as “Factory Zero-One” through “Factory Zero-Four,” which will be dedicated EV assembly facilities now or by 2025. Three of these “Factory Zero” plants are based in the United States—in Detroit-Hamtramck, MI; Lansing, MI; and Spring Hill, TN.

Ford has 5: Ford is building an electric pickup truck facility at their iconic Rouge plant location in Dearborn, MI, along with 4 other plants that are slated to include production of EV products by 2025. It appears that Ford has made significant progress, however, most of this production plan is small and incremental to the larger production schedules of gasoline-powered vehicles at these plants. To date, Ford is producing the Mach-E in Mexico, the only full battery electric vehicle offering by the company. Production of a plug-in Ford Escape has been delayed until later this year.

Stellantis has 2: It has 2 plants that are lined up for EV products (plug-ins) and have made announcements regarding a big push toward EVs by 2025.

Tesla has 2: They now has two locations where they produce EVs.

Other Startups have 3: Lordstown Motors, Rivian, and Lucid are BEV assembly that are likely to launch EVs in the next year. Fisker is a US electric vehicle company, however their “Ocean” EV will be produced in Austria and not counted in this data base. There are also some niche players not yet included, like Arrival, Canoo, and Zoox.

Preparing for the US transition to EV production and jobs

A generational job transition to EV production would not only protect existing jobs, but also lead to job gains as suppliers set up battery cell plants and other EV component manufacturing. By accelerating the shift away from gasoline-powered vehicles and toward electric vehicles, it will save good paying jobs that would otherwise be lost to the tough competitors in Europe and China, which are moving fast to EVs.3 Making an intentional commitment to communities and workers as they make the transition is equally important. But all of this will require robust, holistic, and thoughtful policy at the federal level. Every moment of hesitation puts at risk thousands of jobs in communities across the Midwest region and in Southern states, and the long-term competitiveness of one of America’s most important industries.