Economic Opportunity in the Blue Wall: What’s Working & What More Can Be Done

In 2008, Michigan, Wisconsin, and Pennsylvania voted for President Barack Obama by a margin of 1.8 million votes. But only eight years later, President Donald Trump won in those states by a slim margin of 80,000 votes. What happened?

Sadly, as the high-flying coastal economies of California, Massachusetts, and New York went into hyperdrive after the Great Recession, the economies of the Blue Wall stalled. Michigan, Wisconsin, and Pennsylvania have lower real wage growth, lower private sector growth, and lower net business growth. Yet, amid this economic malaise, there are green shoots of progress. Michigan, Wisconsin, and Pennsylvania have implemented economic programs designed to improve investment capital, workforce development, and infrastructure. These policies are a good start to bring greater opportunity into the Blue Wall economies. Still, there’s more work to be done.

In this paper, we look at three key economic indicators affecting the three Blue Wall states, provide examples of on-the-ground efforts showing progress, and then propose the following three federal policies: a federal Opportunity Fund, Broadband for All, and the Apprenticeship America program. These three policies will increase economic opportunity in Michigan, Wisconsin, Pennsylvania, and the country at large.

Henry Ford and the assembly line were a great spark to propelling Michigan’s industry, but the industrial prowess of Michigan has been shaken over the last few decades. Currently, Michigan is punching below its weight in growing new businesses. According to 2016 US Census data, Michigan ranked 35th for new firm startup rates. Michigan’s startup rate is 9%, 1.3 percentage points lower than the national average.1 To become a national leader in emerging markets, Michigan must do better in supporting and promoting entrepreneurship. 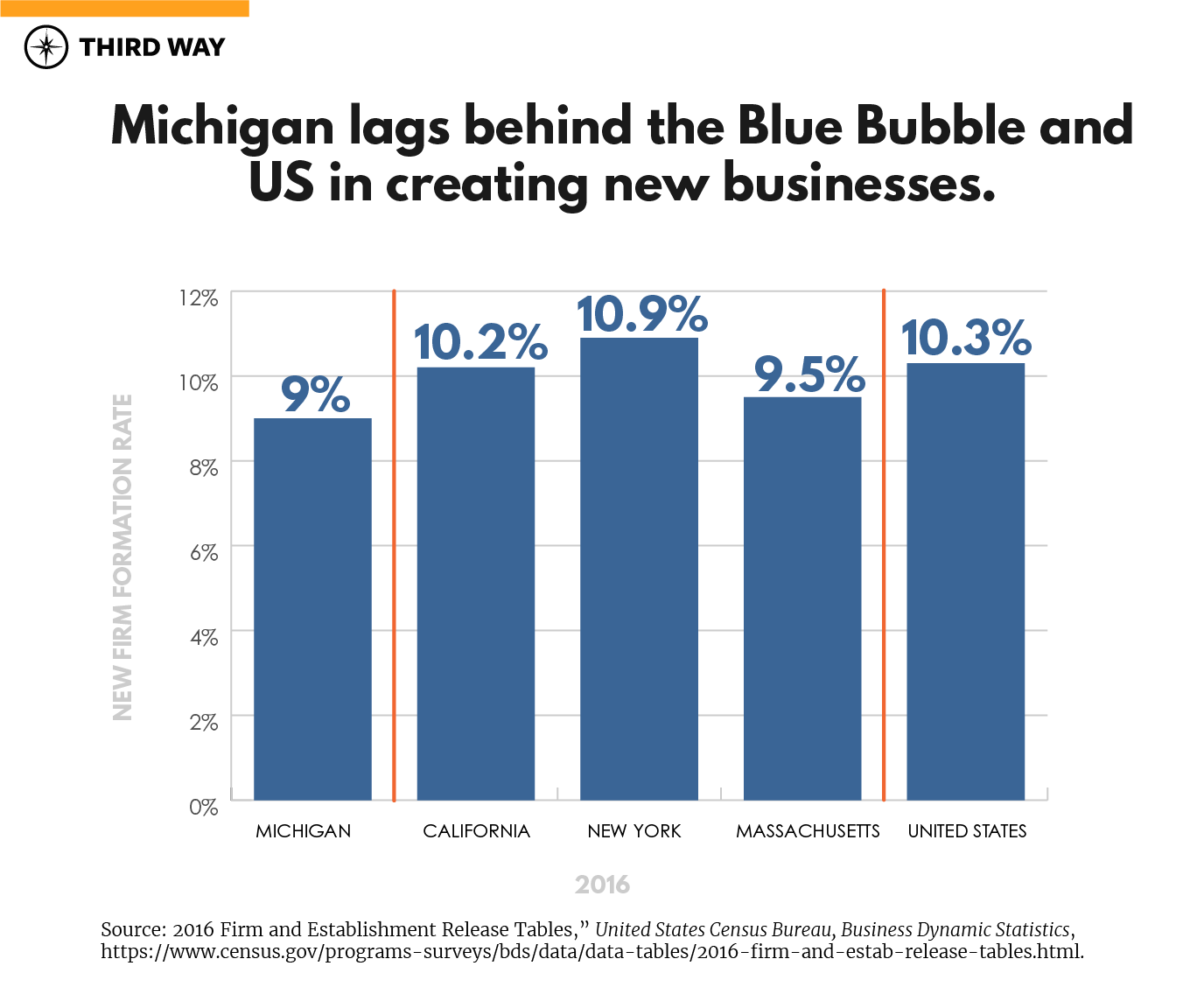 The lower startup rate not only disadvantages Michigan’s economy but also its workers. Small businesses are the real job creators in the US. Nearly half of Americans work for firms with fewer than 500 workers.2 Although Michigan has taken great strides to improve private-sector job growth, Michigan’s unemployment rate as of September 2019, is 4.2 % and Detroit’s is 4.9% compared to a national rate of 3.5%. Additionally, in the past 12 months, Michigan’s manufacturing industry has lost 6,600 jobs.3

What Michigan Gets Right

To create greater opportunity in Michigan policymakers must implement policies that uplift entrepreneurs, grow emerging industries, and increase the number of new businesses statewide. To that end, the state has started a number of interesting initiatives.

Since its development, the 21CJF has improved Michigan’s economy by generating $5.5 billion in economic output, creating over 26,000 new jobs, and increasing state and local tax revenue by over $165 million. A 2016 study found that for every dollar spent by the 21CJF, state economic output was increased by $21.4

The World Economic Forum estimates that investments in emerging technologies can increase Michigan’s manufacturing sector output by $7 billion in annual value by 2022.5 To help increase innovation, Michigan lawmakers tapped into the state’s vast and impressive public university system to create MTRAC, a grant under the Michigan Strategic Fund, which provides funding to five Innovation Hubs located at universities across the state.

All projects are reviewed by an oversight committee, comprised of investors, industry leaders, and university officials. They select projects with the highest commercial potential. Not only do grant recipients receive funding to further their research, they also receive guidance from members of the Michigan business community. By creating communication channels between academics and the private sector, R&D investment is more likely to translate innovation into industrialization.

Michigan is not alone in its struggle for capital investment. In 2015, four metropolitan areas received 80% of venture capital dollars invested across America.8  Outside these major metro areas, too many Americans lack the resources necessary to create the next booming business.

To address this opportunity crisis and bring more venture investment to areas outside Silicon Valley, Third Way has proposed the creation of an Opportunity Fund. Under this proposal, the federal government would provide $60 billion in equity capital funding to entrepreneurs, startups, and businesses in currently overlooked and underserved areas. The Opportunity Fund would enable states to establish their own venture funds or partner with local venture funds to provide seed capital to businesses that show promising results.

Currently, without a policy bringing sufficient equity capital to these places, entrepreneurs are incentivized to leave their communities to go to New York City, Boston, or Silicon Valley. When entrepreneurs choose to relocate, not only does their community fail to retain top talent, they also lose the potential jobs and opportunities that new businesses create. Creating a federal Opportunity Fund to supplement states’ ability to raise venture capital is crucial to creating more innovation, businesses, and good-paying jobs across the country.

Fast and reliable internet is as important as electricity in the 21st century. Children go online to do their homework, entrepreneurs use e-commerce to grow their business, jobseekers fill out online job applications, and patients in rural communities videoconference with doctors hundreds of miles away to receive lifesaving consultation and care. Still, 43% of rural Wisconsinites do not have access to broadband and are perpetually at a disadvantage at home, at school, and in the workplace.9 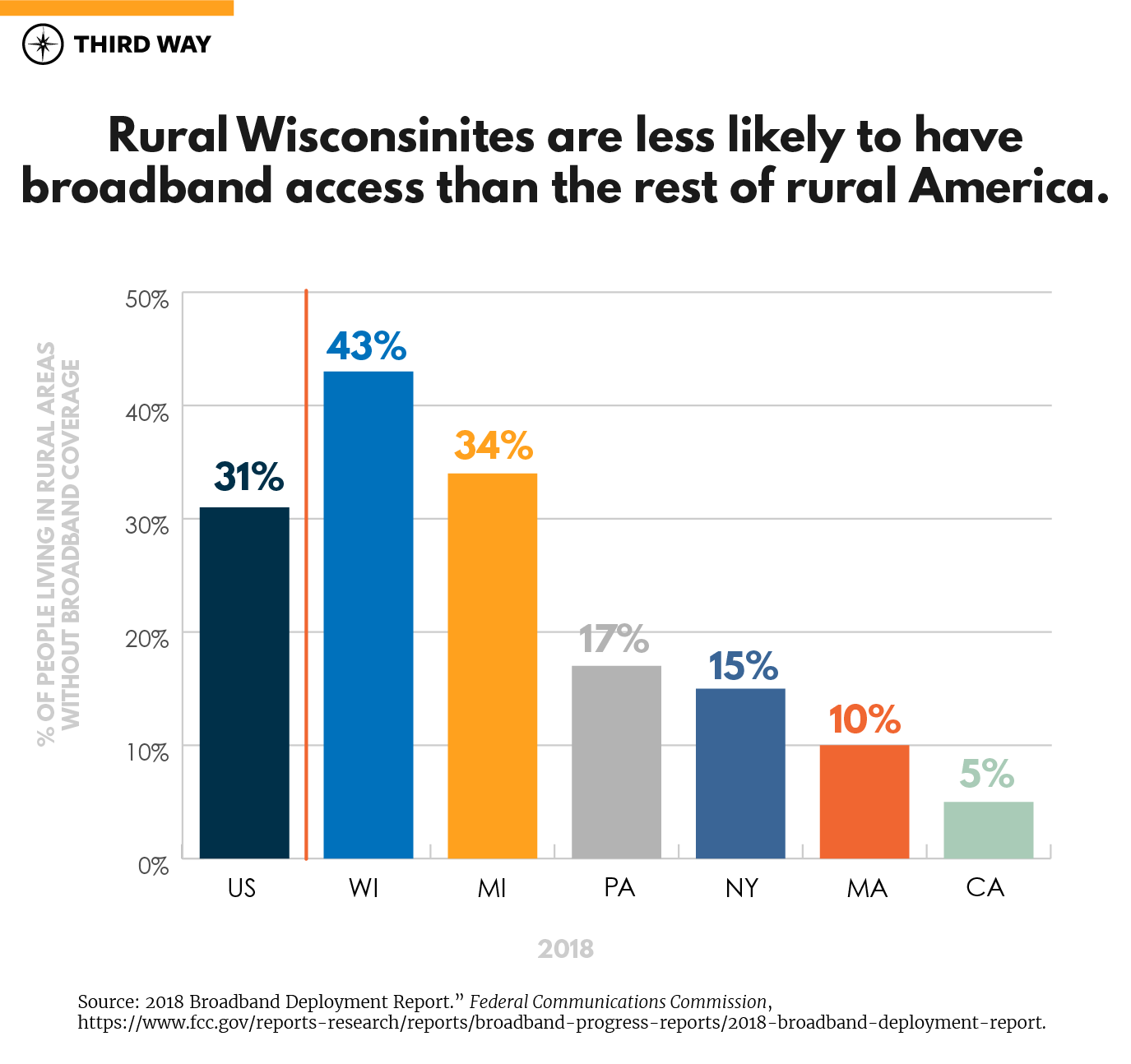 What Wisconsin Gets Right

To expand broadband connectivity, the state of Wisconsin is investing in making broadband service more accessible and affordable.

In July 2013, Wisconsin created the Broadband Expansion Grant to address the “last mile” problem of bringing broadband to rural communities. The grant provides matching funds to projects that will build up broadband infrastructure in rural areas. Broadband providers often do not set up shop in these communities because the marginal cost of providing broadband exceeds the marginal value. So far, this grant has funded 136 broadband projects, totaling $20.1 million.11

That said, the state of Wisconsin still ranks 36th in the country for broadband access. Knowing that the state can and should do more, Governor Tony Evers has signed a two-year budget nearly doubling investment in broadband, increasing funding to $78.6 million. The goal of this program “is for every Wisconsinite to have affordable access to broadband service, if they so choose by January 1, 2025.”12

This proposal would ensure that every household in America has access to high-speed broadband within two years. To accomplish this task, Third Way proposes expanding existing broadband infrastructure with a Broadband Construct Surge program and decreasing the cost of broadband with an Automatic Access program for low-income families.

The Broadband Construction Surge will ensure broadband availability through a national “Quick Build” promise to tear down barriers to construction, appropriating $45 billion in federal funding to subsidize the costs of technology-neutral broadband construction projects in hard-to-serve areas.16 By reducing the costs of construction, more telecom providers will be incentivized to install broadband cables and other technology in remote areas where subscription rates are low. Often, broadband providers cannot justify the cost of investing in new regions when there are limited customers in the region.

Many Pennsylvanians living outside major cities are starting to see the benefits of a tight labor market: housing growth, modest wage gains, and record low unemployment numbers.18 For example, counties in central Pennsylvania, like York and Dauphin, are reporting unemployment rates as low as 3.3%. 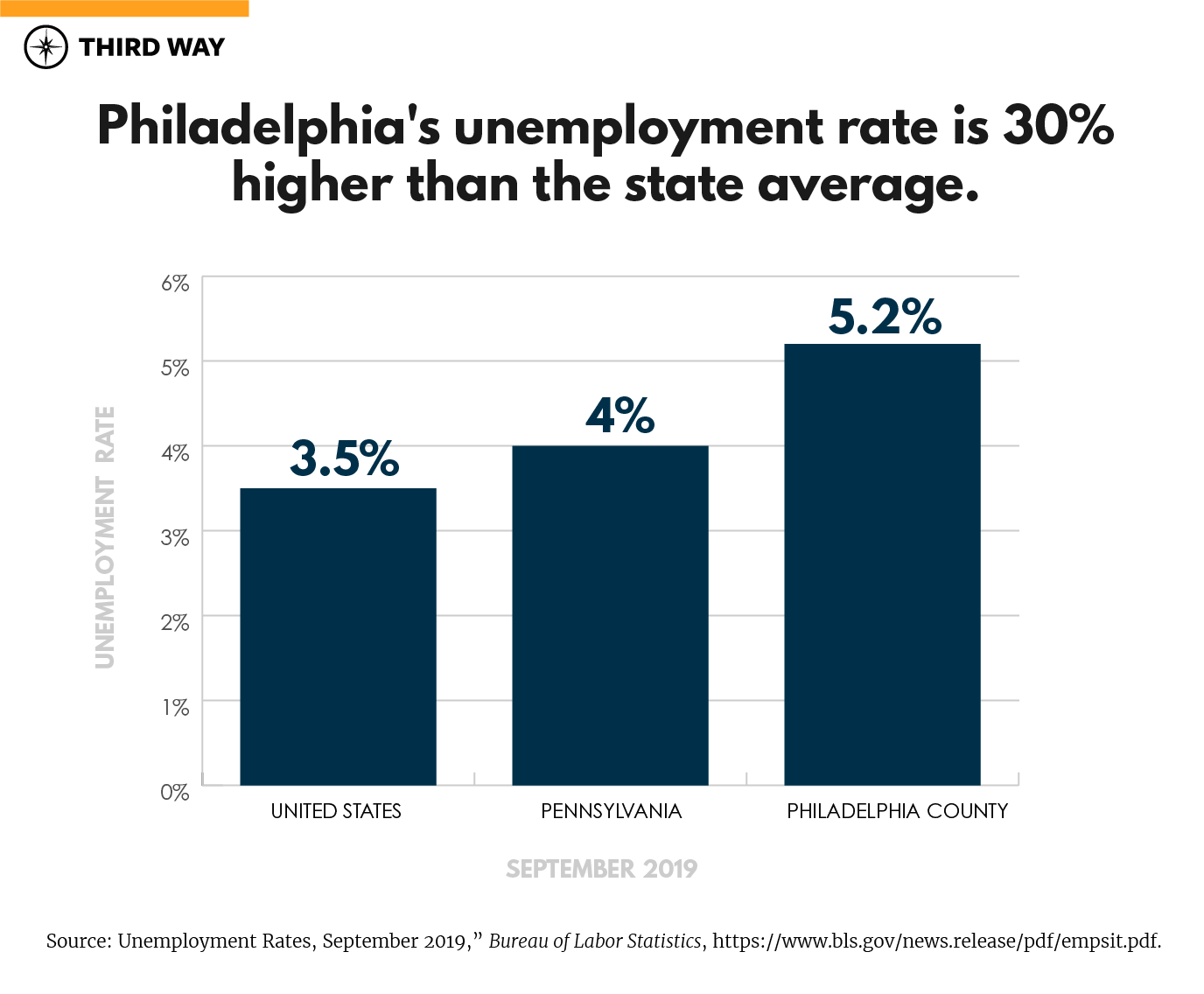 But Pennsylvania is struggling to fully employ its urban population. Philadelphia’s unemployment rate is at 5.2%, more than a third higher than the state average.19

And even among working Philadelphians, 53,000 people earn an income that falls below the federal poverty line.20 Often, in cities, there are ample opportunities for well-paying jobs, but only for individuals with the necessary skills to qualify for these jobs.

Without career-ready skills, Pennsylvanians will continue struggling to find work in growing industries that can provide a middle-class life.

What Pennsylvania Gets Right

Gov. Tom Wolf and Philadelphia Mayor, Jim Kenney have made workforce training a top priority in their administrations. The following policies illustrate how state and local governments are making workforce training and apprenticeship programs more readily available to jobseeking Pennsylvanians.

In addition to investing resources into job creation programs, Gov. Wolf has opened a new Apprentice and Training Office within the state’s Department of Labor to provide greater oversight and quality control. By creating a state-level agency, industry leaders, local community colleges and trade schools, and employers will be able to assess industrial needs across the state and allocate resources more efficiently to communities in need. So far, in 2019, the Apprentice and Training Office has  816 active programs, 4,556 new apprenticeships, and 18,184 active apprenticeships.22

“Fueling Philly’s Talent Engine” is a city-level workforce development program that partners with local employers to increase apprenticeships and job training programs in growth sectors of the local economy. Created by Mayor Jim Kenney in 2016, this program connects Philadelphia’s workforce development agency with local employers to develop apprenticeship and work training programs based on employer demand.

Since the program launched, it has provided 4,700 Philadelphians with job training and skills development, and “connected 176 Philadelphians to permanent jobs with partner employers.”25 Not only is Philadelphia’s program creating more jobs, they are also creating better jobs. Philadelphia is requiring employers who participate in their workforce programs to provide fair wages, health benefits, and credentials that employees can carry with them moving forward in their careers.

Moreover, in addition to providing job training, “Fueling Philly’s Talent Engine” is increasing the number of free universal pre-k slots available to individuals participating in a job training program. Many parents are forced to choose between staying home with their children and getting the skills they need to succeed in the changing workplace. Philadelphia is trying to reduce that burden for struggling families.

Many jobs left unfilled in this country do not require a four-year degree. In fact, 53% of US jobs are classified as middle-skill jobs, meaning that although they require some on-the-job or classroom training, they do not require a university degree. Yet, only 43% of the country’s workers are trained at the middle-skill level.26 To help Americans receive the training necessary to acquire middle-skilled, good-paying jobs, Third Way has proposed giving our nation’s apprenticeship infrastructure a massive overhaul through the Apprenticeship America program.

Despite the economic challenges they face, Michigan, Wisconsin, and Pennsylvania are crafting policy solutions to expand economic opportunity for their residents. In each state, government has partnered with the business community to increase opportunity. At the federal level, policymakers must take on the mantle of developing innovative programs to ensure that Americans have access to affordable broadband, comprehensive training and education, and the capital to build new businesses.