Third Way’s latest national survey with ALG Research finds that Democrats suffer from an economic trust gap that may impact the party at the ballot box if action is not taken ahead of the 2022 midterm election. This trust gap is the belief among voters that Republicans instead of Democrats are best able to manage the economy. But this survey also points to initial steps that Democrats can take to address the trust gap: Run as “Biden Democrats,” talk more about the economy, and talk about it in a way that centers on the majority of voters who identify as working and middle class. Here’s more of what we found:

Democrats have a wide economic trust gap, and this gap is imperiling the party’s electoral position. This survey builds on previous focus groups, but it is not conclusive on the sources or solutions to Democrats’ trust gap; our research into it is continuing. But Democrats can begin to address it by positioning themselves as “Biden Democrats,” talking more about the economy, and focusing policy content and messages on the supermajority of voters who identify as working and middle class. These actions won’t wholly bridge Democrats’ economic trust gap, but they are necessary steps forward.

Democrats risk falling into their economic trust gap in 2022.

Democrats are going into the 2022 midterm election facing a daunting economic trust gap, which is the margin by which voters trust Republicans over Democrats on managing the economy. Our June 2021 survey puts Democrats’ economic trust gap at 12 points. Democrats trail by 29 points with 2022 persuadable voters, they’re just tied among Latinos, and only 59% of Black voters side with the party on the economy. Democrats’ trust gap was a narrower seven points in a March 2021 ALG Research survey. As we emerge from the pandemic, the rising salience of the economy is compounding Democrats’ problem; a plurality now rate it as their top issue. 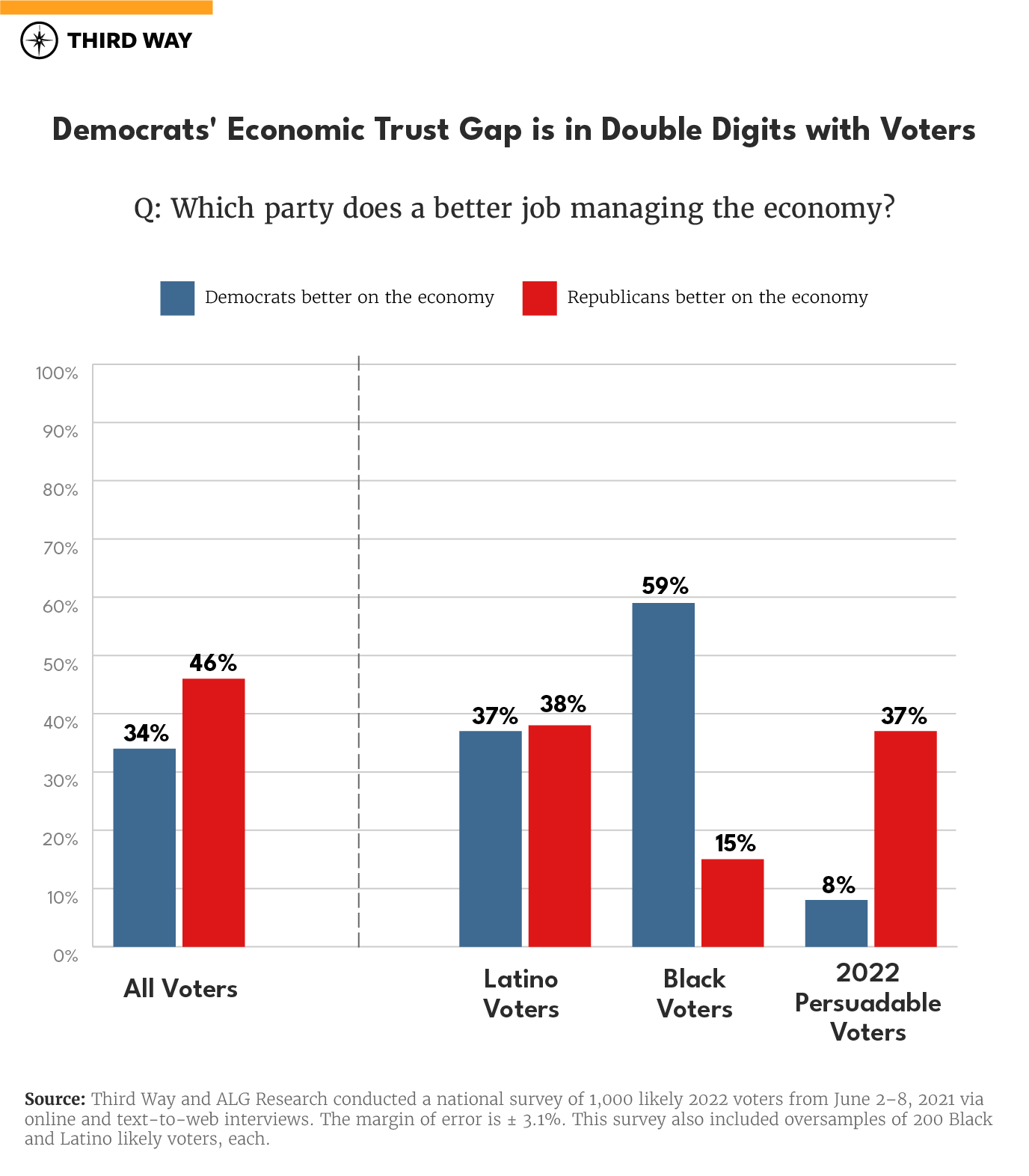 Democrats’ trust gap is not a new phenomenon, but there is increased urgency to address it ahead of the midterm election. Democrats are just tied with Republicans on the generic ballot, a result, if it holds up, which would unquestionably lead to Republican majorities after 2022. Democrats lead with Latinos by 15 points and Black voters by 68 points. But, according to data from Catalist, Democrats won these groups by 35 and 82 points in 2018 House races.

On the positive side, this survey did find that voters trust Democrats more on some kitchen-table issues like raising wages, supporting working parents, and making necessities like health care affordable. But it’s a different story on traditional economic issues, like managing the economy, creating jobs, and fighting outsourcing.

Democrats face a significant deficit to Republicans on voters’ top issue as we head toward the midterms. Unlike recent elections, Democrats do not have an advantage on the generic ballot to help mitigate their perceived weakness on the economy. Democrats’ economic trust gap is an urgent problem that requires attention right now.

Voters have more faith in President Biden than the Democratic Party on the economy.

On the economy, voters feel positive about President Biden and pessimistic about the Democratic Party. In response, Democrats running in 2022 can bolster their position on economic issues by aligning themselves with Biden’s mainstream platform. A slate of “Biden Democrats” can be part of the party’s path to retaining power in 2022.

Biden is in positive territory on the economy: 50% rate him positively and 48% negatively. Biden’s numbers grow among Latinos and Black voters, who give him margins of +15 and +72, respectively. He is moderately underwater with persuadable voters at 38–45%. But for Democrats in Congress, just 41% rate them positively on the economy to 55% negatively. Democrats’ deficit compared to Biden on the economy becomes even more consequential among key subgroups. Latinos give them a negative 44–50% rating, while Black voters are more favorable at 70–22%. By a 21–59% spread, persuadable voters rate Democrats negatively.

Being a Biden Democrat means supporting big, popular, and mainstream ideas. It’s about being for policies that make a difference for the country and peoples’ everyday lives. It’s championing achievements like the American Rescue Plan, fighting for proposals like the American Jobs Plan, and looking ahead to new ways to build back better. It’s not about diminishing this agenda or proclaiming it small ball. Democrats should run toward—not away from—Biden on the economy in 2022.

A key step toward closing the economic trust gap is for Democrats to simply talk more about the economy.

A part of Democrats’ answer to the economic trust gap should be to talk more about the economy. By emphasizing the economy, Democrats can better convey that they understand voters’ priorities.

Most voters identify as working or middle class and respond to policy messages centered on them and core economic values.

Eighty-four percent of voters in this survey identified themselves as part of the working or middle class. Most voters from households making under $40,000 a year identify as working or middle class, but this also holds for households making over $150,000. And so, it makes sense to explicitly call out working- and middle-class communities in Democratic policy messages. Elevating these voters does not mean marginalizing our most vulnerable communities, and Democrats should continue to fight for the poor and disadvantaged. It is about meeting voters where they are and how they identify themselves.

The survey evaluated this message framing approach by including a split-sample experiment where several Democratic policy proposals were presented in two ways. One split used middle- and working-class framing and elevated core economic values like hard work, creating opportunity, fairness, and entrepreneurialism. The other split used message framing that focused more on the most vulnerable communities. The metric we used to evaluate these messages was how well they communicated support for working- and middle-class communities (since this is how an overwhelming majority of voters identify themselves).

The results of this message testing were striking. Messages that referenced working- and middle-class communities and the highlighted economic values scored, on average, 14 points better than alternative messages on helping the working and middle class. Respondents were also questioned before and after the message testing on who benefits from Democrats’ overall policy agenda. Among the split that saw the middle- and working-class message framing, the share saying the working and middle class benefit most increased 10 points from 40% before the message testing to 50% afterward. 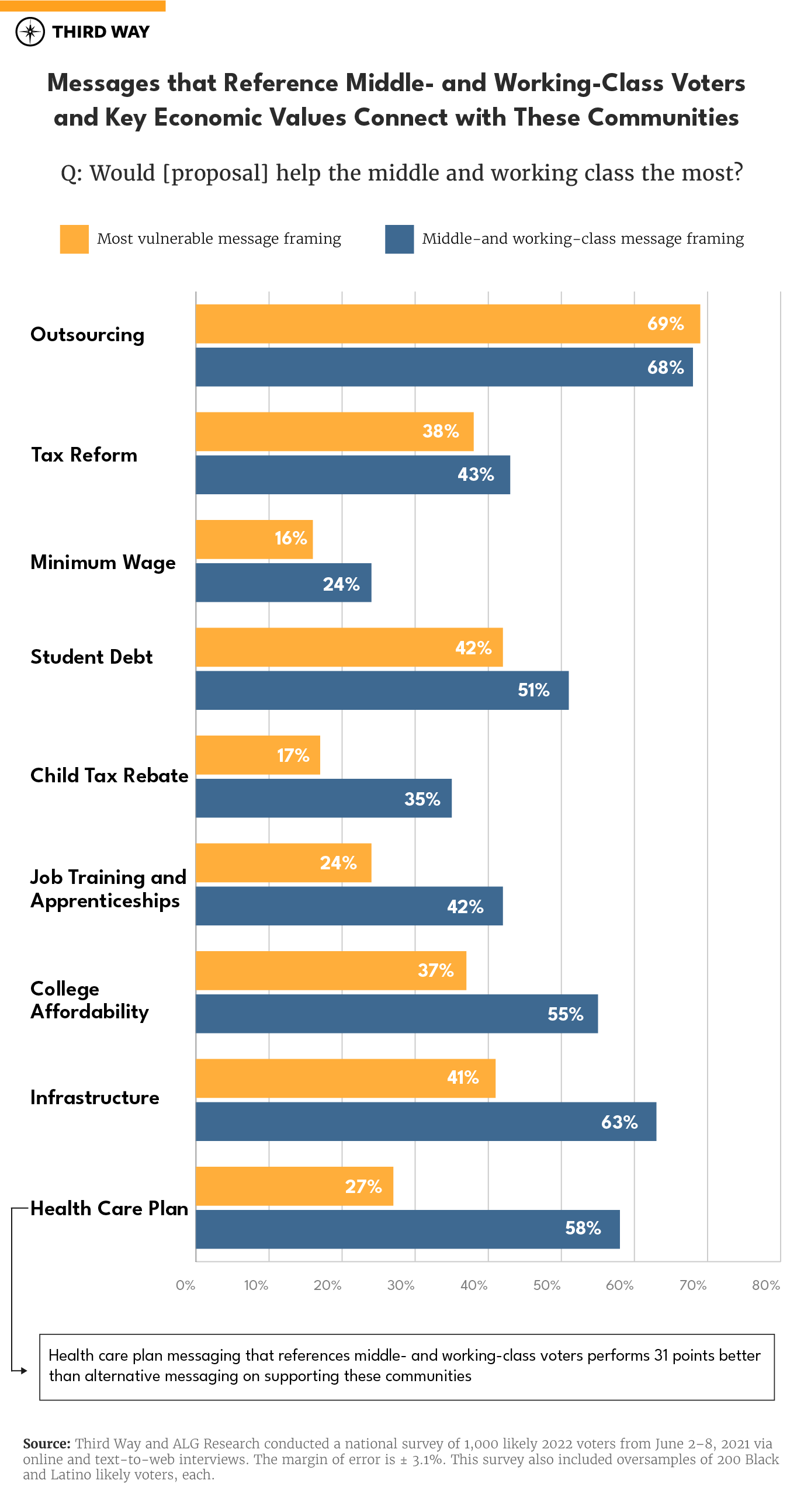 When a Democratic health care proposal is framed around helping “low-income families,” a plurality at 44% say that it most helps the poor to 27% who say it benefits the working and middle class. But sentiments shift when the framing is tweaked to reference “working families,” and 58% indicate that the working and middle class would benefit most. On Democratic priorities like infrastructure, framing a message around putting people to work and supporting businesses dramatically outperforms an alternative message framing. The critical distinction in this message testing experiment is not policy goals—since both splits describe the same policies—it is the communities and values centered in the messages.

Nearly the entire American electorate identifies as working or middle class, so it is crucial to frame Democratic policies around these communities. The message testing experiment in this survey found that messages that explicitly reference the working and middle class and core economic values best signal support for these communities.

Progress by Democrats on narrowing the economic trust gap now and through November 2022 could make the difference between sustained majorities or a Republican wave election. This survey found that initial steps that Democrats can take include running as “Biden Democrats,” talking more about the economy and talking about it in a way that centers working- and middle-class voters. There should be an urgency to direct these efforts toward Latino and persuadable voters, subgroups which are especially unsatisfied with Democrats on the economy. Black voters, while less negative, also rate the party lower on the economy than Democrats would hope. Democrats’ task for the next 16 months isn’t to overcome their economic trust gap; it’s simply to not plunge into it.

Third Way and ALG Research conducted a national survey of 1,000 likely 2022 voters from June 2–8, 2021, via online and text-to-web interviews. The margin of error is ±3.1%. This survey also included oversamples of 200 Black and Latino likely voters, each.