The bipartisan infrastructure deal (BIF) was a historic achievement that few thought possible. But since its passage in November, the law has done little to move voter opinion in Democrats’ favor.

To find out why and what to do, Third Way and Impact Research conducted a survey of 2000 likely 2022 voters to investigate voter opinion on the BIF and its messaging. The results point to one fixable imperative and several simple but important messaging tips for Democrats when it comes to talking about the law. This memo lays out ways to maximize the electoral impact of the BIF for members in swing districts, and for the Biden administration as it looks to trumpet its accomplishments in 2024.

The Fixable Imperative: Voters Have No Idea BIF Passed and is Law.

Quite simply, voters do not know the bill was passed. While voters express high levels of support for the deal once they hear about it, only 24% of voters think the bill is law. Meanwhile, a plurality (37%) says they “don’t know” the status of the bill, 30% say “it is still being worked on in Congress but isn’t law yet,” and 9% believe it is not being worked on in Congress and will not be passed.

Given that a large share believes the deal is still being worked on in Congress, it is clear that voters are confusing the BIF with BBB, which, of course, has not passed. In selling this legislation, the first order of business is to remind, inform, and convince voters that it is now law.

The Messaging Imperative – Voters Need to Know What They Get from the Deal.

When voters hear about the BIF’s basic provisions, they are overwhelmingly supportive. After hearing a description of the package, support for it reaches 80% with all voters and exceeds 70% across urban, suburban, smaller metros, and rural areas. 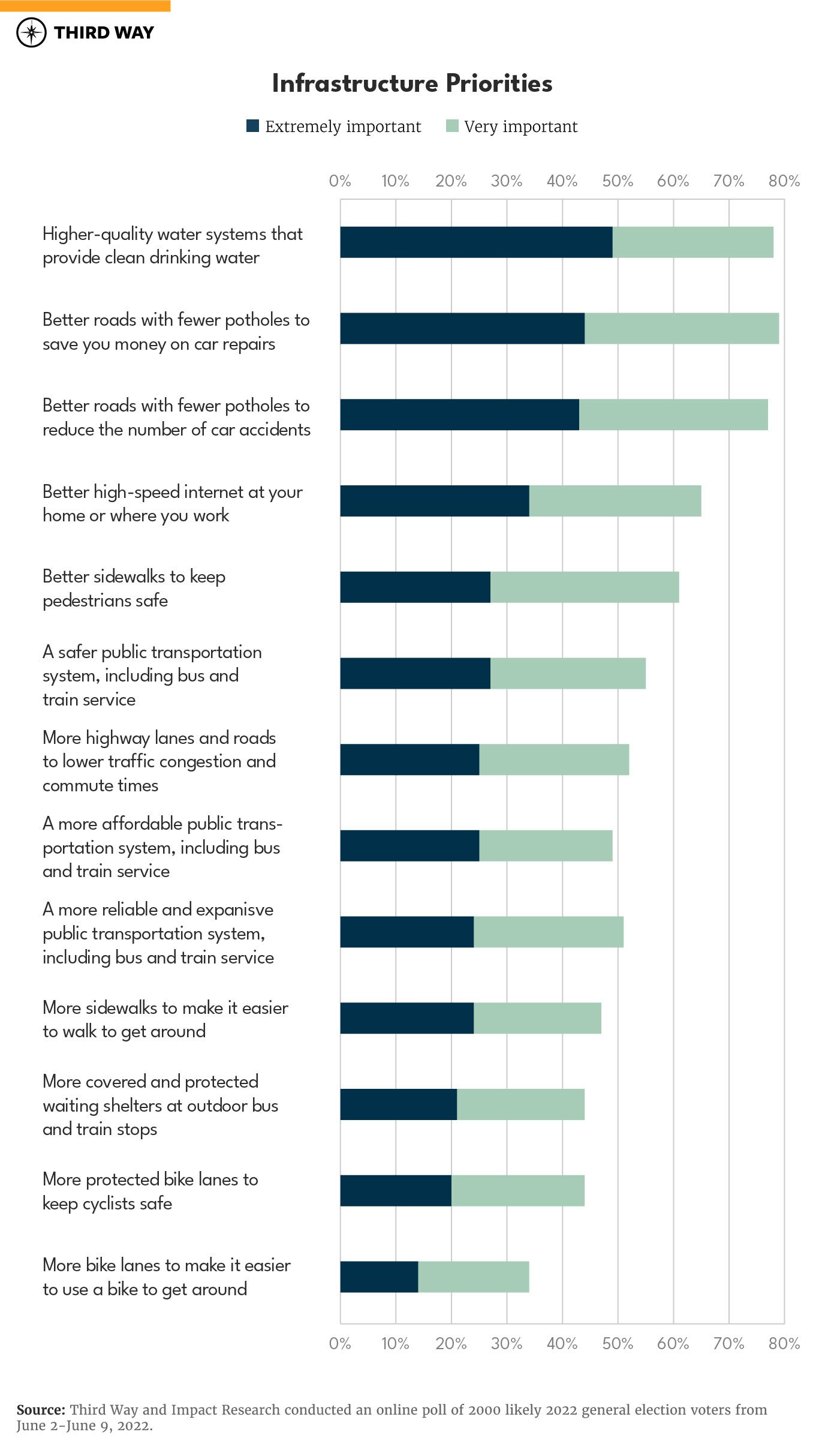 These everyday items are not only most popular with voters, they are also most believable. Once voters learn about the BIF, 74% think it will give them peace of mind that their water is safe to drink and 74% think it will improve the quality of roads in their area. Two-thirds think it will help their local environment, will be good for the economy in their area, and will create good-paying jobs in their community. Notably, far smaller shares believe it will help address climate change (49%) and lower inflation (38%). 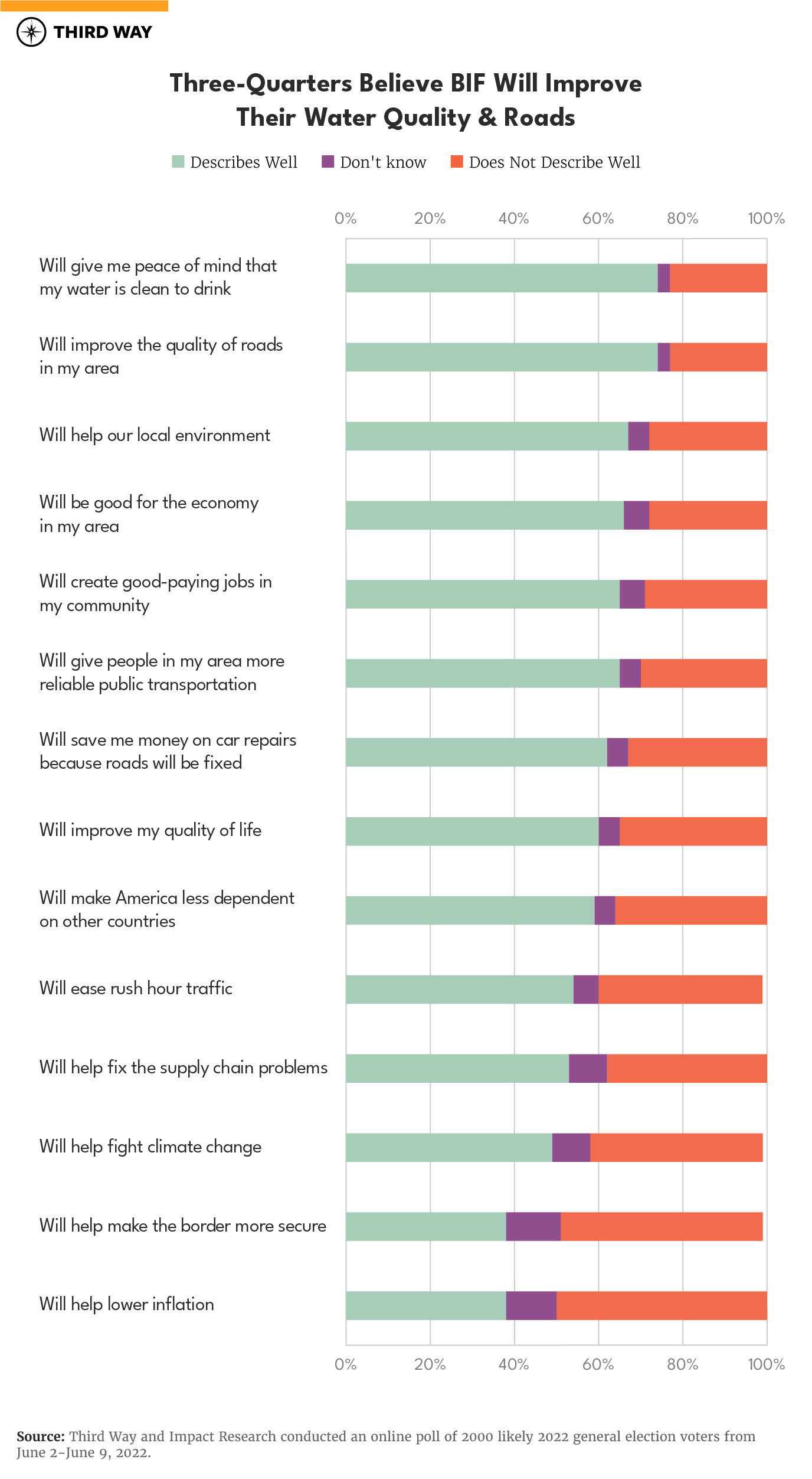 Finally, a message highlighting that the BIF will create jobs that don’t require a college degree stood out as the top message. And when reading a description of the law, voters highlighted “Buy American” as an important element. “Buy American” especially resonated in rural areas and smaller metros.

Better roads, cleaner water, and faster internet made with American products and built by American workers is what this deal is about and what sells.

The BIF deals with voters’ everyday concerns in straightforward, tangible ways. Messaging that highlights the basic facts of the deal drives home just what they stand to gain from it.

The Messaging Trap – Don’t Make this About Other People’s Problems.

The BIF represents a tremendous opportunity for Democrats to appeal to voters across groups and partisan divides, but its benefits must be presented as universal. Democrats should avoid falling into a messaging trap by remembering that most Americans have drivable roads, drinkable water, and working internet. They want them to be better, safer, or faster.

There is a key distinction between providing access to clean water and internet and providing improvements to existing services. Democrats tend to focus on providing access to basic services, and this law does great work in those areas. But just as most Americans had health insurance when we debated the ACA, most Americans have access to drinkable water and decent internet and perceive conversations about access to be directed to someone else. By talking about better quality water systems that will improve water safety, improvements to internet connectivity, and better and safer roads, we can show that this package is directed at a broad swath of people.

There Are Opportunities to Attack Republicans who Voted No.

Among persuadable voters, a message attacking Republicans for siding with Big Oil stood out, with 38% saying they were “much less likely” to support a Republican based on the message. Negative messaging calling out Republican hypocrisy for trying to claim credit for projects they voted against, and putting party politics ahead of what is good for the country, followed as the next-best negative messages. 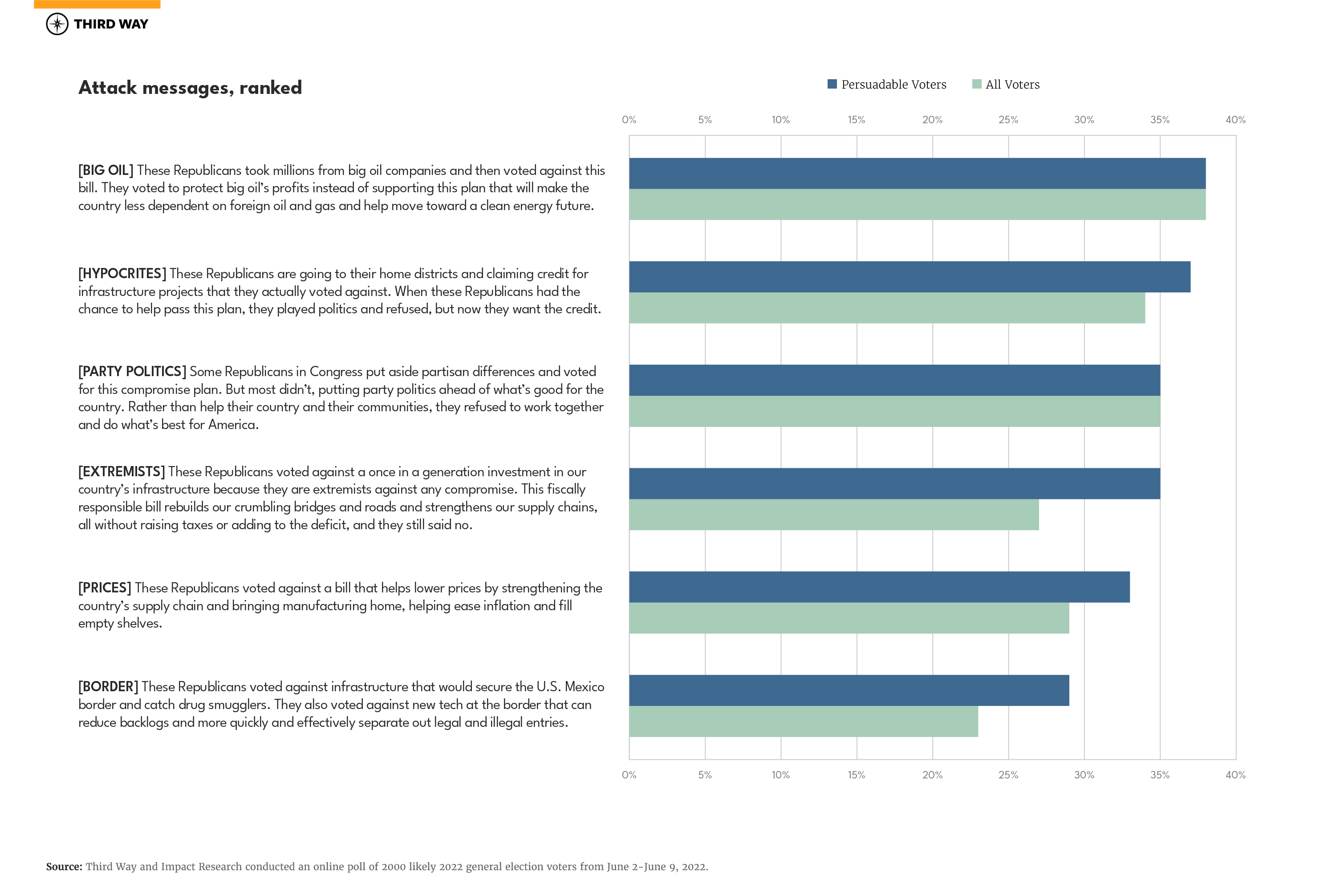 While many provisions stood out as highly persuasive to voters, a few common Democratic messaging tactics fell to the bottom as particularly unpersuasive.

Voters believe that the BIF would benefit their communities in specific and tangible ways, but do not believe claims that the deal would address every problem the country faces. Voters do not believe the deal will fight inflation, nor do a majority believe it will address climate change.

Voters also did not gravitate towards a message on how the package will improve racial equity. While the racial equality message performed better with Black and Latino voters compared to all voters and persuadable voters, it still fell far behind universal messages on jobs, clean water, and roads and bridges.

Democrats should remain focused on what the law is most specifically about and not pound square pegs into round holes.

Democrats have a long way to go in convincing voters of what they stand to gain from the bipartisan infrastructure deal. But the task is not overly complicated; the deal’s popular provisions speak for themselves. By making clear that this law has been passed, and communicating that the most popular components of the law are headed to their communities, Democrats can leverage their success passing the BIF into electoral gains.