The trifecta of the Inflation Reduction Act, CHIPS and Science Act, and Infrastructure Investment and Jobs Act sets America up to create at least half a million net jobs across the country by 2030. These three bills finance America’s future by investing $500 billion in American businesses and workers, positioning our country to lead in clean energy manufacturing and supply chains. This will unleash potentially well over one trillion dollars in private investment, providing American families with lower energy costs, health benefits, and jobs. Third Way’s analysis of how federal clean energy action will affect employment had three key findings that are important to communicate to Americans across the country:

1. Every single state will see net job growth in the clean energy economy.

As clean energy becomes the foundation of America's economy, many Americans are unsure what these changes will mean for their home state. Because the President and Congress’s investments are in every clean energy source and technology, Decarb America's modeling finds positive job growth in ALL 50 states —and the District of Columbia by 2030 and even greater job potential by 2050.1 Many of these jobs do not require a college education but instead offer people the opportunity to build on their skills while working in sectors like construction, manufacturing, and agriculture. And the jobs are not just limited to the energy sector. Secondary job benefits will help drive growth in areas like healthcare, education, childcare, and entertainment, adding around 2 million net jobs by 2050.

2. The Midwest is at the heart of the clean energy job expansion.

The Midwest will see immediate clean energy job benefits, with more than 146,000 net new jobs expected by 2030. These jobs touch on all clean energy sectors, like transmission lines, energy storage, and electric vehicles. As we move toward 2050, the Midwest consistently experiences one of the highest job rates per capita.2 With the advantage of this region's close ties to agriculture, the clean fuels sector alone is expected to bring in over 238,000 net new jobs by 2050—making it the largest job-creating sector in the Midwest that year.3

As early as 2023, the top 11 oil, natural gas, and coal-producing states will gain over 31,000 net jobs. That's because the energy veterans working in these states will see their opportunities diversify to include clean fuels, residential efficiency, solar, and more. In 2030 and 2035, these states will make up nearly a third of all clean energy jobs across the country. And in 2050, this total jumps to a whopping 578,000 net new jobs–that’s a quarter of all clean energy job growth dedicated to these top fossil states alone. Where states see a decline in fossil jobs, we found a big increase in parallel industries that give fossil workers the opportunity to apply their technical skills to new and secure clean energy jobs.

The legislation Democrats in Congress passed this summer, and President Biden signed into law is kickstarting a jobs boom. The three bills were authored by or led by Democrats, with the passage of the most significant climate legislation (Inflation Reduction Act of 2022) driven by Democratic votes alone. With the industrial-focused approach put forth by these three bills, the underlying message is clear: Democratic-led clean energy investments create hundreds of thousands of jobs for Americans across the country. 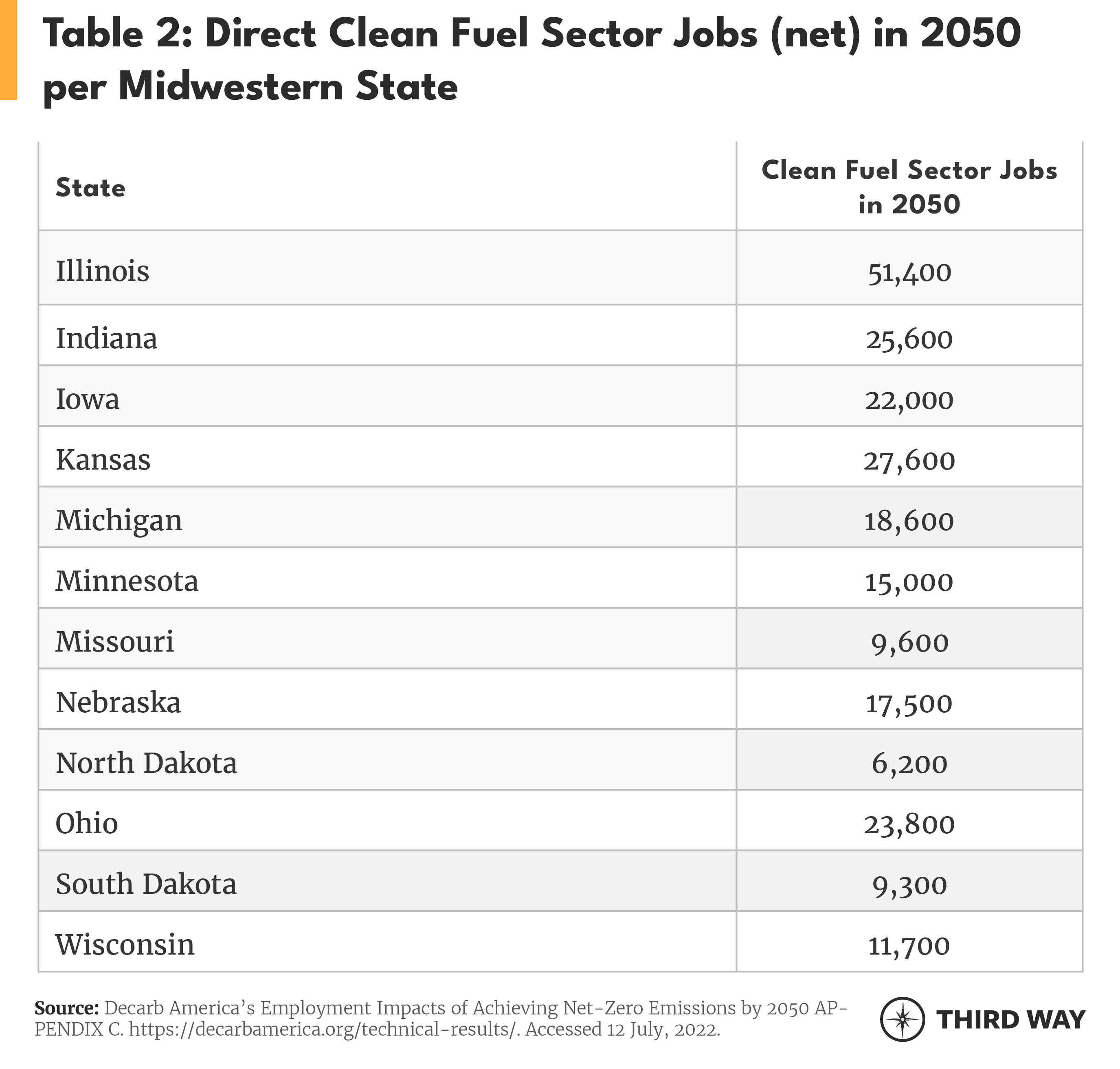 Sectoral Distribution of Jobs Per State in 2050

Fifty-one pie charts can be overwhelming, so we divided them into six geographic zones (Pacific, Rocky Mountain, Southwest, Midwest, Southeast, and Northeast) (Figure 5). Below in Figures 6-11 you'll find each state's sectoral distribution of employment in the year 2050, per region. 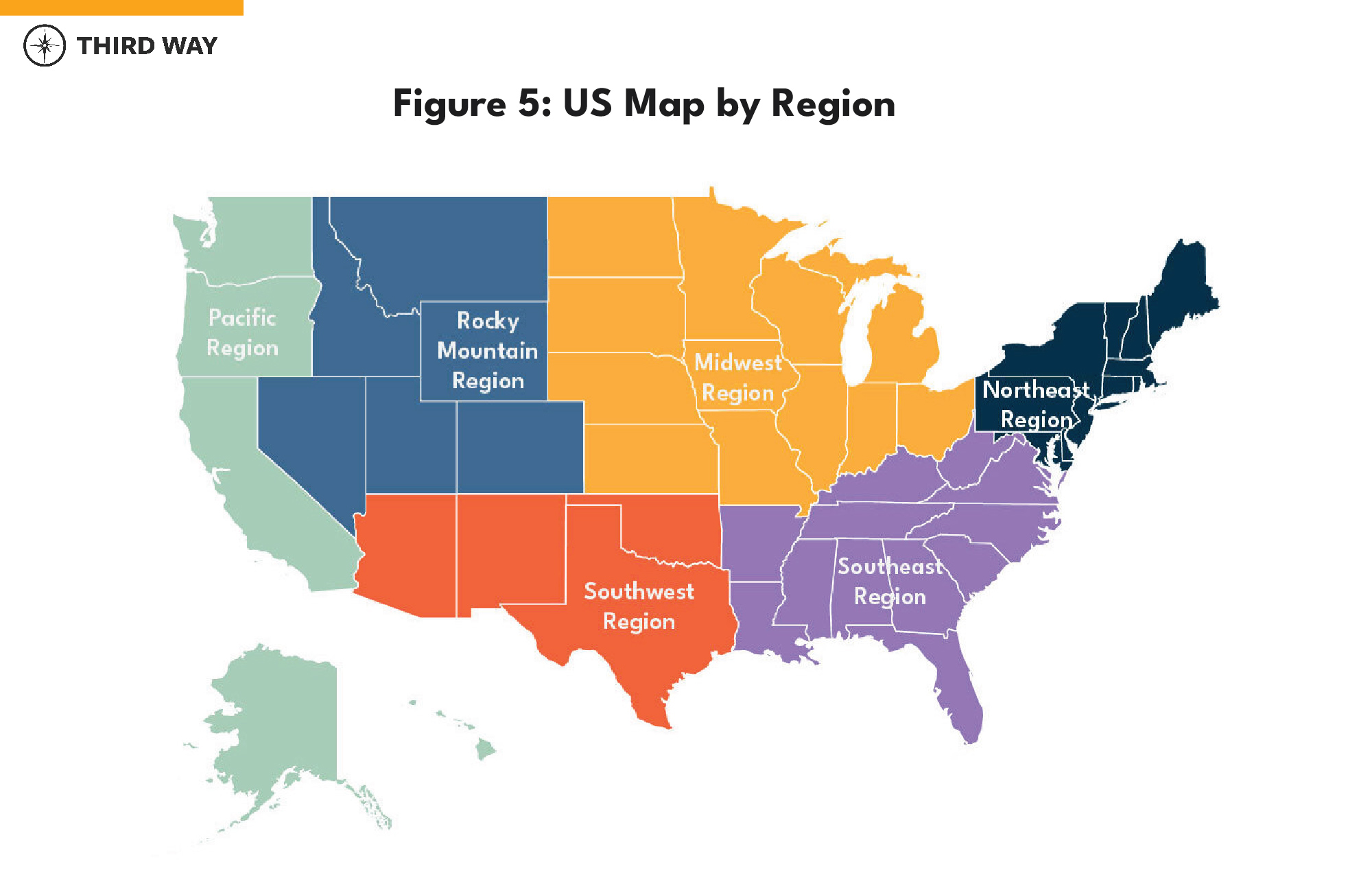 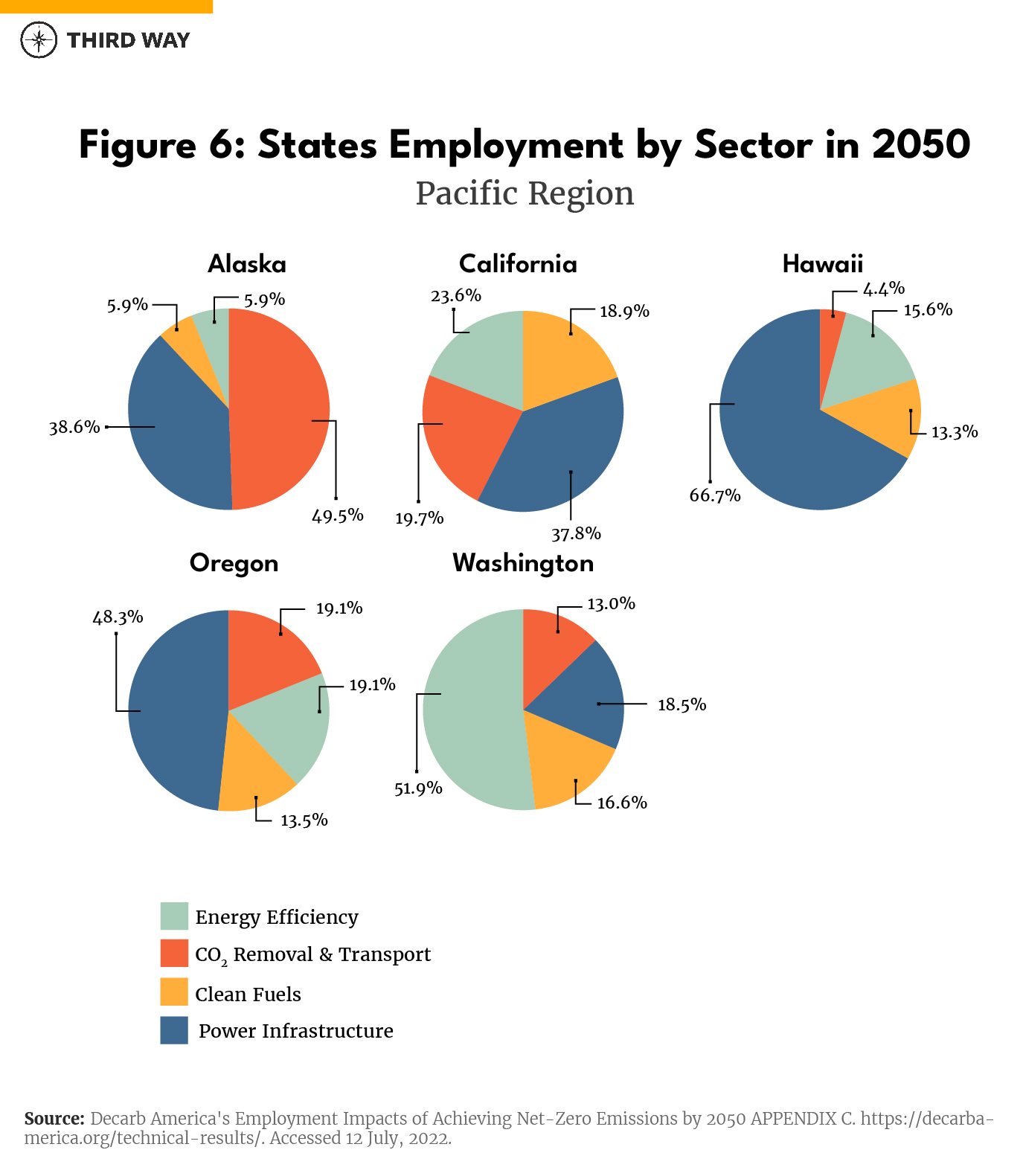 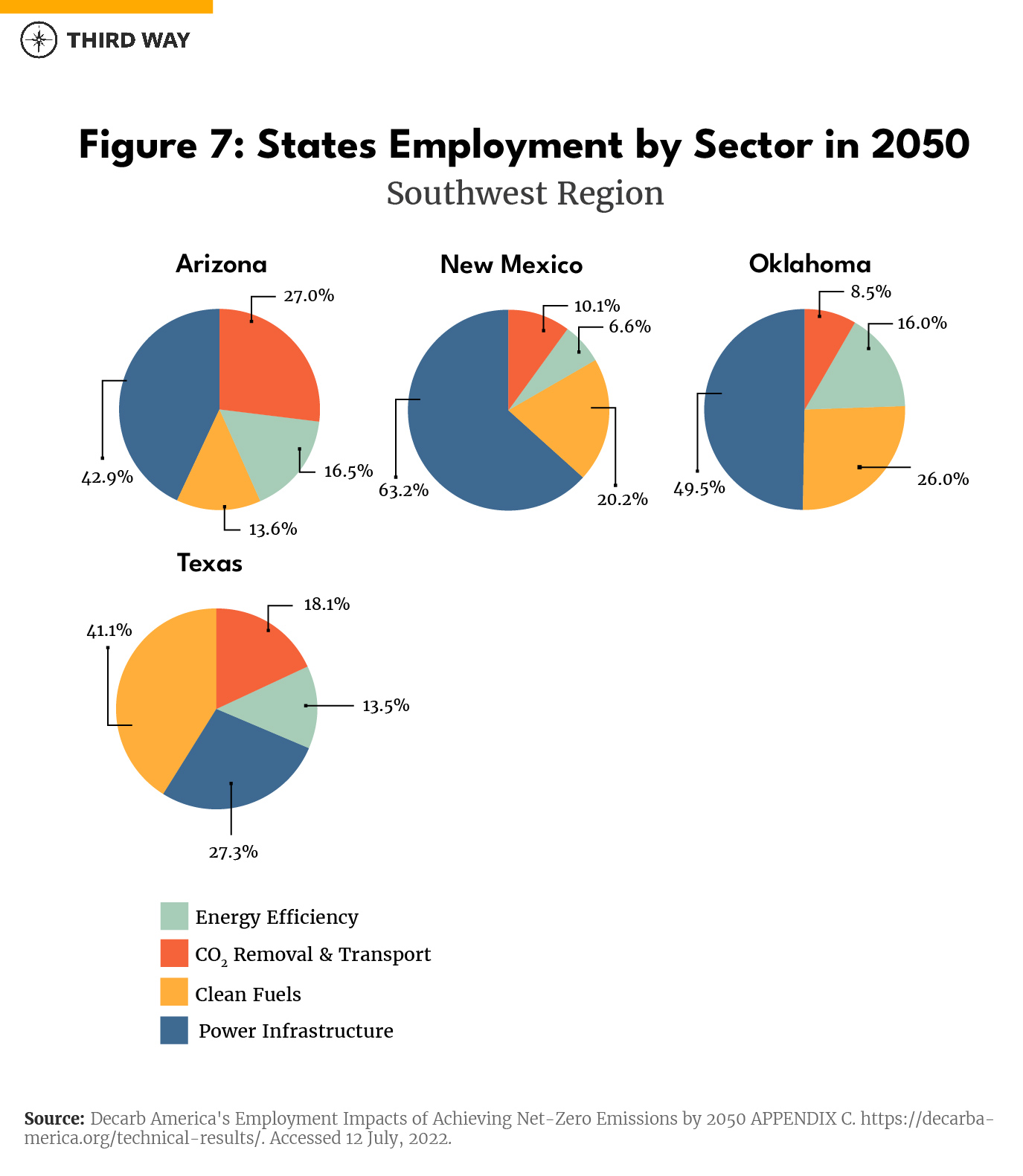 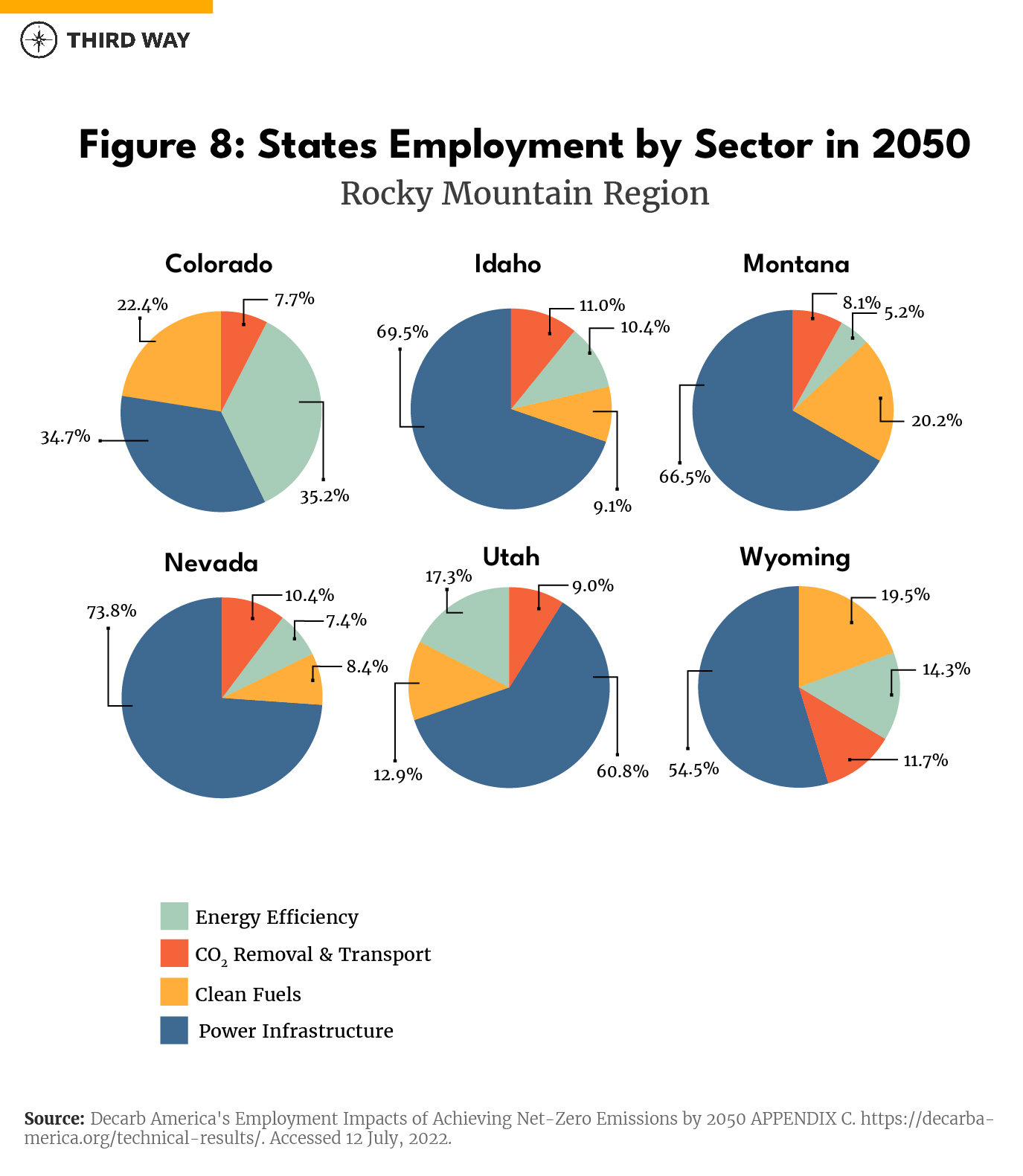 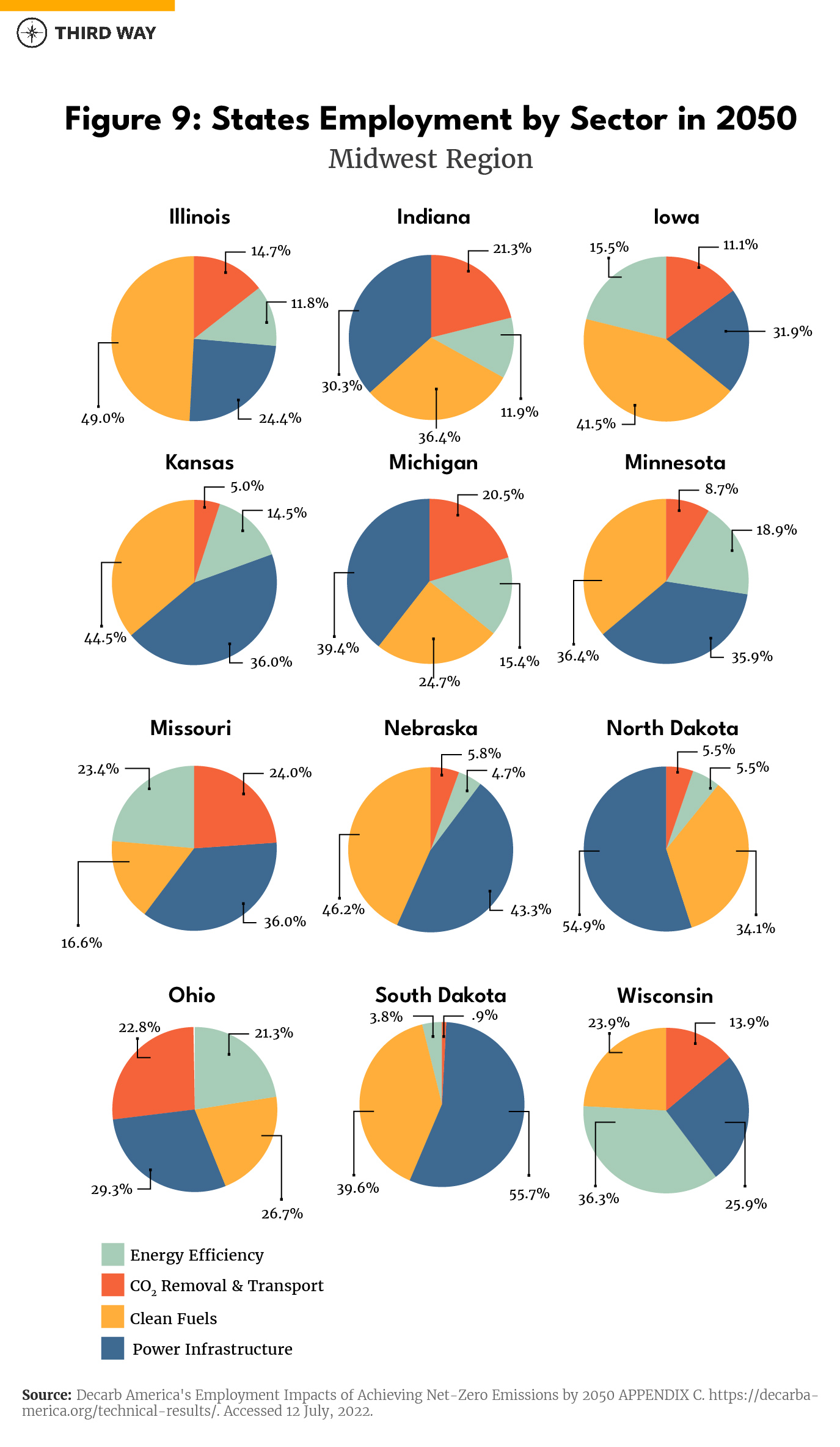 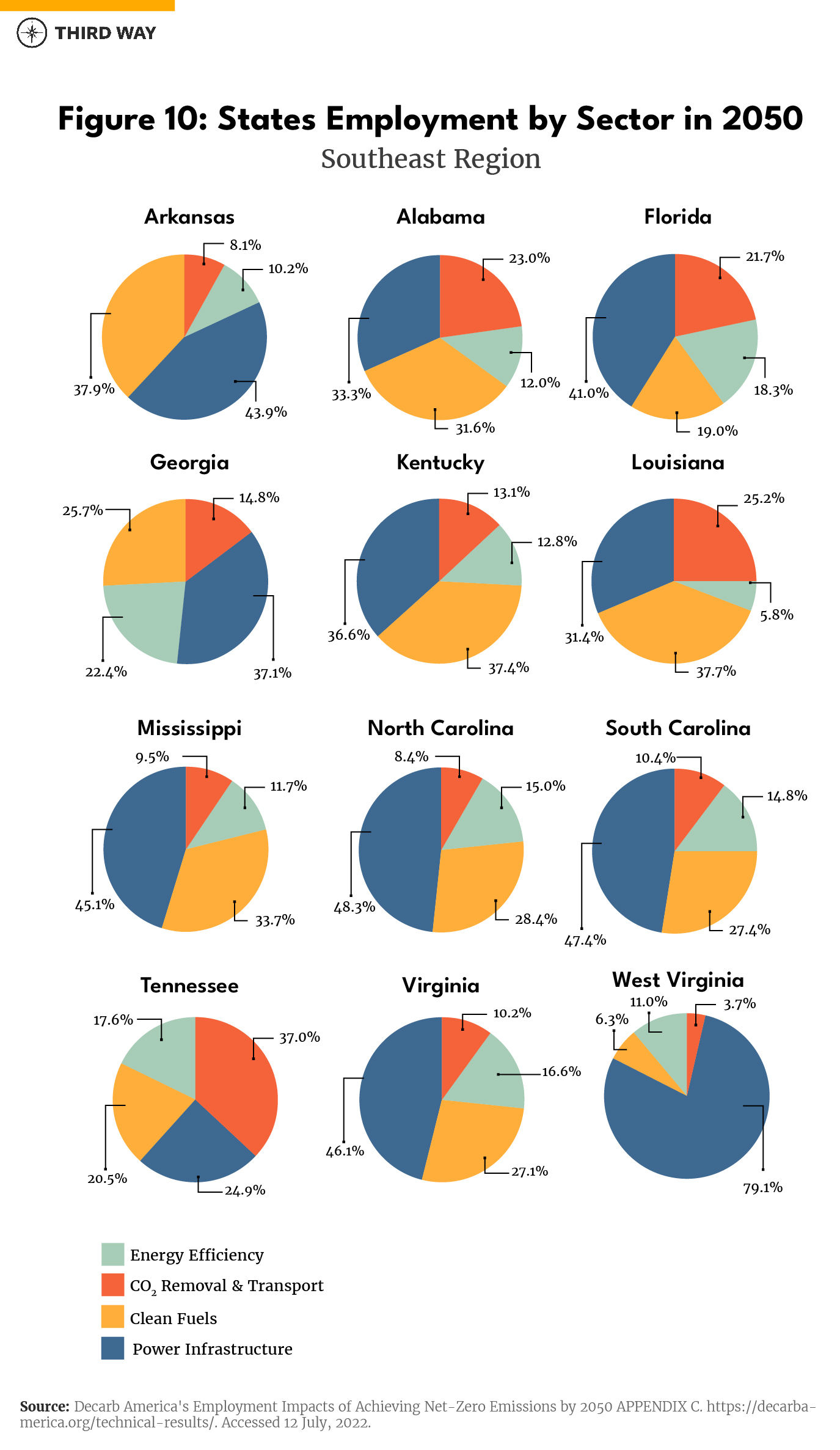 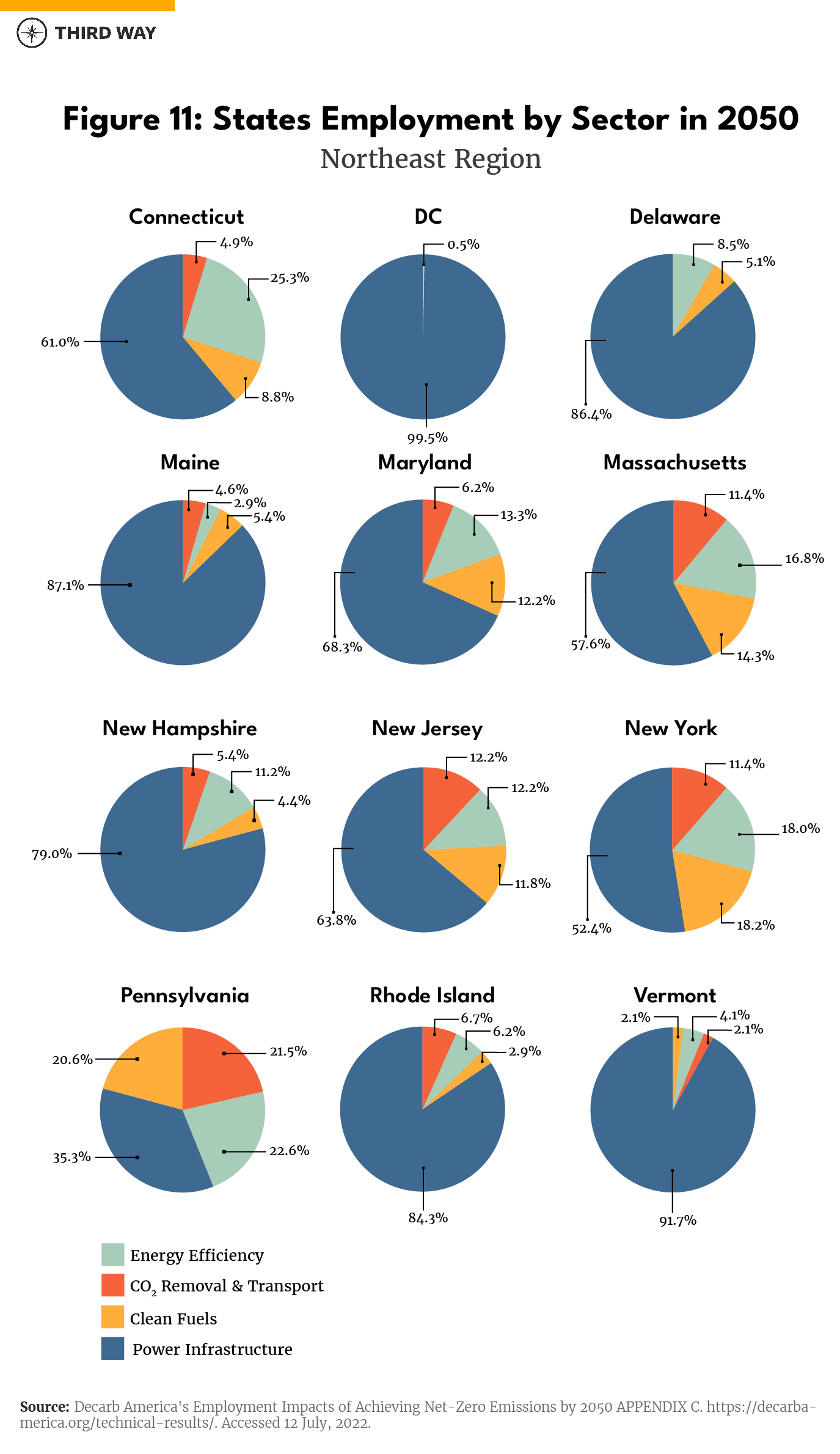