Joe Biden and Democrats won a democracy-saving election in 2020. They won because voters trusted them to get COVID-19 under control, bring the country together, and get things done in Washington, DC. But they also won without the full trust of voters on the economy. In one post-election survey, a plurality of voters said that jobs and the economy was their top issue, and they voted for Trump over Biden by a 60–25% margin.

Democrats’ economic trust gap extends back before 2020, but it is particularly acute today. Americans trust Republicans over Democrats on which party can better manage the economy, despite decades of evidence that the economy and jobs grow faster during Democratic administrations. Even before the COVID-19 Delta variant disrupted the nation’s economic recovery, a June survey from Third Way and ALG Research put Democrats’ economic trust gap at 12 points (46–34%).

Democrats’ economic trust gap puts them on perpetually unstable electoral ground, where they must hope a confluence of events creates a positive (but often fleeting) political environment that can overcome voters’ enduring skepticism about how they will handle the economy. The bottom line is that Democrats will never be able to win everywhere necessary to build stable and sustainable majorities until voters know that they are working on behalf of their economic interests. That is why Third Way has undertaken a public opinion research project with ALG Research to get at the root causes of Democrats’ economic trust gap. We hold no illusion that we can immediately fix this gap; it is a years-long challenge that will require a multi-player effort to address.

This memo serves simply as a starting point. It lays out what we know about Democrats’ persistent economic trust gap and its consequences for the party’s long-term power buildingd. Acknowledging Democrats’ economic trust gap is in no way an indictment of the Biden administration’s initial economic progress. These efforts have been popular and urgently needed (in fact, in our latest survey, Biden’s net rating on the economy was 16 points higher than Democrats as a whole). But it is a recognition that despite holding the White House and slim majorities in both Houses of Congress, Democrats still have work to do in making their economic case to the American people.

What We Know About Democrats’ Economic Trust Gap

Every year, Gallup asks Americans which party will do a better job of making the country prosperous in the next few years. Before 2009, voters typically sided with Democrats on this question, and during the Obama presidency, voters see-sawed in their views. But since 2013, Democrats have regularly trailed on this measure. Not once during this period has a majority felt Democrats are better on improving prosperity in this country.

The Democratic Party’s economic trust gap is a multi-layered problem. Voters do not associate Democrats with many economic values and traits that are important to their economic self-interest. They do not believe the party is best positioned on economic issues that are important to their lives. And with these shaky foundational connections, it’s easy for Democrats’ message on the economy to miss the mark as well.

We conducted a post-election national survey after 2020 with the GBAO Strategies team, presenting voters with economic values and traits and asking whether they better described the Democratic Party or the Republican Party. This line of questioning exposed troubling shortcomings for Democrats. On positive traits, voters said the Republican Party better represents hardworking people by 10 points (among Independents by 16). Similarly, they said the Republican Party is the one that believes in the dignity of an honest day’s work by four points (with Independents by nine). But they associated negative, or personally harmful, economic traits with Democrats. By 30 points (36 with Independents), voters described Democrats as the party that wants to raise their taxes. And while voters believe government should do more for low-income people, they said Democrats are more concerned with the poor than people like them by 35 points (among Independents by 32). 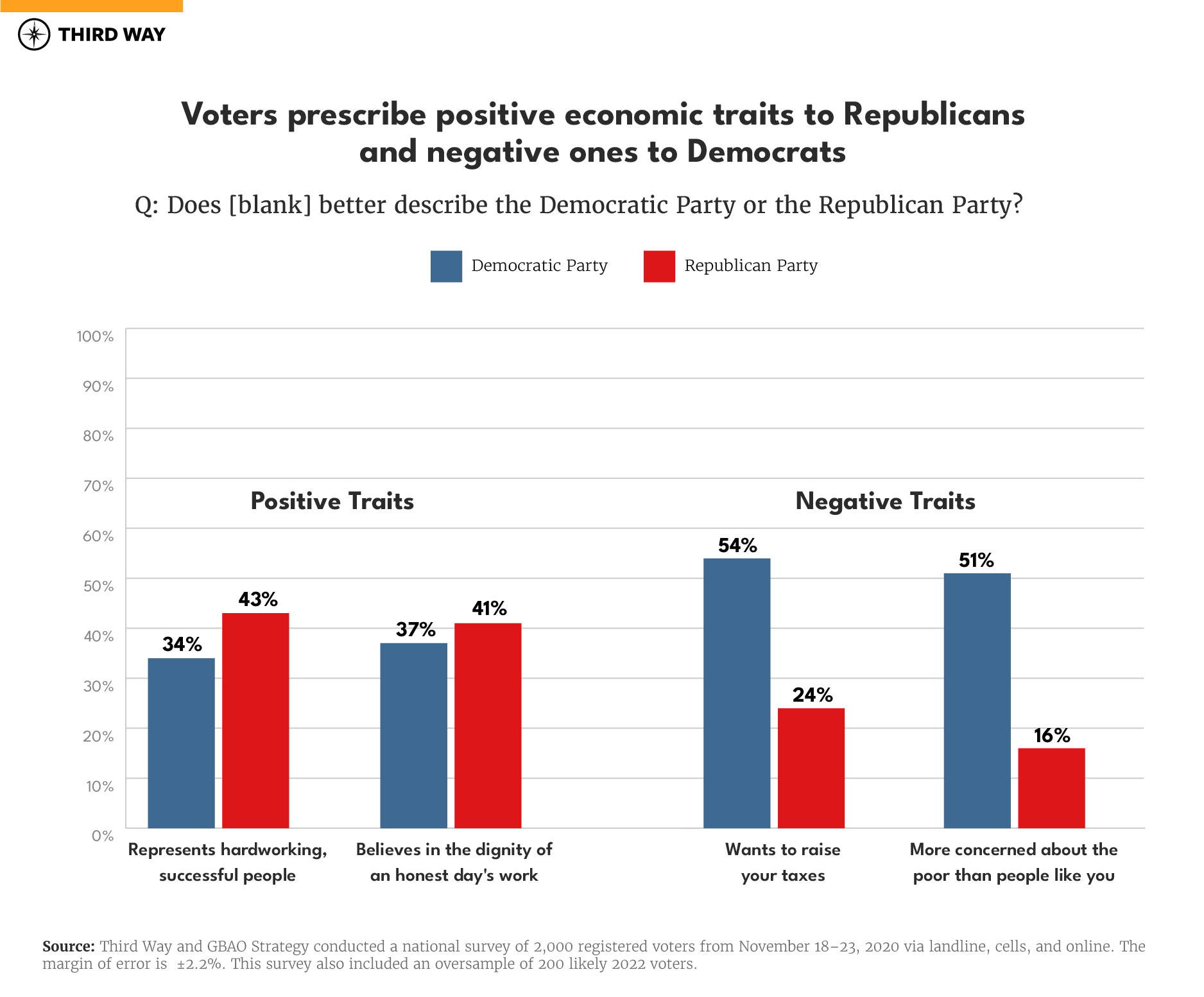 Without full faith in Democrats’ economic traits and values, many voters do not believe that the party is best positioned to handle economic issues. In our June survey that identified Democrats’ 12-point deficit on managing the economy, voters also preferred Republicans on creating jobs, fighting outsourcing, keeping Americans out of debt, and creating opportunity. Voters do have more confidence in Democrats regarding kitchen-table issues, like getting people a raise and supporting working parents. Notably, Democrats have a 20-point advantage on making health care, housing, and education more affordable. In particular, health care is a winning issue for Democrats right now, as it was in the last midterm election in 2018. However, it is not clear that voters perceive it as an economic issue, despite it being important to them. 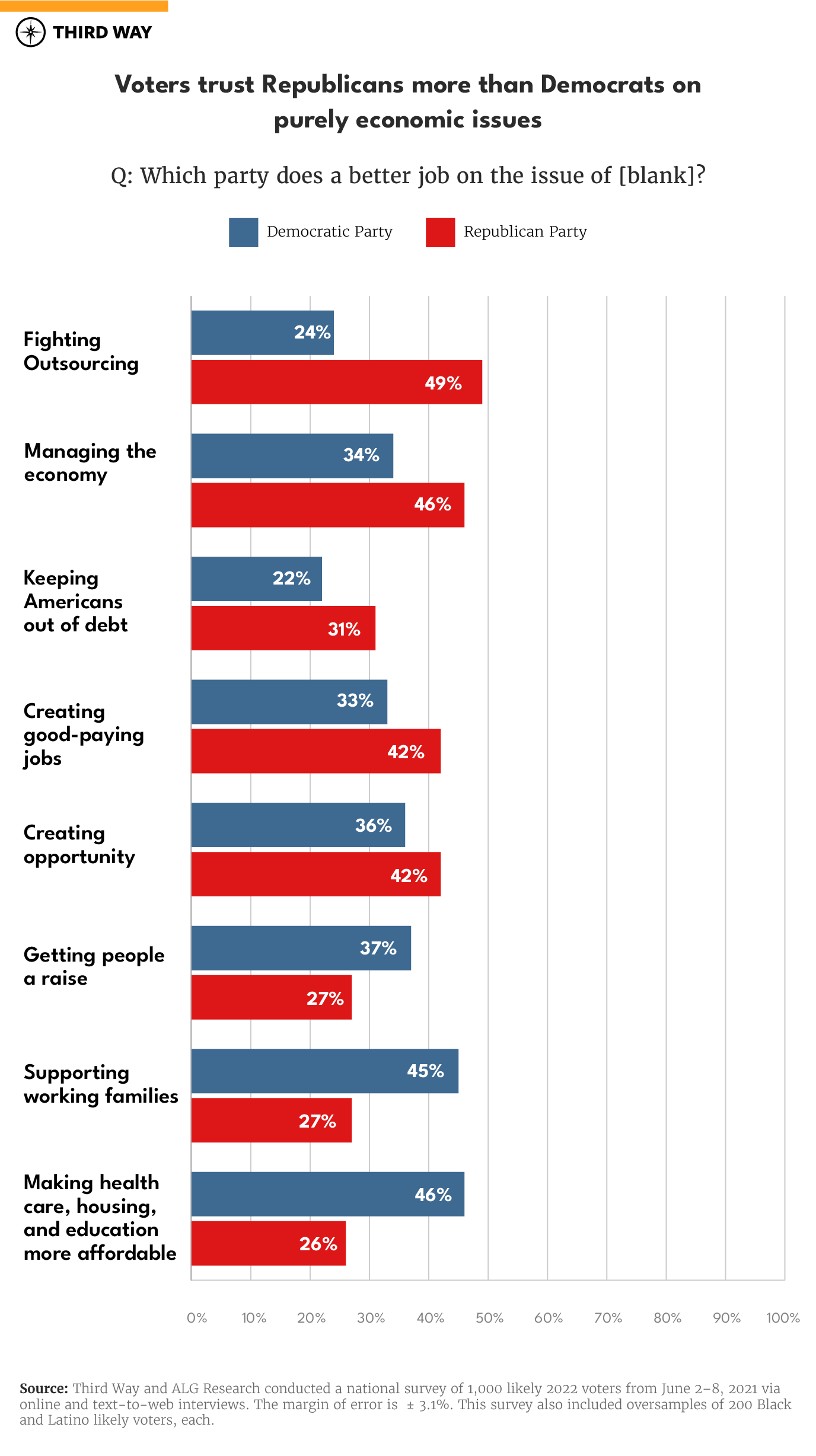 The Biden administration’s first-year economic agenda has been popular and urgently needed in these challenging times. But despite this success, Democrats, as a whole, still lag behind Republicans on core economic traits and issues, and they do so even with a better track record on the economy going back decades. If Democrats want to compete and win in the places necessary to build sustained electoral power, they must address their economic trust gap.

Democrats’ economic trust gap puts them in a precarious position. They must hope that other electoral factors break their way to overcome voters’ skepticism about how they will handle the economy. This worked in 2020 when Biden and Democrats convinced voters they’d be best at getting COVID-19 under control—which most thought was a prerequisite to getting the economy back on track. But no such issue buoyed Democrats in 2016 or 2014, and Democrats up and down the ballot suffered the consequences.

Historical public opinion data indicates that Democrats’ economic trust gap has affected their electoral support for some time now. Analyzing American National Election Studies (ANES) data back to 1984, we looked at the voting behavior of people who said their finances had become “much worse” in the previous year, with the assumption that these voters are most attuned to the economy when making their vote choice. Democrats used to dominate with these struggling voters. Bill Clinton won 79% with them in his victorious 1992 campaign, but Walter Mondale also won 68% in the Republican wave election of 1984. But there’s been a consistent downward trajectory in Democrats’ support with these voters since 2004. Kerry matched Clinton’s support with these voters at 79%, but Obama’s support dropped to 68% in 2008. And since 2012, Democrats have only won one-in-three of these voters. 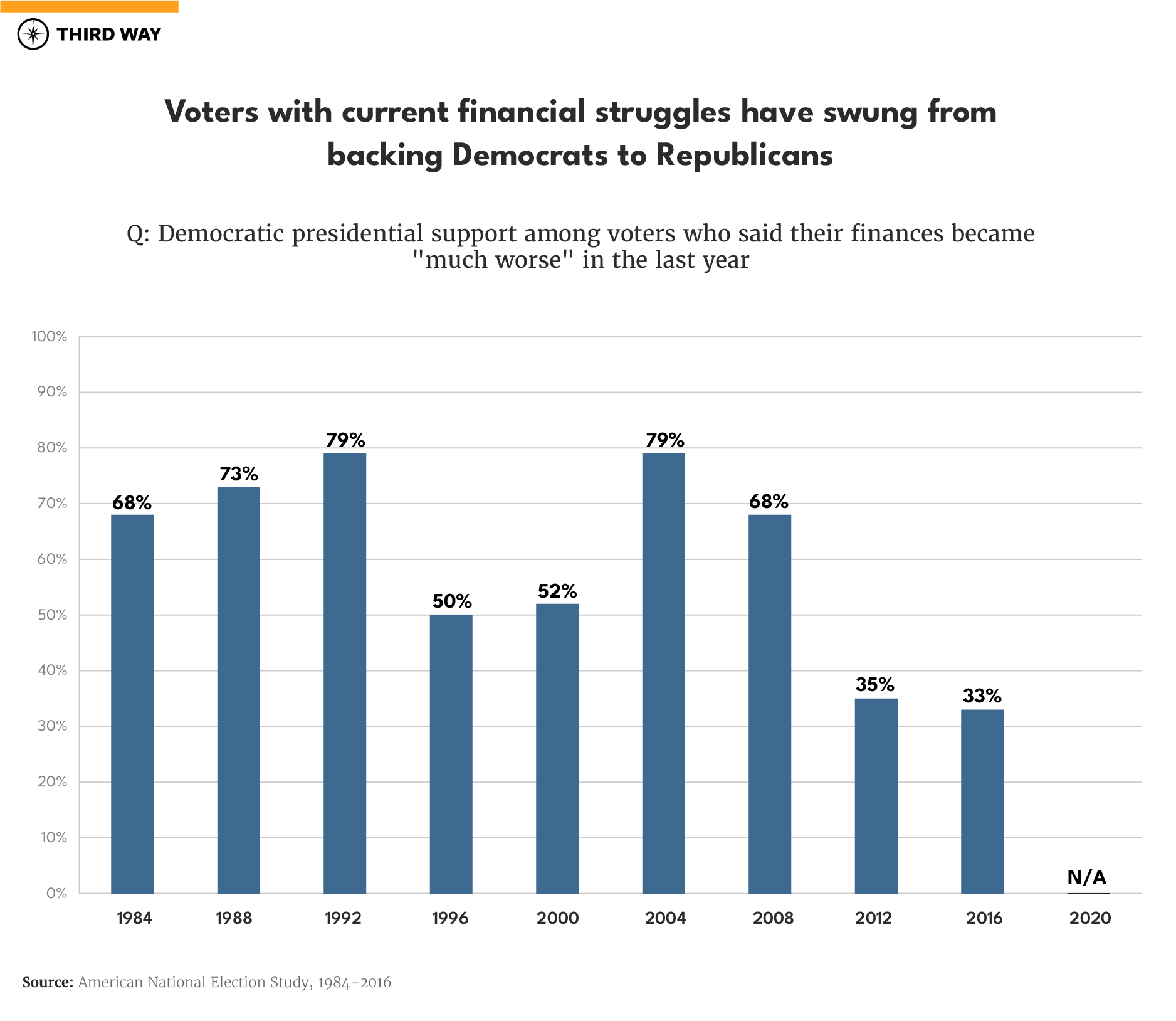 Biden’s unique brand and voters’ belief that Democrats could get COVID-19 under control helped the party win despite the economic trust gap in 2020, but Democrats may face consequences at the ballot box if it is not addressed ahead of 2022 and 2024. Looking at data from exit polls in 2020, Democrats face dramatic deficits on the economy with the voters to whom it matters most in 2022 swing states. In Pennsylvania, Democrats lost by 70 points with voters who said the economy was their most important voting issue. In Wisconsin, they lost that group by 72 points, by 75 in Georgia, and by 83 points in Arizona. In Ohio, where Sherrod Brown will be up for reelection in 2024, Democrats suffered a 79-point deficit with that slice of the electorate. In part, these 2020 numbers reflect Republicans prioritizing the economy over COVID-19 last year, but the extent of the margins cannot be dismissed on those grounds alone.  To maintain their narrow Congressional majorities and hold onto the presidency for another four years, Democrats need to address the economic trust gap—and quickly.

Democrats face an enduring economic trust gap: voters have more confidence in Republicans on the economy and their financial well-being. This puts Democrats on tenuous electoral ground, where they must hope that other major issues break their way to win elections. This is not a viable path forward for strong, enduring majorities. Historical data suggests that Democrats have suffered electorally from the economic trust gap for at least the last decade, and it stood at 12 points through June of this year. President Biden’s and Democrats’ focus has rightly been on delivering urgent economic support as we work to overcome COVID-19, but to sustain electoral power, it is also essential that the party build back foundational economic trust with the American people. This begins by Democrats aligning themselves with Biden’s brand on the economy, which is far more popular than the party’s as a whole, even in these turbulent times.