As institutions of higher education increasingly pivot to online learning due to the current Covid-19 pandemic, students are beginning to ask more questions about what value they’re getting for the tuition checks they write. “Will I receive the same quality of an education if I’m taking classes on a computer? And, if I’m paying the same amount, where exactly are my tuition dollars going?”

Even before the pandemic, students were left in the dark about how institutions spent their money, unaware of how much goes toward their own academic benefit versus other activities, like marketing and recruitment of new students or payments to administrators or stockholders.1 Yet several research studies show that instructional spending—especially at four-year institutions—correlates with a higher likelihood that students will persist, graduate, and find a good job after attending.2 So how are federally funded institutions spending the money that they receive from taxpayers and students?

To examine this question, we looked at the US Department of Education’s (Department’s) 2018 Integrated Postsecondary Education Data System (IPEDS) Finance Survey, which provides information on how much institutions say their education is worth (which includes all tuition and fees, grants, and scholarships) relative to the proportion spent on actual student instruction.3 While certain student services may also increase persistence and graduation rates, the Department currently combines other activities—such as marketing and advertising—into this category of institutional expenditures, making it difficult to discern whether the dollars categorized this way are actually being used to support students who enroll in an institution.4 Therefore, this analysis focuses on gross tuition dollars spent directly on actual student instruction. In total, our analysis included 5,142 institutions that received $109 billion in federal student aid during the most recent award year.

Many Institutions Spend Less than Half of Tuition on Instruction, and For-Profit Schools are the Worst Offenders.

The good news is that more than half of institutions in this analysis spend more of students’ gross tuition and fees on instruction than on non-instructional expenses, with nearly one-in-three schools spending even more on instruction than what they charge students to attend. Yet, 46% of these federally-funded schools—2,344 out of the 5,142 institutions in our analysis—spend less than half of gross tuition dollars on actual instruction for their students. Even worse, one out of 10 allocate less than a quarter toward teaching and learning. This means that at 532 institutions, for every dollar they say their education is worth, 75 cents or more are ultimately spent on other activities outside of actual instruction. 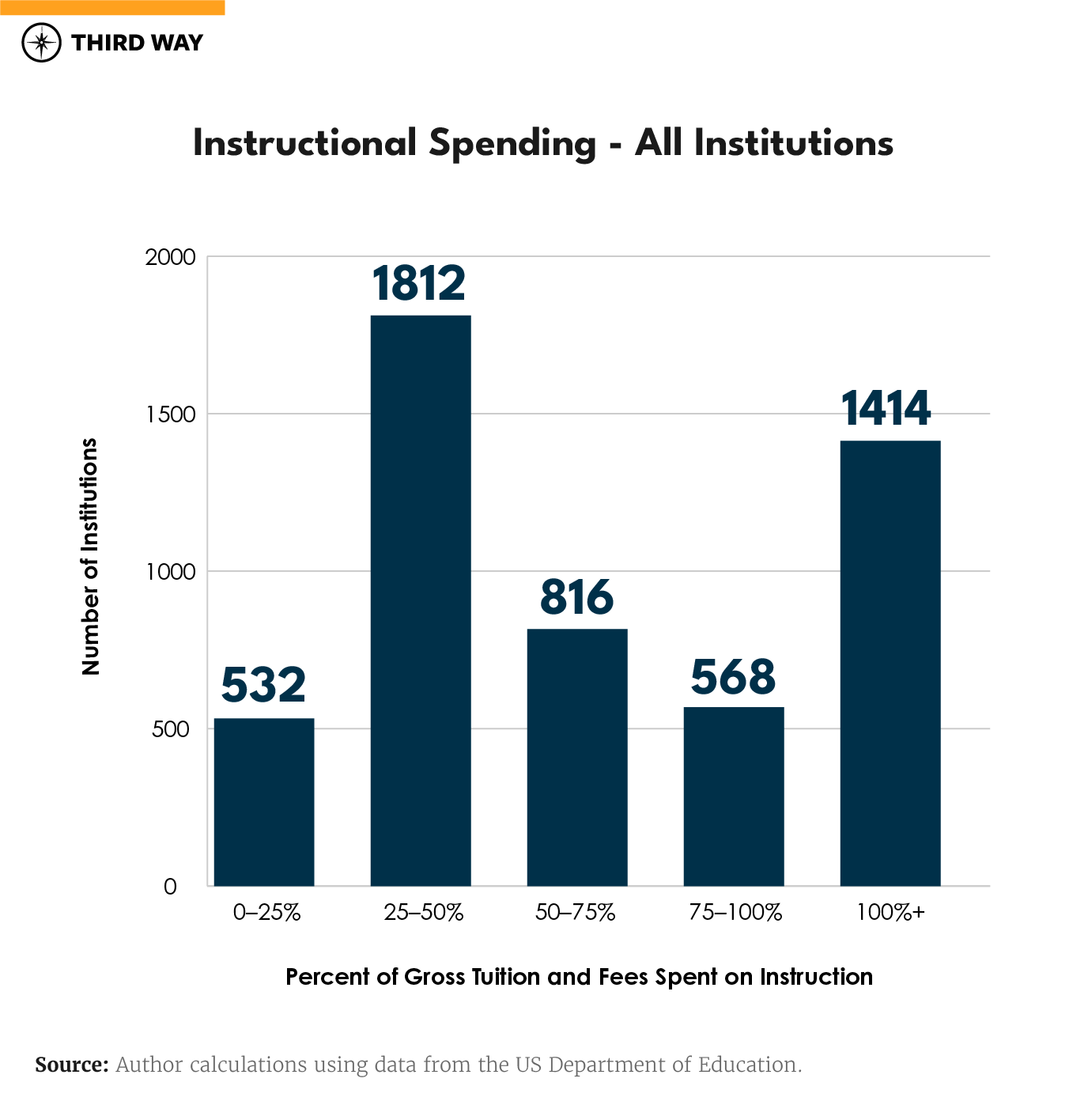 A deeper look at the data also reveal disparities in instructional spending between educational sectors, whether they be public, private non-profit, or for-profit. For example, for-profits disproportionately spend less on instructional activities than their public and private non-profit counterparts, with nearly a quarter spending over 75 cents of every tuition dollar on other activities outside of student instruction, compared to less than 1% of publics and 9% of private non-profits. Furthermore, our analysis shows that of the 532 institutions that spend less than 25% of gross tuition on instruction, for-profits make up 383 (72%) of them, which raises questions about where students’ and taxpayers’ money is actually going. 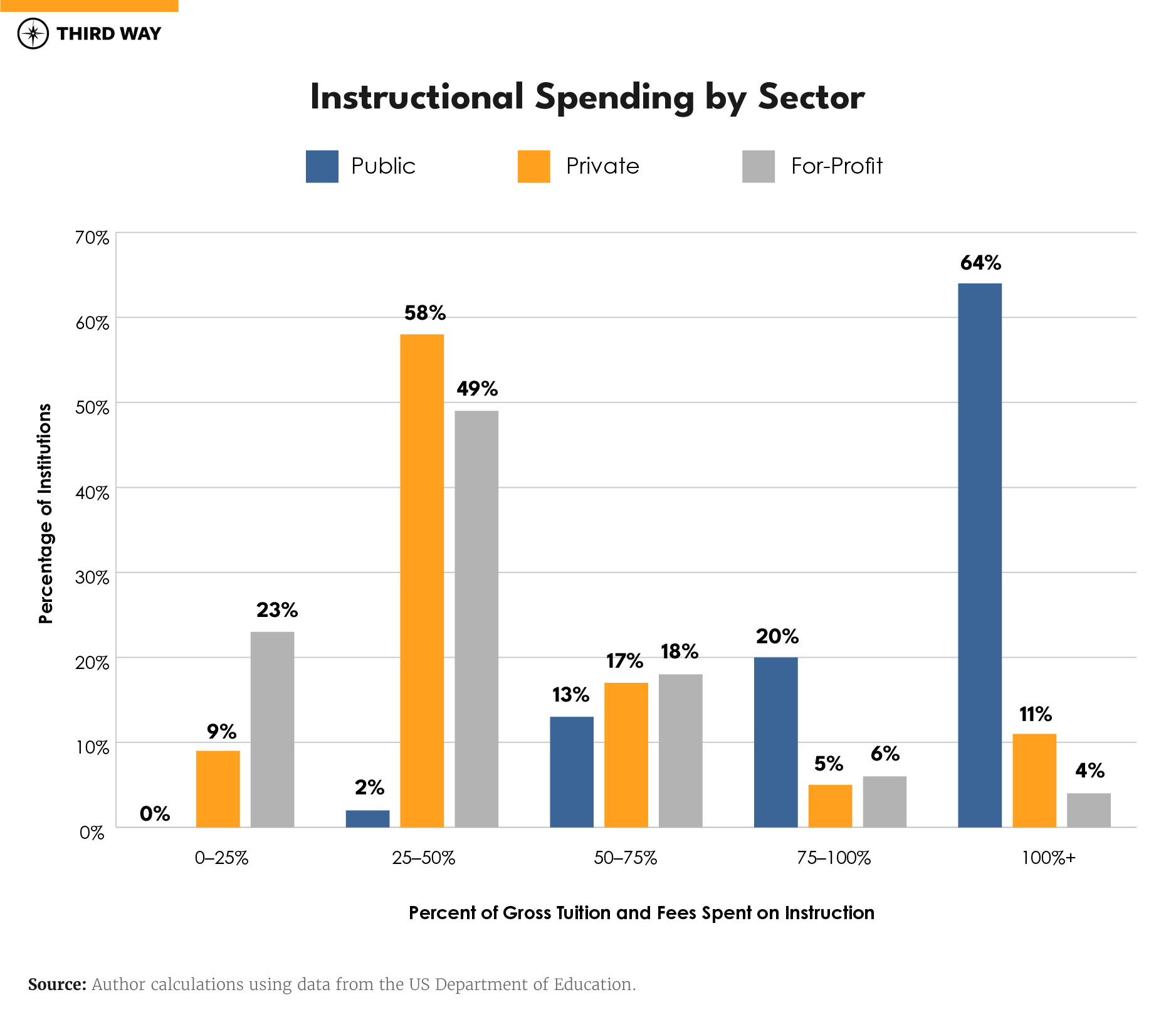 Even though the data are clear that many institutions are spending a minimal amount on actual instruction, there are no laws in place to restrict the amount of funds they receive from the federal government or that require them to spend taxpayer money on teaching and learning. To determine how many taxpayer dollars went to institutions that are investing little in actual instruction, we used data from the office of Federal Student Aid, which provides the amount of federal student loans and grants that flowed to these institutions during the most recent award year.5 What we found was hundreds of millions of federal dollars flowing to institutions that provide students a minimal instructional bang for their educational buck. 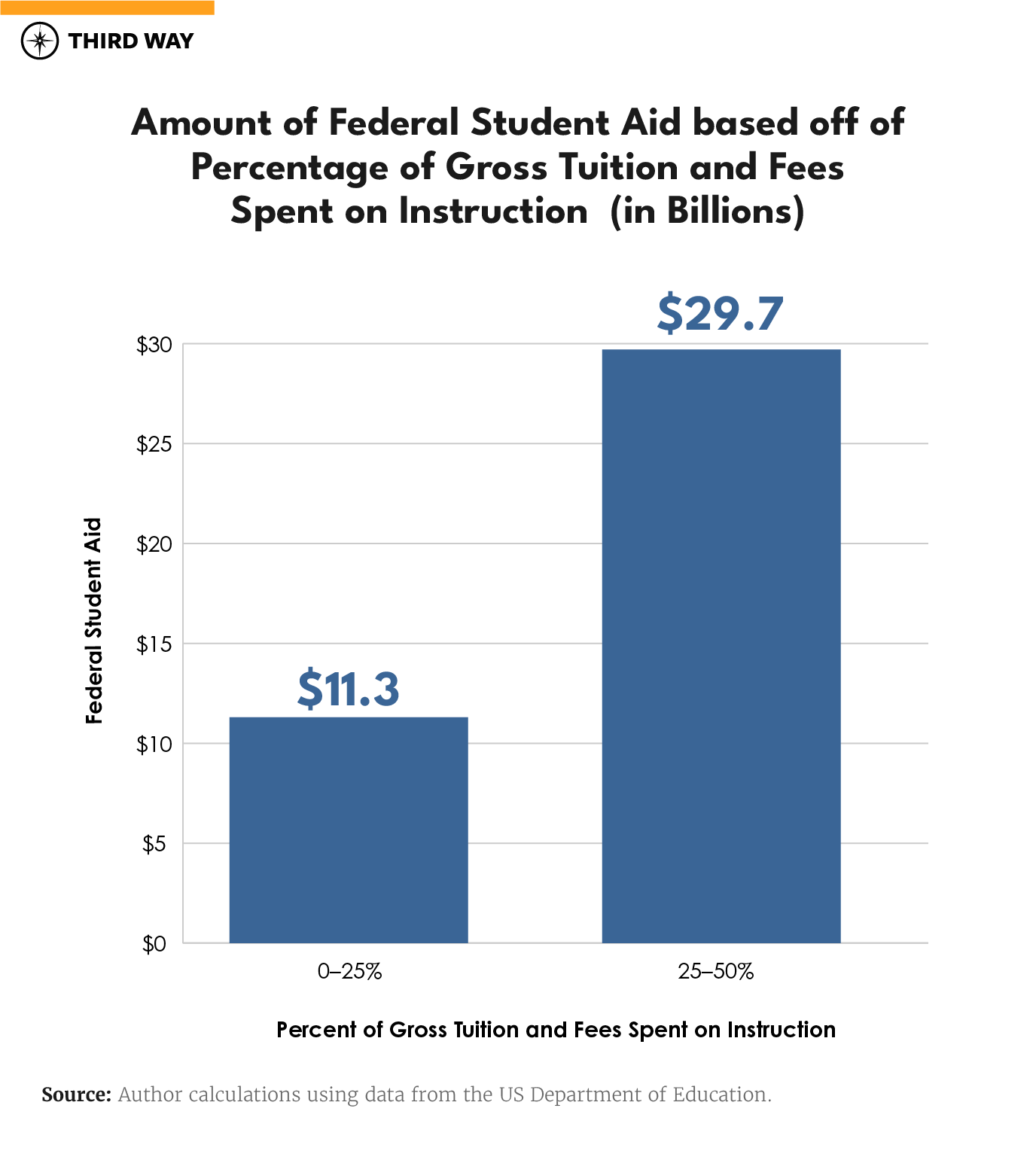 In the most recent year, institutions that allocated less than a half of gross student tuition dollars toward instructional activities received $40 billion in federal student aid funds (excluding campus-based aid), with $11.3 billion flowing to institutions that allocated less than a quarter of gross tuition dollars toward instruction. And these figures don’t even account for federal money received through the GI Bill, which can also be in the tens of millions at individual institutions, especially at for-profit colleges that heavily recruit veterans.6 If these $11.3 billion in federal funds were allocated proportionally at the schools that spend less than 25% of tuition on student instruction, it would mean more than $8.4 billion in aid that taxpayers sent to these institutions went toward other non-instructional activities.

The numbers become even more staggering when you examine the institutions that received the most federal student aid and fail to invest in teaching their students. 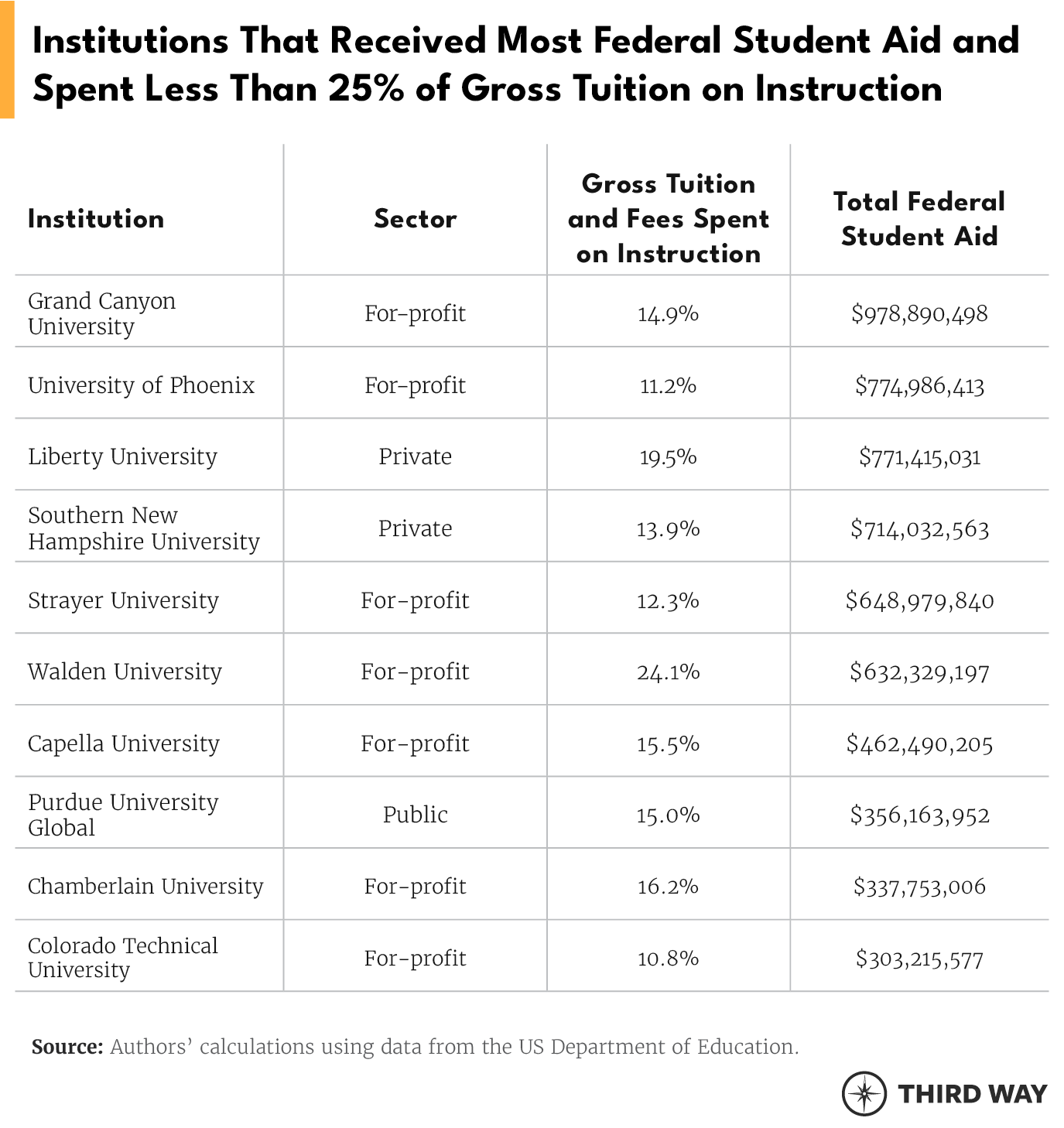 These institutions are mainly for-profit institutions that focus on online education, a trend that has grown during the current pandemic. These data echo a 2012 Senate7 report that found many of the largest for-profit online education providers spending more on marketing than student instruction. Regardless, this money continues to flow without any restrictions, no matter how institutions spend the federal dollars they receive or the outcomes they produce for the students they enroll.

As students flock back to higher education classrooms throughout the pandemic—whether that be through in-person or through virtual learning—they are demanding to know what exactly they are paying for.8 And with billions in federal student aid flowing to institutions every year, and even more in GI Bill funds, is it appropriate for institutions to spend so little on actual instruction?9 Some in Congress have recommended ways to address this.10 For example, one proposal suggests that if an institution fails to show good outcomes for its students AND spends little on actual instruction, it should be required to inform students of their poor outcomes, or even risk losing access to federal student aid dollars. Another possibility would be to make this information publicly available to all students before they enroll. Just as they receive a receipt for their groceries, Congress could require a “Receipt for Higher Education” which allows students to see how their money is being allocated for each tuition dollar being spent.11 Without this kind of additional transparency and oversight, higher education will remain one of the few—and most expensive—endeavors that people make with little to no knowledge of exactly what they’re paying for.