The coronavirus has unleashed widespread health and economic devastation. More than 38 million Americans were laid off from work over a nine-week stretch, and more layoffs are coming. More than 100,000 small businesses have closed permanently.1 Numerous other large and small employers have filed for bankruptcy. Communities with large proportions of people of color are getting decimated.2 And the Congressional Budget Office joined a host of other economists in noting that the recovery will extend deep into next year—if not longer.

Once the health threat subsides, the hope is that more businesses re-open and others are started. But with economic disruption likely for some time, there’s no guarantee that wages will be anything close to adequate once jobs do materialize. For example, Black and Hispanic households are overly represented in lower-wage service work that is either hardest hit or essential in these times.3 Further, wages have been stuck, particularly at the lower end, for much of the last two decades. Automation and globalization help many but also depress wages for many others. In addition to a huge expansion of the safety net for the unemployed and a bold plan to create new, good-paying jobs to help dig our way out of this crisis, we also need a massive federal response to make sure more American workers get a raise and we can rebuild the livelihood of low-wage workers.

Part of that solution is raising the minimum wage, which is long past due. But with substantial business closures and many more employers struggling to stay afloat, there will be immense pressure to wait even longer to raise our inadequate $7.25 national floor.4 We must keep the pressure on raising the wage floor, but we have another tool in place that can help millions of families: the Earned Income Tax Credit (EITC). The EITC has helped working-wage families for almost half a century, but now it’s time to expand this essential program. And since over half of EITC eligible taxpayers are people of color, an expansion provides an important (although not nearly large enough) step toward economic equity.5 In this paper, we propose new features to make the EITC better, more modern and generous, and more attuned to the challenges of the workforce. For the over 22 million people eligible for the EITC, everyone will get a raise.6 And millions of others will also see new benefits.

Coupled with existing proposals to hopefully raise the minimum wage, this would ensure that all full-time work allows people to make ends meet. It would give working-wage people a needed raise, ensure that the government has people’s backs, and guarantee what Senator Sherrod Brown calls “the dignity of work.”7 The main features include:

What is the EITC?

The EITC is one of the most successful federal anti-poverty programs that helps people while encouraging work. In 2018, over 22 million families benefited from the EITC. The average benefit was about $3,200 for a family with children or about $300 for those without children.8 According to the Center on Budget and Policy Priorities, the EITC brought 5.6 million people out of poverty in 2018.9 But we’ve gone seven years since the last modest expansion of the EITC. With the coronavirus recession expected to put downward pressure on wages for long into the future, it’s time to expand this program even further. To do that, however, it’s important to understand how the EITC works.

The EITC provides low- and middle-income working Americans with refundable tax credits based on the number of children they have. And if a worker owes less in income taxes than the credit they qualify for, the Internal Revenue Service refunds the difference with their yearly tax return.

The amount of this credit “phases in,” providing a wage subsidy for every additional dollar earned up until a maximum benefit is reached. To keep the system progressive, the credit eventually “phases out,” where each additional dollar earned or received reduces the benefit down to zero. Eligible couples who file jointly receive a later phase-out than single filers. 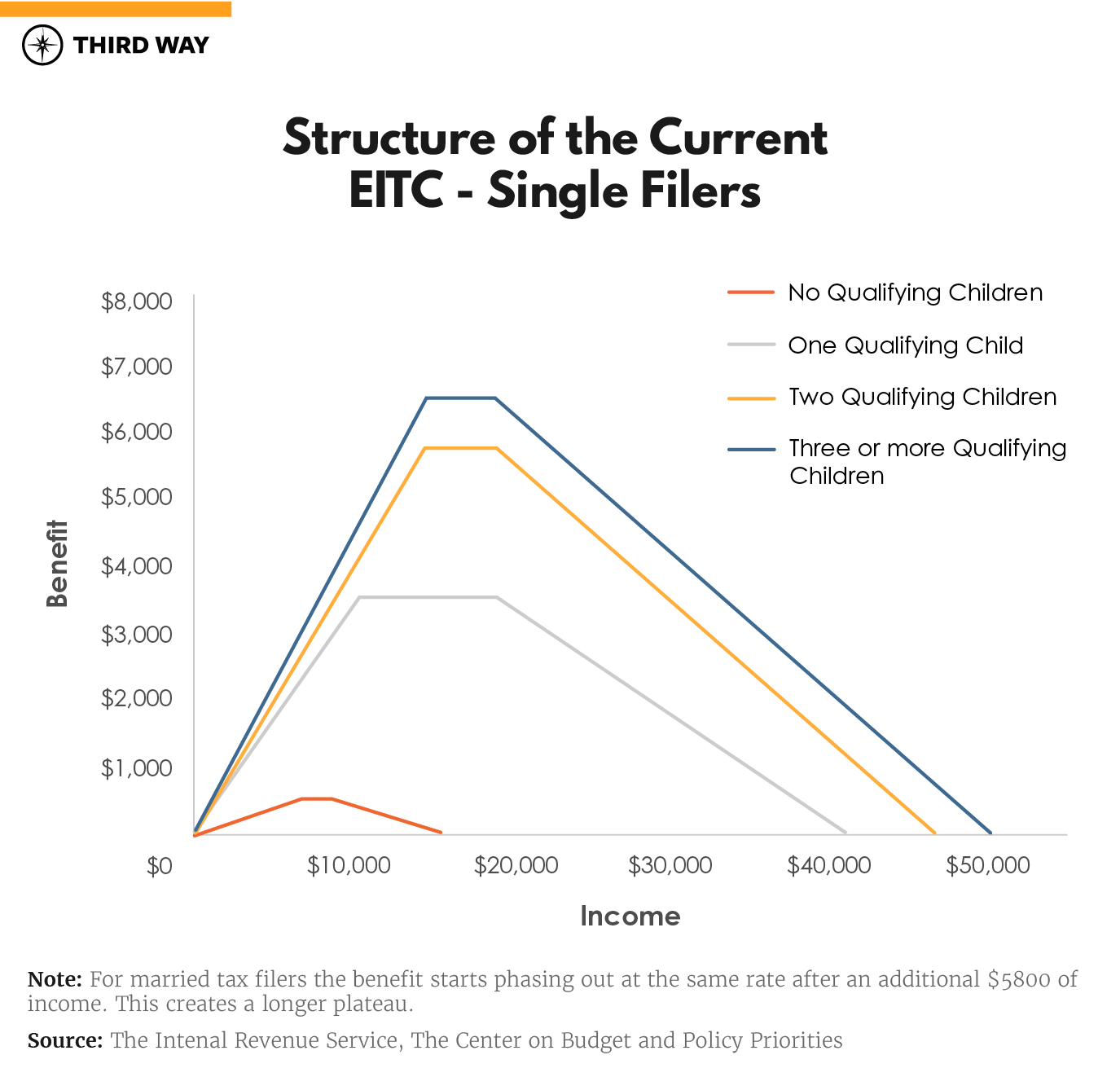 There have been many public proposals to expand the program over the past few years. One proposal, the Working Families Tax Relief Act from Senators Sherrod Brown, Michael Bennet, Dick Durbin, and Ron Wyden, dramatically enhances the reach and effectiveness of the program. Specifically, among many changes, the bill would: 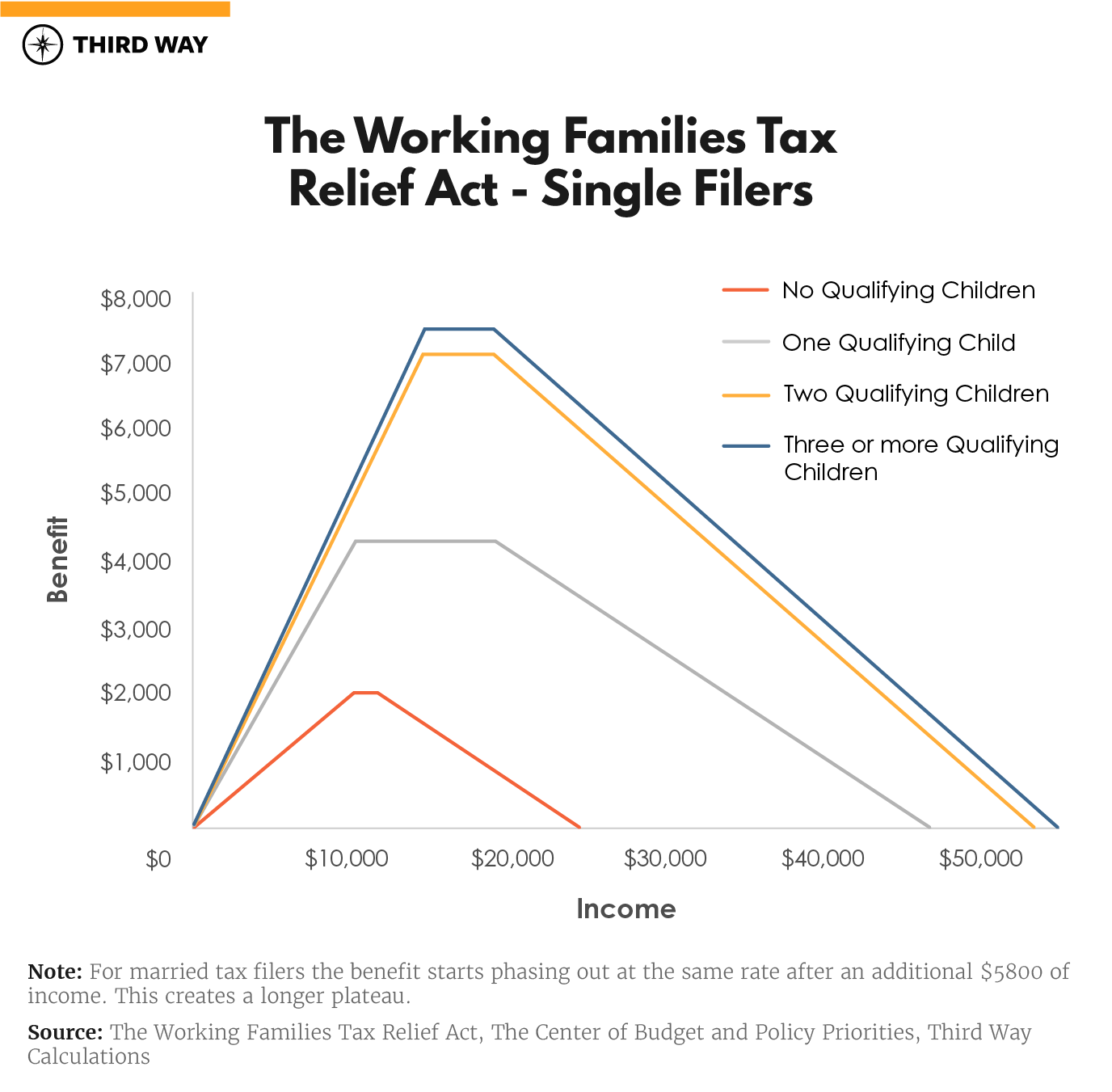 America’s Raise: A Proposal to Expand the EITC

It’s time for a big and bold effort to make the EITC even more generous, modern, and more attuned to the challenges of today’s workforce. This expansion of the EITC should include five components.

1. A raise for everyone

First, an expansion should include an across-the-board increase of the EITC in line with the Working Families Tax Relief Act.11 Currently, the EITC provides a modest benefit for low-income working families with children. For a single mother or father of one child making $10 per hour, the current EITC provides an additional 16% to their income, about $3,300.  Further, the current benefit structure for the EITC provides essentially no help for workers without dependent children. The benefit maxes out at $530 and phases out entirely at about $15,000 (or essentially the federal minimum wage worked full time).

We must do better. We should adopt all EITC benefit expansions from the Working Family Tax Relief act. This would first give an across-the-board bump in all EITC payments to families with children by 15 to 25%—a raise of close to $1,500 for a two-child family. Further, workers without dependent children would get a raise of up to $1,765—nearly quadrupling their existing childless EITC benefit.  The childless benefit will help both younger workers and older workers who no longer have dependents.12

This is a substantial increase in income for the over 22 million Americans who already qualify for the EITC. In addition, the longer phaseout will mean many more Americans will receive a raise from this proposal.

Second, an expansion should include a new benefit for frontline and essential workers. Essential workers need economic benefits to match the importance of their job. An EITC expansion will make sure that everyone from nurses and health aides to grocery store workers, delivery drivers, and cooks get better compensation during emergencies.

While some businesses are providing temporary pay increases (and more should) the government can help, too. Workers in essential industries should receive an enhanced EITC benefit equivalent to one additional dependent child, with a minimum increase of $1,000. This new permanent feature of the EITC could be toggled on or off nationwide or locally as the current pandemic and any future disaster necessitates. This would lead to an additional raise of up to $3,500 for a single, childless worker and $2,500 (or $3,400 compared to the current-law EITC benefit) for a worker with one child now earning $13 per hour, or the average wage at Safeway.13 And we should further encourage employers to at least match this federal help.

3. New benefit for the long-term unemployed

Third, an expansion should include a new benefit for the long-term unemployed. These are clearly trying economic times; many industries are currently not maintaining the same size workforce as before, and many small businesses across the country will not exist after this recession. Throughout this, we must continue to support unemployed workers. But, because the EITC is a benefit for work, we can use it to provide a springboard back to employment as the economy recovers and to help compensate for lost wages.

Under this expansion, those who are long-term unemployed or on disability and join the workforce would receive an EITC benefit bonus, the equivalent of one additional dependent child, with a minimum increase of $1,000. In practice, this would result in an annual raise of $2,500 for a childless worker, or $2,300 (or $3,100 compared to the current-law EITC benefit) for a worker with one child, working full time at a $15 an hour wage. This would be a bonus benefit that should last at least one full year, but up to four years depending on the state of the economic recovery.

For purposes of this benefit, “long-term unemployed” should be considered any individual who exhausted their traditional, state-based UI benefits more than two weeks ago or those that did not qualify for UI but have been unemployed 26 weeks or more. Further, you could extend this benefit for those who have been on disability insurance policies or assistance and who are interested in returning to work.

Fourth, an expansion should include a new benefit for older workers. Those who lose a job closer to retirement face an uphill battle becoming reemployed at a job with the same compensation, especially if that job is being displaced by changing technology. It’s fundamentally harder for older workers to retrain or uproot their lives to find new opportunities if hardship strikes.

An enhanced EITC can help act as wage insurance if retraining or moving to more opportunity isn’t right for older workers. We proposed a new EITC-55+ that would give workers between the ages of 55 and 67 an EITC benefit the equivalent of one additional dependent child, with a minimum increase of $1,000, a raise of up to $3,500 for a childless worker and $2,900 for a worker with one child. Ninety-six percent of Americans over the age of 55 do not have minor children at home.14

Fifth, an expansion should broaden EITC eligibility. Currently, the EITC is only available for workers between the ages of 25 and 64. And the EITC functions as a refundable tax cut that workers receive one time a year. That makes it tricky for monthly budgeting—most people have bills due every month so a benefit should match those budgeting needs.

The Working Families Tax Relief Act (WFTRA) includes changes that expand eligibility to workers aged 19 to 67. This eligibility expansion would help those just entering the workforce in the worst economy since the great depression as well as those right near retirement. Further, the EITC should be made more like a paycheck with monthly installments. This would better fit family budgeting and people to meet their recurring needs. Finally, we can promote the ability to advance up to $500 of the EITC for a given year to help with emergencies.

The health and economic shock from COVID-19 has been devastating for millions of Americans. With two major economic shocks in the last 12 years and the threats from climate change and future pandemics looming, we need policies that help shockproof the American economy. That will entail a suite of policies—from expanding and modernizing the safety net, to raising the minimum wage, to making it easier for workers to join unions and demand fair pay and benefits. But part of that solution also includes expanding and targeting the EITC—rewarding work and giving families more financial stability and security.

In all, we estimate this may boost working wages by roughly $100 billion a year.15 This proposal could provide substantial increases in income for many Americans and bring families out of poverty.