The COVID-19 crisis is having a dramatically higher impact in areas that the largest proportion of people of color call home.

In counties that are at least 70% people of color, the COVID-19 rate per capita is four times that of disproportionately white counties.

We know that minority communities are predisposed to struggle in the face of the coronavirus pandemic – both in terms of infections, fatalities, and in the resulting economic downturn. Last week, several cities and states released comprehensive data on deaths by race, reflecting the disturbing reality that black Americans are dying of coronavirus disproportionately more than their neighbors. The virus is still spreading rapidly in America, but we can already see racial disparities in cases reported by county.

Our analysis focuses on the most racially homogenous parts of the country in an effort to shed light on how COVID-19 is spreading along existing racial divides. We group counties based on Census’ American Community Survey demographic estimates from 2018 and use COVID-19 caseload data last updated on April 19th, 2020. Black and Hispanic counties were grouped at about twice their national average and heavily Native counties grouped in 100 most Native counties.

Coronavirus incidence is not evenly distributed among the sampled areas, instead concentrating heavily in counties predominantly home to more black Americans, Hispanics, Native Americans, and people of color, in general. 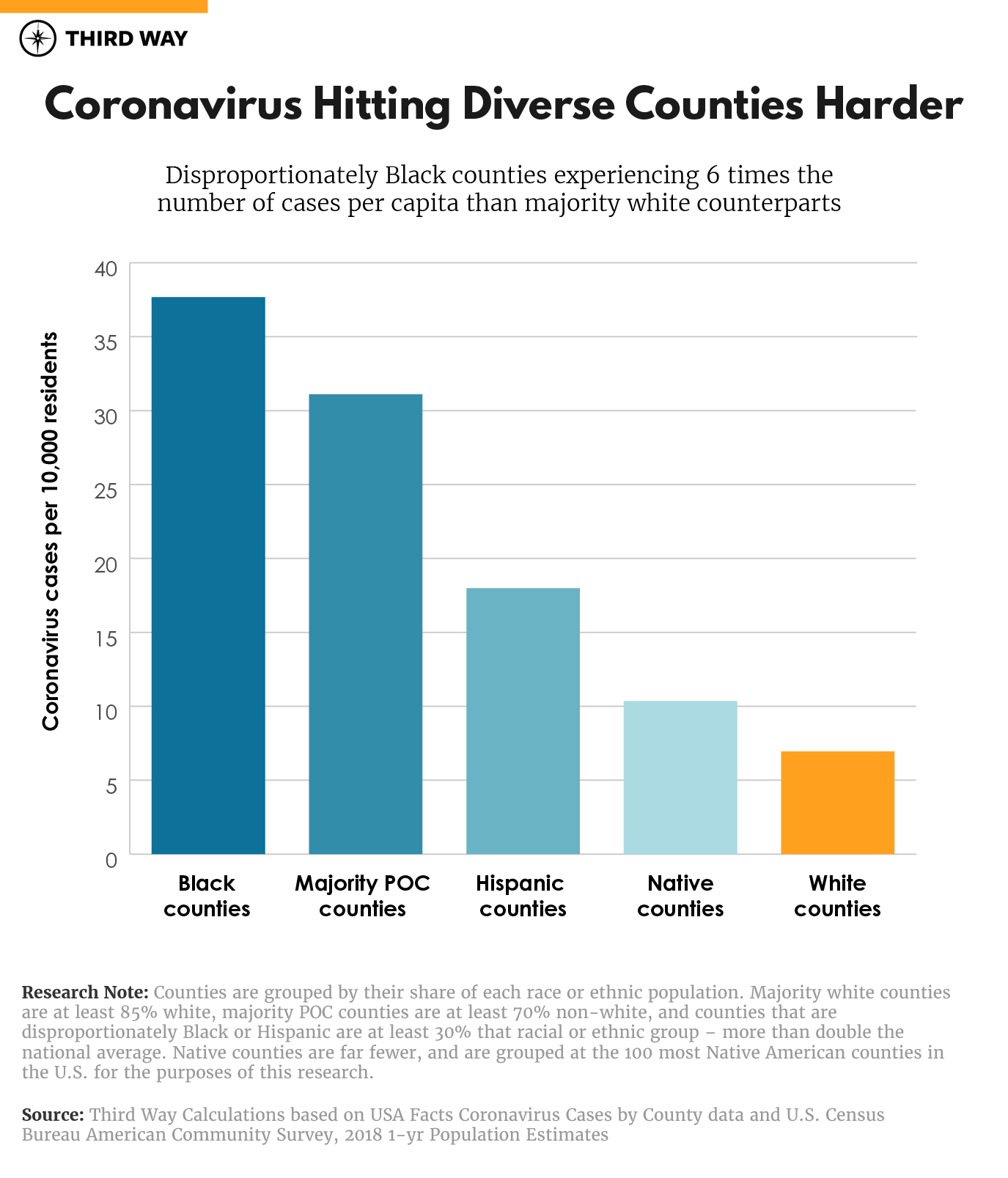 One factor at play is that people of color often live in more urban areas where the virus has spread more rapidly. For example, Queens, Bronx, and King County, New York all report high proportions of Black, Hispanic, and Asian Americans. They’re all also clustered around the epicenter of the U.S. coronavirus outbreak in New York City.

But this doesn’t explain all of the racial disparities playing out in the spread of coronavirus across the country. Even in rural areas, we found higher rates of infection among counties with more people of color, many of whom work in industries where social distancing is difficult, like food service, food processing, and health care. In addition, people of color often have underlying health conditions and higher levels of economic insecurity which can heighten chances of catching the virus.

Michigan illustrates the point well— most of its cases are clustered around cities—but this doesn’t tell the whole story. Outside of Detroit, several suburban and rural counties have significant numbers of reported COVID-19 cases, but the spread appears most pronounced in areas with higher black populations.

Genesee County, north of Detroit, is the suburban home to Flint, Michigan. Its population is 20% black and is reporting over 30 COVID cases per 10,000 residents. North of Genesee sits Saginaw County, which is more rural, 18% black, and is reporting 21 COVID-19 cases per 10,000. Both of these counties noticeably deviate from their whiter neighbors Lapeer, Livingston and St. Joseph Counties— all of which are 85%+ white and have fewer cases, both in raw numbers and per capita.

Coronavirus concentration in urban centers and the racial disparities that accompany it are well documented. But it’s not limited to cities. Outside of the most black city in the U.S., coronavirus continues to manifest in suburban and rural areas that are more black than their neighbors.

The trend continues in Georgia, a state with several urban centers and more than twice the proportion of black Americans than the country at large. The central clusters of COVID-19 per capita don’t appear around Atlanta or its suburbs, and instead appear in the southwestern corner of the state. The most heavily impacted counties are cluster of rural counties, most with fewer than 10,000 residents, that are also majority black. They’re some of the most black counties in the entire country and are suffering the highest COVID-19 outbreak in the state of Georgia.

Farther east, Glascock County, Georgia is home to about 3,000 residents, 87% of them white, and has no reported cases of coronavirus. Immediately north of Glascock, lies Warren County. It’s about double the size of Glascock and reports 19 cases per 10,000 people. It also has over 6 times the black population than Glascock. The trend holds in surrounding counties. Hancock, Georgia, a rural county of 8,000 – 70% of which are black – is reporting 8.4 cases per 10,000. On the other side of the state, Randolph County is 61% black and is reporting a whopping 210 cases per 10,000, despite its status as a small rural home to less than 7,000 residents.

Around the Country More Diverse Counties are Suffering

This dynamic holds across races in different parts of the country, too. Arizona is less white than the country as a whole, but 5 times more Native American and twice as Hispanic. It’s also strikingly rural, with only one decidedly urban center, two suburban areas, and 12 surrounding rural counties.

Coronavirus cases far outside Phoenix are spiking and are primarily concentrated in areas that are also overwhelmingly home to Native American populations. The northeast corner of Arizona is home to large swaths of Tribal lands and reservations, primarily Hopi and Navajo lands1. It’s also home to Arizona’s largest coronavirus outbreaks, despite low population numbers and low density.

Scottsdale, Arizona, sitting in Maricopa County, is far closer to the typical urban center we’d expect to see COVID-19 impacting. The city is 81% white, over 20% higher than the U.S. broadly, and has 7 times fewer coronavirus cases per 10,000 people than Navajo County, its most impacted Native neighbor2.

It’s too soon to tell if more urban and suburban parts of the state will catch up to rural and Native areas in terms of coronavirus cases per capita. But we do know that Native communities tend to be older and poorer, with lower life expectancies and higher levels of respiratory illness and heart disease3. Essentially, they are predisposed to struggle in the face of a highly contagious respiratory epidemic. Preliminary data in Arizona confirms this and reflects a highly racialized divide in how this virus is spreading.

Unfortunately, racial disparities in the spread of coronavirus aren’t limited to rural black counties in Georgia and Tribal lands in Arizona. Our analysis found that high density areas of people of color broadly, and individual racial groups more specifically, had more confirmed coronavirus cases per capita than their white counterparts across the map.

As Congress considers additional aid packages, deliberate attention needs to be paid to combatting this alarming trend and mitigating damage to already vulnerable minority communities. The spread and impact of this devastating disease are not color blind, and Congressional response and federal dollars shouldn’t be either.

Research note: Findings for Asian areas were omitted from publicized research due to low density and concentration in counties across the country. There are more counties with high concentrations of Black, Hispanic, and Native populations, but highly Asian counties are few, peak at 43% (Aleutians East Borough in Alaska), and rapidly drop into single digits outside of Alaska, Hawaii, and San Francisco, CA. For this reason, some of the “most Asian” counties are more Hispanic than Asian, like Queens County, NY. Our findings for predominantly Asian areas appeared to be conflated with findings for predominantly Hispanic or Native areas, and were omitted to avoid confusion and inaccurate results.