A Crisis of Oversight: How Coronavirus Deepened Voters’ Desires for Accountability in Higher Ed

The COVID-19 pandemic has paralyzed our higher education system, forcing millions of students online and creating mass uncertainty as colleges figure out how to safely bring students back onto campus while maintaining their own bottom lines. Congress has already poured more than $14 billion into saving the postsecondary system, with additional rounds of financial relief on the way. With this influx of federal dollars into higher education—and the very real need to keep institutions and students afloat—questions remain about how this unprecedented crisis will shift voters’ perceptions of higher education and whether they want the federal government to beef up or pare down its oversight of our nation’s colleges and universities.

A new national survey of likely 2020 voters finds that in this time of crisis, likely voters across the political spectrum want to see more—not less—oversight from the federal government when it comes to how taxpayer dollars are being spent in higher ed. Because voters are increasingly worried about their own finances and their ability to pay tuition bills, there is broad consensus across the political spectrum that higher education needs additional guardrails and accountability to ensure that bad actors do not profit off the pandemic and that degrees maintain their rigor and value.

The analysis that follows is based on data from an online survey conducted by Global Strategy Group of 1,000 likely voters nationwide for Third Way from June 8-14, 2020.1

Support for Higher Ed Accountability is Strong Across Party Lines.

Over the last two and half years, Third Way has fielded multiple rounds of public opinion research to better understand likely voters’ attitudes surrounding the federal role in holding the higher education system accountable for the outcomes it delivers for students. This research has consistently shown deep bipartisan support for increased federal oversight, as Americans see the need for students and their families to get a return on investment for one of the most expensive purchases they’ll make in their lives.

While voters understand that higher education institutions are not at fault for the pandemic and empathize with the difficult choices they’ve had to make up to this point, this empathy should not be confused with sympathy. With billions of taxpayer dollars and students’ futures on the line, voters feel more strongly than ever that now is the time for the federal government to strengthen its oversight of institutions as they cash bigger taxpayer checks. 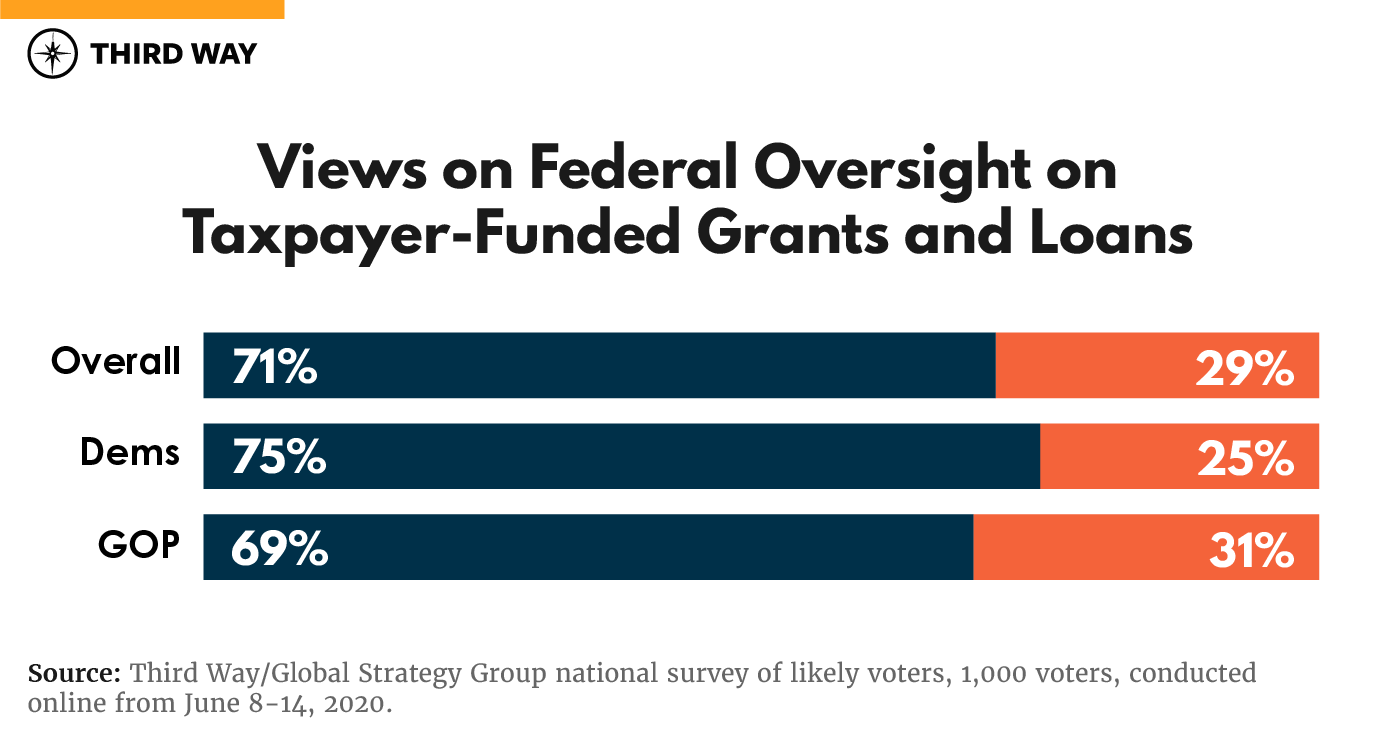 In our deeply polarized country, it is rare to see strong bipartisan consensus around federal action or intervention in any sector. However, these data (along with similar findings from past research) demonstrate that strengthened accountability for federally-funded postsecondary education presents a meaningful opportunity for Congress to satisfy voters on both sides of the aisle. For many Republican voters, this priority is grounded in a desire to ensure taxpayers and students are getting a return on their investment, while Democrats see more federal oversight as a necessary mechanism to protect our most vulnerable students from unscrupulous behavior.

In either case, the current pandemic has only intensified these fears, with voters expressing a renewed urgency to have Congress create more accountability in higher education. Tellingly, getting higher education institutions relief funds quickly falls to the bottom of the list of priorities when ranked in order of importance, with voters instead elevating policies that ensure higher education provides good value to students, protects students from predatory institutions, and strengthens accreditation standards for programs that take federal money (especially understanding more of these will now be online). 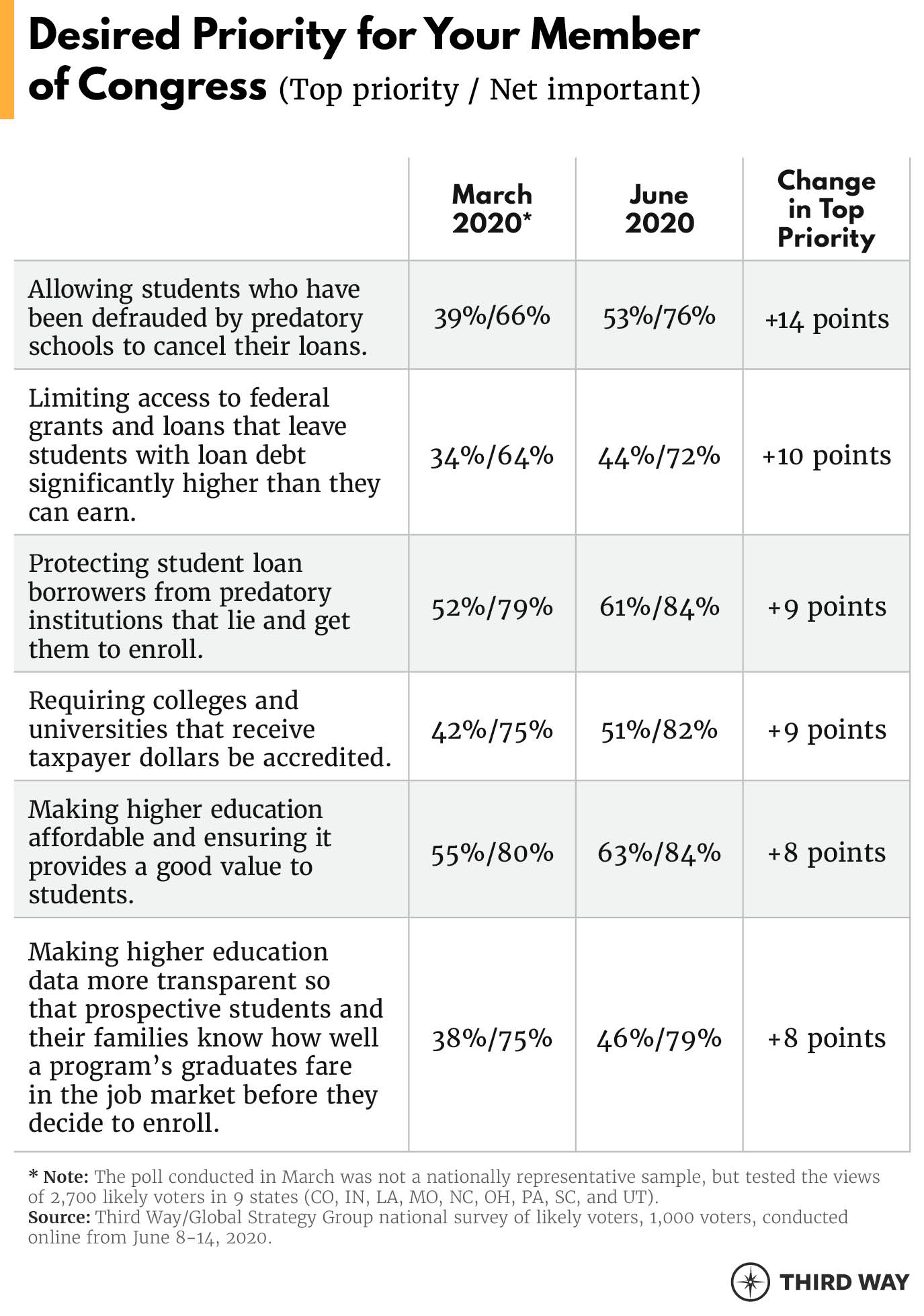 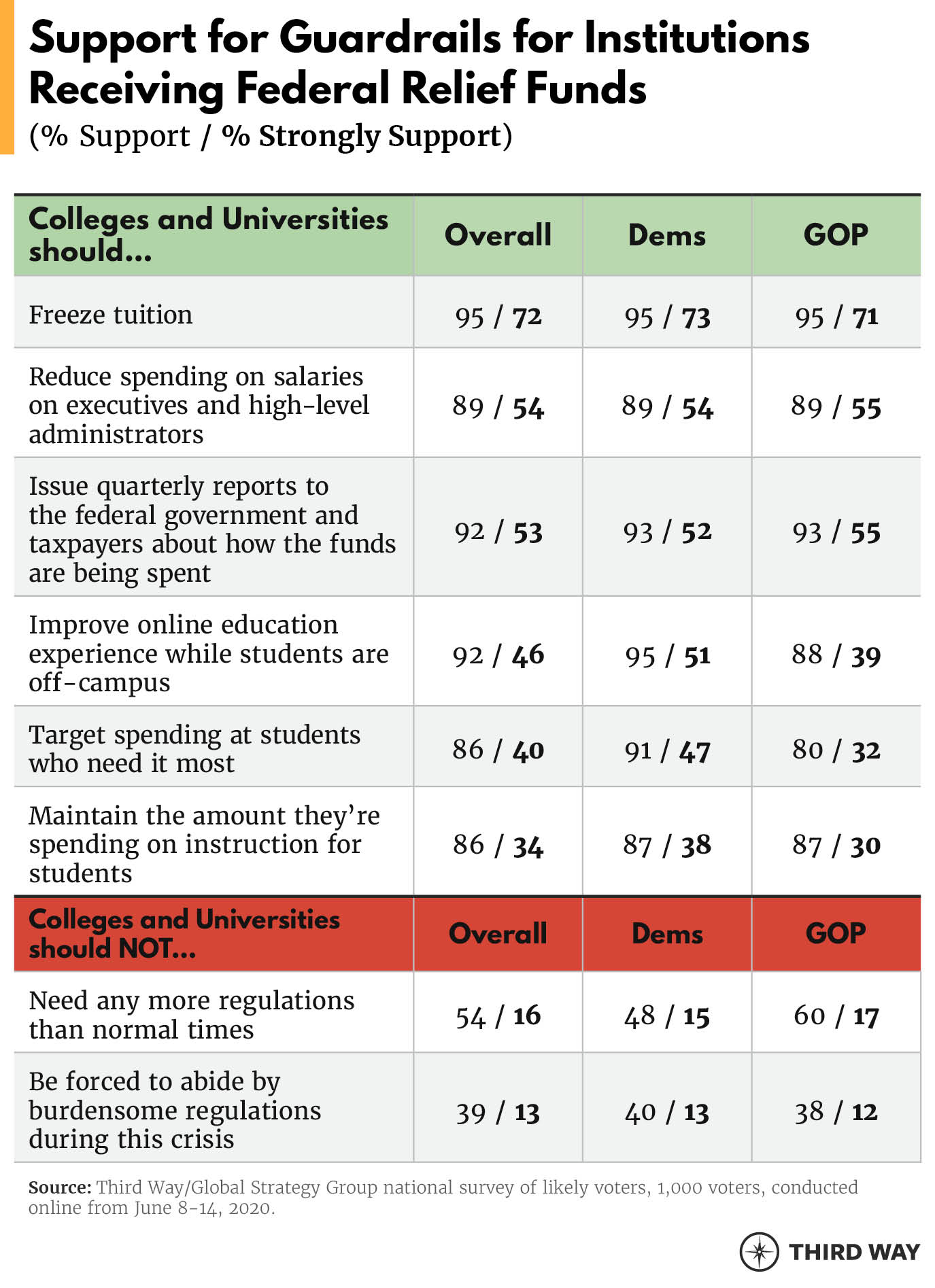 The influx of new federal money and a looming recession could create a perfect recipe for bad actors to take advantage of students and the taxpayer dollars that come along with them. Even before the pandemic began, previous surveys found significant concerns about the lack of federal guardrails and consumer protections in higher education. Not surprisingly, the pandemic has only amplified the concerns voters have that institutions looking to protect their bottom lines will prey upon vulnerable populations if Congress does not shore up its ability to monitor these schools and hold them accountable. This concern runs even deeper as colleges shift a greater proportion of their learning online—which remains a wild, wild west for regulatory action and the ability to monitor quality. 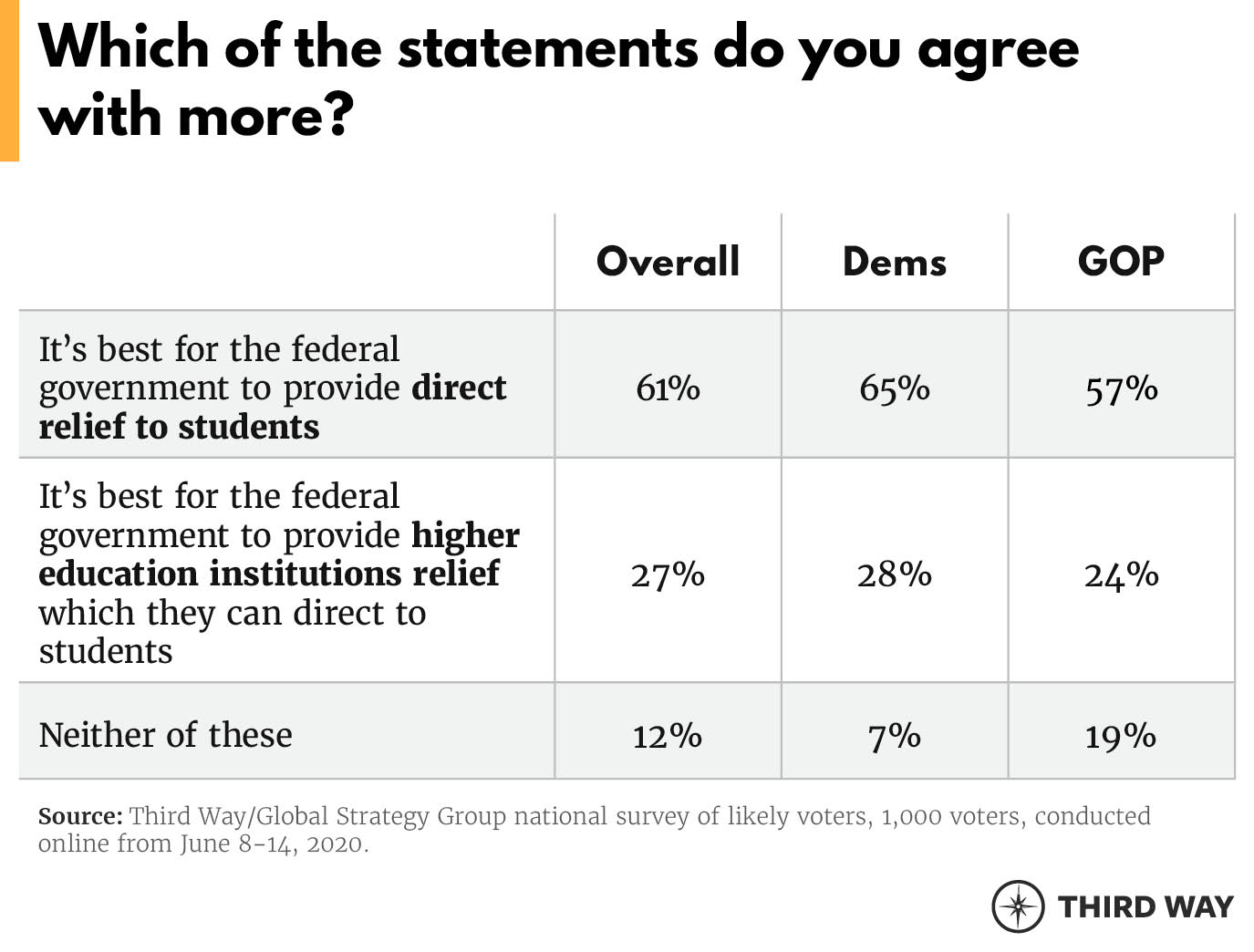 Higher education may not be the most salient issue on most voters’ minds as they head to the polls this coming November, but the virus and the steps policymakers take in an effort to combat its impact will shape the sector for years to come. Political conversations around higher education tend to focus on the need to make college more affordable for students, whether that be making college free on the front end or forgiving student loans on the back end. Yet, the coronavirus has revealed that these topline narratives miss a deep and growing sentiment across the electorate that we should shift our focus toward greater consumer protections and oversight to hold institutions accountable for their outcomes. With billions of dollars pouring into the system and a likely influx of new students seeking higher education in the wake of the pandemic, Congress should heed voters’ warnings that they have a responsibility to protect students’ and taxpayers’ investment in this system and ensure that all students who attend college see a return on that investment as an important pillar in our economic recovery.