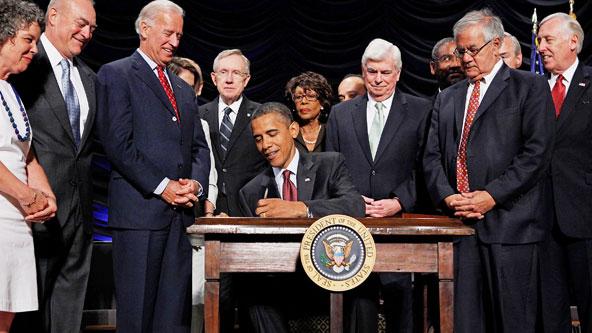 The Wall Street Reform and Consumer Protection Act, also known as Dodd-Frank, ushered in a new era of financial reform intended to eliminate mistakes made by the private sector and lapses of oversight made by the government. Third Way’s Dodd-Frank Resource Center includes all of our publications on this historic law, from legislative summaries to in-depth explainers to interviews with key officials.

The Problems with The Financial CHOICE Act

Senior Policy Advisor Emily Liner testified before the House Financial Services Committee that the Financial CHOICE Act would undo the progress that Dodd-Frank has made to make the financial sector safer.

A Policymakers Guide to the Financial CHOICE Act

This memo summarizes the Dodd-Frank provisions most vulnerable to being abolished by the Financial CHOICE Act and why these regulations are essential to keeping our economy safe from a future crisis.

Setting the Record Straight: How Dodd-Frank is Pro-Growth, Pro-Market, and Pro-Investor

Optimized for use on social media networks, this slide deck summarizes the Dodd-Frank reforms most vulnerable to being replaced, repealed, and endangered in the Financial CHOICE Act.

Dodd-Frank is the single most important piece of legislation that helps prevent taxpayer-funded bailouts. The Financial CHOICE Act would unravel all of the progress we’ve made to make banks stronger and reform the financial sector.

The 2008 financial crisis destroyed 8.7 million American jobs, wiped out $2.8 trillion in retirement savings, and led to the foreclosure of 15 million homes. As President Trump's executive order begins to unravel Dodd-Frank, we give five clear reasons why this vital law must be saved.

Overview of the Dodd-Frank Act

How Trump can grow the economy by $351 billion

If Trump is serious about economic growth, he would do well to support the very law that protects the American people from the damage of another financial crisis. And to do that, all he needs to do is nothing.

How Dodd-Frank Grows the Economy

This infographic breaks down the key costs and benefits of Dodd-Frank’s risk-weighted capital and liquidity requirements. Our analysis shows that the net benefit is a $351 billion GDP increase in 10 years.

Need a quick refresher on Dodd-Frank, but only have a minute? This infographic summarizes the major accomplishments of the law and the final pieces left to complete.

This report describes the 14 most significant reforms put in place by Dodd-Frank and shows how they make the financial infrastructure more resilient.

The Economic Benefit of a Stable Financial System

In this paper, we look at the tale of the tape and assess whether Dodd-Frank’s benefits exceed its costs.

This paper describes what SIFIs are and discusses three contentious issues surrounding them: (1) how rigorous new rules should be, (2) how big is too big, and (3) how non-banks become SIFIs.

This infographic charts the different requirements that banks must meet as they become larger and more systemically important.

This memo breaks down a typical bank’s balance sheet and explains how post-Dodd-Frank capital requirements come into play.

A Liquid Bank is a Solid Bank

What is liquidity? This report defines this frequently used term and describes two new standards of liquidity introduced by Dodd-Frank.

In this memo, we briefly explain how stress tests work and what it means for a bank to get a passing grade.

For even more details on the subtleties of stress tests, check out this report.

What's Going On at the CFPB?

This brief memo describes the goals of the Consumer Financial Protection Bureau and what it’s been doing since it opened its doors in 2011.

Gary Gensler, Chairman of the Commodity Futures Trading Commission (CFTC), joined Third Way last September to provide a behind-the-scenes view into the inner workings of the CFTC as they continue to reform the derivatives markets.

In this slideshow from a Third Way event, Director Richard Berner explains the mission of the Office of Financial Research, a new resource created by Dodd-Frank.

Buckle Up: The Financial Sector Under Trump Could Be Twice as Risky

Donald Trump’s Republican Party platform would make our economy vulnerable to repeating the financial crisis by undoing Dodd-Frank and replacing it with Glass-Steagall. In fact, the financial sector could be twice as risky under a Trump administration that repeals Dodd-Frank.

Dodd-Frank reformed our complex financial system not by closing off markets or criminalizing legitimate economic activities, but by setting up guardrails that encourage healthier behavior.

The Legacy of Dodd-Frank

This Third Way Take asks, how did Dodd-Frank become the Rodney Dangerfield of law? (No respect!)

Getting Frank on Dodd-Frank

Would Glass-Steagall have prevented the financial crisis? Congressman Barney Frank answers this question and more in a conversation with Bloomberg View’s Al Hunt on the fifth anniversary of the day that the Dodd-Frank Act became law.

Your Cheat Sheet for "The Big Short"

To understand Dodd-Frank, one must understand the financial crisis, and The Big Short has gone down as one of the most definitive accounts of what happened.