The Economic Trust Gap: How Democrats Can Re-Center Their Message & Close the Chasm

As national Democrats have proposed and begun to pass a series of popular policy priorities, from the American Rescue Plan to the bipartisan infrastructure package to the health, education, and family investments now moving through reconciliation, Republicans have gone all-in on the culture war. Recognizing that President Biden’s kitchen-table agenda has broad support across the country, Republicans’ strategy for discrediting Democrats and regaining control of Congress now hinges on fearmongering around social and cultural issues like critical race theory, immigration, and crime. Democrats, understandably, have responded by attacking Republicans for having gone off the deep end with strawman arguments about ideas that few Democrats even support.

But frustratingly, recent data indicates that simply portraying Republicans as the party obsessed with social and cultural issues is a losing strategy. A June 2021 poll conducted by Third Way and ALG Research probed the “economic trust gap,” or why voters see Republicans as stronger than Democrats on their ability to handle the economy. Despite the objective fact that Republicans are leading the charge around culture-war issues, voters say their party is focused on economic issues (56%) over social issues (20%). To challenge the perception that Republicans are stronger on the economy, Democrats need to refute Republicans’ culture war attacks, but then forcefully pivot to landing their own platform and message on the economy.

Democrats are seen as the “social issues” party.

While Republicans are wielding niche social issues like the teaching of critical race theory in elementary schools to distract from their unpopular stances on kitchen-table issues, President Biden and Democrats in Congress have pursued an agenda focused on policies with bipartisan support from coast to coast, including Covid-19 relief and infrastructure. Frustrated and exasperated with Republicans’ attacks, Democrats have actually helped to elevate them. Democratic candidates and organizations have tweeted and published press releases making fun of Republicans for their obsession with Dr. Seuss, Mr. Potatohead, and defunding the police, often more so than articulating their own party’s agenda to get the economy back on track.

As Democrats seek to remedy the economic trust gap, they need to start by acknowledging that voters do not perceive Republicans as overly obsessed with these social and cultural issues—even when they are. Once they acknowledge this frustrating reality, they can begin the process of winning back voters’ economic trust by refuting Republicans’ false claims on culture war issues, then swiftly turning the bulk of their energy to making the case for their economic priorities and agenda. To do this, Democrats must take on Republicans for their failed economic ideas, not just their culture war hijinks, and offer their own economic vision that resonates with voters. Democrats simply won’t make up ground on the economy without placing economic issues at the very top of their agenda.

So, what economic issues should Dems talk about?

As Democrats look to keep economic issues front and center on their agenda, they need to both lean into those issues that voters perceive to be Democrats’ strengths and beef up their policies and rhetoric around issues that voters perceive to be Democrats’ weaknesses. Our polling found that voters favor Democrats on kitchen-table economic issues, such as getting people a raise, supporting working parents, and making health care, housing, and education more affordable. 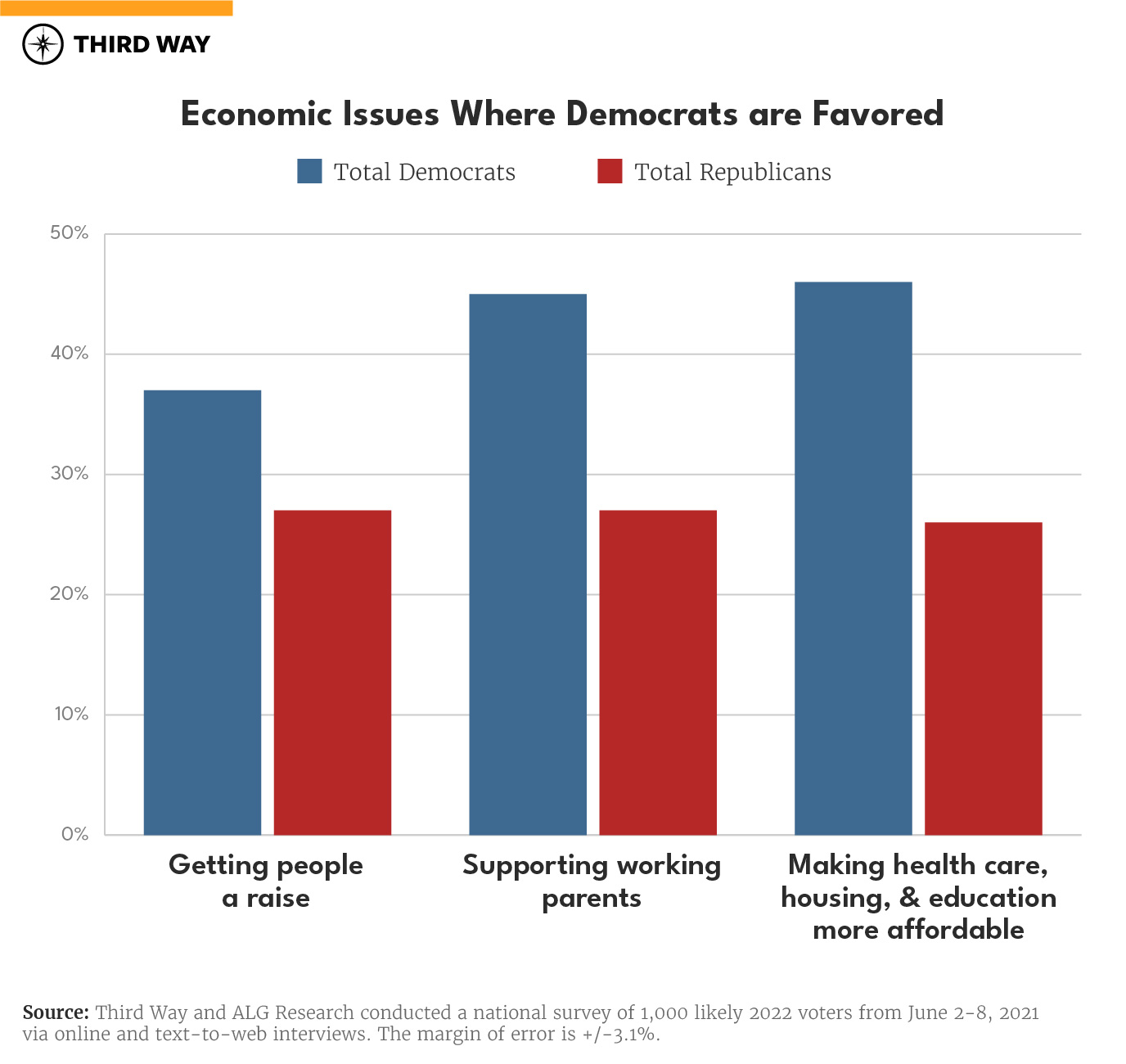 However, Democrats’ perceived strength on these issues does not translate to them being favored on the most fundamental economic issue, “managing the economy,” on which voters favor Republicans by 12 points. And Democrats trail on other key issues related to the health of the overall economy as well, including creating good-paying jobs, creating opportunity, fighting outsourcing, keeping Americans out of debt, and respecting and rewarding hard work. 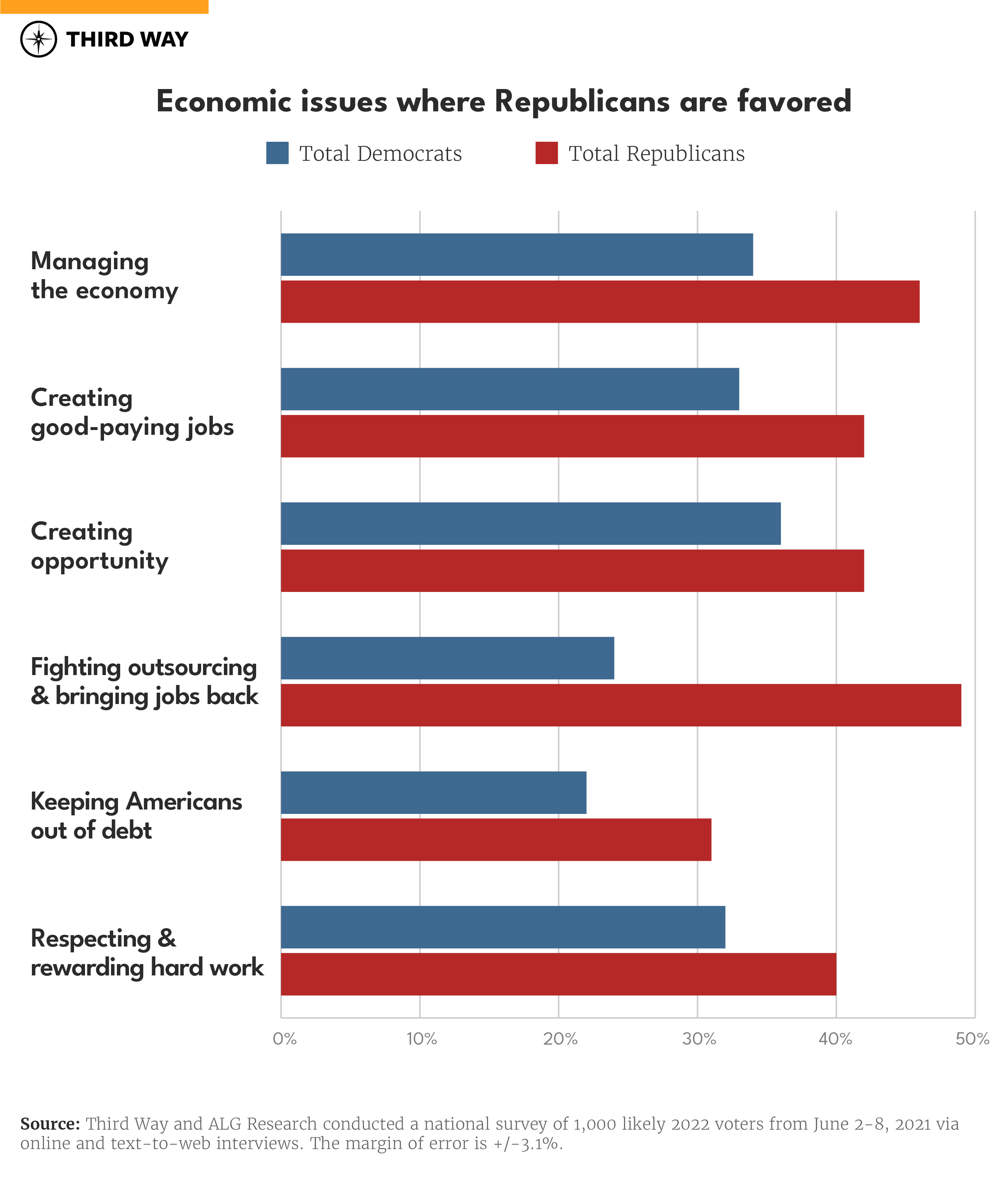 To convince voters that Democrats are fighting not just to care for kitchen table needs but to move our entire economy forward, they need to put creating jobs, rewarding those who work hard, and expanding economic opportunity front and center. Their current strengths on issues like supporting working parents and making services more affordable are important but not sufficient to convince voters that electing Democrats will be best for their pocketbooks. Americans also need to know that Democrats have the ideas and know-how to improve our economy writ large. If voters become convinced that Democrats are the party that rewards hard work and manages the economy best, they will undercut Republicans’ biggest electoral advantage and ensure they can build a winning coalition moving forward.

In 2020, 35% of voters called the economy their top voting issue, even during a global pandemic. In 2022, as Covid-19 has (hopefully) receded, that number will likely be even higher. It is more important than ever, therefore, that Democrats prioritize the economy not only in their policy agenda, but also as they talk to voters about why they should be elected and re-elected. Voters do not currently see Democrats as the party prioritizing their pocketbooks, and across ethnic and racial groups, voters want that to change. To maintain their Congressional majorities, Democrats need to listen.