One of the biggest lessons we learned in 2016 is that in today’s political environment, whoever carries the suburbs will win the presidential election. Hillary Clinton lost the six key battleground states by a combined 455,204 votes, but she lost the suburban counties in those states by 560,412 votes. Democrats turned the tide in the suburbs in 2018, as they recaptured the House by flipping suburban districts across the country. According to Third Way’s analysis of numbers from the data firm Catalist, Democrats are currently estimated to sustain their 2018 advantage in the suburbs in 2020, and if they do, it can help deliver the White House.

The suburbs are not a monolith, however, and some present greater opportunities for Democrats than others this year. Campaigns will naturally focus on big suburban counties that make up a large proportion of a state’s vote share, and where Democrats have recently performed well. But based on this analysis, the largest improvement in Democratic support as a percentage from 2016 to 2020 is expected to take place in smaller suburban counties. Many of these counties have been traditionally Republican, but they are now estimated to be light red or purple this year. And in some key battleground states, Democrats are estimated to increase their raw vote total more in these pockets of small suburban counties than in the state’s vote-rich largest suburban county.

In thirty of these smaller suburban counties (counties that make up 1.5–4% of a state’s vote share) across the swing states, it is estimated that Democrats will improve on their support from 2016 by margins greater than their home state’s overall improvement. For example, Democrats are estimated to improve their support in Pennsylvania by 3.6 percentage points (up to 53.2%) in 2020, but in nine small suburban counties in that state, they are expected to improve their support by at least four points. By contrast, in Montgomery County, Pennsylvania’s largest suburban county, support is expected to stay fixed around 60%. In aggregate, these blue-trending small suburban counties have the potential to help propel Democratic victories.

Third Way classified counties as suburban based on a scheme from the National Center for Health Statistics.

Estimates for Democrats’ 2020 performance come from individual-level predictive models aggregated to county-level estimates. Election results for 2016 come from Dave Leip's Atlas of U.S. Presidential Elections. Estimates are not specific to any one race but are for how Democrats should perform generally. In sum, this data should inform expectations for the November election rather than be interpreted as an exact prediction for it.

All data points are two-way numbers (just Democrat versus Republican, not including third parties).

For a comprehensive methodological description, please see the methodology section in this accompanying analysis. 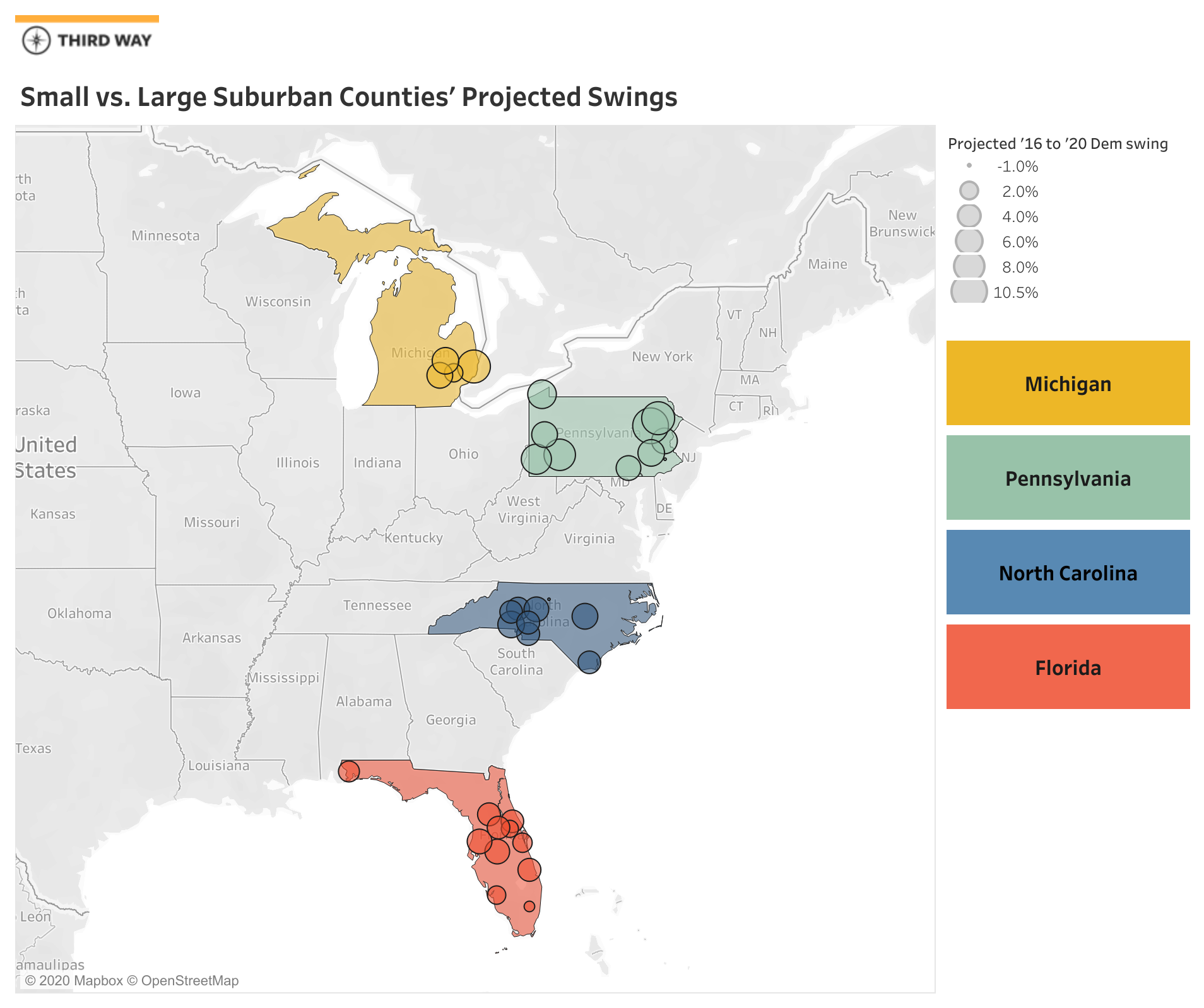 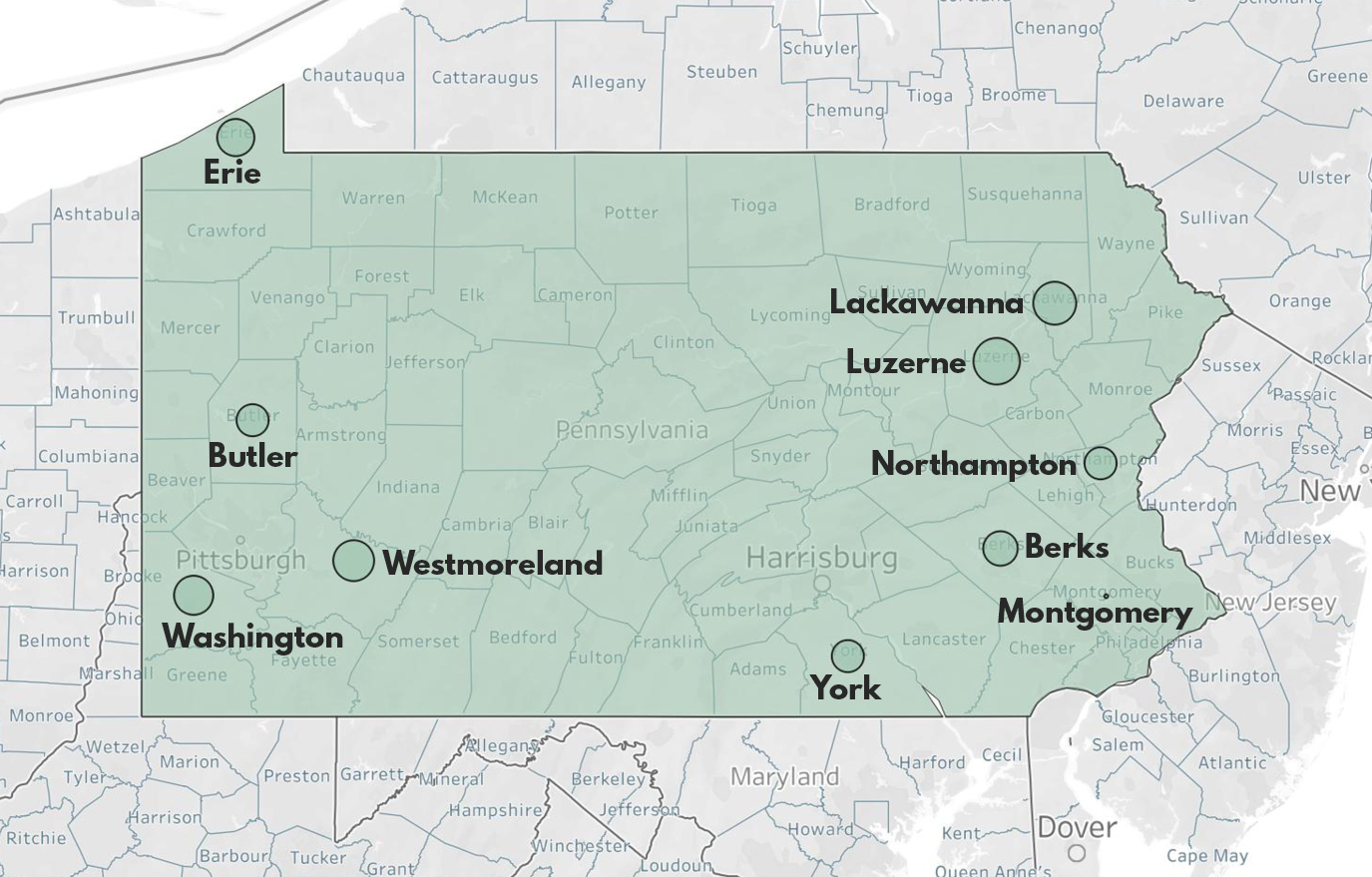 Suburban counties are expected to account for 59% of the vote share in the state this year, and Democratic-leaning Montgomery County outside of Philadelphia should make up around 7% of the state’s vote share, making it the largest suburban county in the state. In 2016, Clinton captured 61% of the county’s vote, and in 2020 it is estimated that Democrats will capture a similar 60%.1In neighboring Bucks County, the second-largest suburban county, Democrats are estimated to improve on their 2016 support by less than one point.

In smaller suburbs in the northeastern and western part of the state, however, prospects for improved support are rosier for Democrats. In Luzerne, a suburban county accounting for 2% of the state’s vote share, Clinton won 40% of the vote in 2016. But Democratic support in 2020 in Luzerne is estimated to exceed 50%. East of Pittsburgh in Westmoreland County, which accounts for just under 3% of the vote, Democrats’ estimated support is 42% of the two-way vote, an improvement from 34% in 2016.

Some counties are becoming more favorable to Democrats due to demographic changes. Luzerne County’s partisan shift may be explained in part due to its growing Latino population; in 2000, Luzerne County was only 1% Latino, while in 2018 it was 13% Latino.

In nine small suburban counties in Pennsylvania, Democratic support is expected to improve more than in Pennsylvania as a whole—and these counties make up 21% of the state’s vote share. In aggregate, improved support in these counties is expected to increase Democrats’ statewide vote total from 2016 to 2020 by 145,511 votes. Meanwhile, it is estimated that Democrats will improve their support by 28,792 votes in Montgomery County. Clinton lost Pennsylvania by just over 44,000 votes, so if these estimations hold, small suburbs could make up this difference, while Montgomery County wouldn’t. 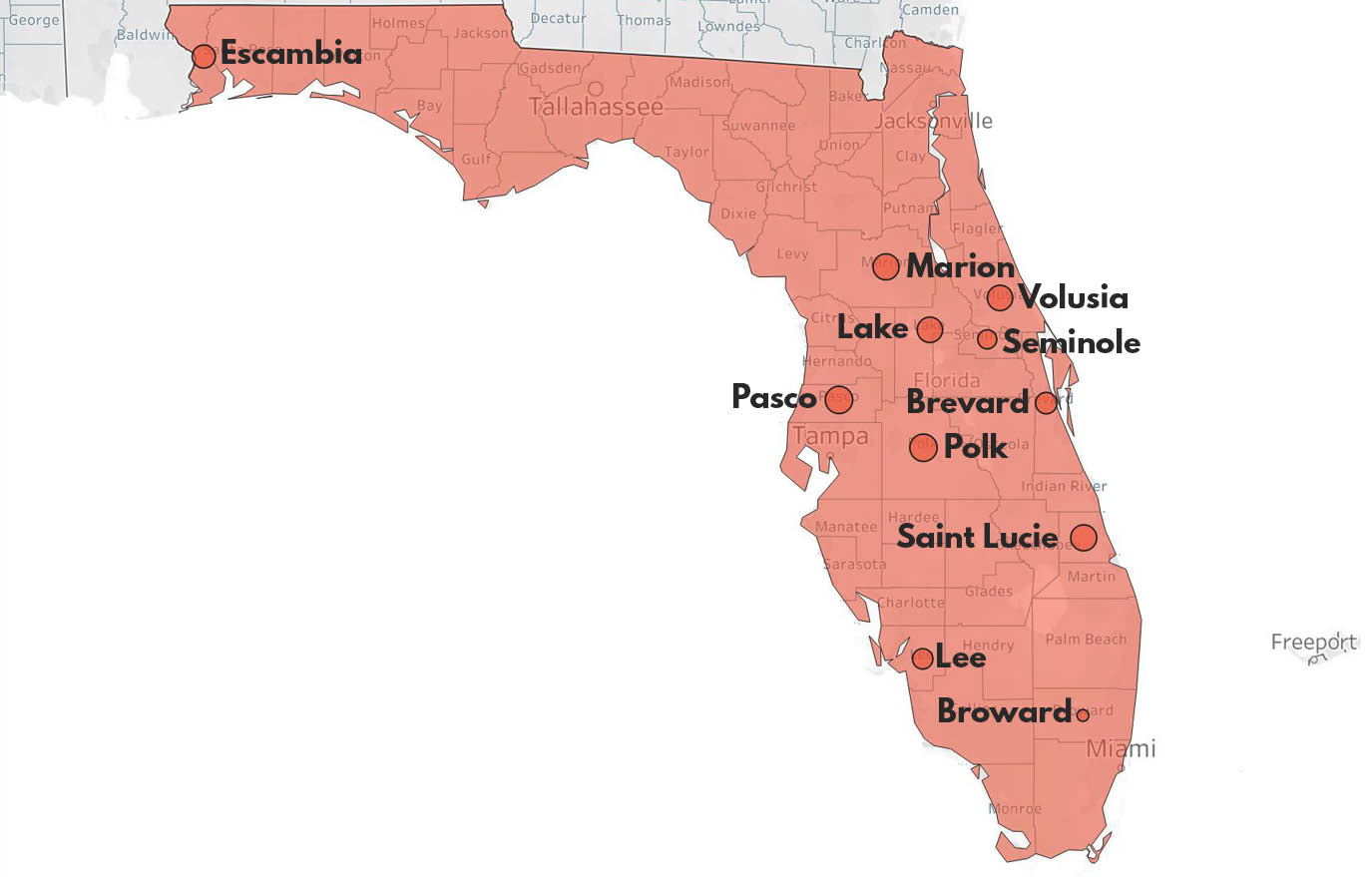 It is estimated that Democrats will improve their margins most in smaller suburban counties along the I-4 Corridor running from Tampa to Daytona Beach. In Polk and Pasco counties, Democrats are expected to improve their support by almost five points, and in Volusia, they are estimated to improve by over three points. All these differences far exceed Florida’s overall estimated improvement for Democrats of 1.3 points.

In these small suburbs, changing demographics may be having a significant effect on expected partisan shifts; both Pasco and Polk counties have become more diverse in the past 20 years due to increasing Latino populations. From 2000 to 2018, Polk County shifted from 9% Latino to 19%, and Pasco County shifted from 6% Latino to 12%.

Ten small suburban counties with large estimated differences in support from 2016 to 2020 are expected to account for 25% of Florida’s vote share, and gains in these counties are estimated to improve Democrats’ vote total by 236,383 votes. 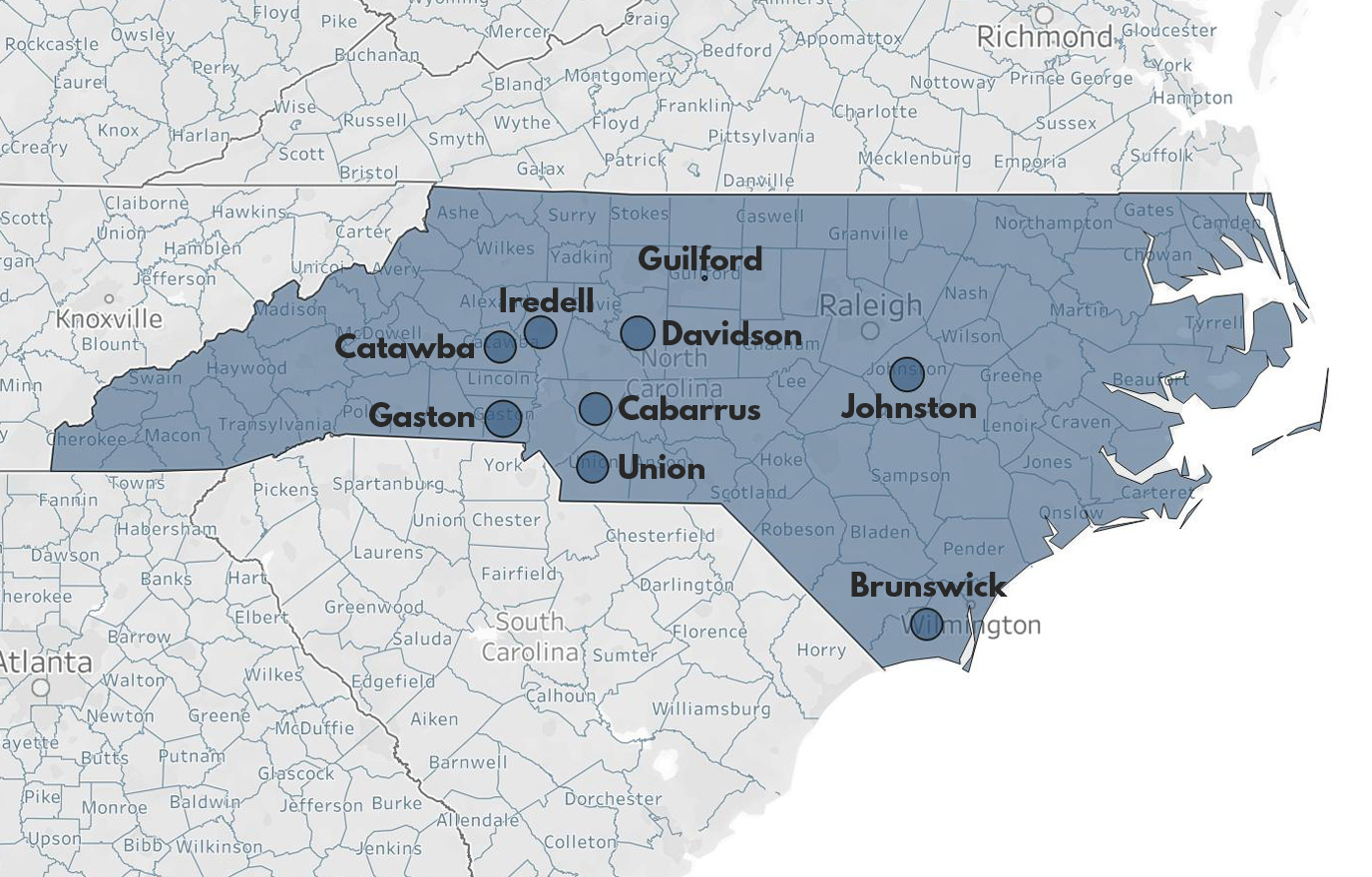 In 2016, Clinton won 48.1% of the vote in North Carolina. This year, Democrats’ estimated support is 49.8%, a 1.7-point improvement.  This expected improvement is driven in large part by movement in the smaller suburbs.

Like in Florida, North Carolina’s small suburban counties have trended more racially and ethnically diverse over the last 20 years, potentially driving some of these partisan differences. Cabarrus County, for example, was 12% African American in 2000, while in 2017 it was 17%. 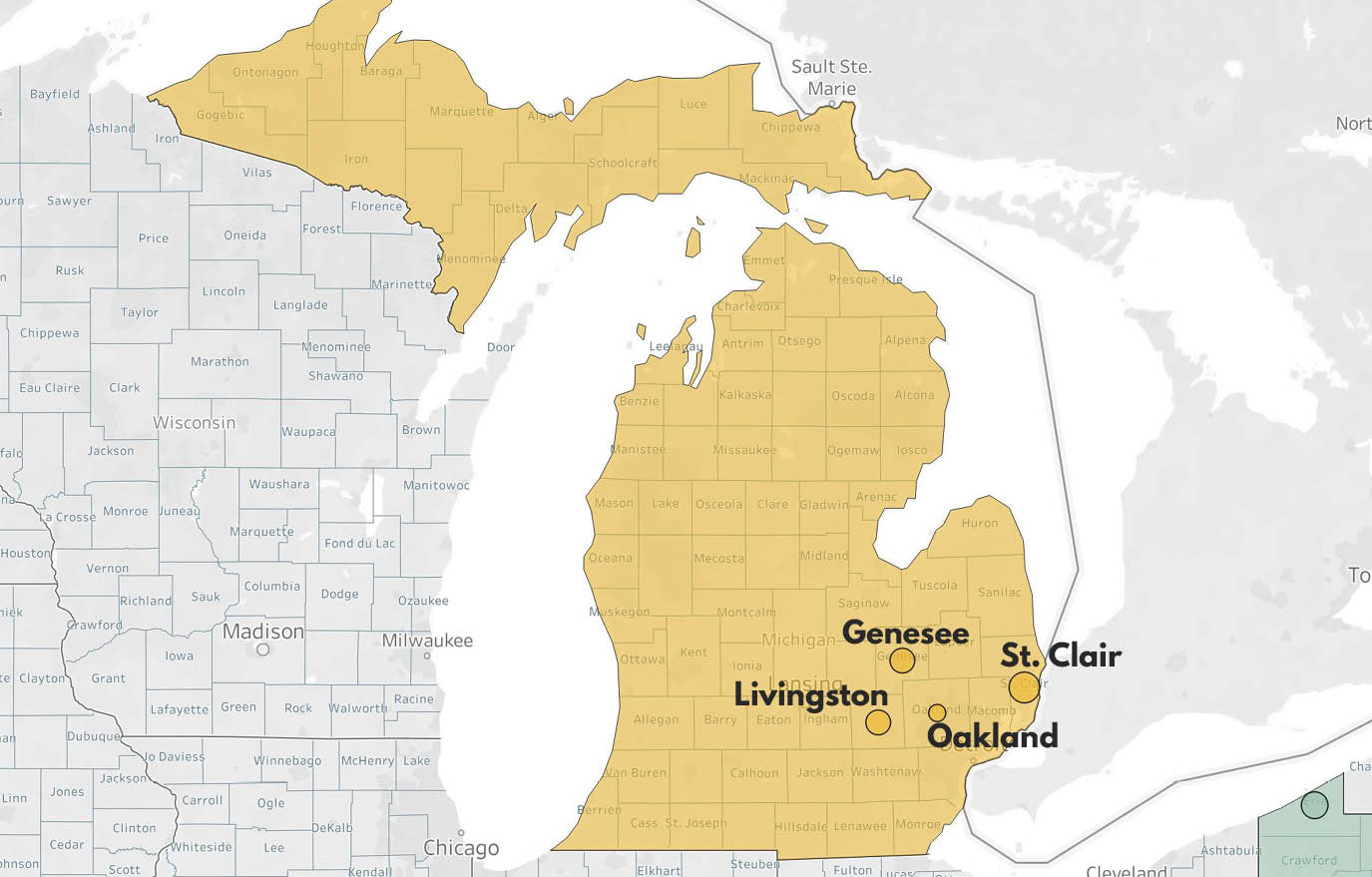 Trends in Michigan are nearly identical to those in Pennsylvania, where Democratic support is estimated at 53.0% of the two-way vote, up from 49.9% in 2016, a 3.1-point improvement.

Suburban counties are expected to make up half of the statewide vote in Michigan in 2020. Michigan’s largest suburban county, Oakland County north of Detroit, makes up 14% of the state’s vote share, and Democratic support there is estimated to improve from 54% in 2016 to 56% in 2020. Because of the size of the county, this small percentage difference makes a big difference in raw votes.

But just like in Pennsylvania, the greatest percentage differences in Michigan are expected to take place in smaller suburban counties, like further outside of Detroit in Saint Clair and Livingston counties. Both comprise 2% of Michigan’s vote, and Democratic support is estimated to improve from 2016 by nine points in Saint Clair and five points in Livingston.

A notable exception to the trend of larger suburbs remaining unchanged from 2016 is Macomb County, which makes up 9% of Michigan’s vote share. Democrats are estimated to improve their support in that county by just under seven points right now, to 51%, which in addition to their improvements in the smaller suburbs, would have a big impact on the vote totals.

The estimated small difference in support in Oakland County would improve Democrats’ statewide vote total by 58,679 votes, a significant sum. But the three smaller suburban counties in Michigan with more significant estimated improvements would add an additional 41,333 to Democrats’ total, potentially giving Democrats a much more comfortable margin of victory.

Exceptions to the Trend: Arizona and Wisconsin

The data used in this analysis does not show the same trends detailed above for Arizona and Wisconsin, but for different reasons.

In Arizona, nearly two-thirds of the vote comes from Maricopa County, which is a large urban county that also includes intra-county suburbs. So, it is necessary to go beyond the county-level analysis used here to comprehensively analyze Arizona’s suburbs by looking within Maricopa County.

In Wisconsin, Democrats are expected to improve on their share of the vote from 2016 the most in rural counties across the state, as well as in tiny suburban counties that each account for less than 1% of the state’s vote share. This exception to the broader battleground state trend could be due to a variety of reasons, including the fact that Wisconsin’s suburbs, unlike suburbs in the other swing states, have not grown more diverse at the same rate. And some suburbs surrounding Milwaukee, like Waukesha County, are longtime Republican strongholds. That does not mean they will not be important in 2020 or that Democrats should not compete in Wisconsin’s suburbs; in fact, Democrats are estimated to make incremental improvements of approximately two points in Kenosha County and Washington County outside of Milwaukee. And because of the razor-thin margin that decided the 2016 election in Wisconsin, these small differences could still swing the results.

Suggesting that Democrats pay more attention to counties like Westmoreland, PA or Saint Clair, MI, where Clinton won under 35% of the vote in 2016, may be a surprising proposal. From a distance, these are Republican counties that Democrats cannot expect to win without a total political realignment. But Democrats’ estimated improved support in these areas tells an important story about shifts that are taking place in the political landscape in 2020. While estimations suggest that Democrats may not gain a larger share of votes in suburbs that are existing strongholds, small suburbs, many of which traditionally favor Republicans, may be trending light pink or purple and have the potential to be decisive. In short, red suburban counties becoming less red can deliver blue victories.

The upshot of this analysis is that Democrats cannot afford to ignore these smaller suburban counties. When talking about the suburban vote, campaigns may naturally be tempted to focus on big suburban hubs. This year, however, the election must also be fought on smaller suburban turf. Helpfully, many of these small suburban counties are in media markets where Democrats are already advertising (e.g. Saint Clair County is in the Detroit media market, while Westmoreland is in the Pittsburgh market). Democrats should not shy away from smaller swing state suburban pockets that have been overlooked in the past if they want to capitalize on the opportunity to beat Donald Trump.

Disclaimer: The views and opinions expressed in this article are those of the authors and do not necessarily reflect the views or opinions of Catalist, LLC ("Catalist").  Although Third Way references its use of Catalist data, any interpretation, analysis, assumptions, conclusions and/or statements, or the like, surrounding or pertaining to the use or citing of this data belong solely and exclusively to Third Way."