On February 9, 2016 the President submitted his fiscal year 2017 budget to Congress. We argue here that this budget is both tough and smart. It strengthens American security by:

While not perfect, the President's budget invests today, so America will be safer tomorrow.

The President’s Budget in Context

Before getting to the specifics of how the President's budget keeps Americans safe, this section explains what the total budget is and how it relates to past military funding.

The President's military budget adheres to the Republican Congress's constraints in the Bipartisan Budget Act of 2015,1 but still provides the U.S. military with a historically very high level of funding. In 2017, the President’s budget would give the military $523.9 billion in base budget funding, and another $58.8 billion for Overseas Contingency Operations (OCO) funding, for a grand total of $582.7 billion. This is $2.4 billion above total defense spending in 2016.

At $523.9 billion this is a larger base budget than any under President George W. Bush and, even when controlling for inflation, $582.7 billion is greater than any military budget passed by Ronald Reagan.2 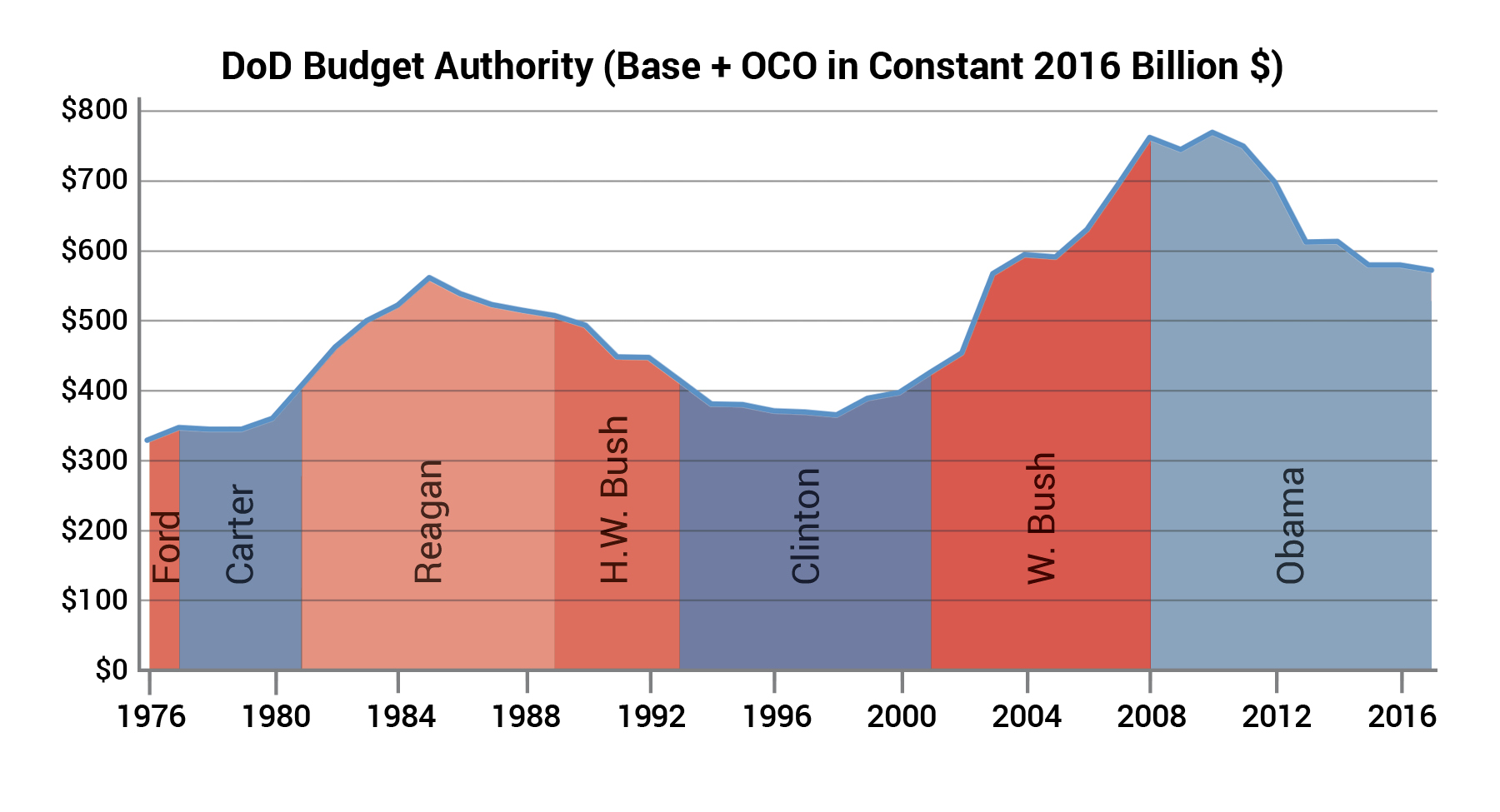 While the military budget rightfully gets the majority of attention in national security discussions, it's important to note that the President's 2017 budget also increases funding for a number of other agencies that work tirelessly to keep Americans safe, including the Departments of:

Dramatically Increased Funding to Defeat ISIS and Other Terrorist Threats

"My highest priority is keeping the American people safe and going after terrorist networks," says President Obama in his Budget Message.3 His budget is a reflection of this promise. By dramatically increasing Department of Defense funding to defeat the Islamic State of Iraq and Syria (ISIS) and increasing funding at other agencies—like the State Department, Homeland Security, and the Federal Bureau of Investigation—that are vital for ensuring we're using every resource at our disposal to defeat terrorists and keep Americans safe. This is a tough and smart approach to defeating terrorists.

50% Increase in Department of Defense Funding to Defeat ISIS

The President's budget provides a total of $11.5 billion to fund the fight against ISIS. $7.5 billion of this goes to the Department of Defense, a 50% increase in funding to defeat ISIS.

A Whole of Government Approach to Defeating Terrorism

While this 50% increase in DoD funding is essential to defeat ISIS, the President's budget makes the smart choice to invest in all the tools at our disposal to destroy ISIS. That includes providing $4.1 billion to the State Department to "stabilize communities liberated from ISIL in Syria and Iraq; disrupt ISIL’s attack-plotting, financing and recruitment; discredit ISIL propaganda; and support a political solution to the Syrian civil war," according to the State Department.5

The Department of Homeland Security also saw funding increases to programs that prevent terrorism and counter violent extremism, including $5.1 billion for aviation security and screening and $7 billion for border security.7

Investing in a High-Tech Offense and Defense

The technological sophistication of our adversaries is increasing rapidly. Russia and China, for example, are both increasing defense spending and seeking asymmetric counters to U.S. military superiority. Thus, it’s essential that our military invest today in weapons best suited to fight the wars of tomorrow, and the President's 2017 defense budget does precisely that by making a number of smart choices, including:

The vulnerability of U.S. government networks to hackers was laid bare last summer when the Office of Personnel Management announced that more than 20 million Americans had their information taken in the largest known hack of a U.S. government network. In response to this growing and pervasive threat, the President's budget includes a sweeping proposal to defend the government's networks. The $19 billion "Cyber-Security National Action Plan" is a comprehensive plan to tackle this problem. Highlights include:

The Cyber Security National Action Plan will also create a "National Cyber Security Alliance" that will "partner with leading technology firms like Google, Facebook, DropBox, and Microsoft to make it easier for millions of users to secure their online accounts, and financial services companies such as MasterCard, Visa, PayPal, and Venmo that are making transactions more secure," according to the President's budget release.10

This budget continues vitally important steps to reduce wasteful spending and reduce the size of the Pentagon bureaucracy to free up resources for the battlefield.

Third Way has repeatedly warned about the consequences of what we call "Star Creep"—the increasingly top-heavy military bureaucracy.11 Thus, we're very pleased to see that this budget takes a number of steps to combat this problem:

The budget also requests a round of Base Realignment and Closure (BRAC) in 2019. Because of representatives' fears of losing jobs and hurting the economy in their Districts, and concerns that previous BRAC rounds haven't yielded substantial savings and didn't have analytic rigor, they are skeptical about DoD's ability to appropriately baseline. At the same time, the DoD Comptroller argued last year that, “The Department is wasting scarce defense resources on maintaining facilities that far exceed DoD’s needs…as the Department draws down to a smaller, more agile force, it must eliminate all areas of waste to include maintaining unneeded facilities.”13

This budget reduces spending on two of the military's most controversial programs—the F-35 and the Littoral Combat Ship (LCS).

In the FY 2017 budget the Air Force made the decision to buy five fewer F-35's than it had planned to this year and 45 fewer in the next five years. As Third Way has noted previously, the F-35 is the fighter aircraft of the future, and there’s not an operational necessity to rush it into production before testing is complete.14 To fulfill its close air support mission, the Air Force decided to defer retirement of the A-10 until 2022. This gives the Air Force ample time to complete testing of the F- 35 prior to its deployment in combat.

Similarly, the Navy's decision to reduce spending on the LCS by $206 million in 2017, and reduce the total number of LCS purchased from 52 to 40, given the troubled history of the program. The LCS has been fraught with problems—including leaking, corrosion, and inadequate offensive and defensive capabilities—since the first ship hit the seas.15 Just last month, the Pentagon's testing director once again questioned the LCS's ability to survive in a hostile combat environment, given its lack of firepower.16

Overall, this budget does an exemplary job of making the investments needed to keep America safe. But no budget is perfect. This budget includes at least two funding decisions that might be detrimental to U.S. national security.

First, this budget continues to increase funding to protect the ground based leg of the nuclear triad—the term for the U.S.'s ability to launch nuclear weapons from the ground, submarines, and aircraft. The idea behind having three legs of the triad is to deter our enemies from launching a nuclear attack on the U.S. out of fear that they couldn't eliminate our entire nuclear arsenal and we'd thus have the ability to launch a devastating counter attack. This counter strike ability, however, is already guaranteed by the air and sea based legs of the triad. In fact, there's compelling evidence that submarines alone could guarantee the U.S. maintains an effective nuclear deterrent.17 Moreover, it's expected to cost approximately $700 billion over the next 25 years to maintain all three legs of the triad. By cutting the ground based leg of the triad the government could save an enormous amount of money that could go towards combating threats like terrorism, which nuclear weapons do little to stop.

Second, the President's 2017 budget abruptly cuts funding for one of the most technologically sophisticated weapons the military has been developing. The Unmanned Carrier Launched Airborne Surveillance and Strike (UCLASS) program had seen funding levels of $818 million in 2015 and 2016, only to be cut to $89 million in 2017 and converted to a "Carrier Based Refueling System." The UCLASS were going to be cheaper to buy and operate than their manned counterparts and capable of covering longer distances given their lighter weight. This is a perfect example of military acquisitions being penny-wise, but pound foolish.

Tough and Smart Choices for a Stronger Future

Despite these missed opportunities, the President's 2017 budget does an exemplary job of providing the resources the Department of Defense and other agencies need to defeat the threats of today and tomorrow. The budget invests in the technology we need to defeat terrorists today, win the wars of tomorrow, and cuts wasteful spending in the back-office to provide for those on the front-lines.

This budget is tough, smart, and will help to create a safer and stronger future for America.