The Iran Agreement is Working, But Congress Has More to Do

With the onset of Implementation Day on January 16, 2016, the first crucial milestone of the Iran nuclear agreement was reached. This agreement continues to keep America and our allies safer because:

Going forward, it will be vital for Congress to continue its due diligence in overseeing the agreement and addressing its weaknesses in the years to come to prevent Iran from ever acquiring a nuclear weapon.

In this report we show how the JCPOA is working and why the progress reached on Implementation Day has proven critics of the deal wrong. Congress, however, can work on improving oversight of the agreement and effectively address its weaknesses. We lay out next steps Congress can take to maintain an independent role in strengthening the agreement, verifying it, and addressing potential Iranian violations.

Overview of the Deal

The nuclear agreement reached last summer committed Iran to scale back its nuclear program and freeze it for decades. In return, the international community promised to lift certain nuclear-related sanctions against Iran—but only once the International Atomic Energy Agency (IAEA) verified that Iran fulfilled its obligations. In January, the IAEA did just that, confirming Iran had fulfilled its commitments under the JCPOA on Implementation Day, allowing the UN, U.S. and EU to lift nuclear-related sanctions on Iran.

With the JCPOA, Iran has restated its commitments under the Nuclear Nonproliferation Treaty (NPT) to not acquire nuclear weapons. Iran is now also required to implement and ratify the Additional Protocol—an IAEA agreement for countries under suspicion of nuclear activity allowing additional IAEA inspections. Lastly, Iran agreed to implement its safeguards agreement with the IAEA, which will add another layer of inspections and transparency over Iran’s nuclear program.1 These agreements combined allow unprecedented access to Iran’s nuclear program by the IAEA beyond the life of the JCPOA.

On Implementation Day, January 16, 2016, the JCPOA passed its first critical test. The IAEA confirmed that Iran:

Converted the Fordow facility to a medical research center:

Implemented the Additional Protocol of the IAEA.

These steps pushed Iran’s breakout time to a nuclear weapon back to one year. Before the Joint Comprehensive Plan of Action, it could have taken Iran as little as two months to potentially acquire a nuclear weapon—and that was with a rigorous sanctions regime against it. In return for these restrictions, the international community lifted various sanctions on Iran while retaining the capability to re-impose them if Iran breaks the deal. 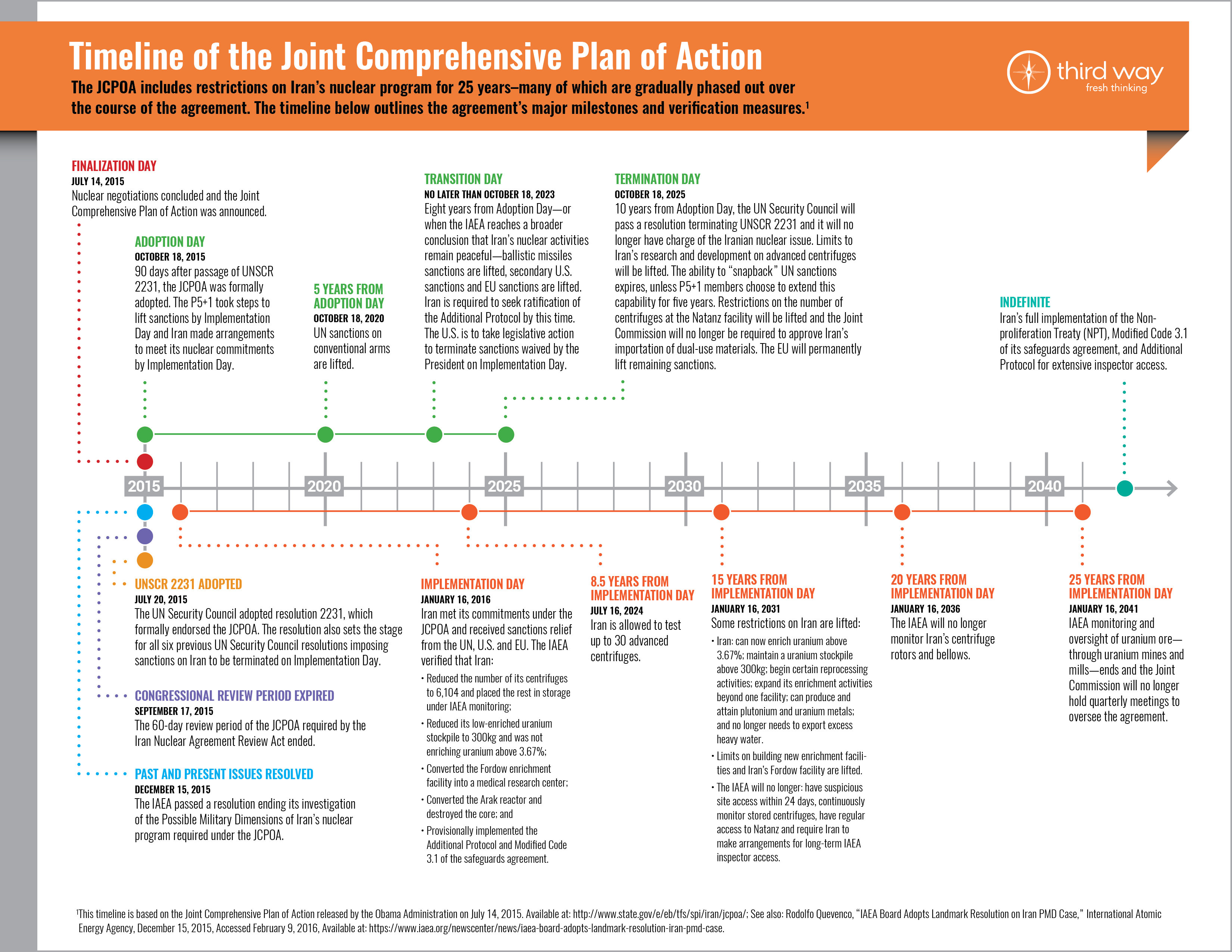 On Implementation Day, the six previous United Nations Security Council Resolutions imposing sanctions on Iran’s nuclear program were terminated.3 The U.S. and EU suspended various sanctions against Iran on Implementation Day, including from the energy, banking, shipping and automotive sectors. In addition, about $100 billion in frozen Iranian assets, made from previous oil sales, was released back to the country.4 Treasury and State Department officials recently testified that more than $50 billion of this is already committed to Iran’s debts and various projects.5 It’s important to note that only the sanctions related to Iran’s nuclear weapons program were lifted. U.S. sanctions against Iran regarding terrorism and human rights will remain in place. Iran had initially wanted UN ballistic missiles sanctions lifted immediately, but the U.S. pushed back. These sanctions, which were originally put in place to curb Iran’s nuclear weapons program, will remain in place for another eight years. Lastly, new sanctions the U.S. placed on Iran in January for its ballistic missile tests will remain in effect.

Despite vast support for the agreement, Republicans were quick to denounce the JCPOA long before the ink was dry. Below are brief rebuttals to the most common and misleading Republican arguments against the JCPOA.

Claim: Iran will use its access to $100 billion in unfrozen assets to finance terrorist proxies.

Response: Most of this money will sit in foreign banks to prevent inflation in Iran.6 Iran owes more than $50 billion of this to debt payments and infrastructure projects. Further, Iran is still listed as a state sponsor of terrorism and will continue to be under extensive terrorism sanctions from the U.S.

Claim: Iran will be allowed to inspect itself, rather than being inspected by the IAEA.

Response: This is false. The JCPOA explicitly states in Annex I that the IAEA will be provided access to monitor facilities for several years. IAEA staff in Iran will be increased to 130-150 members.7 IAEA Director General Yukiya Amano has also dismissed this claim, reassuring the public that IAEA inspections in Iran are consistent with long-established IAEA safeguard practices.8

Claim: Prime Minister Netanyahu criticized the agreement’s dispute resolution mechanism, claiming Iran would be able to hide any nuclear activity before inspectors get in.

Response: The P5+1 can vote to ensure IAEA access to suspicious sites within 24 days at the most. Experts, including Secretary of Energy Ernest Moniz, say this time frame is not sufficient to hide any nuclear activity.9 The half-life of uranium is millions of years, and would leave traces well beyond 24 days. Much like leaving DNA at a crime scene, it would be impossible for Iran to hide its nuclear activities. Investigators would easily be able to detect traces of nuclear activity through environmental samples.

Response: The Obama Administration has imposed sanctions on Iran for these tests. To ensure the safe return of American hostages, including Washington Post journalist Jason Rezaian and former U.S. Marine Amir Hekmati, the Administration delayed imposing sanctions. The day after these Americans were safely out of Iran, the Administration imposed severe sanctions for Iran’s illegal tests.10

Claim: The agreement creates an emboldened Iran which endangers our allies.

Response: Our Arab allies have come out in support for the agreement and the U.S. has provided additional assistance to guarantee their security. A coalition of Iran’s Arab neighbors, including Saudi Arabia, expressed confidence that “all the efforts that have been exerted make this region very secure, very stable.”11 Following Implementation Day, the Israel Defense Forces’ Chief of the General Staff, Lieutenant General Gadi Eisenkot, acknowledged that the JCPOA has eliminated the greatest threat to Israel.12

While the Iran deal has plenty of critics, it has a growing list of supporters who have highlighted the success of Implementation Day (see Appendix). Because of the JCPOA and the arrival of Implementation Day, Iran’s breakout time to a nuclear weapon has been pushed back to one year from two months. Should Iran attempt to break the agreement, the U.S. and the international community will have the time and ability to respond.

What Happens if Iran Cheats?

The JCPOA includes mechanisms to quickly reinstate sanctions if Iran violates the agreement. Under the JCPOA, the six UNSC resolutions terminated on Implementation Day can be re-imposed if Iran doesn’t comply with the agreement. A member of the P5+1 need only alert the UN Security Council of a violation by Iran and these UN sanctions will be re-imposed if the issue is not resolved within 30 days. This is more than enough time for the IAEA to discover radioactive traces in Iranian nuclear facilities. The P5+1 members can use this snapback mechanism for 10 years of the JCPOA and have the option to extend it another five years if they feel Iran may be in noncompliance with the JCPOA at the 10-year mark.

The U.S. and EU will also be able to snapback sanctions if Iran violates the agreement. If Iran cheats, the United States could reinstate sanctions “in a matter of days.”13 These would include sanctions against Iran’s oil and financial sectors, as well as the possibility of new sanctions.

Next Steps for Congress

The JCPOA isn’t perfect, but it is the best path forward to prevent a nuclear-armed Iran and maintain transparency over its nuclear program for decades. Implementation Day proved the merits of the JCPOA in restricting Iran’s nuclear ambitions. More can be done going forward, however, and there are a variety of ways for Congress to maintain rigorous oversight of the JCPOA and strengthen it.

The nuclear agreement with Iran is working. It has effectively scaled back Iran’s nuclear program and put in place a stringent monitoring and verification program for decades to come. On Implementation Day, the agreement passed its first crucial test. Although it’s not perfect, the JCPOA has eliminated the threat of a nuclear-armed Iran and secured our regional allies—all while maintaining our capabilities to respond to any attempt by Iran to cheat. Going forward, Congress must maintain a proactive role overseeing the agreement and holding Iran accountable.

Below is a list of organizations and experts who have highlighted the success of Implementation Day.