Getting it Right: The Next Fifteen Years of Energy

The EPA’s Clean Power Plan represents a vital step toward a clean energy future, and promises significant emissions reductions over the next fifteen years. Even in the face of legal uncertainty, many states intend to move forward with their implementation plans. These states will be faced with a choice of two compliance approaches: a rate-based option or a mass-based option. Through our analysis, we’ve found that of these two options, a mass-based approach offers an enhanced ability to:

Despite legal uncertainty, states are still paying close attention to the Clean Power Plan (CPP). The recent Supreme Court stay lengthens the timeline for implementation, but there is a very good chance that the rule with be upheld in the U.S. Court of Appeals. This gives states more time to make their implementation plans as effective as possible in order to achieve nationwide CO2 reduction goals of 32 percent by 2030. Right now, 20 states are moving forward with the development of their implementation plans, which means they will have to make some key decisions.

The CPP offers two basic approaches for implementation: a rate-based approach, which sets a maximum amount of CO2 per megawatt hour (MWh) that a fossil fuel plant can emit, and a mass-based approach, which sets a maximum number of tons of CO2 that may be emitted from fossil fuel power plants in a state.1 Once a state chooses one of the options, it cannot switch to the other, which means that this is a key decision to get right. Through our analysis, we’ve identified the mass-based approach as the clear winner when it comes to getting the highest level of emissions reductions possible while also allowing flexibility in energy technologies and policies.

What’s the Difference Between the Two Approaches?

The mass-based approach expresses its target in terms of total tons of CO2 emitted. Under this approach, CO2 emissions from power plants are capped based on a state’s unique power mix and historic generation.2 The state then decides how to allocate this cap to cover emissions from its fossil power plants.3 Take Illinois for example, which has a mass-based goal of 66.5 million tons of CO2 in 2030 if it elects not to cover post-2014 power plants.4 To maintain compliance, units in Illinois must hold sufficient allowances—or permits to emit—to make sure that the total emissions across all fossil-fuel plants stays at or below this target.5 Thus, any low-carbon resource that keeps Illinois under the cap is implicitly counted towards compliance.

Meanwhile, in a rate-based system, state targets are expressed as the amount of CO2 produced per MWh of generation. For Illinois, the rate-based target is 1,245 lbs. of CO2/MWh.6 For Illinois to reach compliance, it must either make sure that every utility portfolio or power plant is at or below the prescribed target, or it can prescribe different rates to different utility portfolios or types of plants so long as it meets the overall goal on average.7 Once a rate is prescribed, it is up to the utilities to figure out how to get to that rate. Unlike under a mass-based plan, only certain supply or demand side emissions reductions are incentivized. This means that a state will have to design and implement a crediting mechanism for emissions reductions that fall outside the fence line of power plants, such as energy efficiency or renewable energy projects.8 Due to the need for crediting, compliance with the rate-based target is calculated using the following formula:

The Benefits of a Mass-Based Approach

Even though both methods impose a cost on carbon from power plants, the mass-based approach has a number of advantages: it is more flexible in the variety of low-carbon activities it can incentivize, its simplicity makes it easier for states to calculate compliance and participate in interstate trading, it provides a way for states to drop-in existing states policies for compliance, and it does more to guarantee net emissions reductions. Thus, the mass-based approach allows states to pursue a larger range of options much more simply and to greater effect.

Under a rate-based approach, the state’s ability to expand or direct support is limited. However, the mass-based approach provides a means for states to support a wider range of low-carbon activities through its allowance allocation method.9 The potential allocation options, which may be combined, are outlined below:

For states that want to prioritize particular zero carbon or carbon negative activities, such as existing nuclear or waste-to-energy generation, they can do so through allocation. A state that chooses a rate-based option will not have an opportunity to raise and direct funds to technologies or practices that have strategic priority. This means that if a state values an at-risk nuclear plant, it would be able incentivize its continued operation and/or re-licensing through an allocation. Below, we have highlighted some key low-carbon activities that a state can choose to support using a mass-based approach, but which are overlooked in a rate-based approach. We also explain why a state might want to support them. 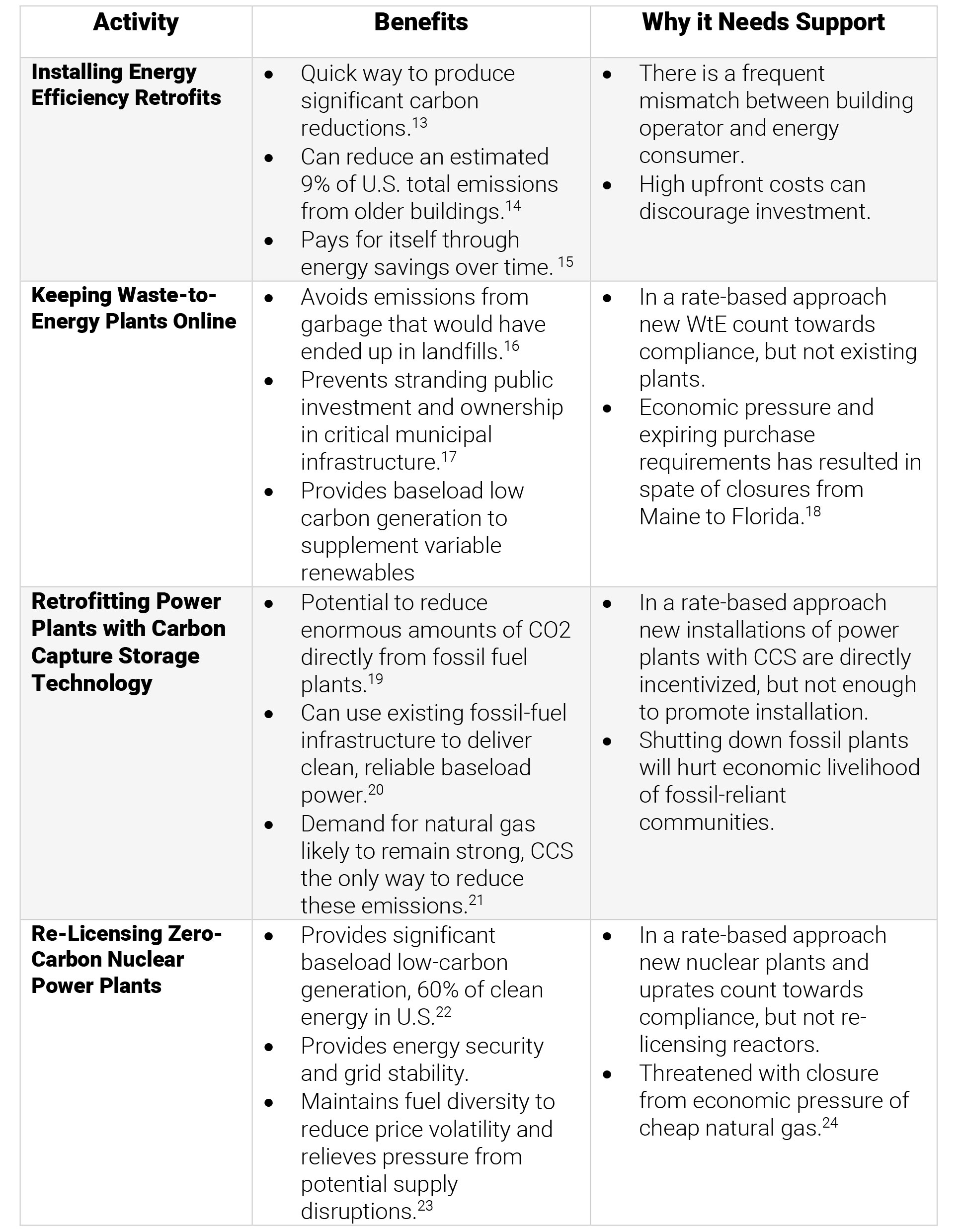 It is also evident that a mass-based approach is the simpler method for states to carry out. As long as power plants hold sufficient allowances to match their CO2 emissions, the state goal is achieved. Meanwhile, determining compliance under the rate-based approach requires a complex formula and involves the administrative hurdle of establishing, operating, and auditing a crediting mechanism. Because of this complexity and the potential for fraud, there is worry that credits and the crediting process under the rate-based approach can be legally challenged, which could slow implementation.25

Furthermore, if a state wants to set up or join an emissions trading scheme, the mass-based system makes this process easier. For example, in order to trade credits under a rate-based approach states would first have to average their rates together to arrive at a single rate for all connected states, meaning that some states would have to adopt a more stringent rate.26 Meanwhile, under a mass-based approach, targets do not have to be averaged—a ton of CO2 is a ton of CO2 no matter what.27 In fact, many states are already leaning towards the mass-based approach because of its intrinsic simplicity.28 This momentum is significant because states can only trade credits or allowances with other states that choose the same compliance approach (i.e. mass with mass and rate with the same type of rate). It makes economic sense for states to choose a common approach to allow credits to be traded on a regional basis. For instance, the Southwest Power Pool (SPP), PJM Interconnection and the Midwest Intercontinental System Operator (MISO) have all released analyses showing consumers will save billions of dollars if states work together.29 SPP estimated an approximate 40% savings using a regional approach, lowering costs from $3.3 billion per year to less than $2.4 billion.30 Similarly, MISO found savings of about $3 billion annually.31

There are already models in operation to help states figure out how to implement a mass-based allowance trading system. A recently-published Acadia Center study points to the Regional Greenhouse Gas Initiative (RGGI) from the Northeast and mid-Atlantic regions as a blueprint for mass-based CPP compliance.32 Taken together, it makes sense for states to adopt a mass-based approach, not only due to administrative ease, but from a cost perspective as well.

Under a rate-based plan, many states would have to go through the difficulty of translating the effect of their energy policies into a rate-based target if they wanted to calculate its effect on compliance. For instance, if Indiana wants to use its clean energy portfolio standard to support compliance with the CPP (which allows nuclear energy to contribute up to 30% to Indiana’s clean energy goal) the easiest way to do that would be through a mass-based approach.34 This could help ease administrative burden and allow states to continue policies that are already working for them.

While both compliance approaches could feasibly get states to the emissions reductions needed, a mass-based system is the only one that ensures this outcome. The problem with the rate-based approach is that the structure of its compliance mechanism can cause states to increase their overall carbon emissions even when emission rate targets are met in terms of CO2 per MWh.35 This undesirable outcome could come to pass under a rate-based plan because some actions that increase emissions are not counted towards the emissions rate.36 Analyst Jesse Jenkins expounds upon this issue at length, explaining how shutting down nuclear reactors and replacing them with gas would drive up emissions while paradoxically not undermining targets under a rate-based plan.37 This loophole exists because the rate-based compliance formula does not account for total emissions, just the rate at which emissions are produced from just a small subset of the all power generating units.

Consequently, under a rate-based approach, it would be possible to shut down an economically stressed nuclear power plant and replace its generation with existing natural gas. Therefore, in terms of nuclear closures, it’s perfectly possible that emissions will go up, not down, under the rate-based approach. This makes no sense for a regulation that’s sole purpose is to reduce greenhouse gas emissions. Only through a mass-based approach that covers all fossil units can states ensure that this loophole is avoided, so that existing clean energy generation is fully accounted for in compliance.

Under the mass-based system, CPP targets can be met in the way that promotes each state’s particular economic and environmental interests. To be clear, these benefits don’t come about simply by choosing a mass-based approach. States must intentionally allocate to a wider variety of carbon reducing activities, like efficiency retro-fitting or nuclear re-licensing, if they see these options as the best way to ensure environmental integrity, maintain jobs, and ensure energy security.38 The rate-based approach has less flexibility, fewer options to achieve reductions, more administrative challenges, and is more likely to allow an increase in total emissions. If the Clean Power Plan represents the next 15 years of energy, it is imperative that states choose wisely when developing their plans. And for states that want to have more control over their energy mix and a simpler administrative process, while also ensuring that emissions actually come down, the mass-based approach is the right choice.