Why Free College Could Increase Inequality

As the 2020 primary debate heats up, some activists and influencers are pushing Democratic candidates to embrace “free college,” saying it is the progressive policy to address inequality in higher education. But what if the opposite is actually true? In practice, free college programs are often regressive and can do more to exacerbate inequality than solve it. While the design of the particular program matters, free college initiatives nearly always fail to address the needs of low-income students and shift resources to the upper middle class. These are certainly not the intended outcomes of the policymakers who propose them—but as the saying goes, if something sounds too good to be true, it probably is.

We cannot afford to ignore the pervasive equity gaps that exist across our higher education system. Today, children from families in the top 1% are 77 times more likely to attend an elite college compared to the children from low-income families.1 Fewer than 15% of low-income students get a four-year degree, while more than 6 in 10 wealthy students do.2 Policymakers should absolutely be engaged in a serious debate about how to counter these persistent trends. Unfortunately, free college isn’t the answer.

Contrary to their reputation as “progressive,” free college programs overwhelmingly allocate taxpayer dollars toward upper- and upper-middle-class students, giving them a further head start than they already have in the higher education system. The worst offenders are “last dollar” programs (see Appendix for details on types of free college programs), which pay for the tuition balance that remains after all other grants have been applied. Ultimately, that means picking up a bigger check for students who don’t qualify for need-based aid, like a federal Pell Grant. For example, if two students attend college—one a low-income student receiving a Pell Grant and the other a wealthy student not receiving any other financial aid—tax dollars from the free college plan would flow to the wealthy student (who is already more likely to go to college in the first place and be able to afford it) because they will have greater tuition expenses not already covered by existing aid.

Tuition and fees at the University of Florida total up to $6,380 a year.3 That means for the lowest income students, who receive a maximum Pell Grant ($6,095 this academic year), their tuition is almost 100% paid by the federal government’s existing need-based aid program.4 So a last dollar free college plan would end up paying the tuition of the wealthy students who could otherwise afford to attend, while barely doing a thing to help the low-income students who actually need assistance. 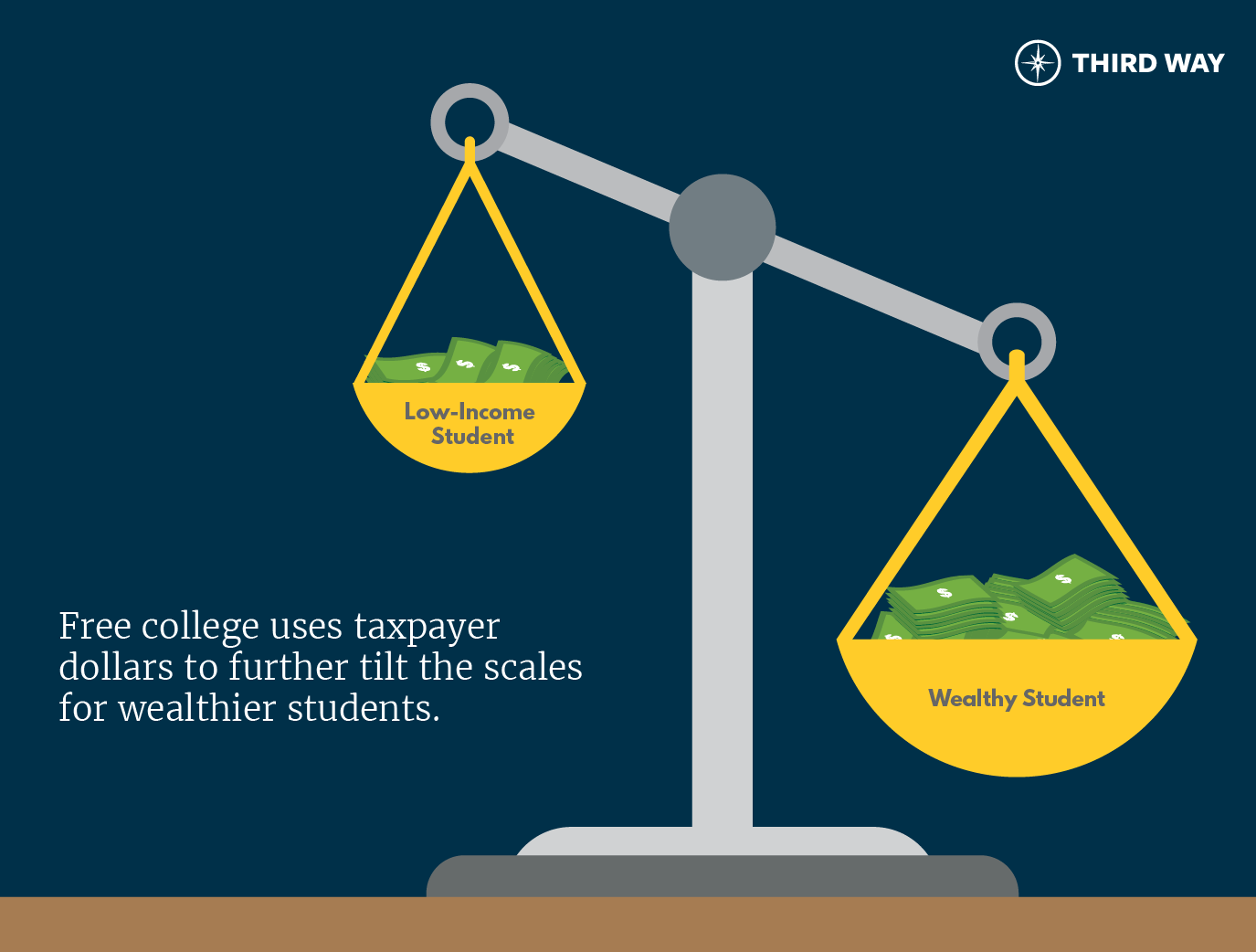 This becomes a big problem when you add up all the money being spent on these programs. One analysis of a federal free college proposal found that families from the top half of the income distribution would receive 24% more in dollar value from eliminating tuition than students from the lower half of the income distribution.5 While targeted programs like the Pell Grant were meant to increase access and make college more affordable for low-income students, free college programs would overwhelming direct tax dollars to subsidize the college tuition of those whose income is too high to make them eligible for need-based aid—proving that what sounds like equality does not always provide true equity.

With the rhetoric surrounding rising tuition costs, an easy fix sounds like eliminating tuition altogether. Surely that would solve the problem, right? Wrong. That’s because tuition isn’t the only driver of college affordability. For this school year alone, tuition and fees make up only 48% of the total costs a student pays to attend a four-year public institution.6 One recent study in California showed that while the state has done a good job at keeping tuition affordable through financial aid, low-income students were still struggling with paying the costs of living like housing, food, textbooks, and transportation.7 That’s why it is estimated that simply eliminating tuition expenses would still leave low-income students with $17.8 billion in unmet need for living expenses—the real cost of college for the majority of students.8

Before the introduction of the Tennessee Promise free community college program, on average a low-income student had more than $7,000 in unmet need due to non-tuition costs because often low-income students at community colleges have most—if not all—of their tuition covered by their Pell Grant.9 Rather than using state tax dollars to provide cost of living subsidies to meet those needs, the program instead provided a $1,500 benefit in state tax dollars to higher-income students. New York’s Excelsior program—their version of free two- and four-year college—also failed to address the living costs associated with going to college (though it did less to help high-income students because it had an income cap).10

From the previous example, without a free college plan, the Pell Grant student would already have their tuition nearly covered, but be left with living costs—estimated at nearly $13,000 for just textbooks, housing, food, and transportation.11 While the wealthier student’s cost has been reduced by over $6,000, the low-income student has seen a meager reduction of $285. Meaning that while new funds have been allocated to make college more affordable, this program has not made college any more affordable for the low-income students who needs the help in the first place. 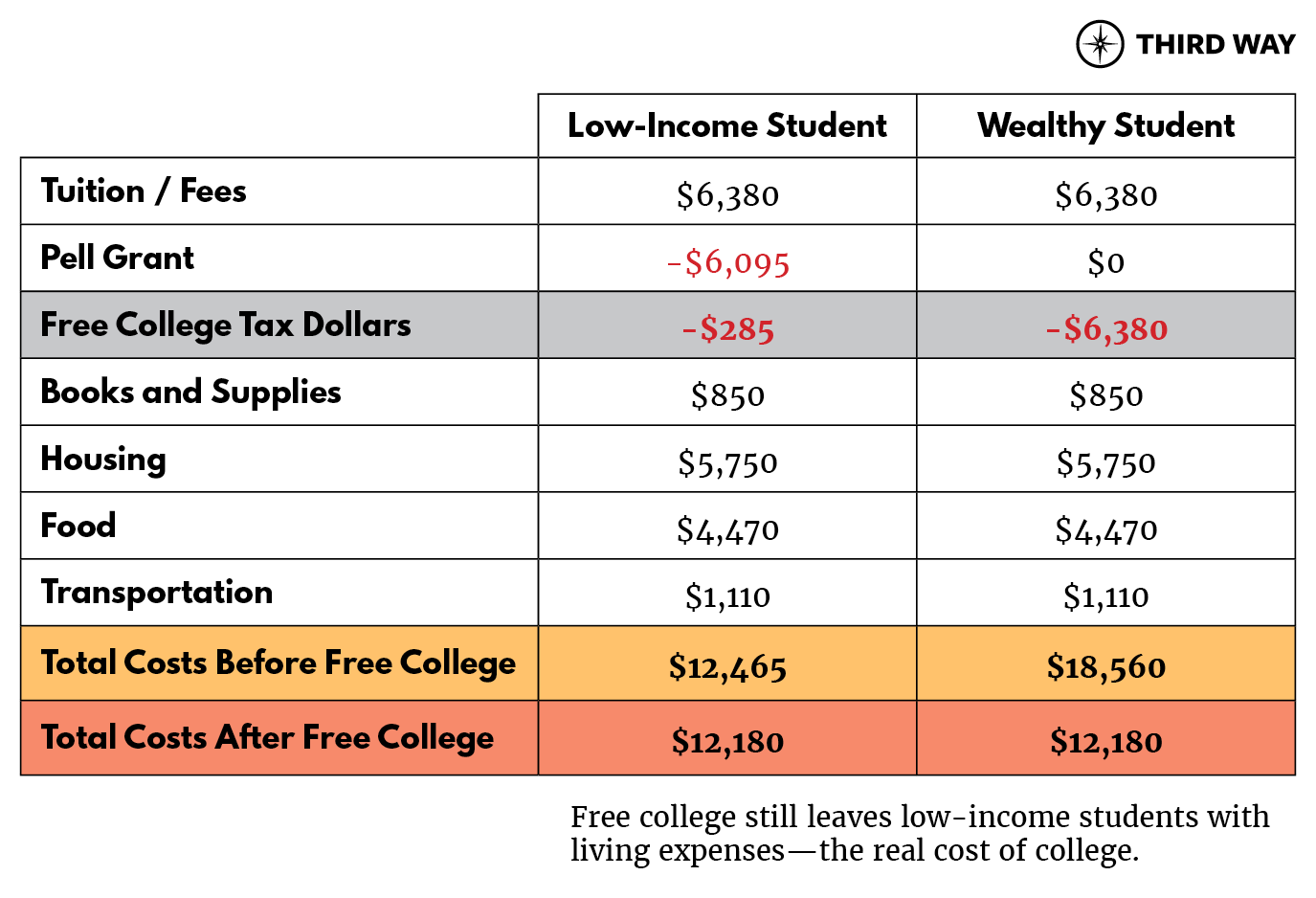 Lastly, while the intent of free college is to increase access for low-income students, it can have the opposite effect. Free college programs may impact where students choose to enroll, making them more likely to attend schools that might not serve them well or push them out of the schools likely to give them their best shot at success. For example, free college programs designed only for community colleges may discourage low-income students from attending a four-year school, even if they are academically qualified to do so. New research out of Princeton University and the University of Chicago has shown that diverted students—those who would’ve otherwise enrolled in four-year schools but instead enrolled in two-year schools—end up with worse outcomes, including being 18 percentage points less likely to complete a four-year degree compared to directly enrolling in a four-year school.12

And that can be problematic in the long run, as the wage premium of a four-year degree is greater than $14,000 more per year and $900,000 more over the course of a lifetime than a two-year degree, which means this diversion is ultimately setting low-income students back, not helping them succeed.13 Even for those who plan to start at community college to save money and then transfer to a four-year college down the line, data shows that transfer students on average lose 43% of credits during the transfer process.14 That means if those students would have otherwise attended a four-year college to begin with, they may be at risk of losing credits and taking longer to complete—leaving them with a bigger bill to foot in the end.

There are better ways to spend taxpayer dollars and improve college affordability, especially for those who need it most.

In a world of scarce resources, prioritization of funds is critical. Yet the hefty sticker prices of free college proposals on the table today, which range from $47 billion to $97 billion per year, would do little to nothing to help the students who need it most. Instead, policymakers should consider policies that prioritize spending and actually make college more affordable for low-income students. For example, policymakers could use that same amount of money to:

Making higher education more affordable and accessible is a necessity, but should taxpayer dollars subsidize tuition for the child of law partner or should it target the child of a teacher or the single mom trying to earn a better life for her family? When it comes to the popular bumper sticker of free college, buyer beware. Most free college programs are regressive, forcing working- and middle-class taxpayers to subsidize college costs for wealthier students.  Instead of jumping on the free college bandwagon, policymakers should look at ideas that would serve the students who need help the most—because that is the only way to spark real progress.

When talking about “free college programs,” it’s important to note that these initiatives (both those already enacted and proposed) come in many shapes and sizes. The design of any major initiative can have a major impact on exactly who benefits (or loses) from that policy—and by how much.

One important component of free college programs is exactly when the money kicks in for students. There are two typical models. “Last dollar” programs are those that eliminate tuition only after all grants and scholarships. This means that if a student receives a grant or need- or merit-based scholarship, the free college program would still use those awards and then just make up the difference after them of what a student owes. “First dollar” programs are ones that pay tuition up front and allow students to receive grants and scholarships to cover other costs associated with attending college. The former is much more regressive and the worst offenders when it comes to making working and middle class families foot the bill for wealthy students to attend college.

Free college programs typically only apply to public institutions, but sometimes they are only applicable to a specific level. Some states that have enacted free college programs have eliminated tuition at community colleges, similar to the plan President Obama proposed. Others have proposed or enacted programs that apply at four-year institutions, and some have done so at both levels.

Some programs simply eliminate tuition for students, though they often still require students with financial need to borrow to cover the other costs associated with attending college. Others have proposed “debt-free” college, a semantic change which could indicate that wealthy students who can afford to pay tuition would not receive the benefit and/or that the proposal would seek to cover the full cost of college for low-income students (not just tuition). The latter “debt-free” idea has not been enacted anywhere in the United States, so its details are less clear, though it is certain to a topic of conversation in the 2020 debate.

Other Characteristics of Free College Programs

In addition to the many different types of programs explained above, many existing programs policymakers have called “free college” also have other stipulations. Some have placed requirements based on academic progress or standing (i.e. having a certain GPA). Some have implemented residency requirements where graduates must stay in state or their “free college” tuition subsidy later turns into a loan they must pay back if they take a job out of state. And many programs are only for new students, right out of high school—excluding the growing number of adult and part-time students enrolling in college. All three of these restrictions, and others like them, are popular because they limit the cost of the program for policymakers—but they can end up hurting the students that need help the most.