What Might Happen in the Dreamers' Supreme Court Case?

This year, the Supreme Court is set to decide the fate of President Trump’s revocation of the Deferred Action for Childhood Arrivals (DACA). While the legal fight to protect Dreamers has been continuing for years, the eventual outcomes of the case are still unclear. The Court could side with Dreamers, a partial defeat to the Administration, or uphold the Trump Administration’s callous ending of DACA. This infographic details the most likely outcomes in the case and their potential implications. 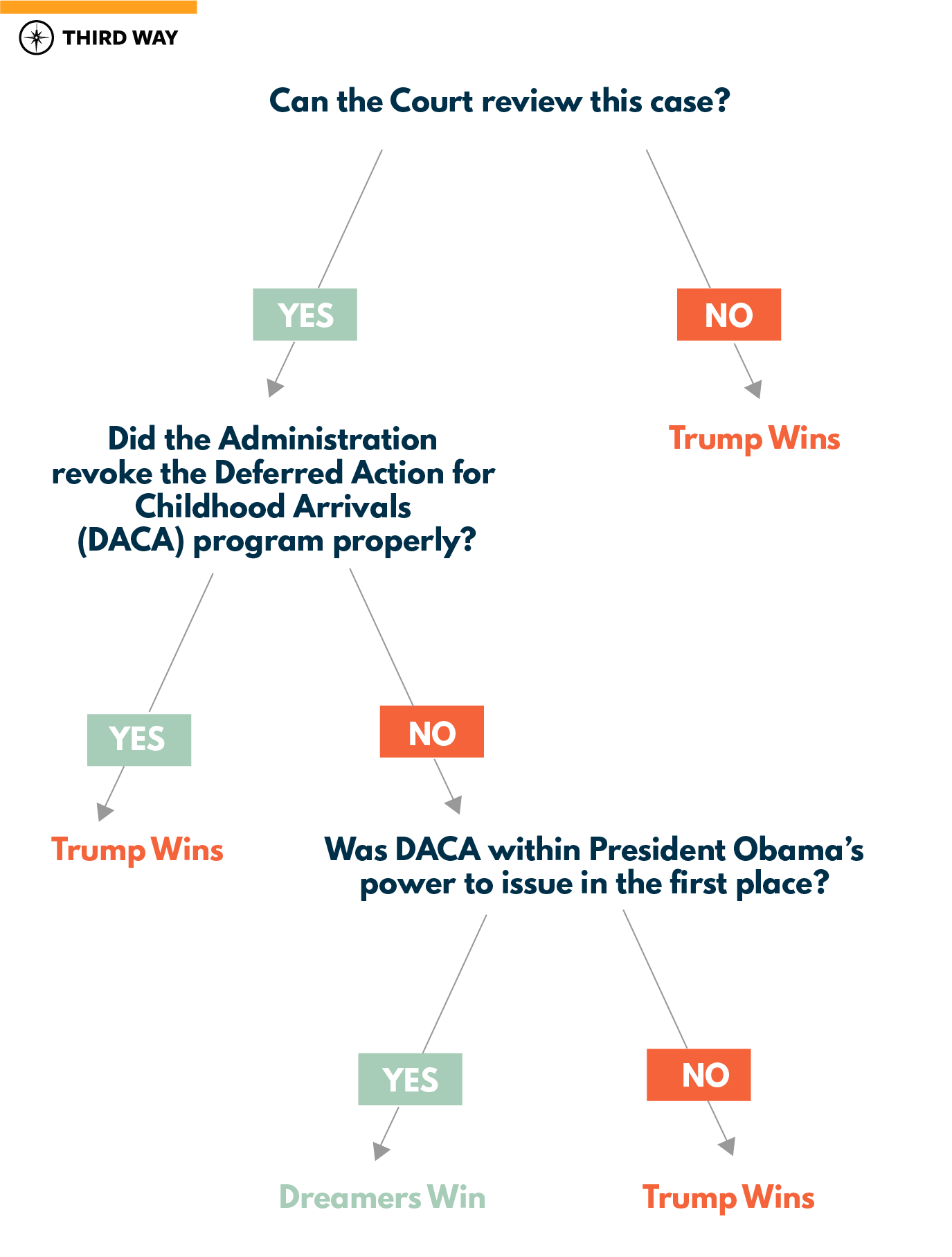 Issue 1: Can the Court review this case?

The Supreme Court first needs to decide if the DACA question is reviewable by the judicial branch. There are some issues the Court views as better suited to the more political branches of government (the executive and legislative) and thus outside its competence to determine.

No: If the Court decides it can’t review the case, Trump’s revocation of DACA will be upheld.

Yes: If it decides it can be decided, it will continue to the other issues in the case.

DACA was originally issued as an executive order from President Obama. Generally, later presidents have broad authority to revoke executive orders from past administrations, but there are some limitations. The later administration needs some legitimate reason to justify the change. It can’t just be “arbitrary and capricious.”

Yes: The Court could decide here that Trump lacked an adequate justification to revoke DACA. But even if it does, this could leave the door open for the Administration to re-revoke DACA at a later date once it has crafted a more substantial justification.

No: If Dreamers succeed on this issue, they will likely also have to clear the final hurdle below.

Issue 3: Was DACA within President Obama’s power to issue in the first place?

Finally, the Court could rule on the original legality of DACA. Trump and his allies have claimed that DACA was an executive overreach, but presidents have substantial authority to direct discretion in the enforcement of U.S. law. President Obama’s enactment of DACA effectively was a use of prosecutorial discretion in immigration enforcement.

No: If the Court rules DACA was illegal from the beginning, it will hand Trump a victory.

Yes: If the Court rules DACA was a legal use of executive power, Dreamers will win, though there could still be a danger of Trump trying to take a second bite at the issue at a late time.

What happens if the Court sides with Trump?

The on-the-ground implications largely depend on the Trump Administration. Trump has claimed there wouldn’t be widespread efforts to deport Dreamers, but his promises on anything are far from reliable. Even if Trump does not specifically target Dreamers for deportation, they could be at risk if they interact with law enforcement, and their ability to work and attend school would be significantly imperiled.

How can we guarantee protection for Dreamers?

Win or lose at the Supreme Court, the single best way to ensure lasting protection for Dreamers is through legislation. Over 80% of Americans agree that Dreamers are American in every way but legal status. The House passed the Dream and Promise Act in 2019, but the bill has been languishing in the Senate. Congress can and should pass legislation making sure that Dreamers can remain and thrive in the only home they’ve ever known.