In the 2016 election cycle, Democrats are facing a challenge they haven’t seen since the Vietnam War. National security, specifically terrorism, is now among voters’ most important public policy concerns, and they overwhelmingly trust Republicans more than Democrats to keep them safe. If handled ineffectively, this yawning gap between the parties on security poses a serious political risk to Democrats and continues to undermine public faith in government.

In this memo, we offer some data on the scale of the problem (Spoiler Alert: It’s YUGE) and some perspective on what is driving voter mistrust. We also provide a brief roadmap back for Democrats and preview the work that Third Way is doing this year to help close the security trust gap.

The Problem: National Security Is Crucial and Democrats Are Lagging

National Security Is Currently the Most Important Issue to Voters

Following the terrorist attacks in Paris and San Bernardino, national security and terrorism quickly eclipsed the economy to become the most important issue to the public, and it has remained that way.1 Third Way’s most recent nationwide public opinion poll, fielded from December 10-16 (shortly after San Bernardino), found that the public’s top priority was national security/terrorism.2 Nearly twice as many respondents were worried about security (29%) as were worried about the economy/jobs (15%). More recently, a Gallup poll from January 21-25 found that national security/terrorism/foreign affairs collectively remained the top concern of voters (23%), besting the economy (17%).3

The Electoral Cost to Democrats Could be Decisive

These public opinion data also translate into electoral results. History shows that when Republicans hold a large advantage over Democrats on security—and when security is highly salient to voters—Democrats lose elections.

It sounds like a tautology that the party with the advantage on the public’s most important issue, whether it be national security, the economy, or otherwise, almost always wins. But we pulled the data,4 and the pattern is clear: in only three elections since 1964 did Democrats gain seats in the House while behind on the public’s most important issue. In a year when the Senate is up for grabs and there are substantial pickup opportunities in the House, falling short on national security could blunt gains.

Not only do voters care a lot about national security, currently they also have a strong political preference on keeping the country safe: Republicans. Democrats are currently trailing Republicans by 16 points on national security and terrorist threats, which is a larger margin than they have ever trailed Republicans on the public’s most important issue in the last 50 years. The GOP now enjoys a security advantage by greater margins than we have ever seen in the post-9/11 era. As Figure 1 shows, the gap between Democrats and Republicans on national security and terrorist threats, while slightly less than it was a year ago, is now larger than it was when President Bush ordered the invasion of Iraq in 2003.5 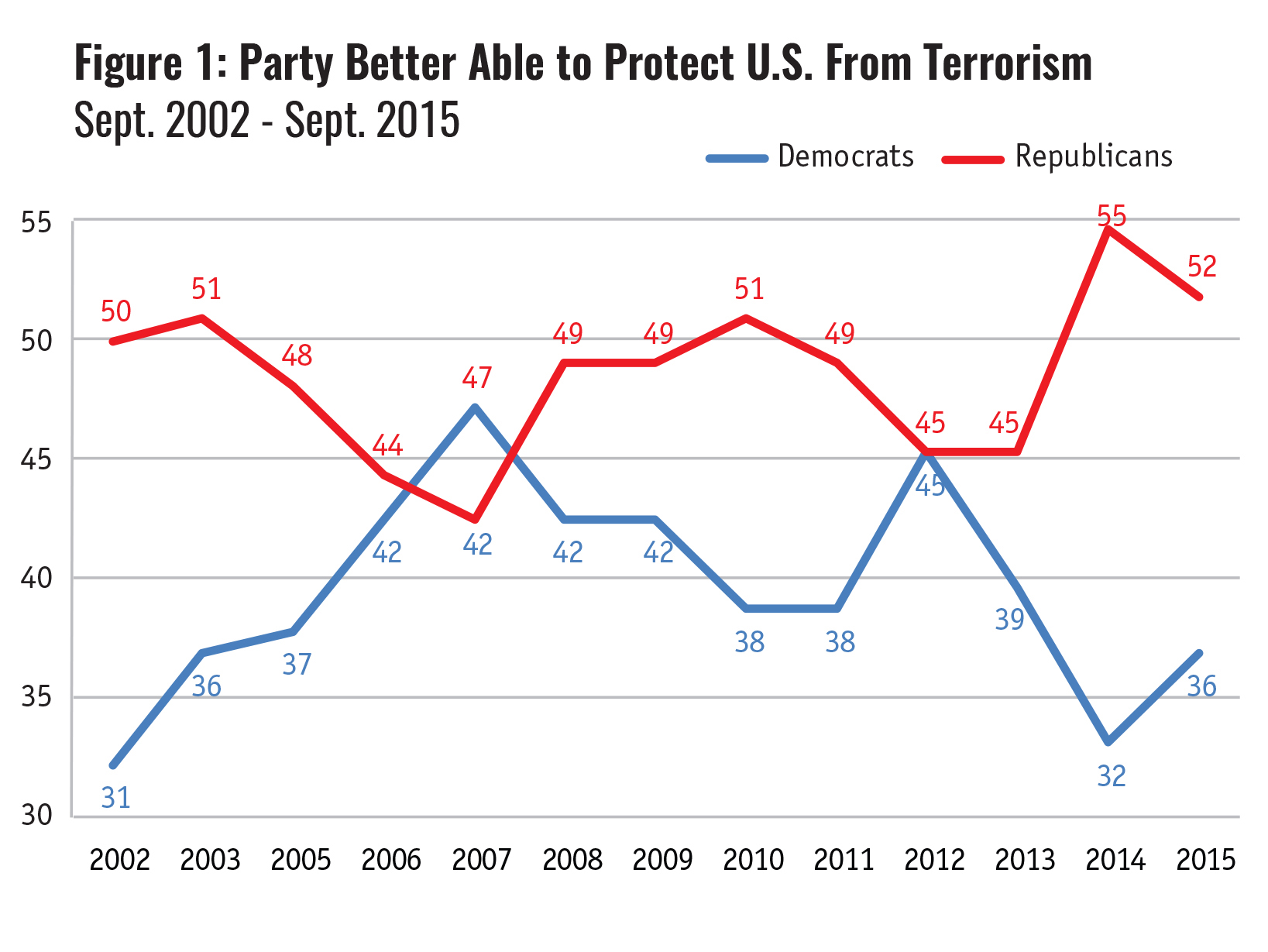 The Cause: Why Democrats Aren’t Trusted Enough on Security

Under President Obama, Democrats have kept the country safe, have aggressively taken on terrorists overseas, and have passed defense budgets greater than any during the Reagan Administration. This has not translated to voters, and while there are many factors that affect the security gap, Democrats have one crucial cause in their control—their own positioning on national security issues. And unfortunately, Democrats’ current messaging does not address the fears of the public.

Dismiss and Pivot: What Democrats Get Wrong on National Security

Following a terrorist attack on the West, the acute symptoms of fear may fade quickly, but there is evidence that heightened levels of anxiety in the general population can linger for years.6 Now, in the wake of the terrorist attacks in Paris and San Bernardino, the public is going through this psychological response to terrorism to a degree not seen since 9/11. For example, a Gallup poll from December 8-9, 2015, found that 51% of Americans are worried that they or a family member will be the victim of a terrorist attack,7 a higher percentage than at any time since 2001. Moreover, the survey found a widespread sense of hopelessness: confidence in the government’s ability to protect citizens from terrorism was at an all-time low of 55%. By comparison, immediately after 9/11, 88% said the government could protect them.

More recently, a Gallup poll from January 6-10, 2016, found that, for the first time, a majority of Americans (55%) are “dissatisfied with government security from terrorism.”8 The previous high-point for dissatisfaction was 47%, in January 2002, just four months after the attacks of September 11, 2001.

Beyond public opinion data, there are deep psychological reasons that security has such an outsized effect on voters. Research on the psychology of terrorism shows that, unsurprisingly, populations experience heightened levels of fear following terrorist attacks. What is surprising is how dramatically that fear leads voters to overestimate the risk of future attacks and devote an outsized share of attention to the threat of terrorism. Indeed, the fear of terrorist attacks in times like these is greater than that of common events like car accidents or shootings, and the politics reacts accordingly.

The problem with this extremely heightened level of concern for terrorism is that, all too often, Democrats seek to minimize the threat of terrorism. Instead of empathizing with voter fears, Democrats frequently dismiss them and explain that the actual threat of terrorism is very low, or they pivot from terrorism to other issues they feel more comfortable discussing. Both tactics are a mistake, because they ignore the psychological lens through which voters perceive the threat. This lens magnifies the probability of attack and the likelihood that a voter will know someone that is a victim. Focusing on the actual threat of terrorism, while ignoring voter perceptions of terrorism, is a recipe for electoral defeat.

Former Senator Mark Udall’s statement during his 2014 campaign that ISIS “does not present an imminent threat to this nation” is a perfect example. While factually accurate—at that time there was no intelligence indicating ISIS had the ability to attack the United States—this statement ignored voter fears that were driven by the beheadings of Americans and other ISIS horrors dominating the nightly news. The Republican Super PAC Crossroads GPS capitalized on this disconnect—omitting Udall’s clarifying remarks—in a $3.5 million ad buy that contributed to Udall’s loss.9

Democrats also are prone to paying lip-service to national security and terrorism before pivoting back to policy issues on which they have greater fluency. But this too is a mistake. Imagine a voter says, “I’m worried about crime. We had a shooting and a mugging last month. I won’t send my kids to the playground.” Their representative responds, “That’s why we need to fight poverty and improve our schools. If these kids had better opportunities, they wouldn’t be committing crimes.” At one level, the elected official is not wrong. Better schools and robust anti-poverty measures would likely reduce crime in the long run. But this voter would be left unsatisfied, because instead of answering her concerns, this representative retreated to his hobby horse. In order to convince voters that Democrats can be trusted on national security, they must engage the issue specifically and exclusively—without minimizing or pivoting away.

The Solution: Making Voters Believe That Democrats Can Keep Them Safe

While Democrats are in a deep hole on national security, there is much they can do to regain the trust of voters. Doing so is vital to regaining majorities and moving their domestic agenda. And more importantly, it is an essential part of restoring citizens’ faith in government.

Democrats must shed their unwillingness to discuss national security and take on the issue directly and proactively. When discussing national security, Democrats must show voters that they understand that their fears are substantial and real, and they must be unequivocal in acknowledging that ISIS is a direct threat to the people of the United States.

Even if voters believe that Democrats see the world as they do, they need to be reminded that they and their government are not helpless in the face of this threat. This starts with how they talk about national security. In Third Way’s nationwide survey in the summer of 2015, we tested a number of messages to see how voters would prefer to hear Democrats talk about national security. The top choice was a “tough and smart” message: “We must be tough and smart on national security, which means targeting and eliminating ISIS and other terrorist threats without getting dragged into another civil war.”

Voters want to hear that our government has the ability to keep them safe, but they prefer a balanced approach to the problem. President Obama did precisely this in his State of the Union address, reminding voters that “The United States of America is the most powerful nation on Earth. Period. It’s not even close…Our troops are the finest fighting force in the history of the world,” and “When you come after Americans, we go after you. It may take time, but we have long memories, and our reach has no limit.”

But it’s not enough to say “tough and smart” and then pivot back to domestic issues. Democrats must address the issue aggressively, repeatedly, and specifically, and they must work to build a credible record of concrete proposals on terrorism and national security.

Beyond rhetoric, voters must see that Democrats will support tough and smart action. Our 2014 focus groups showed that voters wanted specificity in addressing these crucial issues: what precisely are political leaders proposing to do? Give them timelines, strategy, and cost.

Voters need to know that Democrats are willing to commit the resources necessary to eliminate ISIS abroad and stop terrorists at home. This includes support for increasing U.S. airstrikes and the use of U.S. special operations forces in both Iraq and Syria.12 While it will be up to our allies in the region to be the primary ground force, we should do more to assist them by providing additional airstrikes, intelligence, surveillance, and reconnaissance (ISR), and whatever military equipment they need to defeat ISIS on the ground. And it also includes vocal support for the budgets Obama has proposed that are larger in real dollars than any during the Reagan Administration.

To better protect American citizens at home, Members of Congress should look for ways to improve counterterrorism capabilities here, including working with state and local law enforcement to identify shortfalls, reviewing screening programs for those coming to the United States, and barring those on the No-Fly List from getting guns.

While these actions are tough, it’s vital that Democrats be seen as smart as well. This means that Democrats must be cautious about going too far and being seen as reckless—voters do not want another American ground war or military adventurism that isn’t directed at keeping us safe. It also means keeping the focus on defeating terrorism and increasing the defense budget in a thoughtful, not wasteful, way. Again, the key is to be both tough and smart.

In order to do so, we offer ten basic actions that Members of Congress can take to demonstrate their tough and smart approach on national security:

Too much is at stake to be complacent. If we continue down the path the Democratic Party is on, voter distrust will only deepen and it will lead to disappointing results for Democrats in November. Working together, we can change the security narrative and, we hope, that electoral outcome.