Donald Trump hasn’t laid out many policy specifics, but one that has received attention is his plan to slap 45% tariffs on Chinese imports and 35% tariffs on Mexican imports. That means one thing for workers trying to enjoy their upcoming Memorial Day weekend—another full day of work just to afford the goods they were planning on buying and enjoying for a fun weekend.

While Trump says this is part of his plan to protect American workers, many experts warn that this would not only lead to a trade war, but would also trigger a global recession.1 But we wanted to get away from the experts and see what these tariffs would mean for an actual family over an actual weekend. Trump’s tariffs would make everyday items more expensive for American consumers. But how much more expensive?

We looked at 10 goods that a typical American family might buy for a fun Memorial Day weekend. This includes things like beach towels, outdoor chairs, a grill, swimsuits, and some things to do with the kids. Nine of the ten items come from China, and one (the tequila) is from Mexico. Trump’s tariffs on your Memorial Day weekend could cost you an additional $163. Here’s how that works:

We first looked (Table 1) at the average unit cost of these products as they hit the U.S. border and before retail markup, based on public data from the U.S. International Trade Commission.2 Based on a study from Progressive Economy, the final store prices of goods are roughly triple this “landed cost,” and then state sales tax adds to this as well.3 We then looked (Table 2) at how Trump’s 45% tariffs on Chinese imports and 35% tariffs on Mexican imports increase the unit costs of these products as they hit the U.S. shore. We assumed current import levels, noting that while foreign production may move to other countries (say from China to Vietnam) to reduce costs, that may be  easier said than done. A look at the beach chair market, for example, shows that on one website alone, consumers have a choice of 8,341 different varieties of beach chairs made in China.4 A website advertising Vietnamese made products lists only 12.5

In addition, for this paper, we assumed 100% of the tariff would be applied to the price of the final retail product. However, we do not include this increased tariff in the calculation that is generally used for retail markup. In other words, for the general rule that retail prices in stores are generally triple the price from the wholesaler, we did not triple the tariff. 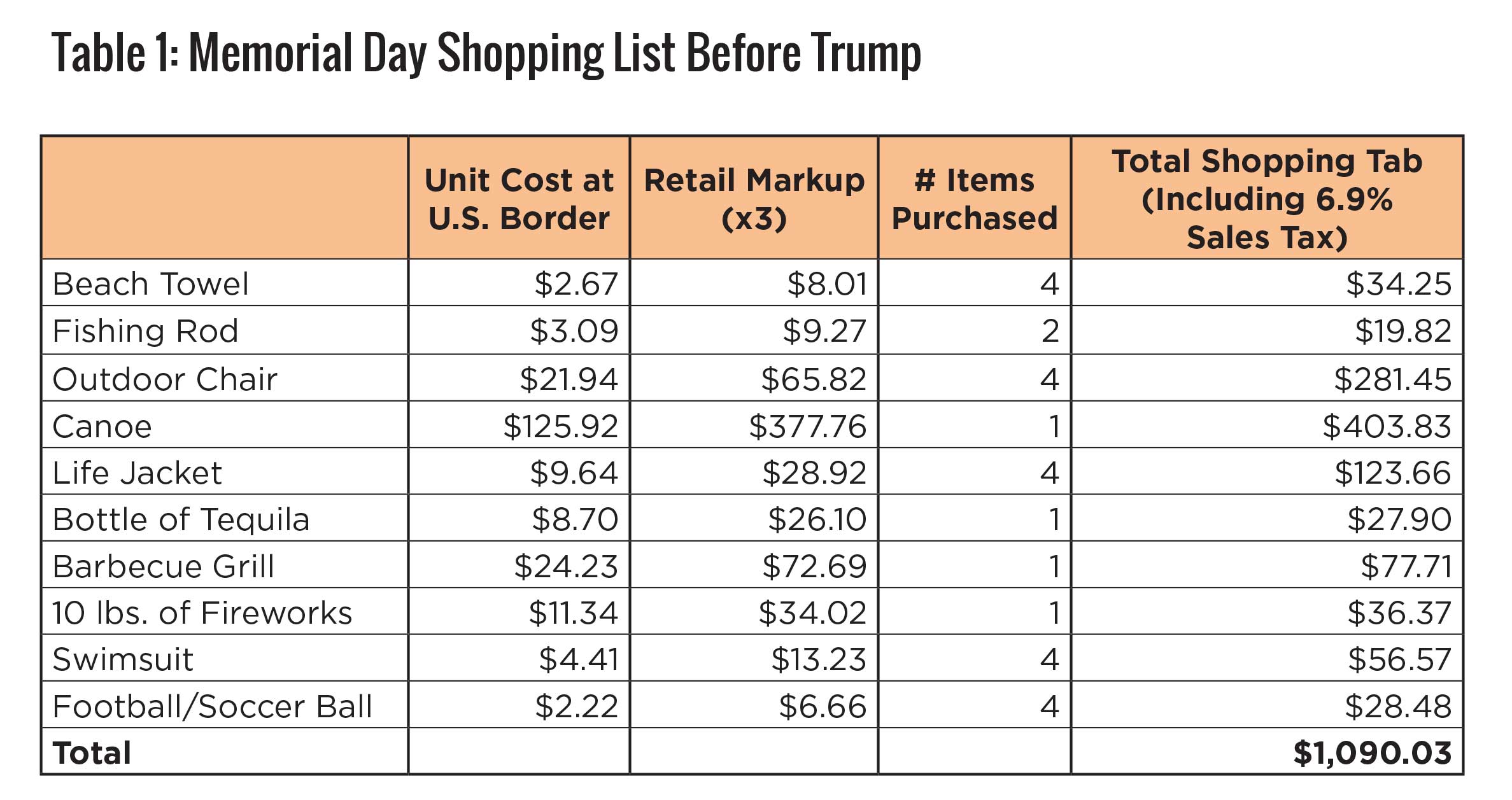 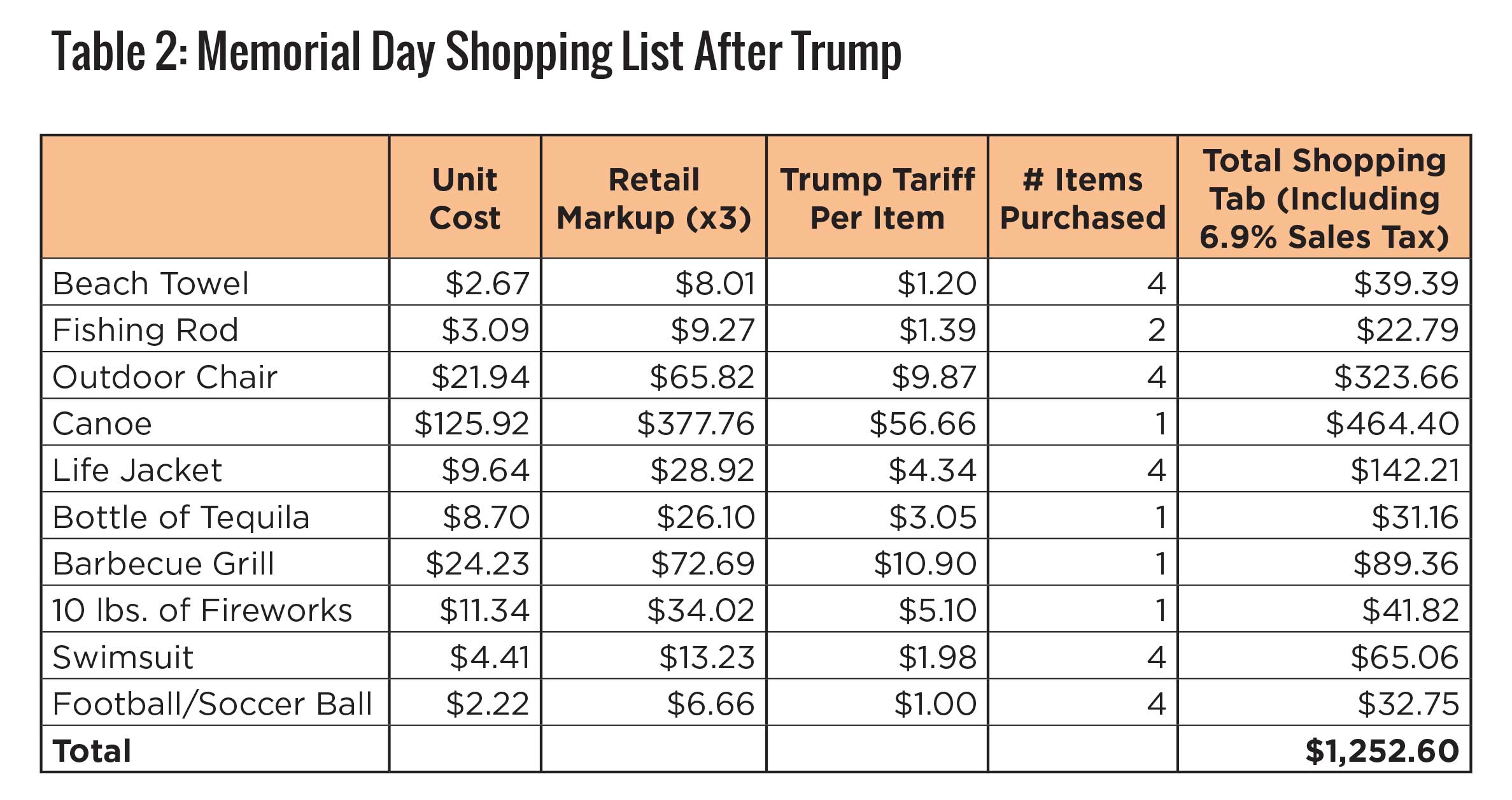 The total added cost of Trump’s tariffs for your Memorial Day weekend could cost $163.That’s what a 35% tax on Mexican tequila and 45% on everything else costs. Last year, over 37 million people, or about 14 million households, traveled on Memorial Day weekend.6 Not every family would buy these items for their trip, but if they did, Trump’s tariffs would be a $2.3 billion tax increase.

And keep this in mind: the average American gets paid about $25 per hour.7 Given that Trump’s tariffs will make these items $163 more expensive, the average worker would have to put in another full day of work to afford the exact same goods. Say goodbye to your three-day weekend.

Trump’s tariffs may start a trade war and may lead to a recession. But before that, they’ll simply hurt consumers. So much for his plan to protect Americans.