National security has emerged as a vitally important issue to voters across all partisan groups, second only to the economy. But most Democratic officials and candidates treat national security as if it were a third-tier concern of the electorate. This is an enormous mistake.

While Democrats seized the advantage on national security during the nadir of the Iraq War in 2006, they now face the biggest deficit on the issue—a “security gap”—that we have seen in the modern era. They currently trail Republicans among all voters by 19%, and they are losing Independent voters on this issue by a margin of two-to-one.

The paradox in these data is that voters actually believe Democrats are more like them on security than are Republicans. But they clearly want elected leaders who are tougher than they are to guarantee their safety. Thus, if Democrats follow the isolationist tendencies of the voters, they actually alienate those same voters on national security.

From June 22-26, Third Way fielded a national online survey of 1,200 registered voters (through Gerstein, Bocian, Agne Strategies). The goal was to understand how voters perceive the political parties when it comes to national security. The results confirm a number of voter concerns that we have previously documented.1 Most notably, national security is a top priority for voters, and they simply don’t trust Democrats when it comes to protecting the country.

But our data reveals another startling fact: a conventional political approach to closing the security gap—convincing voters that Democratic candidates are more like they are than are the Republicans—will not work. Indeed, it would almost certainly make matters worse.

How Important is National Security to Voters?

The Rising Salience of Security

Voters’ view of the importance of national security tracks current events. Following the Republican missteps in Iraq and Afghanistan, the salience of national security soared in the 2006 elections, when 40% of voters declared it to be the most important issue in CNN exit polls. The salience of security quickly diminished in subsequent elections, settling to a peacetime norm of 5% in the 2012 elections. But in 2014, with the rise of ISIS and the Ebola scare in the months preceding the election, this figure more than doubled, with 13% of voters saying it was the most important issue. With the continued threat from ISIS and general instability across the world, all the evidence pointed to this trend continuing, and it did. 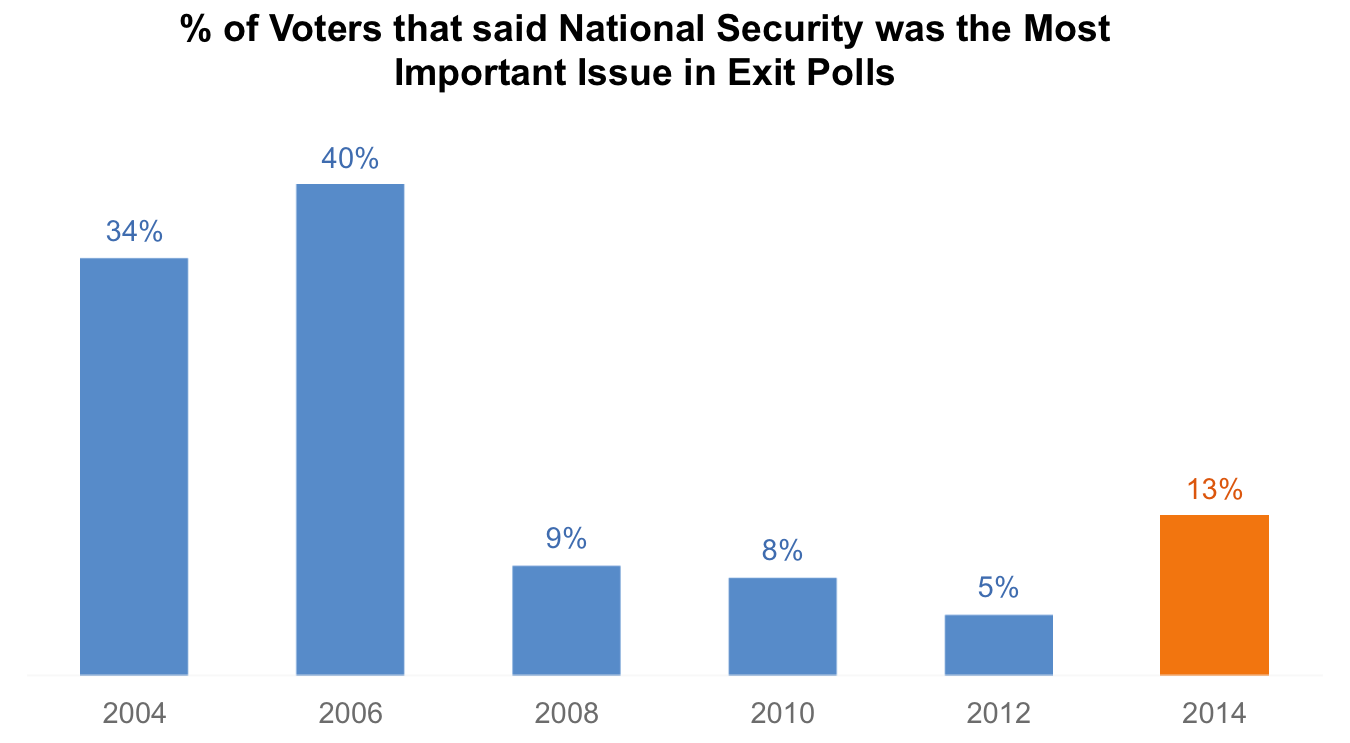 National Security Now is the Second Most Important Issue 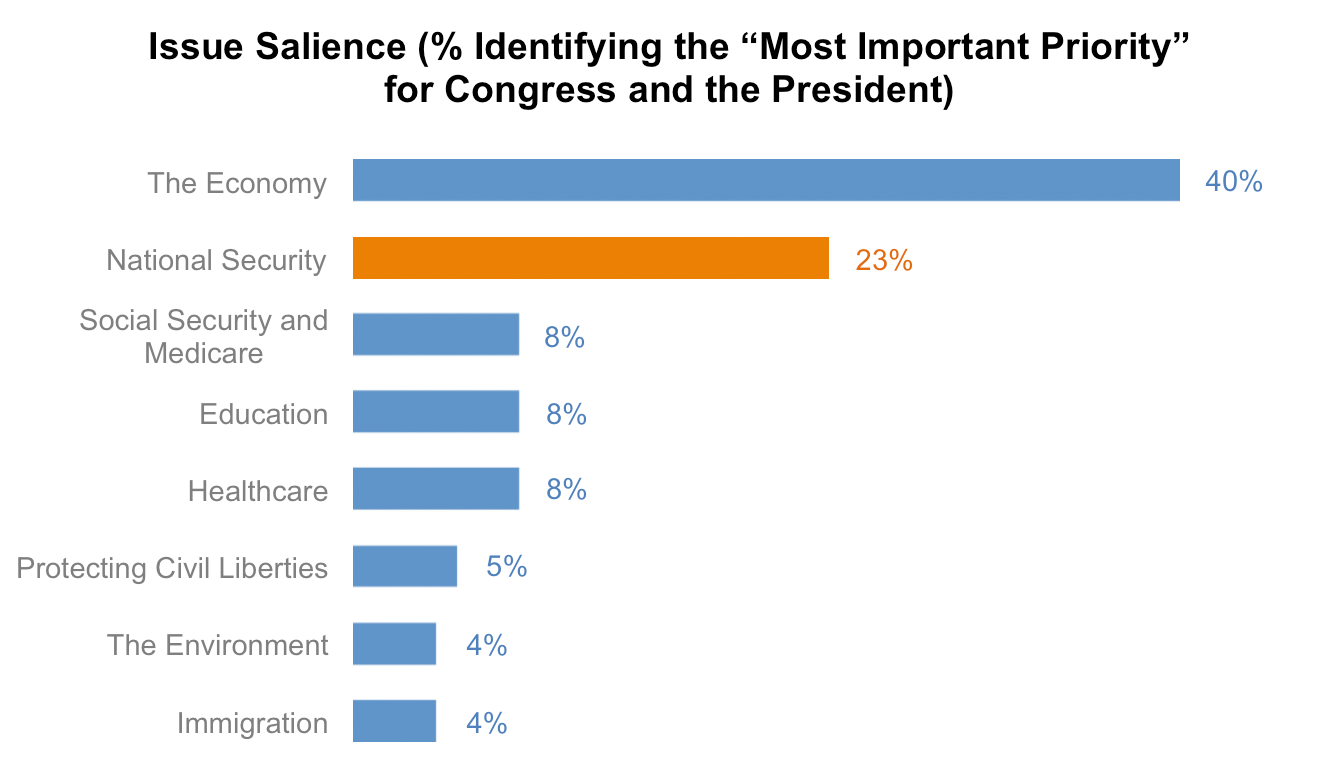 What is the Perception of Democrats on National Security?

Democrats at a disadvantage on National Security

The challenge for Democrats with the rising salience of national security is that our survey showed Republicans enjoyed a 19% advantage on this issue, the same advantage they held over Democrats right after 9/11.2 Worse yet, for voters ranking national security as their most important issue, the partisan gap was 43%. By comparison, while 40% of respondents still identified the economy as their most important issue, Democrats only enjoyed a 3% advantage on that issue.

Losing Independents on National Security by a 2:1 Margin 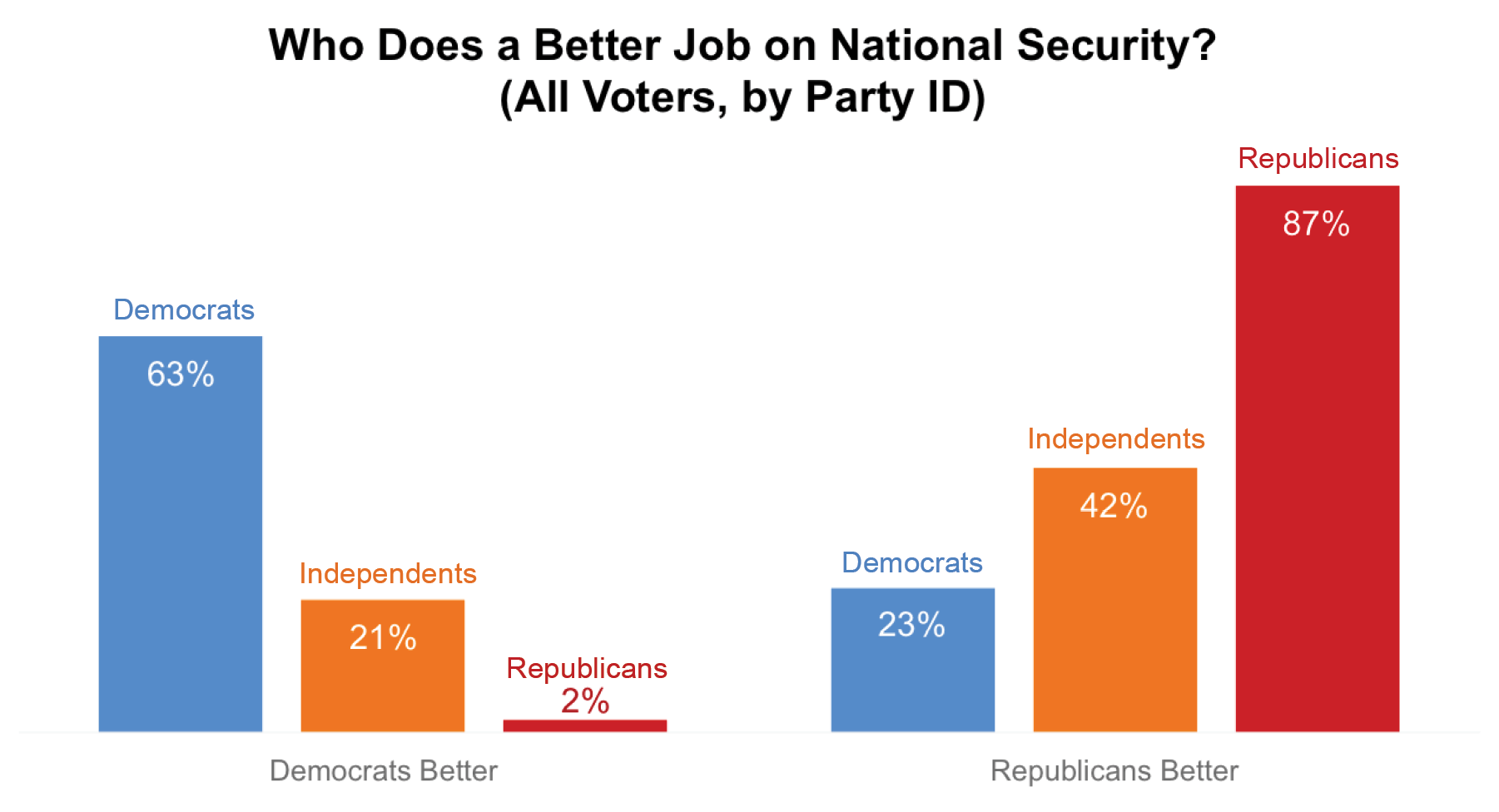 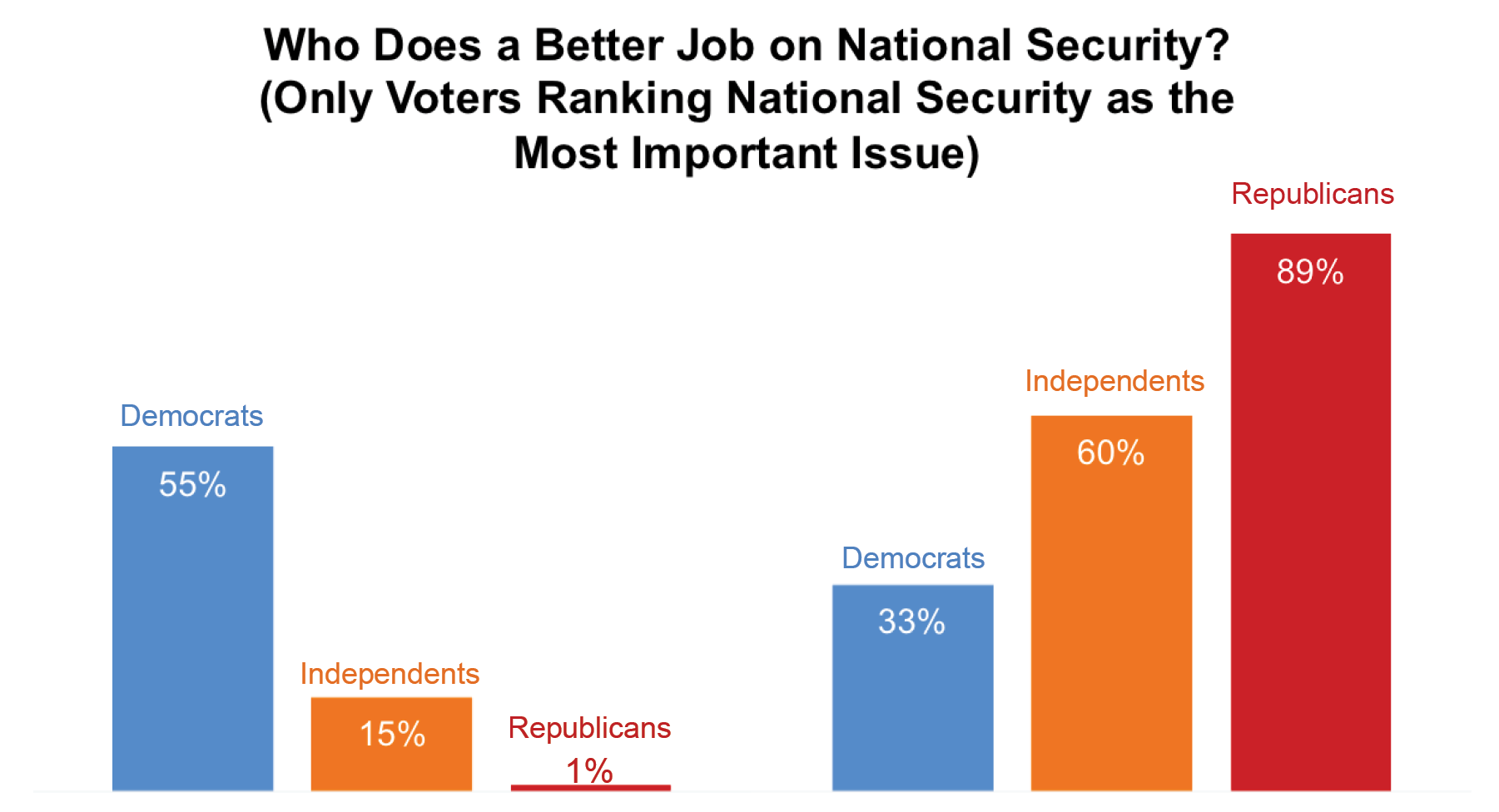 Underlying this deficit were voter perceptions that Democrats lack the characteristics needed to be trusted with our nation’s security. For example, Republicans were seen as both tougher and smarter than Democrats when voters were asked to explain how well the words describe each party (the partisan gaps are 30% and 3%, respectively). And Republican negatives appear to have faded. Third Way’s polling previously found that Republicans were seen as “reckless” on security matters.3 It is unclear if voters still blame Republicans for the ill-fated decision to invade Iraq, but voters no longer associate the word “reckless” with the Republican Party. In our poll, 48% said the word “reckless” describes Republicans “not too well” or “not well at all,” whereas only 37% of voters said “reckless” describes Republicans “well” or “very well.” 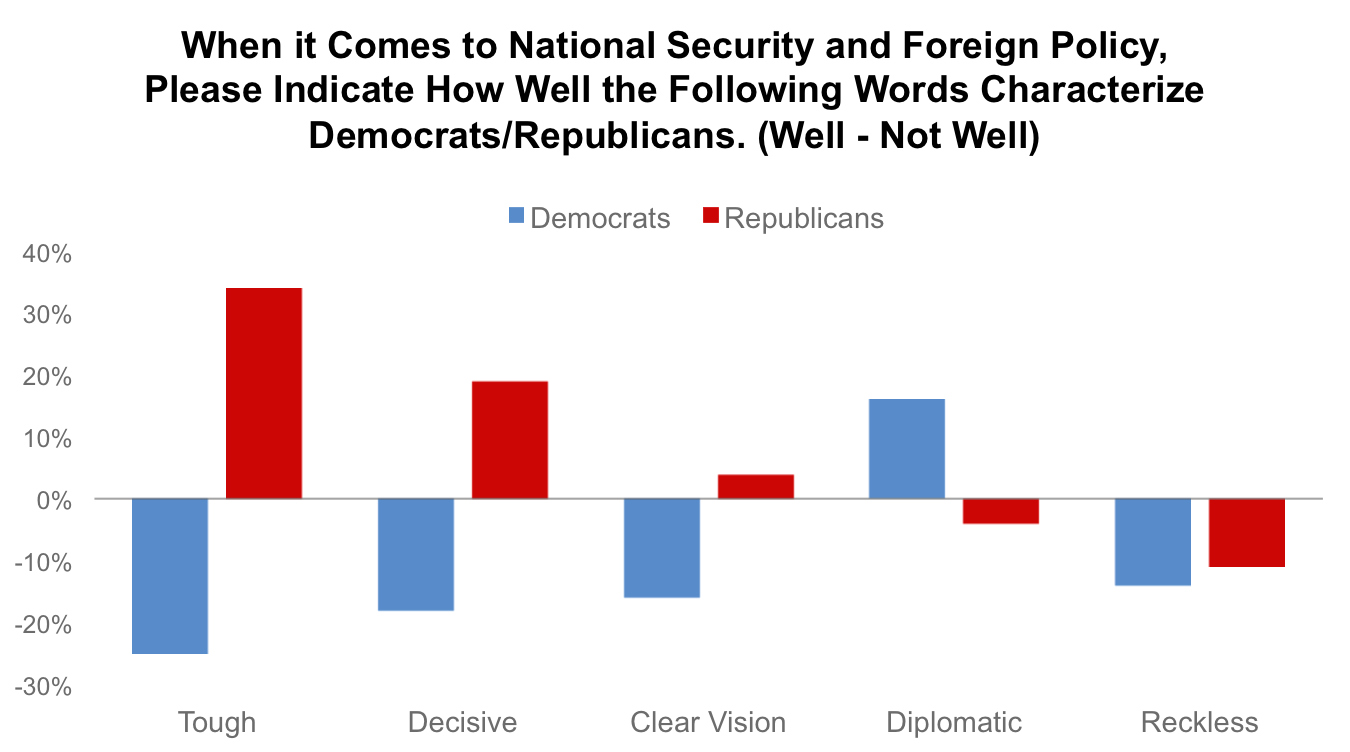 On the other hand, 54% of respondents said “stubborn” describes Republicans well, compared to 34% who said it did not. This was, by far, the largest negative for Republicans. Moreover, Independents and moderates cut against Republicans on “stubborn” by an approximately 2:1 margin. Even among Republican voters, this was seen as their greatest vulnerability.

How Did it Get this Bad?

The paradox is that, unlike most issues, where conventional wisdom suggests that a candidate should move towards the voters, our survey, and nearly all national security surveys, showed that voters prefer the Party they view as tougher than they are.

As further evidence of this phenomenon, in our survey we asked voters to rank the persuasiveness of national security messages, and the isolationist message (“Instead of serving as the world’s policeman and putting American troops at risk, it is time for us to reduce our international involvement and instead invest at home”) was the least preferred message for moderate voters (out of 10 choices).

On the other hand, we also tested a hyper-interventionist message (“9/11 taught us that we must take the fight to the enemy before they reach us. We put America at risk if we do not confront bad actors. In order to keep us safe, we must pre-emptively deal with emerging threats.”) This message finished second to last for moderates and was the least preferred message amongst all voters.

The lesson from all of this is clear—voters don’t want reckless interventionism, but they want to know that those representing them aren’t afraid to intervene. If the Democratic Party moves more towards isolationism, it will sow the seeds of its own continued national security deficit.