It is a national security priority that the United States produce more microchips domestically. Currently, the US military is unsustainably dependent on overseas microchip production. If the US were to be cut off from chip imports, the military would be hard-pressed to make up the gap, and the US military would become dangerously undersupplied.2 The CHIPS-plus Act addresses this risk by appropriating $52.7 billion for microchip production in the United States.3

Microchips are used in various modern weapons systems including F-35 fighter jets which depend on advanced chips produced by the Taiwan Semiconductor Manufacturing Company (TSMC).4 If the US were involved in a prolonged conflict, a supply chain disruption from Taiwan could prevent our marquee jets from entering the battlefield.5 In the Ukraine conflict, the geopolitical-economic implications are already playing out. In April, Commerce Secretary Gina Raimondo stated that US defense contractors were having difficulty meeting orders for Javelin anti-tank missiles to send to Ukraine because the Javelins required 250+ chips per system and there was a global chip shortage.6 The most crippling sanctions the US has targeted at Russia has throttled Russia’s access to chips and advanced technologies. US sanctions have hampered Russia to the point they are using household appliance chips in military systems to compensate for their chip shortage.7 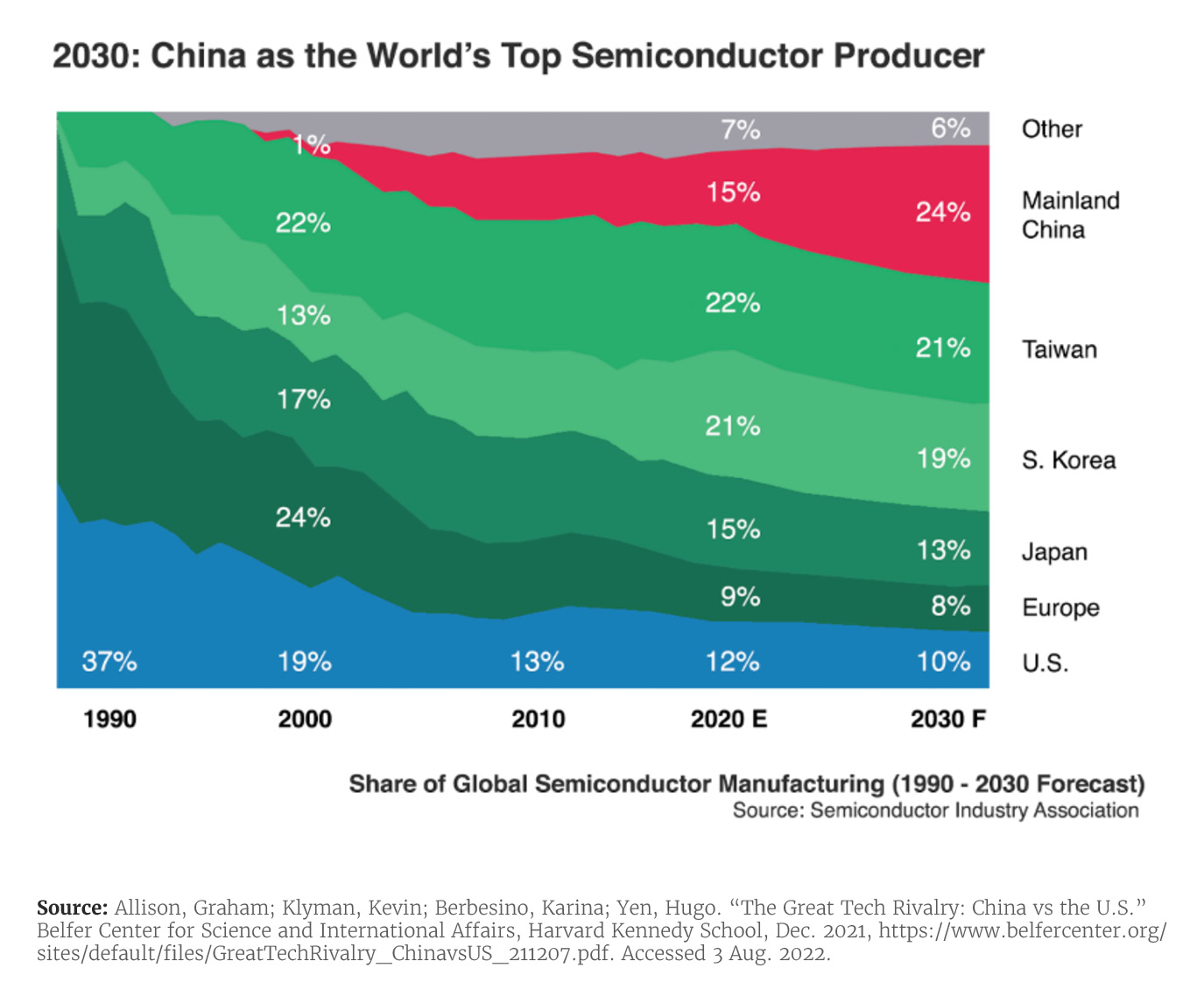 As of 2021, the United States military received roughly 2% of its microchips from domestic and secured facilities known as “trusted foundries”—many more of them came from commercial producers based in East Asia, particularly Taiwan.8 It has always been necessary for the US government to subsidize and sponsor some chip production for the US military because the military uniquely requires specialized small batches of the ultra secure, nuclear proofed chips for which there is little financial incentive to produce in the commercial market.9 Much of the militaries’ technologies such as basic laptop computers depend on commercial chip access.

Roughly only 10% of global chips are made in the US, and the most sophisticated chips the military needs are only made in East Asia.10 In a world where China is America’s rising competitor and potentially most sophisticated adversary, a real conflict in East Asia could broadly disrupt chip shipments to the United States and impinge on America’s sustained fighting capabilities. Taiwan specifically is both the largest producer of advanced chips and China’s greatest target. CIA Director Bill Burns has called China's intention to annex the island as a when, not an if.11 A Chinese attack on Taiwan could endanger US military supply chains and demand serious intervention on that basis alone.12

As Third Way’s National Security team outlined in the launch memo for the US-China Digital World Order Initiative, with every new technology market China enters and comes to dominate, the opportunity for China to spread digital authoritarianism increases.13 To stand up to Chinese geopolitical-economic competition, the CHIPS-plus Act appropriates $1.5 billion for wireless internet research efforts like 5G, on top of what is being appropriated for microchip production in the United States.14

As it stands some American firms are continuing to face semiconductor supply shortages which delay the manufacture and export of American technologies, giving space for overseas competitors with better chip access to step ahead of the US.15 In a recent letter to Congress, Defense Secretary Lloyd Austin and Commerce Secretary Gina Raimondo outlined how Europe, India, and Japan have all injected funds to increase their own chip production, with China devoting far more than the rest, at $150 billion since 2020.16 The US’s chip access across the board, and in turn America’s technology dominance, will fall behind if it doesn’t act now.

This bill will make a difference to American commercial and economic competitiveness. Other countries are acting aggressively to provide incentives and secure investments as part of the industry’s current investment cycle. – Commerce Secretary Raimondo and Defense Secretary Austin Stress National Security Imperative to Pass Domestic Semiconductor Manufacturing Bill in Letter to Congress, 13 Jul. 2022

There are two main reasons why China having better access to chips and being able to export even more of their commercial technologies is a security threat—spreading Chinese digital authoritarianism and enhancing the Chinese government’s surveillance capabilities. Aside from Chinese firms generating profits which can in turn fund the People’s Liberation Army, when technologies like Chinese telecommunications products become standard in a country, they increase China’s ability to influence that country. Unlike American technology, Chinese telecommunications products make it easier for authoritarian technological controls to be installed on countries' networks.

The widespread use of Chinese technology slides countries toward Chinese-style authoritarianism, whether or not it is actively encouraged from Beijing. Human Rights Watch documented how China’s ZTE networks allowed Ethiopia to enable local surveillance and technologically stifle dissent within the country.17 Conversely, Lithuania recently encouraged citizens to junk Chinese-made mobile devices after the Lithuanian cybersecurity agency found Xiaomi phones had censorship software pre-installed which could be activated to censor phrases such as “democracy movement.”18 Erosion of our allies’ democratic systems towards authoritarianism detracts from US global security. In responding to the recent Russian invasion of Ukraine, while Lithuania has been contributing additional arms to Kyiv, the increasingly semi-autocratic democracies of Turkey and Hungary have been a thorn in NATO’s side.19

Additionally, Chinese commercial products can be used by the Chinese government to eavesdrop on other countries’ networks. In 2018, Le Monde reported that Chinese-installed technology in the African Union headquarters in Ethiopia was used to spy on the organization.20Deputy Assistant Secretary of Defense for Cyber Policy Mieke Eoyang has also explained that because of the increased espionage risk when countries adopt Chinese technology, the US sometimes chooses not to share sensitive intelligence even with allies.21 When the US cannot feel comfortable sharing critical intelligence with its partners, it is notably harder for the US to achieve security goals.

Finally, America will need to be a center of innovation to out-compete Chinese technology companies and counter the risks they pose. The CHIPS-plus Act authorizes nearly $170 billion for regional innovation hubs, research grants, education, and technology standards setting.22 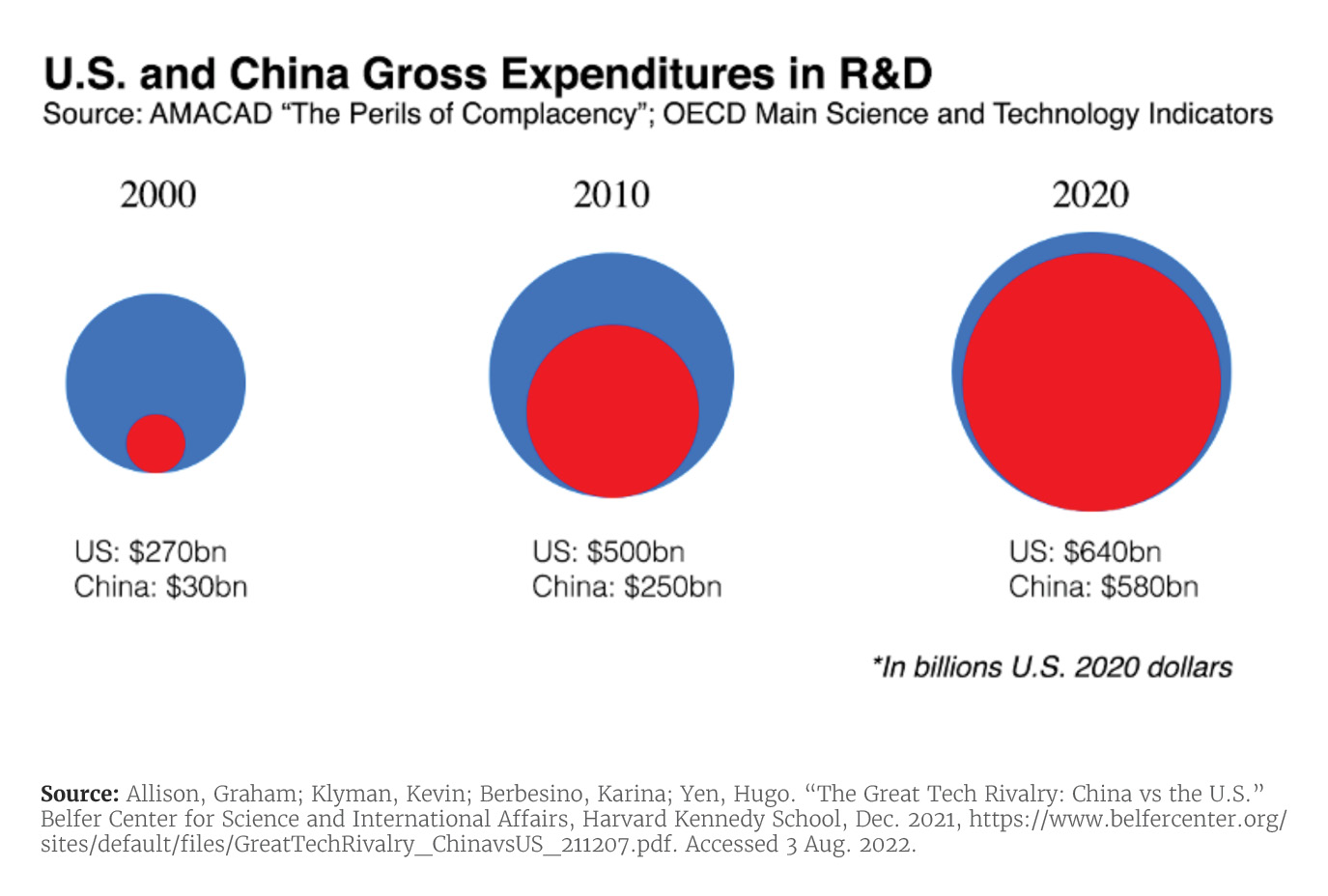 Over the past century the United States reached global military superiority with our technologically advanced economy which can produce both highly valuable dual-use civilian products like smartphones, as well as purely military technologies like stealth fighter jets. Innovation in the civilian and military domains has informed each other, spreading democratic norms and helping America fight to uphold democracy. China has been investing more and more into their domestic innovation, now set to outpace the United States in research investment by 2025.23 If the US isn’t careful it could lose to China because they now dominate the next highly important technology—artificial intelligence, 6G, the metaverse—and this potentially costs our strategic edge in combat.

CHIPS-plus authorizes new capacities for American research and technology standards setting bodies so America can maintain its role as the world’s leading innovator. The bill expands education, funding opportunities, and standard-setting authorities for new artificial intelligence research.24 In October 2020, former Under Secretary of Defense Michèle Flournoy and current Director of National Intelligence Avril Haines issued a report noting these steps were imperative for the future of US security.25

CHIPS-plus is a $280 billion investment in the future of American national security and innovation. Increasing American production of semiconductor chips now, stemming the global spread of digital authoritarianism tomorrow, and bolstering STEM research, education, and innovation for years to come.