The Science-Based Case for CCUS

Where the science leads, we must follow. If we believe the scientists and modelling that tell us that climate change is an existential crisis, then we must also believe them when they tell us how to solve this crisis. And they agree that we must use carbon capture, use, and storage (CCUS) technologies both to lower emissions and remove carbon dioxide from the atmosphere.

Global authorities on climate change such as the Intergovernmental Panel on Climate Change (IPCC), the International Energy Agency (IEA), the National Academies of Science, Engineering, and Medicine (NASEM), have extensively and impartially modelled the role that certain technologies will need to play to limit global warming to 1.5 to 2°C. They don’t choose favorites, but they do consider all the potential technologies that can help solve climate crisis and the specific role that they could play. They’re clear that without CCUS, it will be much harder and maybe impossible to reach net-zero emissions by 2050.

With a new administration vowing to rejoin the Paris Agreement and committed to letting the science guide policy again, we need to make sure the science is easily accessible and clearly understandable.  Here, we’ve condensed the global scientific consensus on CCUS into a repository of highlights, figures and quotes from the IPCC, IEA, and NASEM. 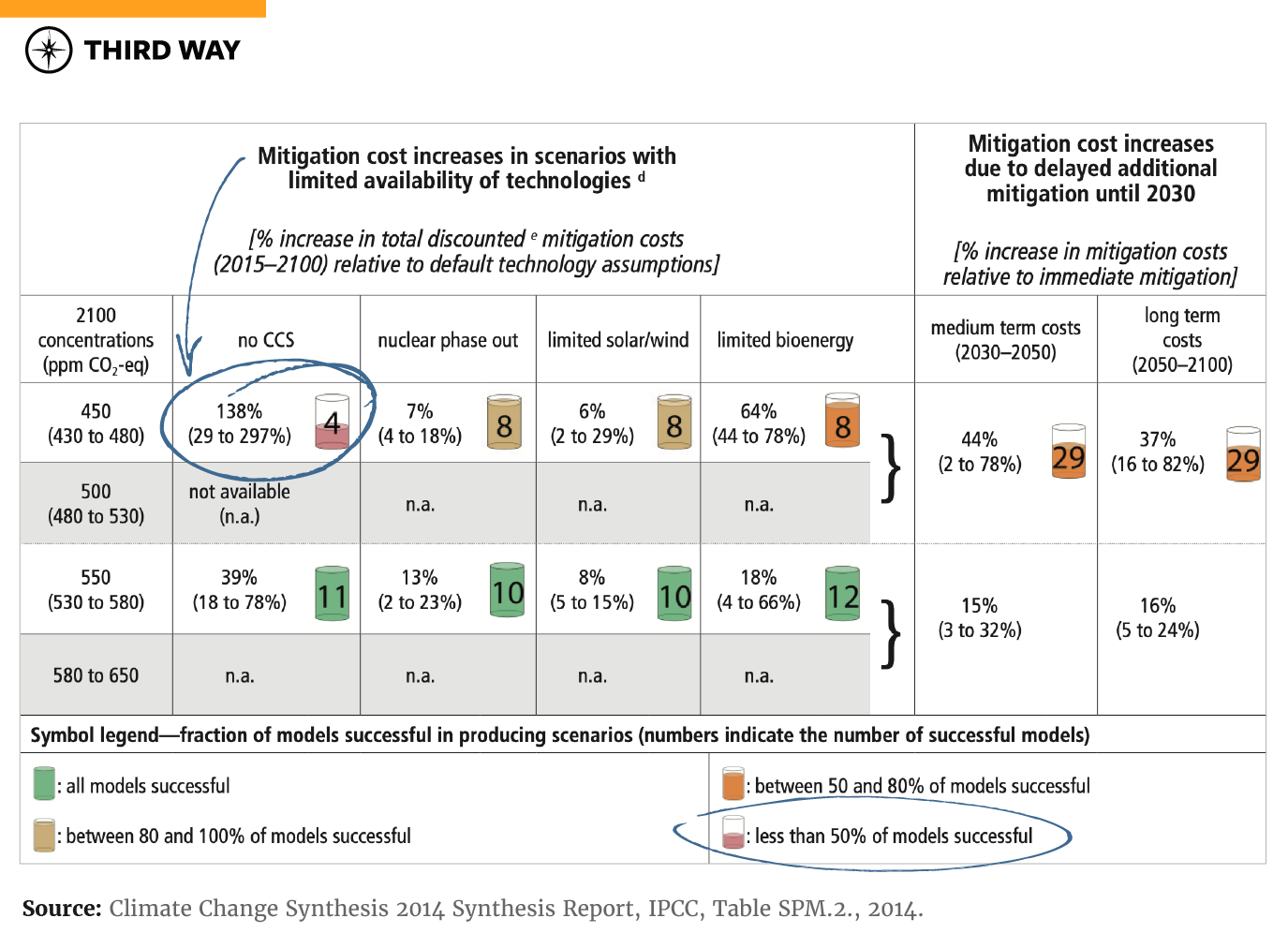 “Scenarios that are likely to maintain warming at below 2°C include more rapid improvements in energy efficiency and a tripling to nearly a quadrupling of the share of zero- and low-carbon energy supply from renewable energy, nuclear energy and fossil energy with carbon dioxide capture and storage (CCS) or BECCS [Bioenergy with Carbon Capture and Storage] by the year 2050.” -p. 82

“Studies have shown the importance of CCS for deep mitigation pathways (Krey et al., 2014a; Kriegler et al., 2014b), based on its multiple roles to limit fossil-fuel emissions in electricity generation, liquids production, and industry applications along with the projected ability to remove CO2 from the atmosphere when combined with bioenergy. This remains a valid finding for those 1.5°C and 2°C pathways that do not radically reduce energy demand or do not offer carbon-neutral alternatives to liquids and gases that do not rely on bioenergy.” -p. 134

Founded in 1974, the IEA is an autonomous intergovernmental organization of nations across the globe that provides “authoritative analysis, data, policy recommendations, and real-world solutions to help countries provide secure and sustainable energy for all.” 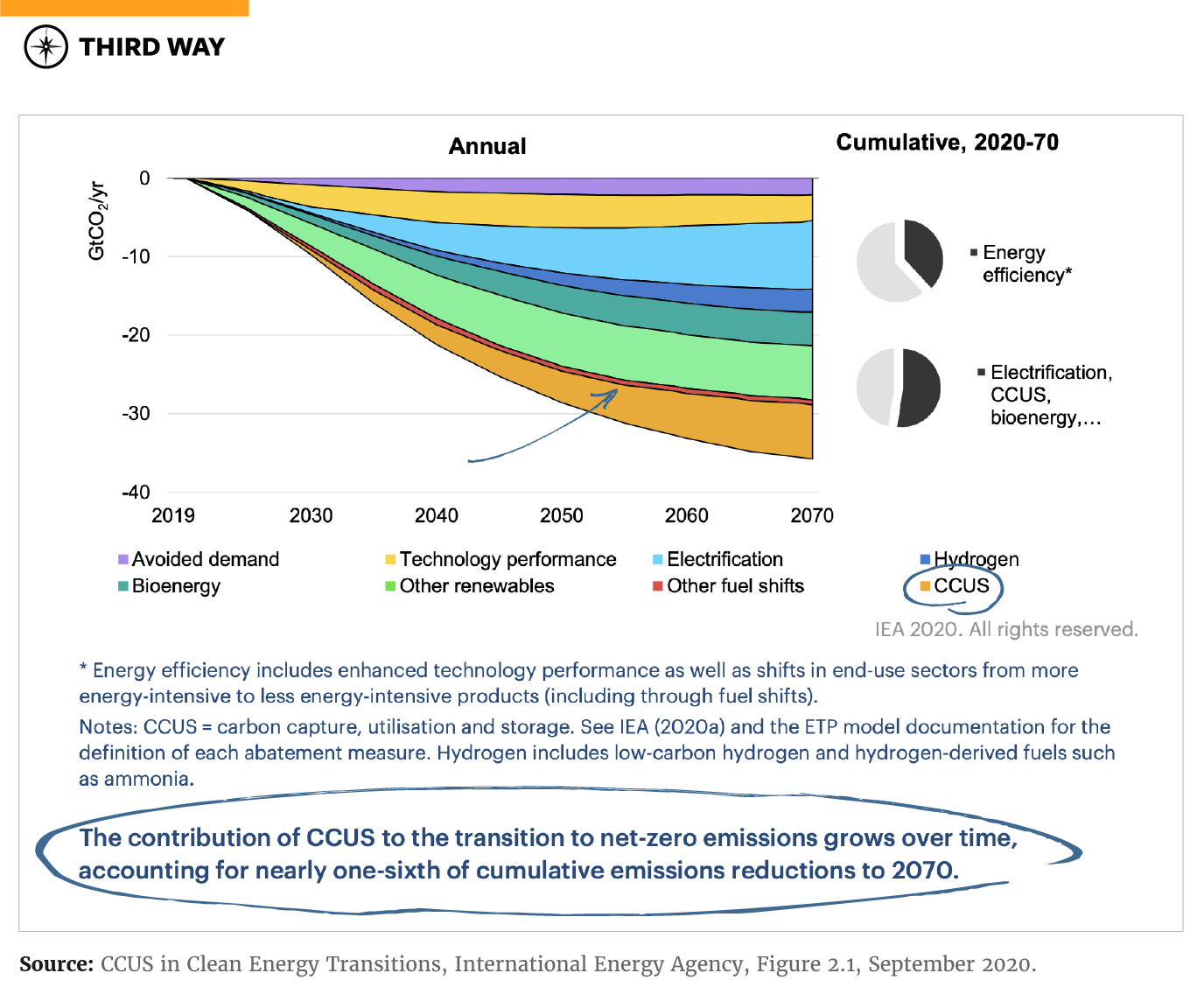 “Reaching net zero will be virtually impossible without CCUS.” -p. 13

“It is the only group of technologies that contributes both to reducing emissions in key sectors directly and to removing CO2 to balance emissions that cannot be avoided – a critical part of “net” zero goals.” -p. 13

“A faster transition to net zero increases the need for CCUS. CCUS accounts for nearly 15% of the cumulative reduction in emissions in the Sustainable Development Scenario. Moving the net-zero goalposts from 2070 to 2050 would require almost 50% more CCUS deployment.” -p. 14

“Heavy industries account for almost 20% of global CO2 emissions today. CCUS is virtually the only technology solution for deep emissions reductions from cement production. It is also the most cost-effective approach in many regions to curb emissions in iron and steel and chemicals manufacturing. Captured CO2 is a critical part of the supply chain for synthetic fuels from CO2 and hydrogen – one of a limited number of low-carbon options for long-distance transport, particularly aviation.” -p. 14

The National Academies of Sciences, Engineering, and Medicine (NASEM)

NASEM  consists of the United States’ foremost scientists from the three private, nongovernmental institutions: National Academy of Science, National Academy of Engineering, and National Academy of Medicine. The Academies work together “to provide independent, objective analysis and advice to the nation and conduct other activities to solve complex problems and inform public policy decisions to advise the nation on issues related to science and technology.” 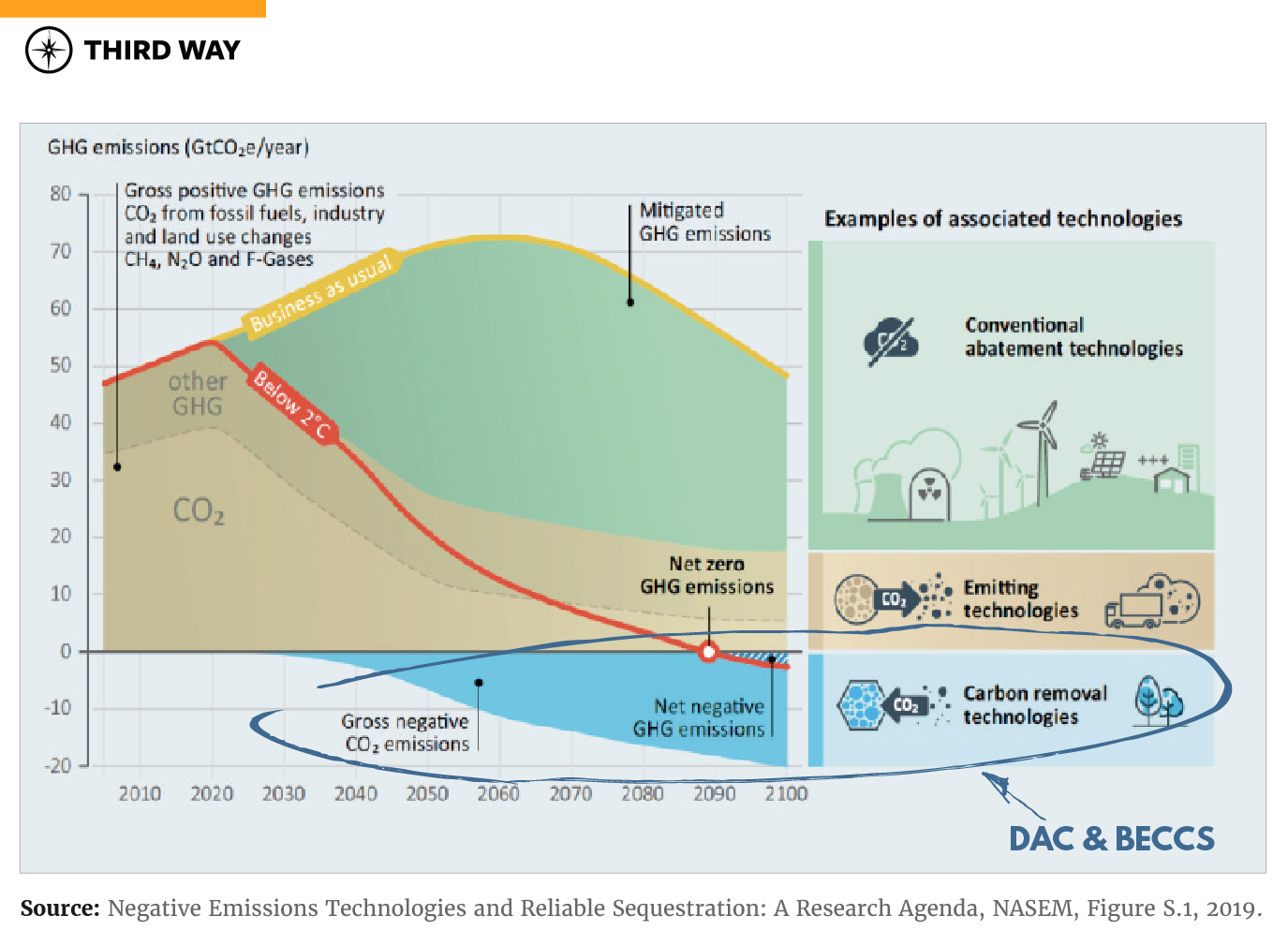 “If made less expensive, direct air capture technologies could be scaled up to remove very large amounts of carbon.” -p. 353

Climate policymakers should pay very close attention when the top global authorities on climate and energy modeling, like the IPCC, IEA, and NASEM, are all telling us loud and clear: we’ll need carbon capture, use, and storage (CCUS) to achieve our climate goals.

The important question, then, is not whether we need it, but how much and how fast we can deliver it. It’s great news that the number of CCUS projects has grown over the last few years, but the IEA says that we’ll need a 100-fold scale up of large-scale CCUS facilities in the next 20 years to reach net-zero emissions by mid-century. Accomplishing this will take both significant RD&D and more robust and long-term market incentives for captured, stored, and utilized CO2. The next Congress and next administration have the opportunity to put CCUS on a path to widescale commercial deployment and must quickly seize that opportunity for the sake of our climate goals.