Historically, Democrats have represented the working class. As the party of labor unions and social welfare policies, working-class voters flocked to Democratic candidates for decades, scoffing at Republicans as the party of big business and tax breaks for the richest Americans.

In recent years, however, the tide has shifted. Democrats have won elections with an evolving coalition, consisting primarily of college-educated voters, especially college-educated women, and racial and ethnic minorities. This coalition was enough to carry the White House, Senate, and House in 2020. But there are warning signs that if Democrats want to hold their majorities long term, they cannot afford to leave some core components of their previous coalition behind. Specifically, they need to maintain a critical share of non-college educated voters, who, according to exit polls, made up 59% of the country’s electorate in 2020.

In key Senate races that Democrats need to win to hold or expand their narrow Senate majority in 2022 and 2024, the problem is worse, as larger shares of the state electorates are made up of non-college voters. And Democrats have performed even worse with non-college voters in these swing states than they have nationally in recent contests.

While Democrats’ eroding support with non-college voters is a serious problem, some recent Democrats have provided a model for how to hit the necessary benchmarks with these voters. By learning from those Democrats who have won a critical mass of this group and investing in appealing to non-college voters of all races over the next two cycles, Democrats can turn the tide and solidify their winning coalition.

National exit poll data over the past few cycles paint the clearest picture of Democrats’ declines with non-college voters. Under Barack Obama, Democrats won this group in both 2008 and 2012. But while Obama won non-college graduates 51-47% in 2012, Clinton lost these voters 44-52% in 2016. In 2020, Biden split the difference with a narrow 48-50% loss.

But Democrats’ problems are not exclusively with white non-college voters. While Biden won non-white voters without a college degree by 46 points, the trend with these voters is not in Democrats’ favor. From 2016 to 2020, Trump increased his support with non-white non-college voters from 20% to 25%. While this may not look like a large share, because of the centrality of non-white voters to Democrats’ coalition, any slippage with this group does not bode well for future elections and requires attention. 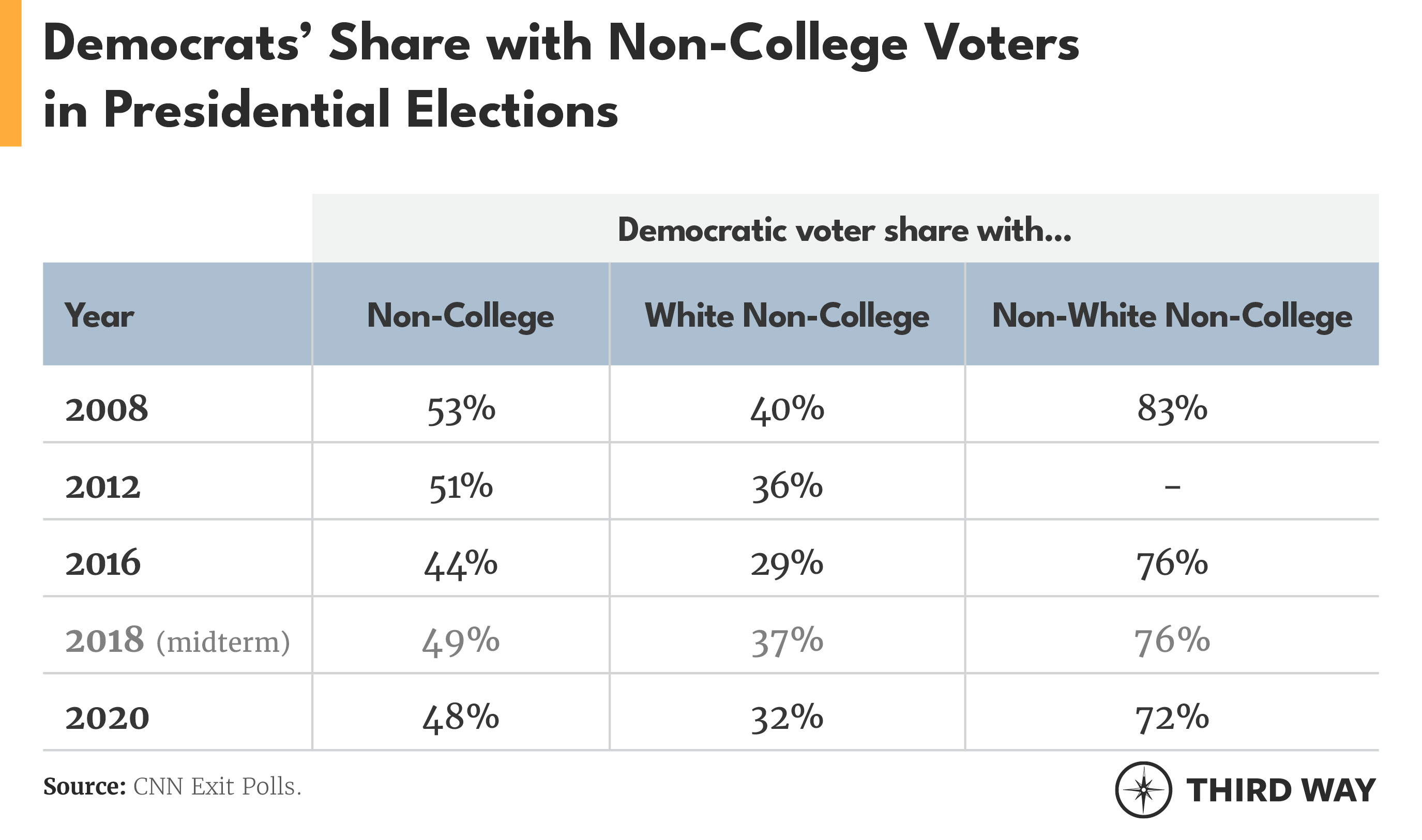 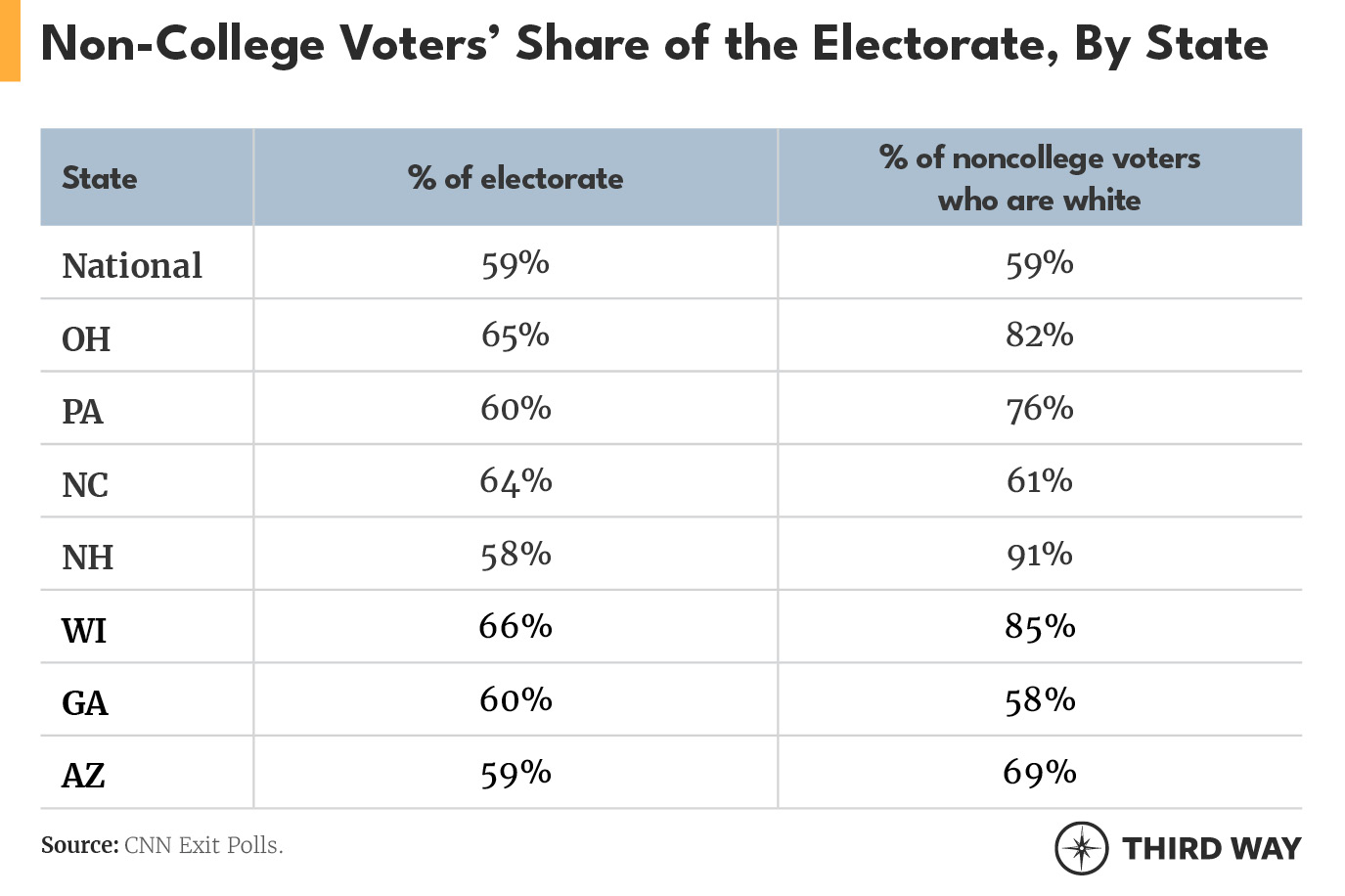 Where Do We Go from Here? Democrats’ Benchmarks and the Way Forward 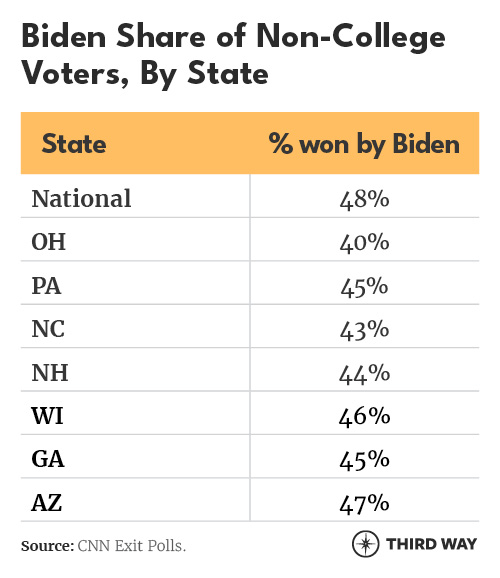 The table below includes benchmarks that Democrats need to hit with non-college voters in key Senate race states for 2022, if they manage to hold Biden’s 2020 performance with college-educated voters constant. 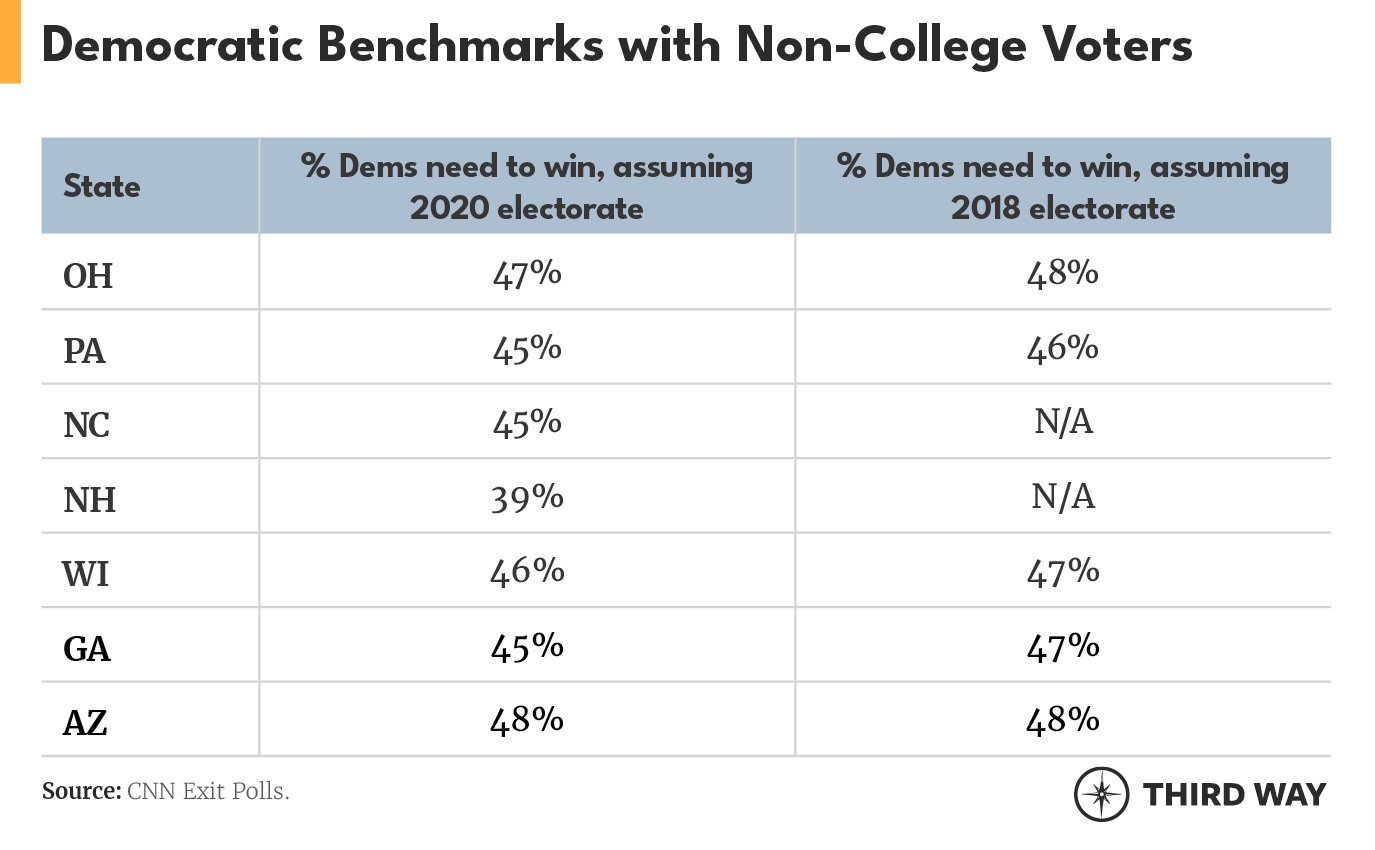 It is worth noting that Democrats may lose some support with college-educated voters in the post-Trump era, particularly in areas that have supported Republicans in the past and may simply have been turned off by Trump. To be confident in their electoral future in these swing states, Democrats should aim to exceed these benchmarks with non-college voters. This would mean making gains with non-college voters across the board, not just in Ohio and North Carolina, and investing in non-college voters of all races at a national level.

Looking at Cooper and Brown’s strategies for appealing to non-college voters may be useful for Democratic campaigns in their states in the future, as well as in states with similar demographics makeups. In Ohio in 2018, Sherrod Brown appealed to non-college voters in his state by hammering home his slogan around “the dignity of work” and highlighting policies that would make work pay for all Americans. He urged Democrats to speak about manufacturing policies, including job training and community college accessibility, trade policy, and energy policy. He has also been a strong advocate for raising the minimum wage. Brown proved to Ohio voters that he was fighting to keep good-paying manufacturing jobs in their communities. He spoke about progressive Democratic priorities like fighting climate change, but he did so by focusing on areas where climate policy can directly benefit American workers, such as green manufacturing jobs that would be created by investing federal money into building solar panels and wind turbines in America.

Finally, Brown is a staunch defender of unions, and he ties Republicans directly to their anti-worker policies that give tax breaks to large corporations, diminish the power of unions and leave working people behind. His outspoken commitment to unions and his outreach to non-college educated voters might explain his impressive overperformance in Ohio union households, where he won 62% of the vote, compared to Biden’s 43% in 2020.

While upping Democratic margins with non-college voters is no easy feat, certain Democratic candidates’ recent records of success prove that the party should not give up hope. Rather, it should double down on its efforts, paying close attention to those successful campaigns’ investments, policy priorities, and political playbooks to solidify and bring back a critical mass of non-college voters of every race.