It would be easy to compare this year’s American Rescue Plan to the 2009 Recovery Act. That was the last time Democrats had to fix an economy-wrenching crisis inherited from Republicans. And many of the people on Biden’s team today helped implement the Recovery Act in 2009. But this is not 2009, and Biden and Democrats are exactly right to trumpet this achievement rather than worry about a 2010-style midterm backlash.

President Biden’s and Democrats’ American Rescue Plan is backed by 75% of Americans and a majority of Republicans. Its scale matches the urgency of our current crises. And it delivers immediate and meaningful support to the Americans who most need it. Obama’s Recovery Act was urgently needed and necessary. But its components were more abstract and delayed, and its scale more measured. The Recovery Act was also saddled with other measures far less popular, like TARP, which rescued hated financial institutions. And the promised recovery was stunted by the Greek debt crisis at the end of 2009. As a result, it never achieved bipartisan approval from the American people.

Democrats face long-established structural challenges in the 2021 and 2022 elections. When a party takes control of the federal government, they typically lose seats in subsequent state and federal elections. But Biden and Democrats are right to see the American Rescue Plan as an opportunity to try and reverse this trend rather than an event that will hasten it.

The American Rescue Plan is immediately helping people in ways the Recovery Act did not.

No two crises are alike, and the current two-fold crisis of a global pandemic and economic downturn is unprecedented in the last 100 years. What is also clear is that Biden’s and Democrats’ response through the American Rescue Plan delivers more immediate and concrete support to the American people than the 2009 Recovery Act, which addressed the 2008–2009 Great Recession.

The Recovery Act may have been fitting for the structural challenges of the Great Recession, but much of it did not focus on immediate and tangible aid for individuals and families. In addition, because the economy was in free fall in 2009, the Recovery Act's impact was less perceptible to the American people at the time. A plurality of the $787 billion package went toward health care costs spread out over two years. Another component was infrastructure spending, which had a lag time before creating jobs or improving lives. And it included small tax credits, which did not provide prompt or concrete support for people in financial distress.

This year’s $1.9 trillion American Rescue Plan was designed to deliver where its predecessor fell short on urgent and tangible support for individuals and families. The package includes $1,400 stimulus checks, which have already hit bank accounts. Child tax credits up to $3,600, which will be allocated monthly beginning in July and on 2021 taxes. A $300-a-week extension in federal unemployment benefits, which will run until September. And it includes hundreds of billions more in aid for states and local governments, vaccination distribution, schools, and health care subsidies. 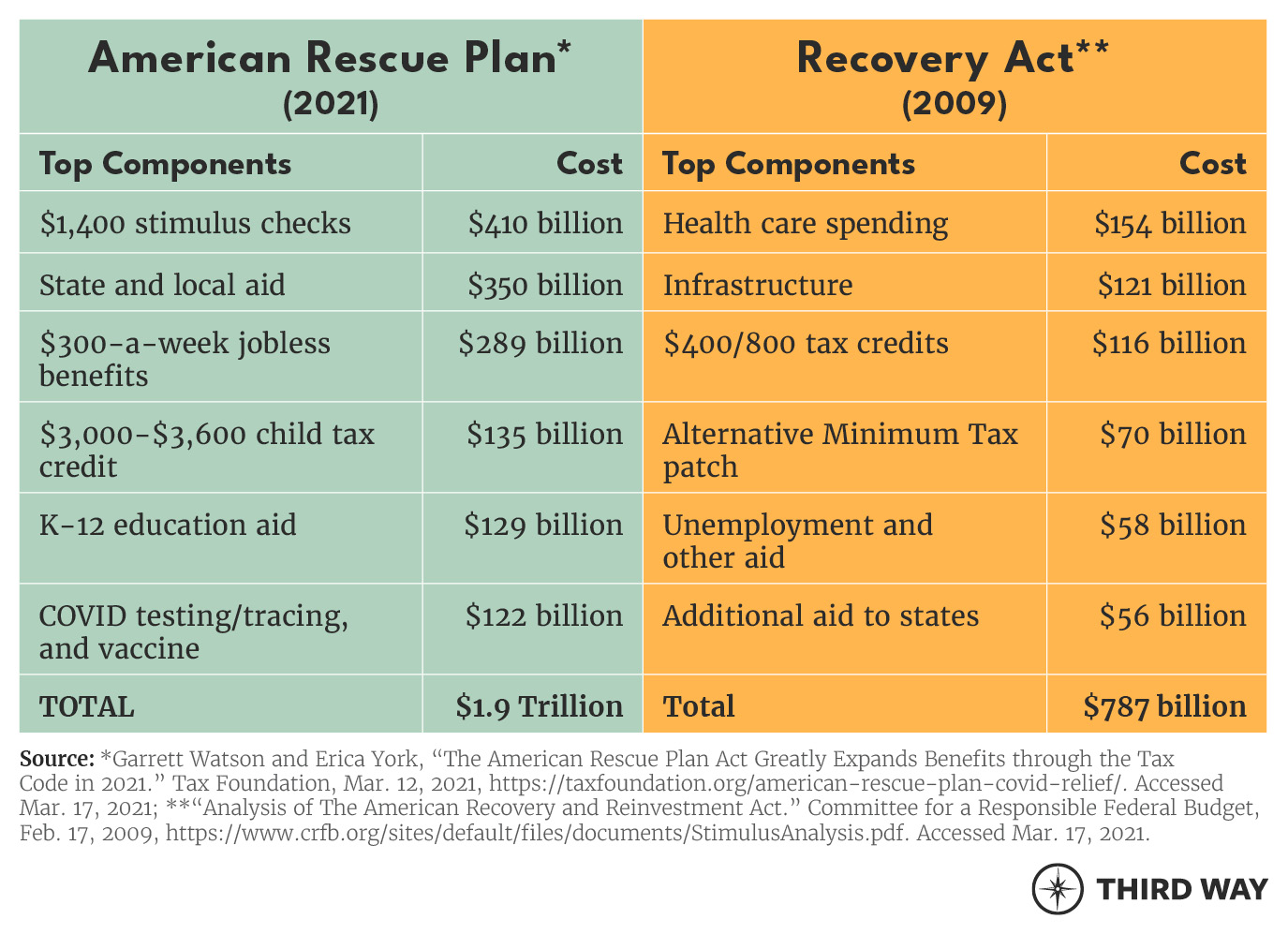 The American Rescue Plan has strong and broad support, while the Recovery Act had narrow partisan support.

The American Rescue Plan has strong and broad support from the American people. In 2009, the Recovery Act never enjoyed this same popularity, and ultimately, this contributed to Democrats’ losses in the midterms. By election night in 2010, just one-in-three voters said the stimulus had helped the American economy. 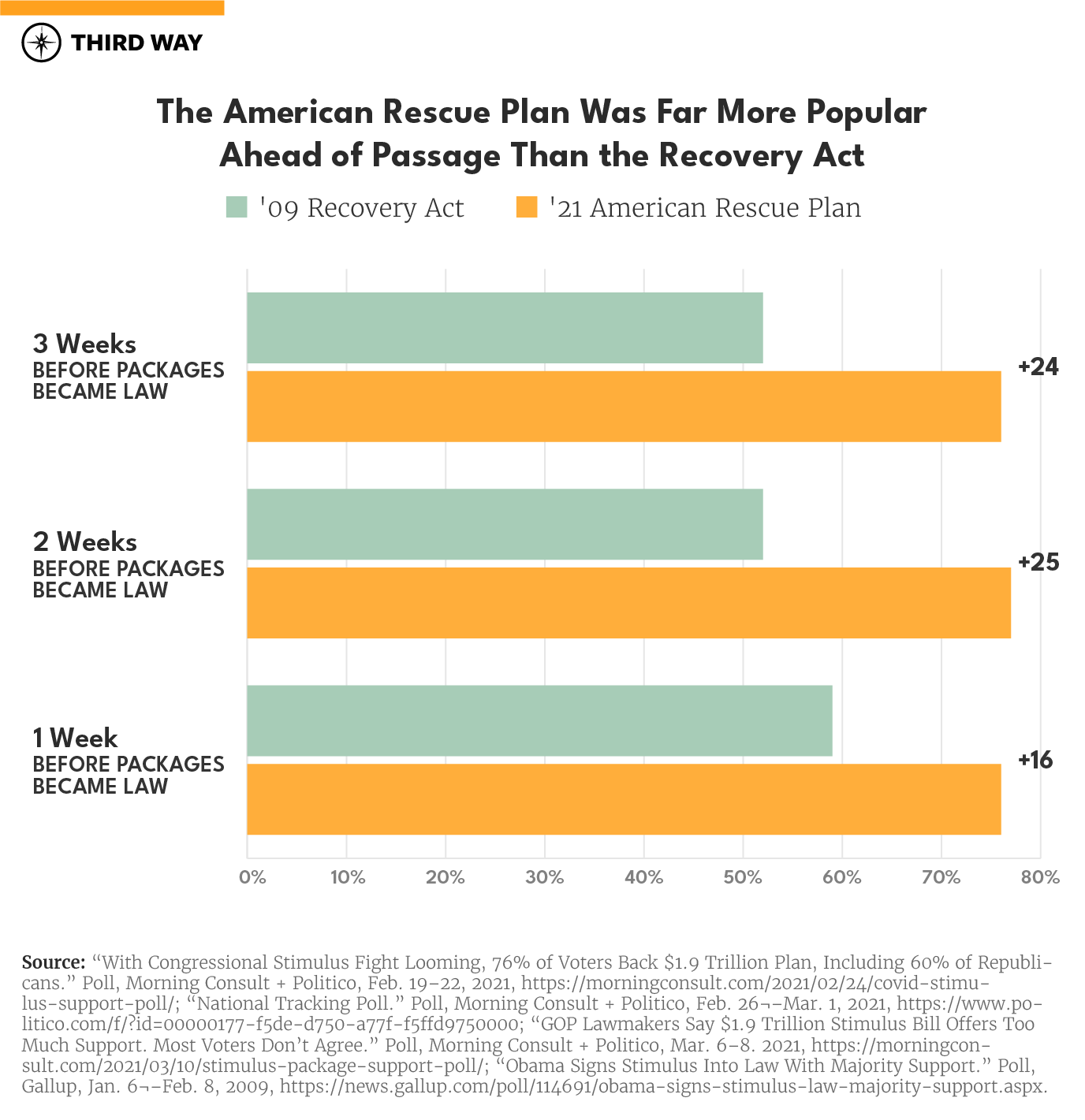 Democrats’ task now is to sell the American Rescue Plan.

The American Rescue Plan is impactful legislation that will help us turn the corner on COVID and rebuild our economy, and it is also incredibly popular with the American people. But Democrats should not forego an ambitious campaign to sell the benefits of the package to an American public eager for a return to normalcy and economic stability.

A campaign to sell the public on the American Rescue Plan is necessary because a good deal of the public does not know what is in it. A Morning Consult and Politico survey from after the plan became law found that 57% of voters had heard “a lot” about the $1,400 stimulus checks, but this share dropped to 24% for the $7.5 billion for vaccine distribution. Seventy percent supported $120 billion to help K–12 schools reopen safely, but just 19% had heard “a lot” about it. The public strongly supports well-known aspects of the plan, like the checks, but a public information campaign can help sell impactful but lesser-known components of the plan. And until the public is sold on the plan’s specifics, support for it is vulnerable to bad faith attacks and disinformation.

Thankfully, President Biden and Democrats have embraced a robust campaign to sell the public on the American Rescue Plan. By doing so they have rightly concluded that the plan is an opportunity to win voters over on the economy ahead of the midterms rather than a vulnerability that will weigh them down at the polls. This is a departure from 2009 when the hard work of passing the Recovery Act was not paired with an ambitious campaign to sell it. This time around, President Biden, the First Lady, and the vice president and second gentleman, have fanned out across the country to inform and sell the public on the plan. And state and federal Democrats are hard at work detailing for constituents precisely what it means for states and local communities.

Voters will judge President Biden and Democrats in upcoming elections on just how effective the American Rescue Plan was in curbing the pandemic and getting our economy back on track. Democrats took ownership of these challenges when they passed the $1.9 trillion plan. But this is an opportunity for Democrats to make gains with the public ahead of the midterms, rather than a vulnerability to overcome. That’s because the plan delivers for the American people and is overwhelmingly popular. This stands in contrast to the Recovery Act in 2009, which had delayed impact and never had support across partisan lines. But it’s incumbent on Democrats to sell the American Rescue Plan, so that voters know what it means for them and who deserves credit for it.