In 2020, the world invested a record $500 billion in the clean energy transition, including $85 billion in the United States.1 Although we are investing more in climate action than ever before, we are still a far cry from the scale of investment needed to meet our climate targets. To reach net-zero emissions by 2050, the United States will need to invest between $150-$797 billion annually.2 This will be a monumental effort that requires historic deployment of both public and private climate finance.

Enter the Clean Energy and Sustainability Accelerator, a new type of financial institution that invests in clean energy projects and makes them more attractive to other investors. Last week, Michigan Representative Debbie Dingell and Massachusetts Senator Ed Markey introduced the Clean Energy and Sustainability Accelerator Act.3 A growing number of stakeholders have embraced it, including labor unions, environmental organizations, state governments, utilities, and financial institutions.4 Polling indicates that about 7 in 10 Americans are supportive of the idea.5

Has the time come for the Accelerator? In this primer, we will outline the main features of the proposal and how it can help in our climate efforts.

The Clean Energy and Sustainability Accelerator 101

The Clean Energy and Sustainability Accelerator is a non-partisan, independent, nonprofit, financial organization. It has a mandate to make the United States “a world leader in combating climate change” through the rapid deployment of mature technologies and scaling of new technologies, prioritizing projects that maximize emissions reductions for every dollar deployed.

The Accelerator can directly invest in projects through several financial instruments, in most cases partnering with private capital providers.6 In other cases, the Accelerator will catalyze investments through various financial strategies like credit enhancement (including loan loss reserves and loan guarantees), aggregation and warehousing, and technical support.7 The Accelerator has a broad array of eligible investment categories including but not limited to: renewable energy generation, building efficiency and electrification, industrial decarbonization, electric grid technology, and clean transport.

As laid out in the legislation, the Accelerator has a 30-year charter to fulfill its mandate, and is initially capitalized at $50 billion, with an added $10 billion per year for its first 5 years. After this period, the Accelerator would receive no additional federal funds, instead relying on the return on its investments, and its own creditworthiness for additional borrowing.

Although the Accelerator receives its seed capital through federal appropriations, it is independent from the government. This is important to ensure independence from any political influence and execution of proper governance by the Accelerator’s management team and Board of Directors. However, the federal government will provide some oversight functions, most notably:

The Accelerator will have enough resources to invest in a portfolio of large regional and national projects, but it can also support smaller, local projects. This is because the Accelerator will interface with a large and growing network of “green banks”. Today, there are 20 state and local green banks in the United States (Figure 1).8 The Accelerator will invest in them, taking advantage of their “on the ground” experience and local expertise. This support will not be limited to the select states that already have green banks, as it will also provide technical assistance and/or start-up funding to states that do not yet have green banks, working with relevant stakeholders in those localities to establish an institution that is adequate to local needs. 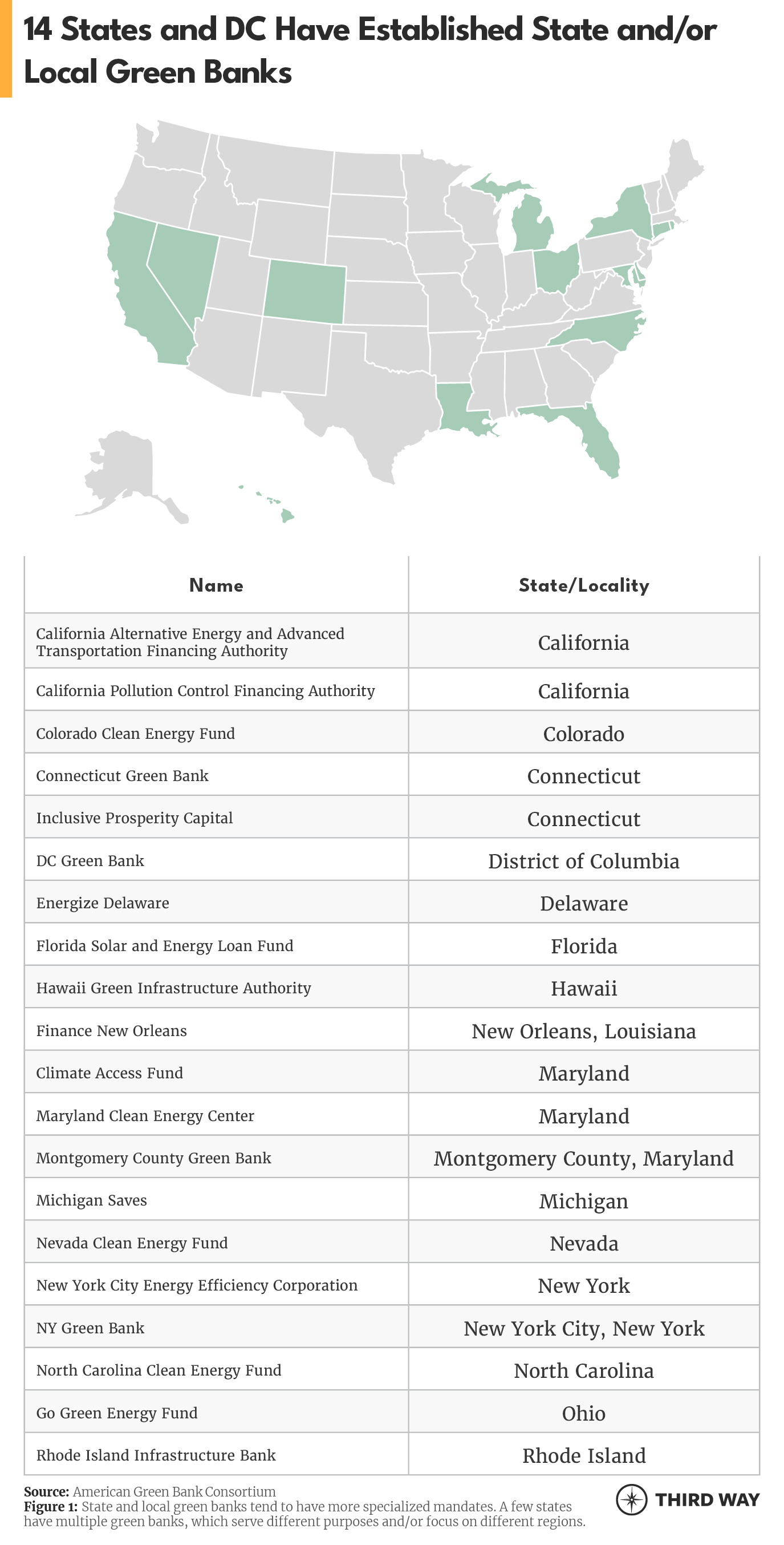 Another crucial feature of the Accelerator is that, in addition to its mandate to maximize emission reductions, it must allocate a minimum of 40% of its investment activity to underserved communities. Because of this environmental justice mandate and the Accelerator’s nonprofit status, investments in these communities could take the form of grants or subsidies should the Accelerator’s leadership choose to do so.9 In the same vein, the Accelerator has labor standards, including a requirement for project labor agreements for all investments of $100,000 or more, and a requirement to pay laborers and mechanics at least prevailing wage for all projects.

Why do we need an Accelerator in our low interest rate world?

With capital at record low costs, and no indication that interest rates will rise in coming years, it is easy to downplay the need for the Accelerator.10 Indeed, the fundamentals for the clean energy industry have come a long way since the last recession, when solar energy and electric vehicle technology were not the major players they are today. But there are several reasons why we still need additional climate finance solutions in our low interest rate world—the first of which explains why conventional institutions underinvest in climate.

The fact that capital is affordable does not mean all investment-worthy clean energy technologies have access to it, or that it will get deployed at the rates we need. In some cases, this is because many clean energy industries lack the large firms with high credit ratings that can take advantage of low interest rates. In other cases, clean energy projects will not be financed because they need small amounts of de-risking to be attractive to investors, or because they have social benefits that capital providers do not fully value. This could include infrastructure investments which have widely spread economic benefits, or investments in less prosperous, underserved communities.

To this effect, the Accelerator will operate in a similar way to development banks. It identifies projects with climate benefits, supplements what the private markets will support, and fills the gaps in areas where private funding costs are too high. It also addresses barriers which keep otherwise attractive projects from raising capital. For instance, the Accelerator can aggregate rooftop solar projects which are too small to be individually attractive for investors and promote them as a single investment. Or it can provide loan guarantees to de-risk clean energy projects that are reliably profitable, but investors may not be familiar enough with. This is how the Accelerator draws in private investors (the “crowd in” effect), instead of competing with them for projects in which they are already investing.

State and local green banks have already been doing this since 2011, when Connecticut established the nation’s first state green bank. By the end of 2019, state and local green banks had deployed a total of $5.3 billion in clean energy projects (Figure 2), of which a majority has been private co-financing (Figure 3). Because of their ability to leverage private capital, green banks have mobilized 3.6 dollars for every dollar invested in them, financing thousands of emissions-reducing projects that might otherwise not have received the support they needed.11 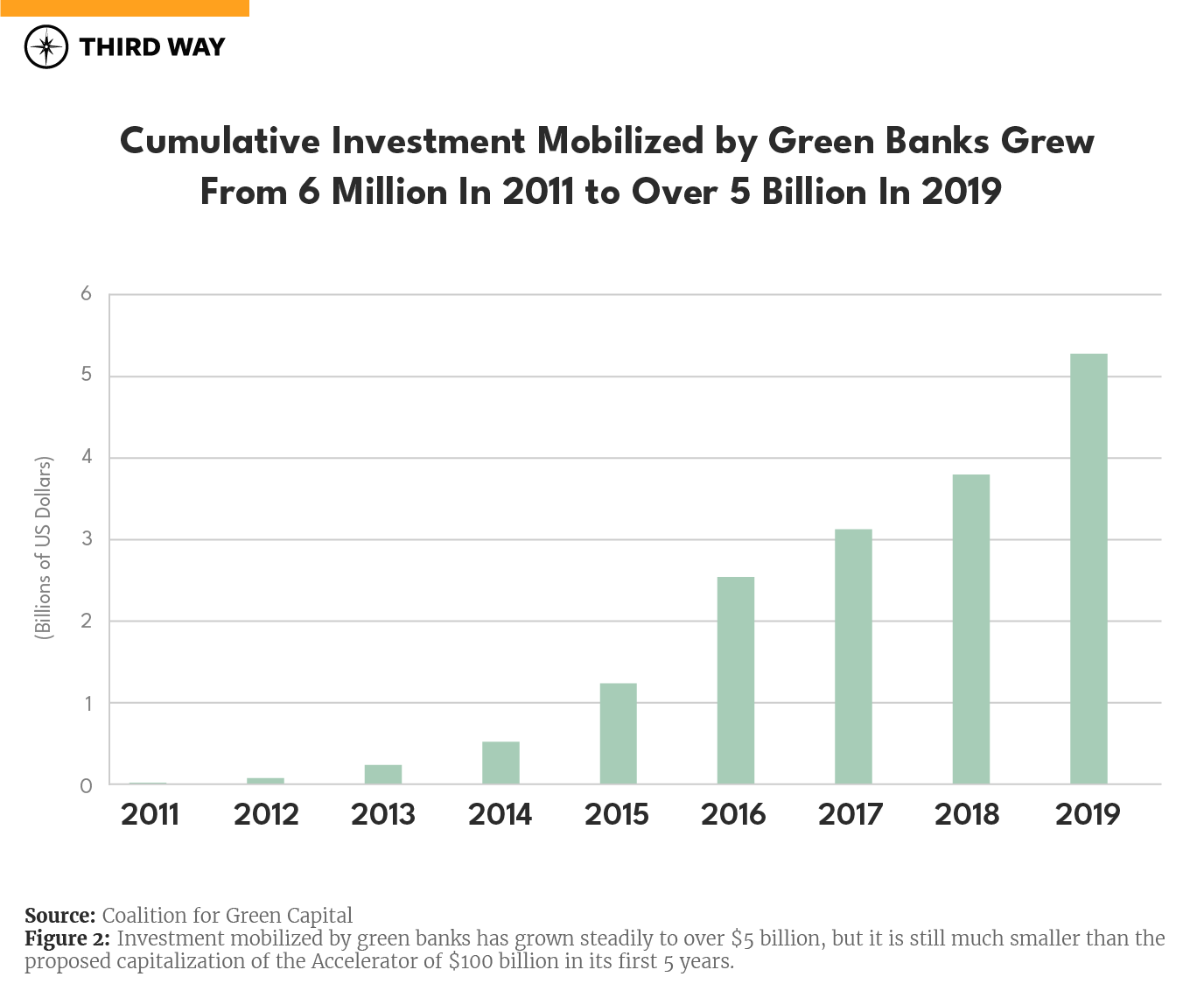 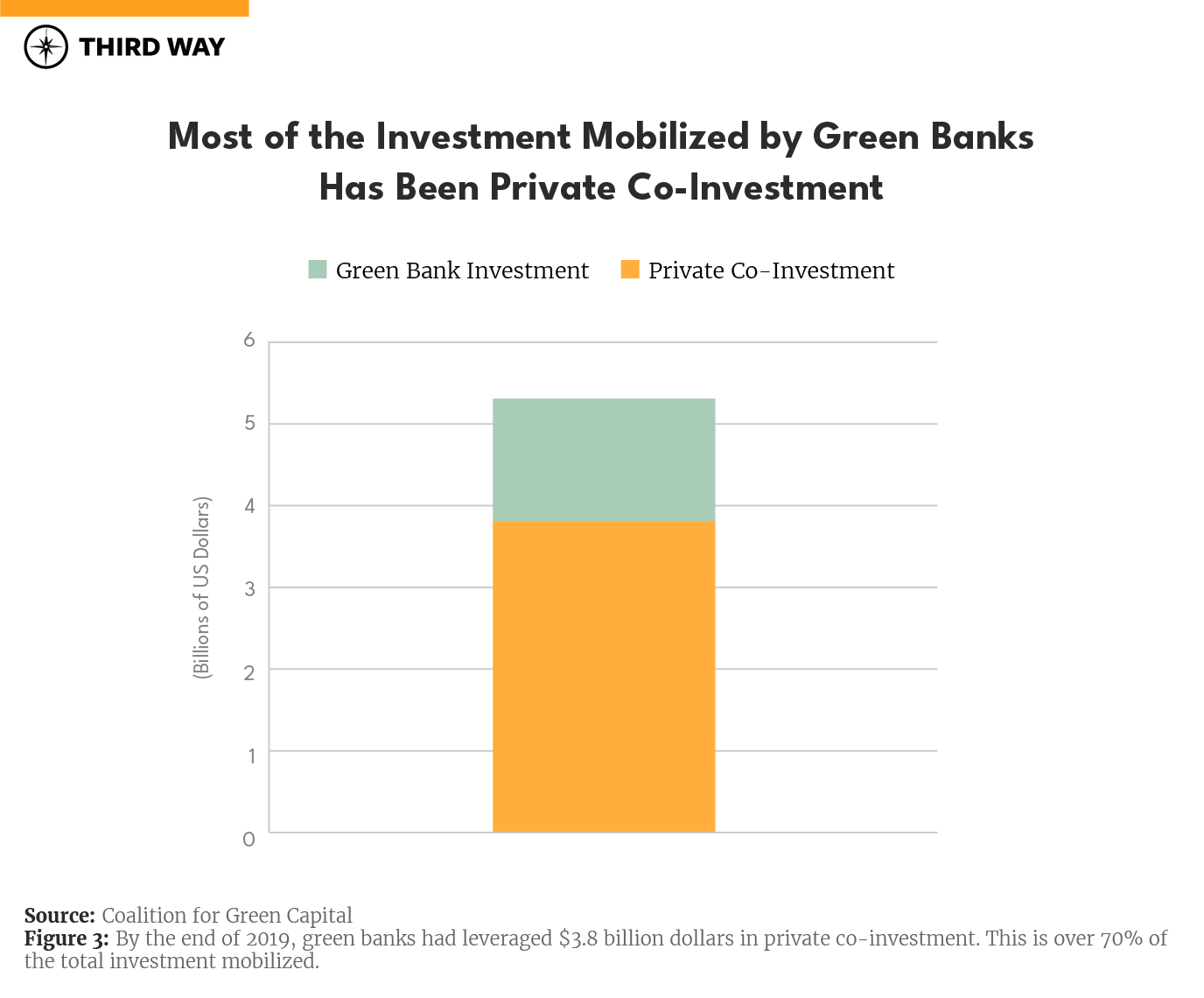 In addition to spurring the deployment of mature technologies, the Accelerator can enhance the competitiveness of clean energy providers and technologies which have yet to truly break into the industry. It can do this in at least two crucial ways. First, the Accelerator provides capital for clean energy firms that have not yet achieved required economies of scale, allowing them to grow until conventional capital providers are interested in financing them on their own. Secondly, it serves to demonstrate to other financial institutions how profitable emerging clean energy projects and technologies can be in new markets, improving their perceived risk profile.

Finally, the Accelerator can provide much needed near-term stimulus for the economy. Recent jobs figures reinforce many economists’ fears—that the job recovery we saw in the summer of 2020 has come to a halt. With few economic policy tools left to fight the recession and unemployment, mobilizing public and private capital to projects with high multiplier effects and that can increase future productivity is both good economics and good politics.

The Accelerator’s biggest hurdles to success

The broad appeal of the Accelerator means that policymakers have incorporated feedback from many stakeholders, resulting in a more complex proposal with multiple goals and constraints.

The Accelerator must consider many different priorities, including its own financial sustainability, the emissions reduction mandate, its goal of leveraging private capital, the environmental justice mandate, and capitalization for smaller green banks. It will have to find the economic “sweet spot” of clean energy projects where private capital is somewhat interested but still hesitant to commit resources due to specific financial or institutional barriers (and this “sweet spot” is a moving target as climate finance and clean energy industries have changed dramatically over time and will continue to do so).  The Accelerator will have to pursue all these objectives with its limited seed capital of $100 billion over its first 5 years, not to mention the pressure to provide jobs as soon as possible.

Although these challenges may seem daunting, addressing them boils down to the quality of staffing and governance of the Accelerator. Institutional design that includes strong research capabilities, financial and energy industry expertise, high transparency standards, and quality metrics and evaluation methods to compare investments across different policy goals will be crucial for success.

There is no doubt that there is a pool of talented climate finance professionals capable of addressing these issues. Still, it is important to stress that this would be the first national entity of its kind in the country. Policymakers who support the Accelerator should not be dissuaded by this but should be mindful of the importance of hitting the ground running, as well as the risk of a delay in the near-term job potential of the policy in order to get its design right.

What’s next for the Accelerator?

The Accelerator was introduced in the House and Senate on several occasions during the 116th Congress and passed in the House twice as part of larger climate bills (The Moving Forward Act H.R. 2, and the Clean Energy Jobs and Innovation Act H.R. 4447). But it has yet to become a law.

Now Rep. Dingell and Sen. Markey have re-introduced their companion bills in a more favorable political context. Democrats now control both Chambers of Congress. And in his “Build Back Better” plan, then candidate Joe Biden called for “innovative financing mechanisms that leverage private sector dollars to maximize investment in the clean energy revolution,” which fits the description of the Accelerator nicely. Vice President Kamala Harris is also a supporter, having cosponsored a previous iteration of Senator Markey’s bill.

The Accelerator is an innovative solution that provides low-cost capital and catalyzes investments to deploy clean energy at the rate and scale needed to meet our climate goals. State green banks are already demonstrating their ability to mobilize public and private capital to this aim. Although there will be challenges in determining the leadership and internal governance of the institution, the Accelerator offers an opportunity to scale up the success of green banks to a national scale. And with the economy still deeply scarred from the pandemic and double-digit unemployment, it makes more sense than ever to invest heavily in clean energy to create high-quality jobs, increase American competitiveness, and support those on the frontlines of the climate crisis.