After a devastating loss in November, progressives are desperate to find the one silver bullet that can return them to Congressional majorities and the White House. Some have suggested that all Democrats need to do is coalesce the support of so-called “Romney-Clinton voters”—Americans who voted for both Mitt Romney in 2012 and Hillary Clinton in 2016. The appeal of this strategy is that it theoretically would allow Democrats to win back the House in 2018 without having to win a single Trump voter—so long as they simply turnout their 2016 voters, including the “new” Romney-Clinton ones. The same logic goes for winning statewide to take back the Senate, and for winning the White House in 2020: woo the Clinton voters plus a few who didn’t turn out in 2016, and you can avoid the Trump voters altogether. But there is no one kind of voter or one type of district that can dig the Party out of its current hole. And focusing only on Romney-Clinton voters wouldn’t just be an overly narrow path—it would be a losing one, given their limited numbers, the states in which they live, and their seeming resistance to vote Democratic when the Republican opponent isn’t Donald Trump.

Romney-Clinton voters are one of 2016’s smallest voter groups.

Let’s begin at the beginning. How many Romney-Clinton voters are really out there? John Sides has partnered with the Democracy Fund to create one of the most comprehensive post-election studies featuring data on 2012 and 2016 vote preference: the Voter Study Group.1 Based on Sides’ analysis, there are approximately six million people who voted for both Barack Obama in 2012 and Donald Trump in 2016—these folks are commonly referred to as “Obama-Trump voters.” And while this cohort has been the subject of much journalistic interest since the election, some on the left have given up on them altogether. Rather, they think that wooing the around three million Romney-Clinton voters is an easier path to Democrats winning back the House in 2018. But the truth of the matter is that the numbers don’t add up—there simply aren’t enough of those voters for Democrats to make them their whole strategy.

Romney-Clinton voters only made up 2% of the 2016 electorate—just half of the number of Obama-Trump voters that Democrats lost last year. Only 5% of Romney voters voted for Clinton, while 9% of Obama voters cast their ballots for Trump. In fact, Clinton got over twice as many of her votes from first time voters—who went for her 57% to 38% and made up 10% of the electorate—as she did from Romney-Clinton voters.2 And by definition, winning all of the Romney-Clinton voters won’t deliver the presidency (just ask Hillary Clinton).

Breakdown of the 2016 Presidential Electorate 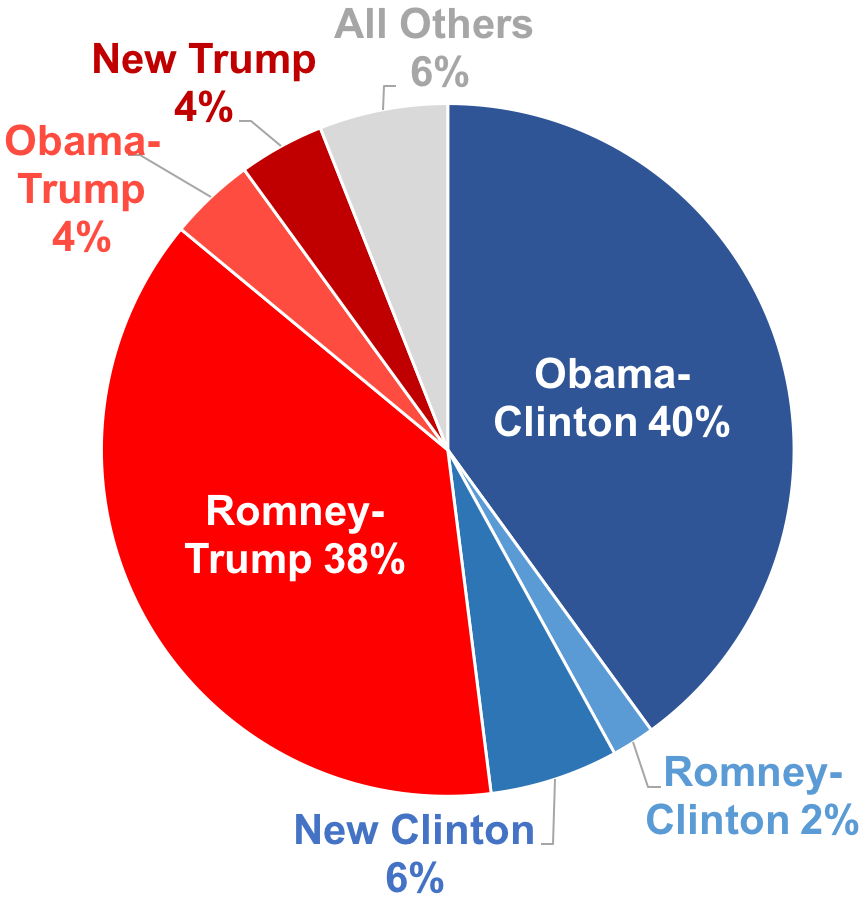 Refusing to fight for Obama-Trump voters and focusing only on Romney-Clinton voters is too narrow a path to bring Democrats to victory. There just aren’t enough Romney-Clinton voters to make the winning difference alone—even without considering the very real implications of where they live.

Most Romney-Clinton voters don’t live in swing states that can deliver the Presidency or Senate.

It’s not just their limited numbers—another big reason Romney-Clinton voters aren’t a quick-fix for the left is that the Obama-Trump voters Democrats lost in 2016 are much more likely to live in swing states than the Romney-Clinton voters they picked up. Obama won the national popular vote by 7.2% in 2008 and by a narrower 3.9% in 2012. Between those two elections, 32 Congressional districts switched partisan presidential voting preference, meaning the district was won by a presidential candidate from one party in one election but by the candidate from the other party in the next.3 Unsurprisingly, all but one of those districts moved to the right, switching from supporting Obama in 2008 to Romney in 2012.

Last November saw a further erosion of the Democratic popular vote lead, shrinking from Obama’s 3.9% margin in 2012 to 2.1% for Clinton. From 2012 to 2016, 36 congressional districts switched partisan presidential voting preference, with 21 going from supporting Obama to supporting Trump and 15 switching from supporting Romney to backing Clinton.4 This type of two-way traffic occurs much less commonly. No one talked about Kerry-McCain districts after 2008 or McCain-Obama districts after 2012 because so few individual voters flipped that way, and they were certainly not so geographically concentrated as to switch the affiliation of more than a dozen Congressional districts.5

Yet importantly, the districts that switched from supporting Obama in 2012 to supporting Trump in 2016 were in especially advantageous places with regards to the Electoral College. Six of the Obama-Trump districts were in states (or in Maine’s unique case, districts) that awarded their electoral votes to Barack Obama in 2012 but Donald Trump in 2016.6 Another five of the 21 districts were located in the swingy states of Minnesota, Nevada, and New Hampshire.7 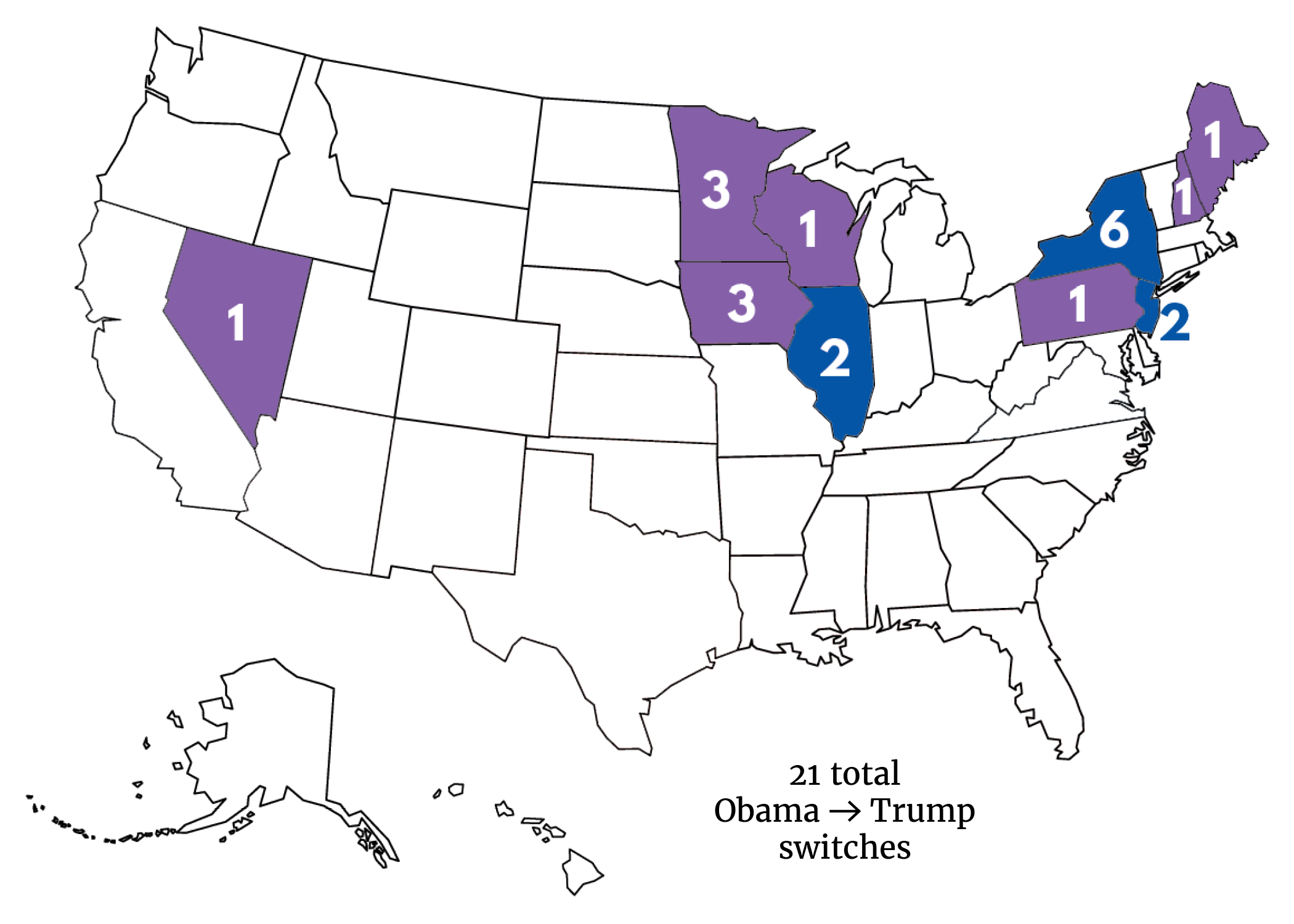 But as the map below illustrates, the same was not true for most of the districts that supported Romney in 2012 and Clinton in 2016. Seven of the 15 Romney-Clinton districts were located in the safe blue states of California, Illinois, and New Jersey. And while it’s certainly notable that Clinton won over California’s usually conservative Orange County, doing so didn’t help her electoral vote count. Nor did turning four districts blue in the deep red states of Texas and Kansas, though that they flipped at all is in itself an important victory. In all, only four of the Romney-Clinton districts were located in swing states whose electoral votes were up for grabs. And two of those were actually in Pennsylvania, a state that Clinton went on to lose anyway (improvements in those two Philadelphia suburban districts could not make up the massive amount of ground she lost in other parts of the state). 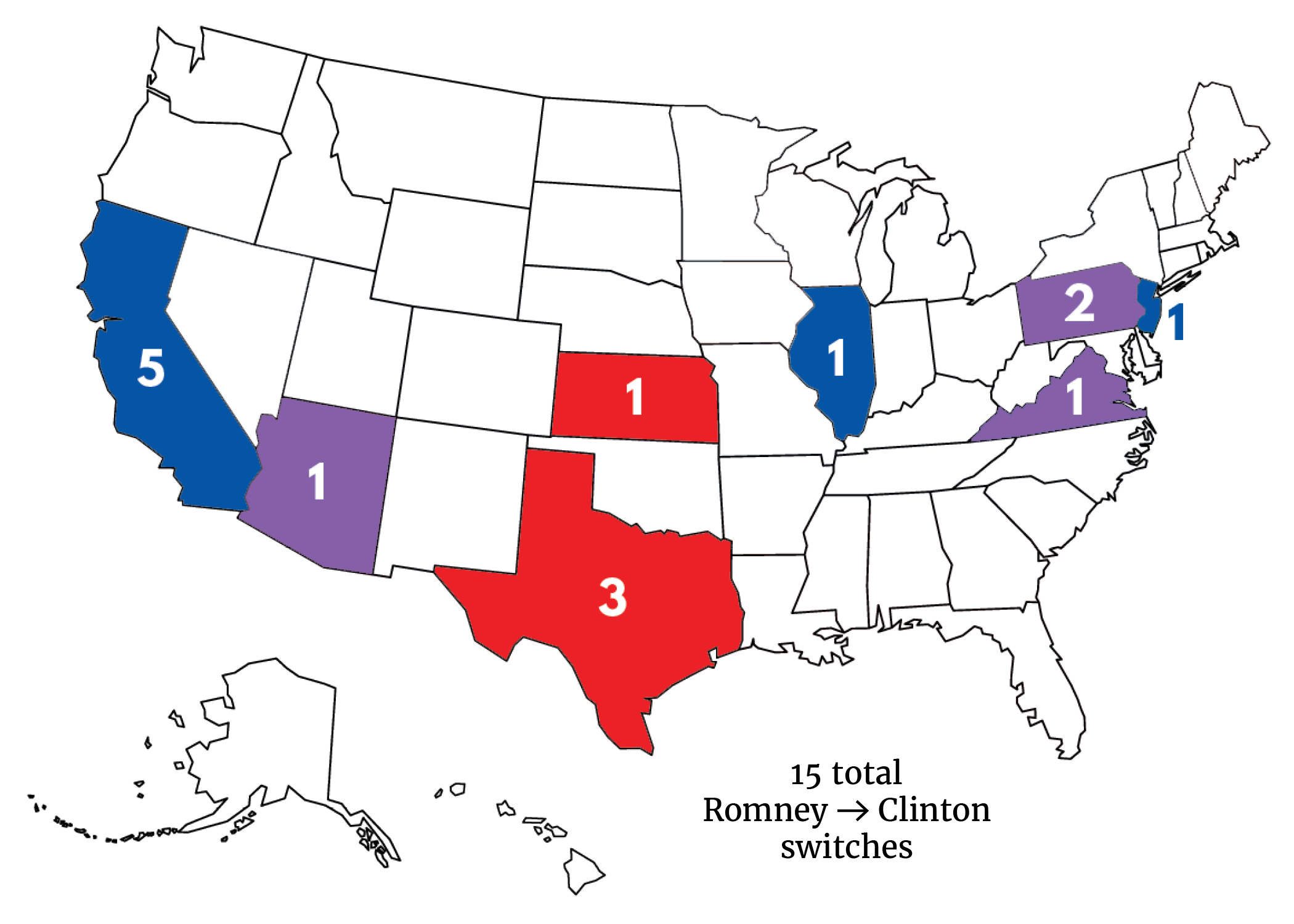 What too many people forget in their fervor to attract Romney-Clinton voters to Democrats in 2018 and beyond is that all 15 Romney-Clinton districts are currently represented by a Republican in Congress. As shown in the graph below, all 15 House Republicans outperformed Trump in these districts, and only four of the 15 Republican incumbents were held to a single digit victory in 2016.8 This points to the fact that many of these Romney-Clinton voters probably kept their previous Republican allegiance when it came to down-ticket races—which means they’d need to do an about face in 2018. (By contrast, the 21 Obama-Trump districts are fairly evenly split, with 12 Republicans and nine Democrats representing them in Congress.)

There is further evidence of this loyalty to Congressional Republicans in the 2016 exit polls. Those who voted for a Democrat for Congress voted for Clinton by an 85% margin, while voters who picked a Congressional Republican candidate only went for Trump by a 79% margin.9 While this six percent difference might sound small, the divergence was only 2 percent in 2012.10 For many Romney-Clinton voters, this might have been a situation in which they were not comfortable voting for Trump but will otherwise remain reliable Republican voters, which means Democrats should not count on them to necessarily be part of a winning coalition to build a House majority. 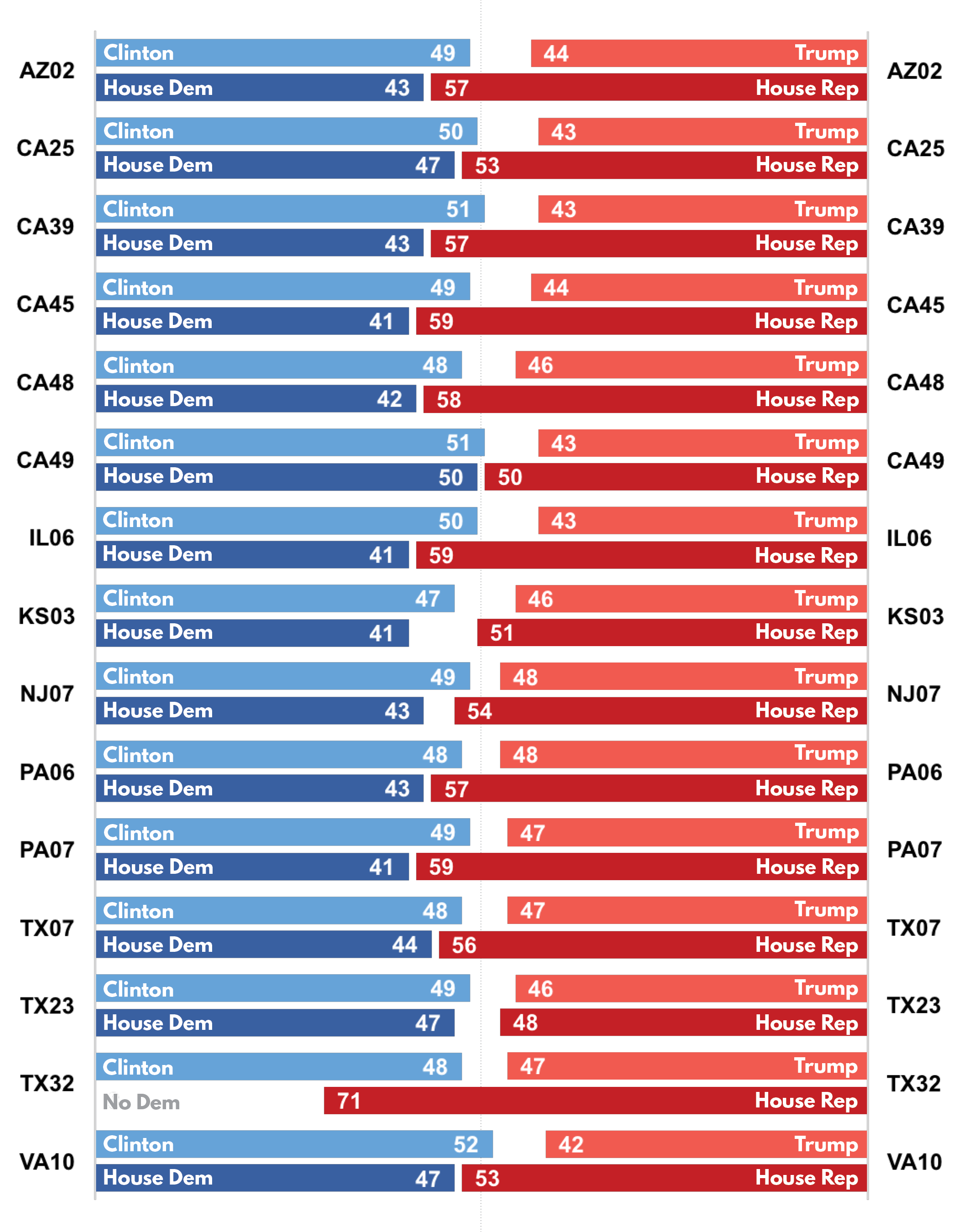 Democrats are going to need a broad path strategy to win back power in Washington. Romney-Clinton voters should be a part of that—but on their own they simply aren’t sufficient. They will be a necessary component of Democrats’ efforts to win back the House in 2018, but for state-wide elections—like for Senate or President—there simply aren’t enough of them to serve as the springboard for long-term electoral success. They can’t replace the Obama-Trump voters lost in 2016, and their geographic spread isn’t conducive to winning the Electoral College. Democrats also must contend with the fact that many of them might simply not want to join the party long term. When dealing with using limited resources for targeting, Romney-Clinton voters might simply be too difficult to flip compared to the prospect of turning out new and infrequent voters who naturally lean heavily Democratic, like the first time voters discussed above. Romney-Clinton voters may be a key part of the puzzle for Democrats, but they aren’t the silver bullet many on the left hope they will be.