Public Opinion and Narrowing the Security Gap in 2016

Want to know who will win on Election Day? Look at how Americans perceive which party is better able to protect the nation from foreign threats and acts of terror. The so-called “security gap” is a key indicator about how the two major parties will perform when Americans head to the voting booths. Gallup asks Americans this question every September, and we’ve been hard at work here at Third ay to make sense of the “security gap” since our founding in 2005.

This September, Gallup announced the results of the 2016 survey and found that the Security Gap had shrunk to seven points, with Republicans favored 47% to Democrats’ 40%. This is the same margin that Democrats faced in the 2008 election cycle, when President Barack Obama won a majority of the popular vote. 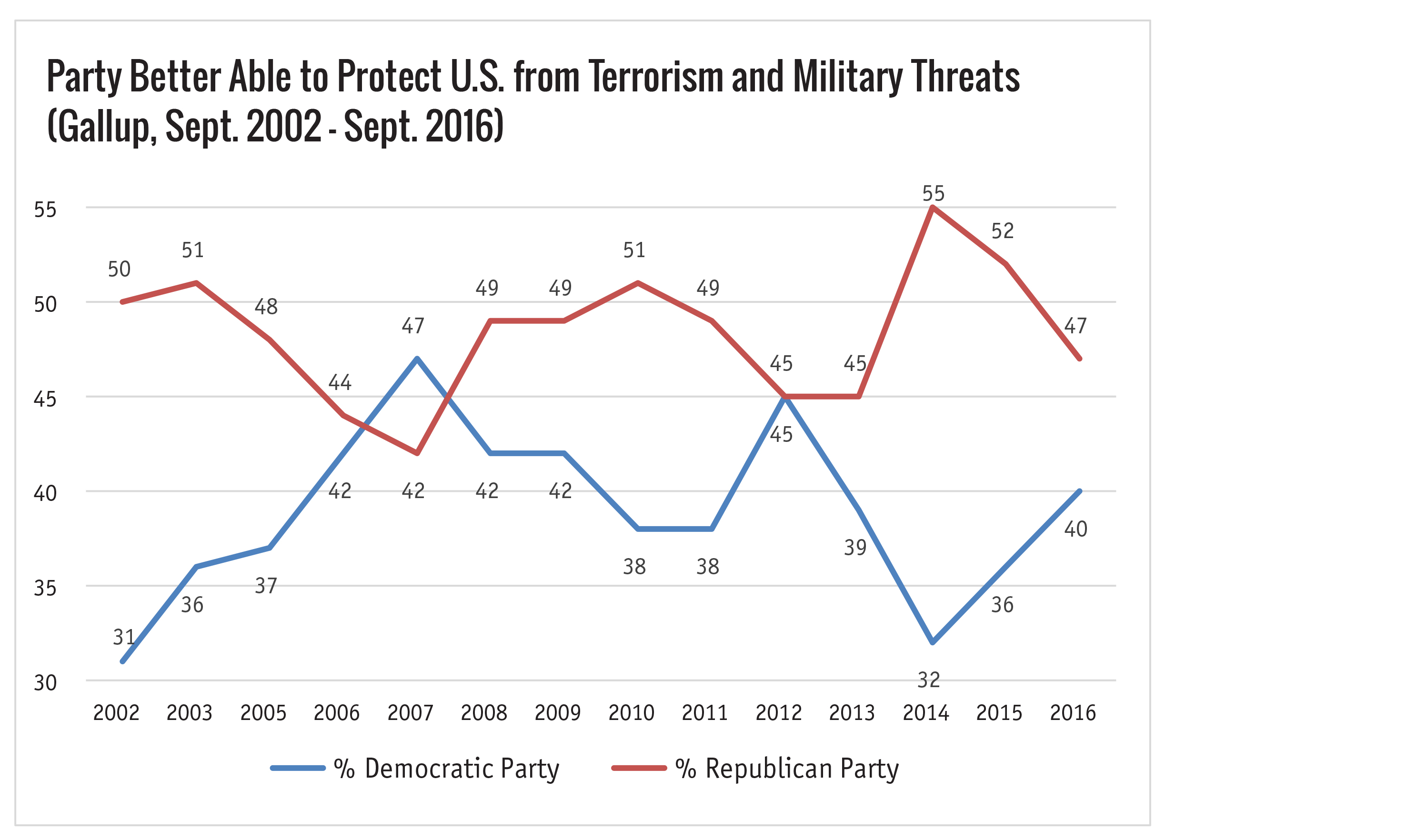 This shows that Democrats have worked to close the 23-point gap that existed in the 2014 cycle, for which they paid heavily in the electoral results, as documented in a Third Way report.  We would note that in this century, Democrats have never gained seats in the House when the security gap has been greater than seven points.

Beyond the overall security gap, there is other public opinion data of which policymakers should be aware before the election.

National Security is the Second-Most Important Issue to Voters

A Washington Post/ABC poll fielded September 5-8 asked voters what “is the single most important issue in your choice for President?”

Hillary Clinton’s double-digit lead over Donald Trump in head-to-head matchups following the conventions has shrunk in the last month.

However, Clinton remains ahead in a number of swing-states, including:

While Trump is closing the overall gap, he remains extremely vulnerable on personal traits.

Voters are very afraid, and don’t believe the government is doing enough. However, overall, they support democratic proposals.

A Pew poll conducted August 23 to September 2, found that 40% believe the ability of terrorists to launch an attack on the U.S. is greater now than it was on 9/11.

A Washington Post/ABC News poll from June 20-23 asked “How concerned are you about so-called 'lone-wolf' terrorist attacks in which individuals in this country decide to take terrorist action on their own.”

Voters are strongly in favor of banning gun sales to people on the no-fly list.

Russia May Not be a Vulnerability for Trump, but Putin is Very Unpopular

A Monmouth University poll fielded August 4-7 asked voters “Are you concerned or not concerned that Donald Trump would be too friendly toward Russia?”

However, a Bloomberg poll fielded August 5-8 asked voters if they had a favorable opinion of Russian President Vladimir Putin.

A CNN/ORC poll from July 29-31 asked respondents if they felt “the Russian government is attempting to influence the outcome of the U.S. presidential election.”

Growing Support for the Iran Deal; Divided over “Ransom” Payment

A Morning Consult poll fielded August 18-20 asked “As you may know, the United States and other countries have announced a deal to lift economic sanctions against Iran in exchange for Iran agreeing not to manufacture nuclear weapons. Do you support or oppose this agreement?”

The Morning Consult poll also asked, “As you may know, the United States agreed to pay $400 million dollars to Iran in the nuclear deal negotiated in 2015. The State Department has said that they made the previously negotiated payment to Iran, but only after Iran released several American prisoners. Based on what you know, do you support or oppose the United States making the payment to Iran only after securing the release of American prisoners?”

Americans Remain Opposed to Banning Muslims from Entering the U.S.

A variety of polls show Americans remain opposed to a ban, temporary or permanent, on Muslims entering the U.S. For example:

Refugees are welcomed by Americans:

Public Believes Clinton Hasn’t Been Honest About Her E-mail, Has Heard Enough About It

A Monmouth University poll from August 4-7 asked voters if, “Hillary Clinton has been or has not been honest about how she handled using a personal email account during her time as secretary of state?”

Similarly, a Morning Consult poll found that 62% believe Clinton’s e-mail use was “unethical,” compared to just 15% who believed it ethical.