President Biden Has Five Options for Future Negotiations with Iran

President Biden has announced plans to re-engage with Iran on the Joint Comprehensive Plan of Action (JCPOA), also known as the Iran Nuclear Deal. In this paper, we briefly outline the five most likely pathways ahead, each of which has strengths and challenges:

Each path carries risk and opportunity for restoring American leadership in the world, and congressional Democrats should remember the perfect deal does not exist. Members of Congress would be wise to measure the next deal against the status quo ante: an unconstrained, belligerent Iran again racing to a bomb.

The Joint Comprehensive Plan of Action - signed by the United States, Iran, and several other world powers – was intended to resolve the biggest problem threatening US interests and security in the Middle East: a nuclear-armed Iran. The deal, which prevented Iran’s pathway to a nuclear weapons program and paved the way for permanent international inspections on Iranian facilities in exchange for sanctions relief, was limited to Iran’s nuclear capabilities. But it was also intended as a possible foundation to address other important issues of concern to the US and our allies in the region, such as Iran’s sponsorship of terrorist activities. The fact that the deal was limited in scope and was negotiated and concluded without the knowledge of allies (Israel) and key players in the Middle East (notably Saudi Arabia) lent controversy to the deal from the start.

Most analysts believe that Iran complied with the nuclear deal when it went into force on July 14, 2015. President Donald Trump, however, accused Iran of violating the agreement, boasted that he could negotiate a better deal, and unilaterally pulled out of the Agreement in May 2018. Despite the pushback from some of President Trump’s advisors and all other parties of the deal, including our key allies in Europe, the Trump Administration reimposed sanctions on Iran’s energy, oil, and financial sectors.

Iran stayed in compliance with the Agreement for some time after US sanctions were reimposed but are now in breach of some key provisions.1 Iran’s lead negotiator of the original Agreement also rejected an offer to begin negotiations with the United States, citing recent “positions and actions” by the West.2

President Biden has announced he wants to re-engage with Iran.3 In this paper, we briefly outline the five most likely pathways ahead, each of which has strengths and challenges.

The Iran Deal was never the end but rather a means to the end.

Before President Obama signed the Joint Comprehensive Plan of Action (JCPOA), often referred to as the Iran Deal, Iran was only two to three months from acquiring a nuclear weapon.4 The requirements in the JCPOA were the most comprehensive inspection regime in the world and validated dismantling of its program for at least 15 years. At its core, the deal intended to solve the international community’s biggest problem: Iran’s nuclear weapons program. And for two years, experts broadly agree it worked. Inspectors from the International Atomic Energy Agency routinely found Iran in compliance with the obligations of the JCPOA.5

While the deal had limited Iran’s nuclear weapons program, Obama officials also hoped it would act as a springboard for other follow-on agreements to address Iran’s ballistic missile program, its regional adventurism, and other long-standing issues.6 Unfortunately, the mismatch of expectations resulted in an even more adventurist Iran unchained from a fledging secret nuclear program. Since January 2016, Iran has increased its disruptive role in the region by attempting to influence Iraq’s prime minister’s selection,7 fighting in Syria in support of the Assad regime, sending vastly more guided rockets to Hezbollah in Lebanon and providing it with more than $700 million per year,8 and repeatedly firing rockets and cruise missiles at Saudi oil refineries and other key facilities.9

Critics of the deal also pointed out that it included too many sunset provisions that could eventually renew some nuclear activity after 15 years, even though it had to permanently comply with comprehensive nuclear inspections and international monitoring.10 The deal also was negotiated in secret, upsetting our allies and strategic partners in the region who view Iran as an existential threat - deal or no deal.

Nonetheless, the Iran deal was successful for what it set out to do. It all but ended Iran’s active pursuit of nuclear weapons. When President Trump pulled out of the deal, he intimated the only acceptable outcome of the new approach was overthrowing the regime.

Instead of using the existing deal to push for follow-on agreements with allies on a range of issues, as National Security Advisor Jake Sullivan has discussed,11 Trump decided to scrap the agreement. Now, in addition to dealing with an adventurist Iran, President Biden must once again try to put Tehran’s nuclear program in a box.

Post-pullout, Iran’s nuclear program is advancing, sanctions are not deterring its nuclear ambitions, and allies are wary but ready to return to the negotiating table.

Just weeks before President Biden was sworn into office, Iran announced that it had increased its uranium enrichment levels to 20 percent, which broke the JCPOA’s limit of 4 to 5 percent and brought it just one technical step away from weapons-grade levels.12 The higher level of enrichment, authorized in the Iranian parliament, was the clearest sign that Iran is ready to disregard diplomacy and return to its dash for a bomb. 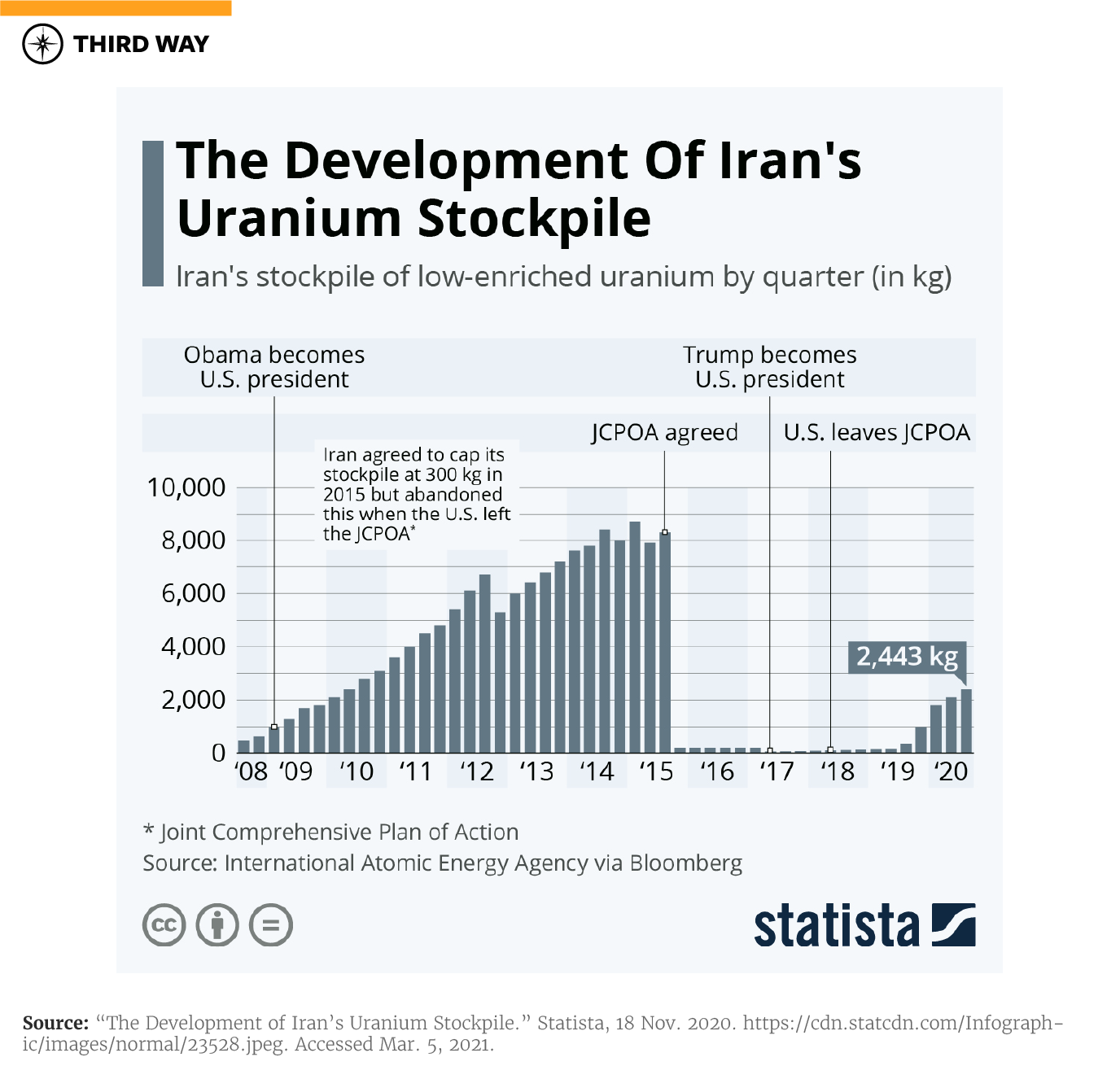 None of this was happening before President Trump reneged on the JCPOA without a viable path forward. Indeed, Trump’s maximum pressure campaign of unilateral sanctions, travel restrictions on senior Iranian diplomats, and high-level Iranian assassinations have complicated governing and stressed Iran’s economy. But, crucially, it has done nothing to stop Tehran from restarting its nuclear program, curtail its destabilizing behavior across the Middle East, and profoundly alienated our allies necessary for advancing our security objectives.

On top of Iranian actions that run counter to the JCPOA and sanctions that have not succeeded, US European allies are becoming impatient. On multiple occasions since Trump pulled the United States out of the JCPOA, Germany, France, and Britain (E3) have boldly pushed back on additional sanctions and scrambled to save the deal. Most notably, at a UN Security Council meeting in August 2020, almost all US allies in Europe abstained on a failed vote that would have indefinitely extended the UN arms embargo on Iran.13 And just days after the Trump Administration withdrew from the JCPOA, the E3 released a joint statement emphasizing their “continuing commitment to the JCPOA.”14 The European Union has also tried to make Washington and Tehran’s path back to the original deal more palatable by opting not to establish any preconditions for a return.15

On the other hand, US ally Israel and security partners such as Saudi Arabia, the United Arab Emirates, and others are worried about a JCPOA revival if it does not address their many legitimate concerns about Iran. The threat felt by Iranian militias and Tehran’s missiles and rockets did not dissipate with the signing of the nuclear deal, which many Middle Eastern governments felt was fundamentally flawed. The acute reaction to the deal and mutual anathema for Iran in Jerusalem, Riyadh, and Abu Dhabi gave Republicans and some Democrats in Congress the political space to oppose the deal during the Obama years and support Trump’s withdrawal.16

When negotiations restart between the P5+1 and Iran, the United States is expected to ensure Israel and Gulf nations are consulted and can provide input into the process. In 2015, when the Obama Administration negotiated and signed the JCPOA, nations in the Gulf and Israel felt blindsided. Iran’s regional ambitions threaten the security of many Middle Eastern nations, and ensuring US officials keep them aware of developments will be a vital step in garnering regional buy-in to any negotiated deal.

There are five scenarios for a future negotiation with Iran, ranging from scrapping the nuclear deal and focusing on deterrence to reentering the agreement and addressing regional activity and ballistic missile concerns. 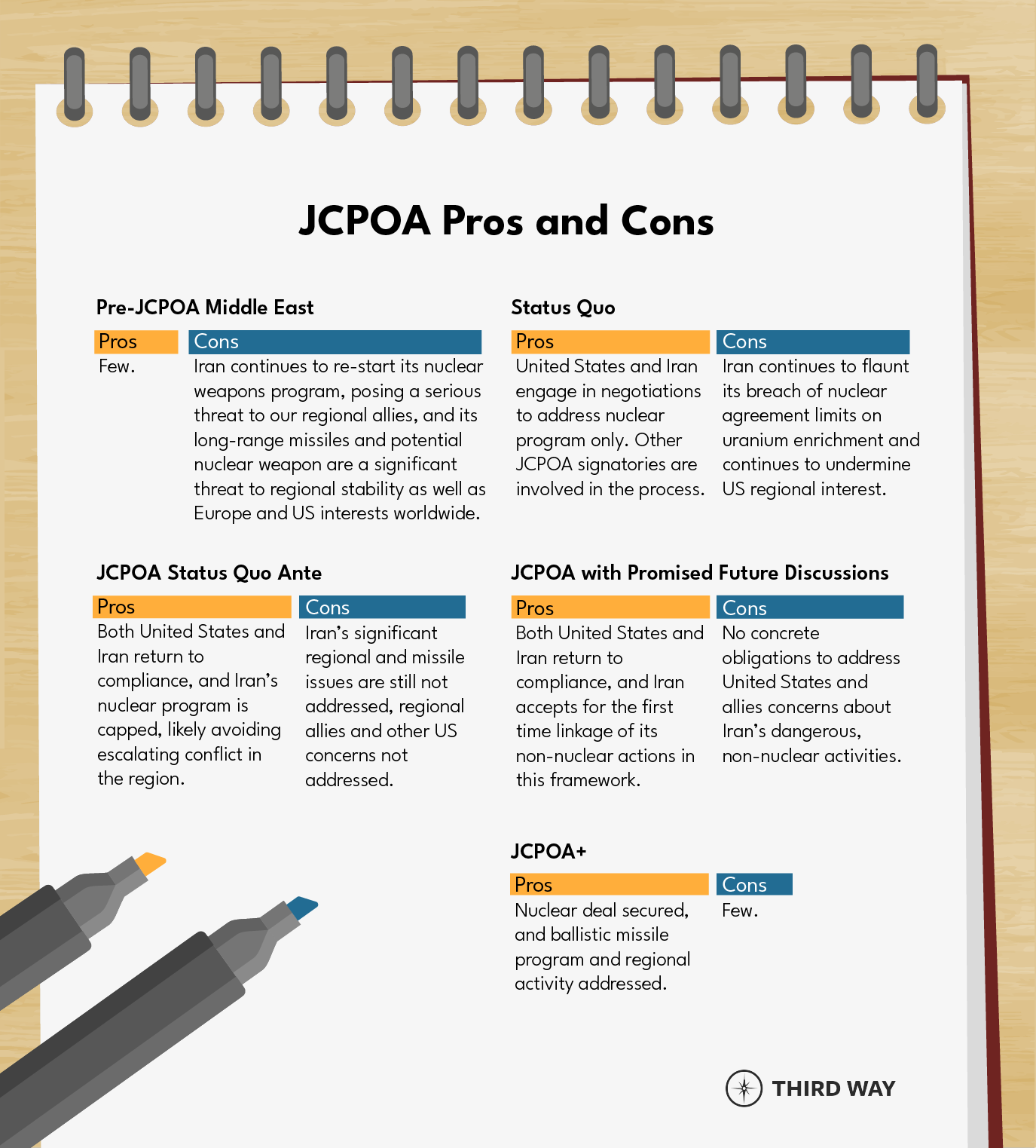 The Biden Administration has five scenarios for a future negotiation with Iran. The best outcome, reestablishing the JCPOA plus addressing regional activity and ballistic missile concerns, is also the most difficult to achieve. Iran has argued repeatedly that its ballistic missile program is non-negotiable.17 Nonetheless, it is the goal every US Administration should strive to reach.

The world is once again perilously close to staring down the possibility of a nuclear-armed Iran. Securing a new deal to limit Iran’s nuclear program plus follow-up negotiations for other issues is beneficial for several reasons, including a true rebalance towards Asia and a stronger transatlantic alliance after years of neglect.

The politics of a new Iran deal are also good for Democrats. When President Obama signed the JCPOA in 2015, a majority of Americans supported the deal,18 and three years later, over 60 percent believed Trump should stay in the JCPOA.19 More broadly, even after four years of Donald Trump’s “America first” policies, almost 70 percent of Americans believe it is in the best interest of the United States to remain active in world affairs.20

Still, Republican lawmakers are likely to reflexively oppose any Biden deal with Iran even though halting Iran’s nuclear program and striving toward more commitments would be a major accomplishment for American security. Ideally, all members of Congress should evaluate the merits of a new deal with Iran on six criteria:

And, most importantly, is an imperfect deal better than the alternative: an unconstrained Iran racing for a bomb.