We know that successfully vaccinating a majority of Americans against COVID-19 will have critical implications for our health and our eventual ability to return to a semblance of normalcy.  But probable 2020 general election voters have significant concerns about the safety of a COVID-19 vaccine, according to public opinion research from Third Way and ALG Research.

The results join a growing set of troubling opinion data that suggests we have a real problem in securing public confidence in a COVID-19 vaccine. The Food and Drug Administration, under a 2004 law, can emergency-authorize medical products that “may be effective.” Meanwhile, the Centers for Disease Control and Prevention (CDC) have told states to be ready to distribute a COVID-19 vaccine before clinical trials end and as soon as late October. That permission and timeline raise fears that the vaccine could be approved before it is deemed safe or effective—further shaking the public’s trust in the process. Former health officials and experts, including a vaccine developer, have already cautioned as much.

The poll was conducted among 800 likely November 2020 voters online from July 23-29, 2020, in seven battleground states, as part of a broader public opinion research project into Americans’ trust in science, whose full results are forthcoming. The survey followed a three-day, six-part virtual focus group conducted on QualBoard (more information is provided in the Methodology section).

President Donald Trump’s repeated derision of facts, science, and medical experts—even amid his own COVID-19 infection—has fueled massive uncertainty. Even Facebook and Twitter have had to take down or flag Trump’s COVID-19 posts as misinformation. Under the current administration, the CDC “is being challenged with partisan potshots, sowing confusion and mistrust at a time when the American people need leadership, expertise and clarity,” according to three former CDC directors and one acting director, from both parties. Seven former FDA commissioners have raised similar concerns.

With only half of Black Americans polled saying they would take the vaccine, work remains to be done to boost public confidence in vaccine trials and development. Amid this skepticism, however, Third Way finds that the CDC, Dr. Anthony Fauci, and others could play a pivotal role in increasing voters’ confidence that the COVID-19 vaccine works safely. Trump’s decision to sow doubts about the coronavirus—its virulence, its prevention, and its treatment—will require a concerted push from trusted messengers to encourage Americans to take the COVID-19 vaccine. Without it, they risk prolonging its spread. 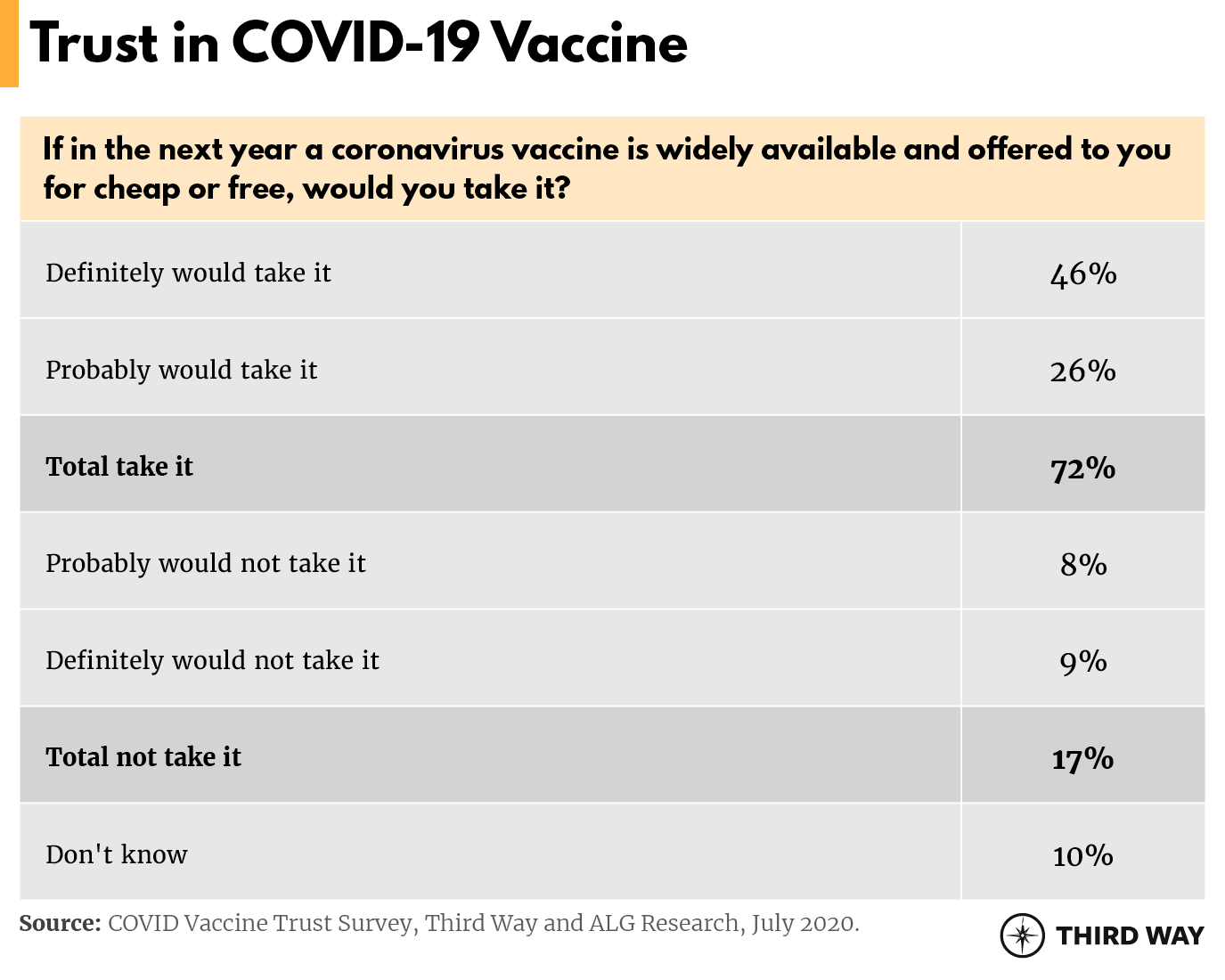 This is consistent with other recent polling, which has shown a precipitous drop in the number of US adults who intend to get a COVID-19 vaccine once it’s available, with less than a third (32%) answering in the affirmative, and more than half (51%) planning to get the vaccine after waiting to see what happens to others who take it.

In the QualBoard, many participants variously believed in the safety and efficacy of vaccines; said that new vaccines had been modified and weren't as good for the body; or raised the widely debunked concern that vaccines cause or are correlated with autism. Consistent with these sentiments, concerns over the vaccine’s safety, potential side effects, or potential to sicken were together far and away the most common concerns survey respondents expressed in open-ended responses (41%), including 51% of Black Americans and 53% of Latinos. Safety concerns trumped worries over its cost, efficacy, accessibility, rush to development, hesitancy at receiving an early vaccination, and others.

Several online focus group participants said their trust in vaccine researchers was unchanged in light of how scientists have handled coronavirus or weren’t sure. “However, if they rush a vaccine and start offering it to the public sooner than they should I will trust them way less,” caveated a Republican-leaning white female in Arizona aged 25-29.

Black Americans Have Less Trust in a COVID-19 Vaccine

Just 50% of the Black Americans we polled said they would be willing to take the vaccine—significantly lower than the 76% of whites and 74% of Latinos who said the same.

Black Americans have faced a grotesque history of inequities in health care and medical mistreatment, exemplified by the Tuskegee experiment, in which federal researchers misled and refused treatment to Black syphilis patients for decades. Structural racism is still prevalent in health care. For example, doctors overly misdiagnose Black patients and discount their pain, which weighs on their trust in the US medical system. In our online focus group, a Black woman in Georgia aged 25-29 said, “I have my own personal reservations about vaccines, especially when it comes to the mistreatment of African-Americans in health, science and medicine in general.” Another Black woman in Michigan, aged 60-64, said she takes what scientists say with some hesitancy, pointing to their use of unsuspecting Black Americans for scientific research.

Worryingly, people of color are also underrepresented in clinical trials for COVID-19 vaccines, likely due to a mix of insufficient outreach and mistrust in the trials—something Fauci has said needs improvement in order to increase confidence in the vaccine.

The share of white Democrats intending to take or probably take the vaccine stands much higher, at 88%, along with whites aged 65 and older (84%). Groups proportionally less likely to intend on taking it include Republicans at large (69%), voters under 35 (66%), and independents (64%).

The survey makes clear that it may be possible to boost public trust in a COVID-19 vaccine if certain messengers successfully convey its safety and effectiveness. Meanwhile, some messages may resonate more strongly with specific demographics.

For example, while the survey did not include the role of the FDA in approving vaccines, the poll shows that federal public health agencies hold sway with the public: Seventy-five percent of a split sample of respondents said they would definitely or probably get the vaccine if they heard a federal public health agency vouch for the safety and effectiveness of the vaccine based on rigorous standards. Among tested messages, this one appealed to the largest share of the respondents who said they’d only probably take the vaccine: 28% of those wavering said they would definitely take it upon hearing this kind of information. Fauci’s personal guarantee of its safety and efficacy similarly appealed to 20% of the probable vaccine takers, in another split sample.

But while the CDC and Fauci move hearts and minds, certain political figures may be less persuasive. Even if Trump and Vice President Joe Biden recommend that people take the vaccine, only 5% of waverers in a split sample said they would definitely get it based on that information. Comparably few waverers (9%) said they would take it if Trump, Biden, and former Presidents Barack Obama and George Bush all recommended it.

In the survey, voters responded most to an economic recovery rationale for taking the vaccine (28%), followed by one that focused on the general safety of any vaccine approval process (24%). The economic message appealed to white voters in particular (31%), while Black Americans agreed most with the safe process rationale (30%). Latino voters found the economic message equally salient with the notion that taking the vaccine makes one less likely to pass the virus onto a loved one (both at 27%). 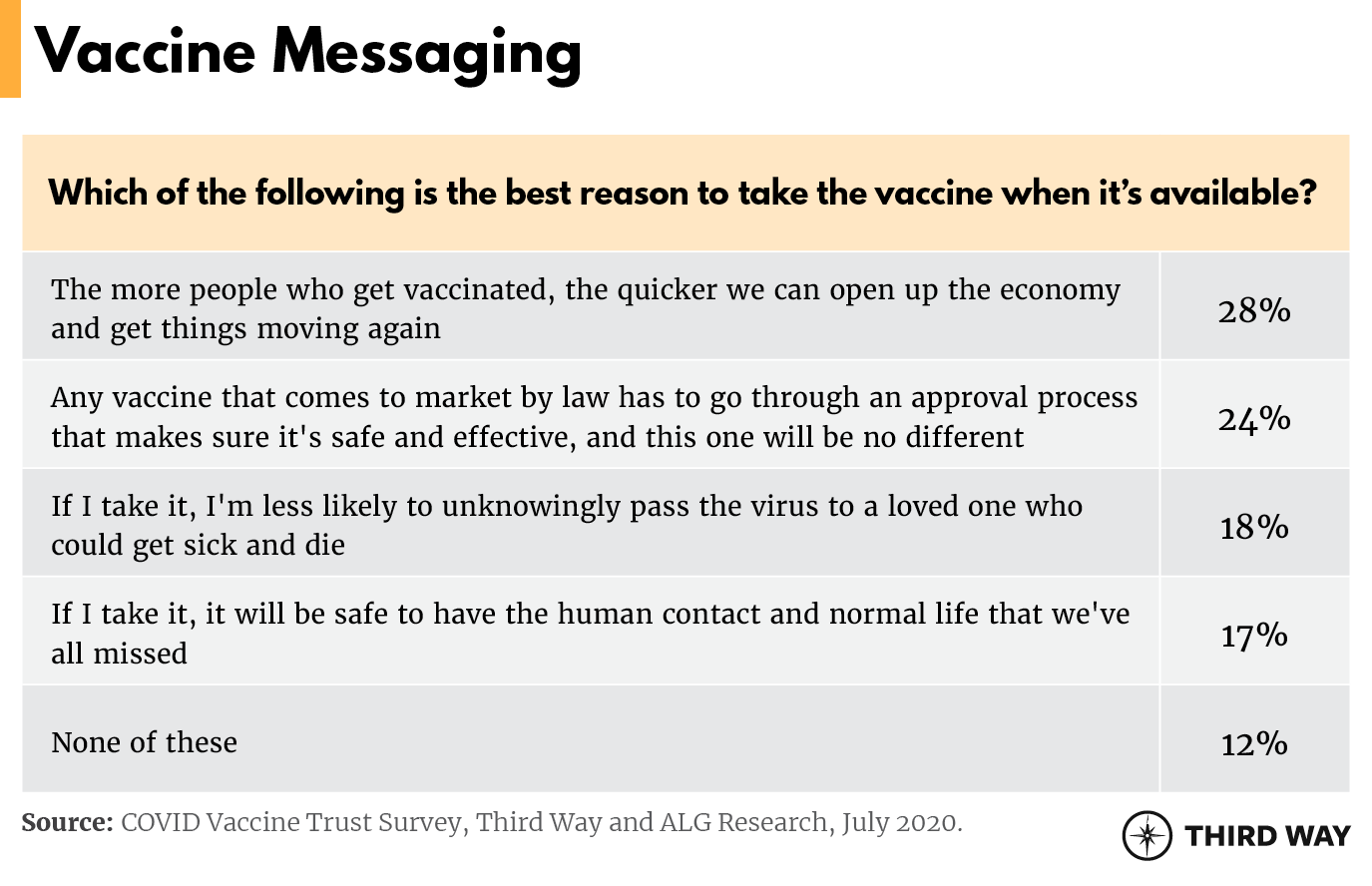 The second stage surveyed 800 likely November 2020 voters (those who said they were “almost certain” or “will probably” vote in the election) online from July 23-29, 2020, in the battleground states of Colorado, Florida, Georgia, Michigan, North Carolina, Pennsylvania, and Wisconsin, with a confidence interval of ±3.5% among the full group of respondents. Confidence intervals are larger for specific demographics. The online poll was conducted as part of a larger survey whose full results be released at a later date. The split samples referenced in the messaging section include half of the total respondents. All results are weighted to the likely 2020 voter population in the above states by age, gender, race, education, and other demographics.