Majority Makers is an ongoing series zeroing in on Congressional districts that have flipped since 2016. Some flipped in 2018 and have remained in Democrats’ column, some just flipped for the first time in 2020, and others flipped to Democrats in 2018 and back again to Republicans in November. By looking closely at these districts, we can better understand who gave Democrats their majorities and what they should prioritize to deliver on their promises and build on their strengths in the midterms.

The first installment in our series looked at Georgia’s 6th district, a suburban district outside Atlanta that transformed from a Republican stronghold to a Democratic district. For this second installment, we look at a district that tells a somewhat more complicated story: Michigan’s 8th Congressional District.

Michigan’s 8th district stretches from suburban and exurban communities outside of Detroit, westward all the way to Lansing and East Lansing. This district had been represented by a Republican in Congress for nearly two decades, and favored Republicans at the presidential level in 2012 and 2016. But it flipped in 2018 as Democrat Elissa Slotkin won the district’s Congressional seat, and Gretchen Whitmer carried the district in the gubernatorial race. Despite Democratic hopes that the district would remain in Democrats’ column, it delivered a split result in 2020: Slotkin won her reelection by just under four points, but both Joe Biden and Senator Gary Peters lost here (while winning statewide). Looking closely at the district—and at Slotkin’s race in particular—can help us understand why the district simultaneously slipped from statewide Democrats’ grip and why Slotkin was able to overperform and win reelection in this traditionally red district.

Michigan’s 8th district looked like a classic story of the suburbs in the Trump era. George W. Bush won it in 2000 and 2004 before it flipped to Barack Obama in 2008. It slipped from Democrats again in 2012, as Mitt Romney carried the district, and in 2016, as Trump won the district by a sizeable seven-point margin. At the congressional level, Debbie Stabenow held the seat in the late 1990s, and Republicans then held the seat for the next 18 years. But in electing Democrat Elissa Slotkin in 2018, it exemplified suburban voters’ rejection of the Republican Party under Trump.

Covering about 100 miles in southern and southeastern Michigan, Michigan’s 8th district is made up of suburban counties, including all of Ingham and Livingston counties and the northern portion of Oakland County. Ingham and Oakland Counties typically vote Democratic; Ingham County encompasses Lansing, Michigan’s state capital, as well as East Lansing, home to Michigan State University, and Oakland County covers the wealthy, majority-white but also majority-Democratic hub of suburban Detroit. Livingston County, on the other hand, is a vast stretch of affluent suburbs and exurbs that are largely white, religious, and conservative. While the 8th district itself is a swing district, the counties within it typically do not swing between Democratic and Republican support—though changing margins have driven swings districtwide.

A large majority of the 8th district is white, and the district is both wealthier and more college-educated than the country as a whole. That does not mean the district is homogenous; the median income in Ingham County is below the national average, and its racial makeup is less white than Michigan as a whole. But districtwide, over 90% of the population is non-Hispanic white, and its median income exceeds the national average, as does its educational attainment.

It makes sense that Democrats have seen some positive momentum here since 2016. With its high educational attainment, the district has a large swath of those college-educated white suburban women who have swung towards Democrats and become a key component of the party’s coalition during the Trump era. As the district’s split results in 2020 show, voters here are not completely sold on Democrats. This raises important questions. Why did this district, unlike other suburban districts with high educational attainment, continue backing Trump? Also, how was Slotkin able to overcome the partisan lean of the district even while Biden lost it? And how might Democrats stand a chance here in the future up and down the ballot?

The district’s voting patterns highlight Democrats’ newfound strength with white college-educated women and their enduring strength with Black voters and young voters. But it also brings out Democrats’ continuing weakness with exurban voters outside of the biggest suburban cores. Because Slotkin has been able to continue winning in the district, we can glean some idea of what might resonate here as Democrats try to expand their reach outside of cities and the most populous suburban areas.

The demographic makeup of the 8th district helps explain its recent political evolution and why it had a split result in 2020. The big story of the past two election cycles was college-educated women trending towards Democrats, and this group is a particularly significant bloc in this district. But large, exurban swaths of the district remain lily-white, and Democrats continue to struggle in these areas.

The district is majority-white and highly educated, at about 16 percentage points more college-educated than the state of Michigan and 13 points more so than the country. The district is also relatively affluent, with a median household income of $72,654, about 20% higher than the national average of $61,937. Historically, affluent voters have favored Republicans, but Democrats tied with Republicans among voters with a household income of over $200,000 in 2020 nationally. 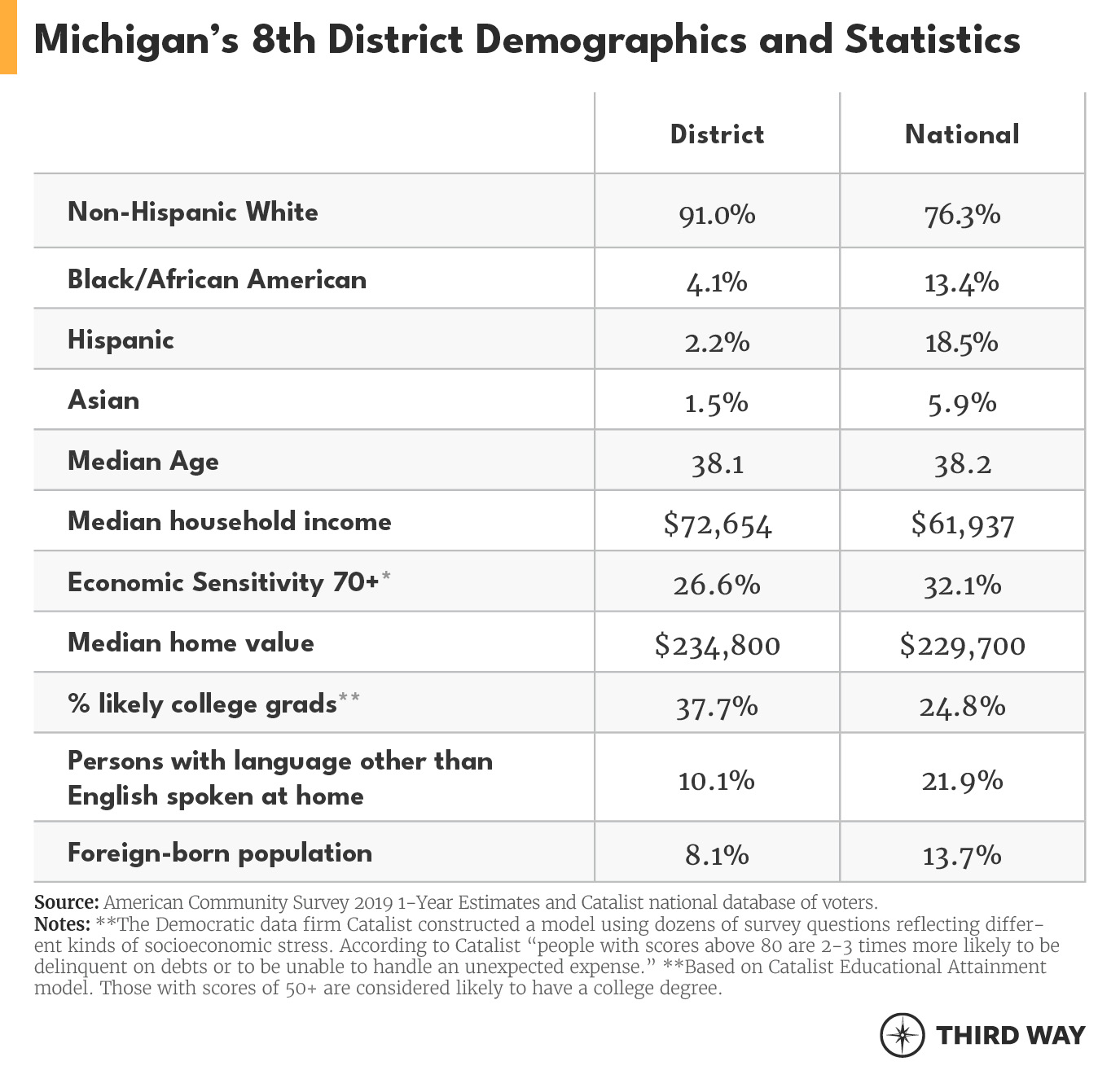 The 8th district has primarily favored Republicans in recent years, although voters here have shown a willingness to support candidates of both parties. The district backed Barack Obama 53–46% in 2008, but for the next several elections it favored Republicans at the Presidential level, voting for Romney in 2012 and Trump in 2016. In both the 2012 and 2016 elections, Romney and Trump eked out narrow majorities of 51%, but Clinton underperformed Obama’s 2012 performance; Obama won 48% in the district in 2012, while Clinton won only 44% in 2016. At the congressional level, Republicans held the seat from 2001 until 2018.

After losing the district up and down the ballot for several election cycles, Democrats’ fortunes in the district changed in 2018. This time, Democratic gubernatorial candidate Gretchen Whitmer won a slim majority of the district’s vote with 51%, along with Democrat Elissa Slotkin, who also won 51%. 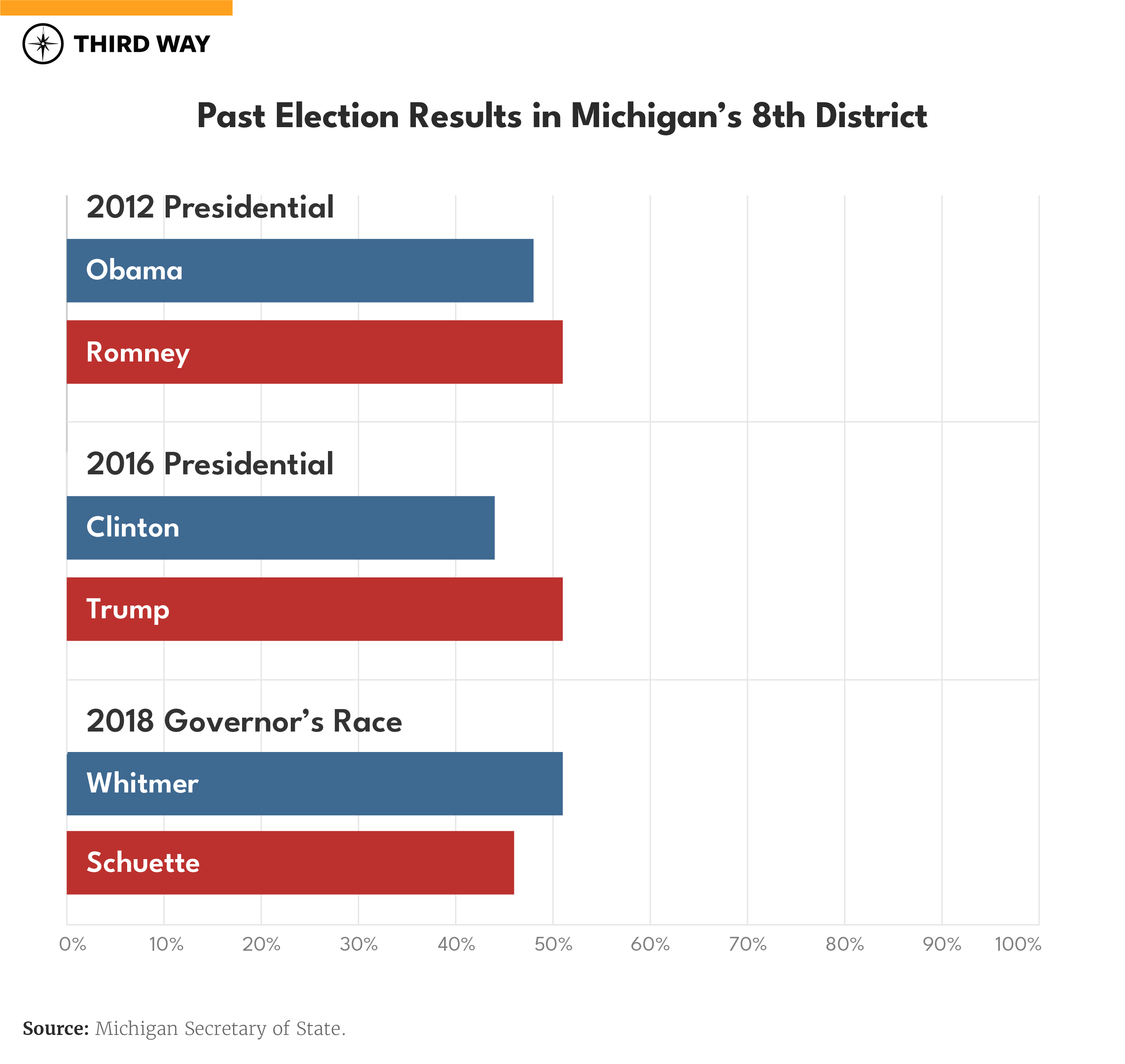 2020 delivered Democrats a split result in Michigan’s 8th. Slotkin won reelection by a decent 3.6 percentage points, but Biden lost the district by a point, and Democratic Senator Gary Peters lost by three.

A key deciding factor in the 2020 race for the district was the margin in deep-red Livingston County. Biden lost Livingston County by 23 points, and Peters lost by 25. Slotkin was easily defeated in the county as well, but she held the margin to an 18-point loss. Slotkin gained on her performance from 2018 in Livingston County, winning 40% of the vote, up from 34% in 2018. 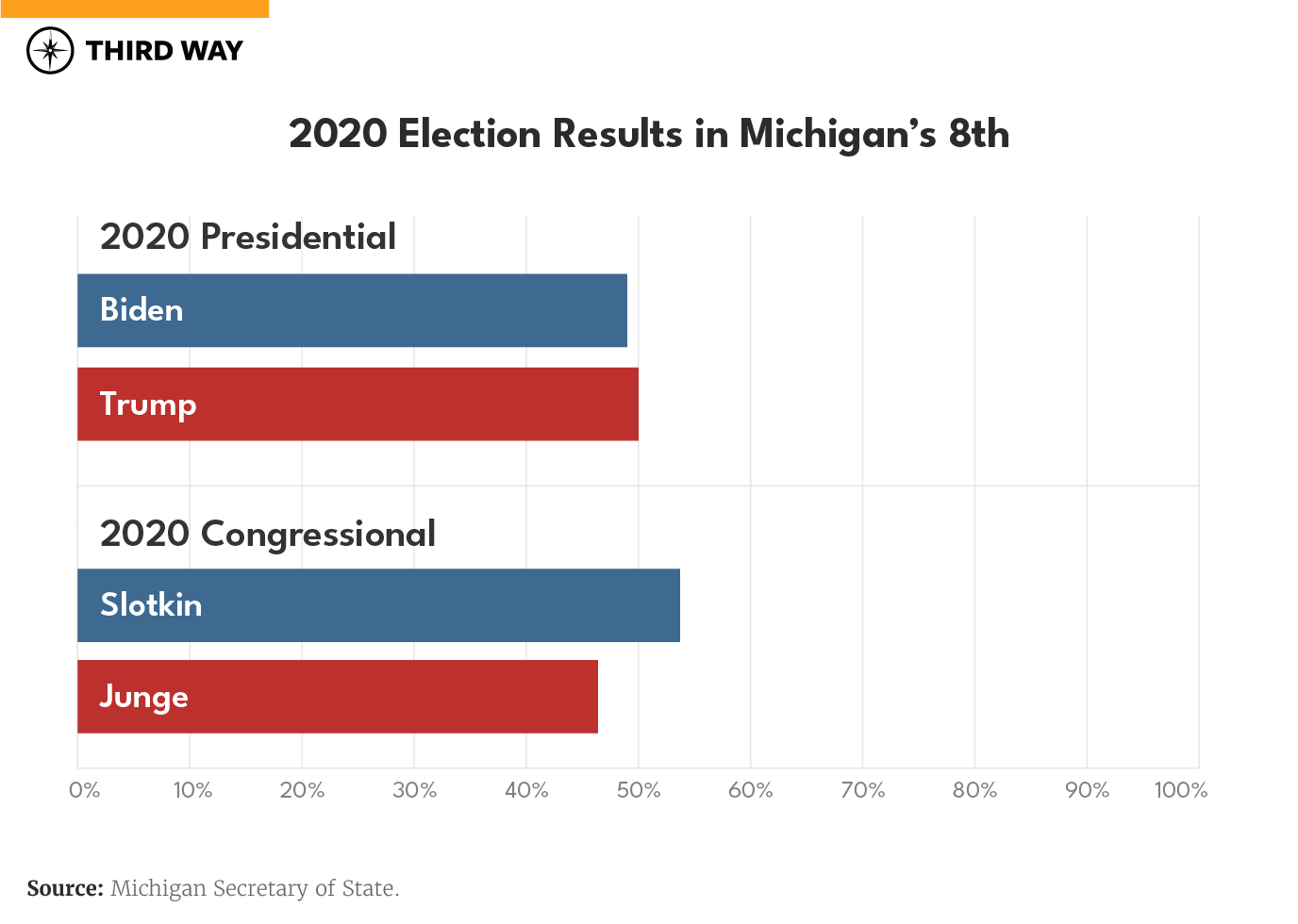 Politicians and voters in the district have noted the importance of Livingston County to Democratic success. According to an interview conducted in the district by Politico before the election, an evolution in Livingston County is core to the evolution of the district. A voter quoted in the article said, “What scares Republicans is the change in Livingston. It’s a high-growth area, and that growth is coming from suburbanites who aren’t sure they identify as Republicans anymore.” To win the district, Democrats need to appeal both to moderate and conservative-leaning swing voters in Livingston County and base Democratic voters in Ingham and Oakland counties. The fact that Slotkin has performed increasingly well in Livingston County, winning 40% in the county and gaining six points from her 2018 performance, indicates that she has cracked the code on appealing to a sizeable chunk of the county’s voters. Her performance in the county serves as a warning sign for Republicans that Democrats really can appeal to Livingston voters. And in winning over 40% of Livingston County, Slotkin did not turn away Democratic base voters; in fact, she overperformed Biden and Peters in Ingham County as well. Slotkin’s 2020 results prove that she has charted a consistent path for appealing to both swing and base groups.

Slotkin’s campaign had strong message discipline and a popular platform. Throughout the campaign, Slotkin was laser-focused on health care and COVID-19 economic relief. Slotkin championed protecting the Affordable Care Act (ACA) and lowering the cost of prescription drugs in 2018 as well, so this emphasis brought continuity to her campaign message. It is likely that voters in the district supported Slotkin’s policies on health care and COVID-19 relief, and they rewarded her with reelection for those stances. The statewide and national races, however, were more tainted by partisanship and had more complicated messaging, so the traditionally Republican district stuck with its partisan lean and favored Trump and John James (Senator Peters’ ultimately unsuccessful Republican opponent).

Slotkin’s message discipline was particularly apparent in her debate with her own Republican opponent Paul Junge. She stuck with issues that were clearly popular in the district, and Junge shied away from directly disagreeing because of those issues’ appeal. Slotkin spoke frequently about protecting the ACA and expanding it, protecting Social Security and Medicare, and passing an aggressive COVID-19 relief package for businesses, schools, and families. Despite opposing Slotkin’s position on healthcare, Junge did not disagree with her points in the debate, suggesting that he was defensive on these issues and knew that these stances had widespread support in the district.

Slotkin and Junge agreed that the payroll tax should be maintained by the Senate, which funds Social Security and Medicare, making it clear that the district’s voters support these key social services despite its wealthy and conservative leanings.

On health care, Slotkin and Junge both stressed the importance of protecting people with pre-existing conditions, though Slotkin had a clearer answer on how to achieve that goal. Slotkin emphasized her support for expanding the ACA to include a public option, while Junge provided only a vague answer on how to protect pre-existing conditions. Junge’s muddled response on health care suggested that the ACA is popular in the district and that he would imperil himself electorally by vocally supporting its repeal. Slotkin also focused on lowering the cost of prescription drugs by allowing the government to negotiate with pharmaceutical companies to lower costs, consistent with her message in 2018.

On COVID-19 relief policy, Slotkin touted her work with the Problem Solvers Caucus to provide assistance to state and local governments, support schools, expand unemployment benefits, and provide stimulus checks to Americans. While Junge did not have a specific policy proposal, he said he also supported policies to assist with state budgets and continue both unemployment benefits and stimulus checks.

Slotkin’s laser-focus on health care and COVID-19 economic relief, and Junge’s vague answers on these key policy areas, suggest that Slotkin is acutely aware of her district’s priorities and what its voters support. While the district tilts toward Republicans, Slotkin was able to win twice in the district by touting popular policy positions and hammering them home, leaving no doubt on where she stands and what she aims to achieve in office.

Michigan’s 8th Congressional District exemplifies the kind of place where Democrats have great potential to thrive but have not yet sealed the deal. Democrats’ continued strength with young and non-white voters and their increased strength with suburban college-educated women put them in prime position to lock down this key swing district, if they can hold their losses to a minimum with exurban voters. In successfully breaking through in Livingston County, Congresswoman Elissa Slotkin Congresswoman Elissa Slotkin charts a path for Democrats in the district, with a powerful brand and a popular message.