Independent Nation: The Rise of "None of the Above"

Political common wisdom says that in this Presidential election, many voters aren’t satisfied with the two major party candidates and will cast their ballot in opposition to, rather than support of, one of the options on the table. But to the extent that this statement is true, it is indicative of a larger trend rather than simply a one-time phenomenon: changes in voter registration since 2008 reveal that Americans are less attached to the two parties and more likely to select “none of the above.” 1 This trend is even more pronounced in the current Presidential and Senate battleground states. Across the country, the number of voters who are registered as Independents has skyrocketed over President Obama’s two terms, meaning that Hillary Clinton faces a different electorate—as do the candidates whose races will determine control of the Senate. In fact:

Voter registration increased by upwards of 4.5 million Independents since the last time two non-incumbent candidates ran for president. All told, since 2008:

If this uptick in Independent registration continues apace over the next two Presidential terms, there could be more Independents in the states that keep partisan voter registration data than Republicans by 2024. As it stands, the gulf between Independent and Republican registration has been halved during the course of the Obama Administration.

There are now more Independents than Democrats or Republicans in seven states—Alaska, Colorado, Iowa, Maine, Massachusetts, New Hampshire, and New Jersey. Independents now outnumber Democrats in Arizona, with Republicans just slightly edging out Independents on the voter rolls in that state. And Republicans are at risk of being overtaken by Independent enrollment in California, New York, and North Carolina (the latter separated by only about 58,000 votes). 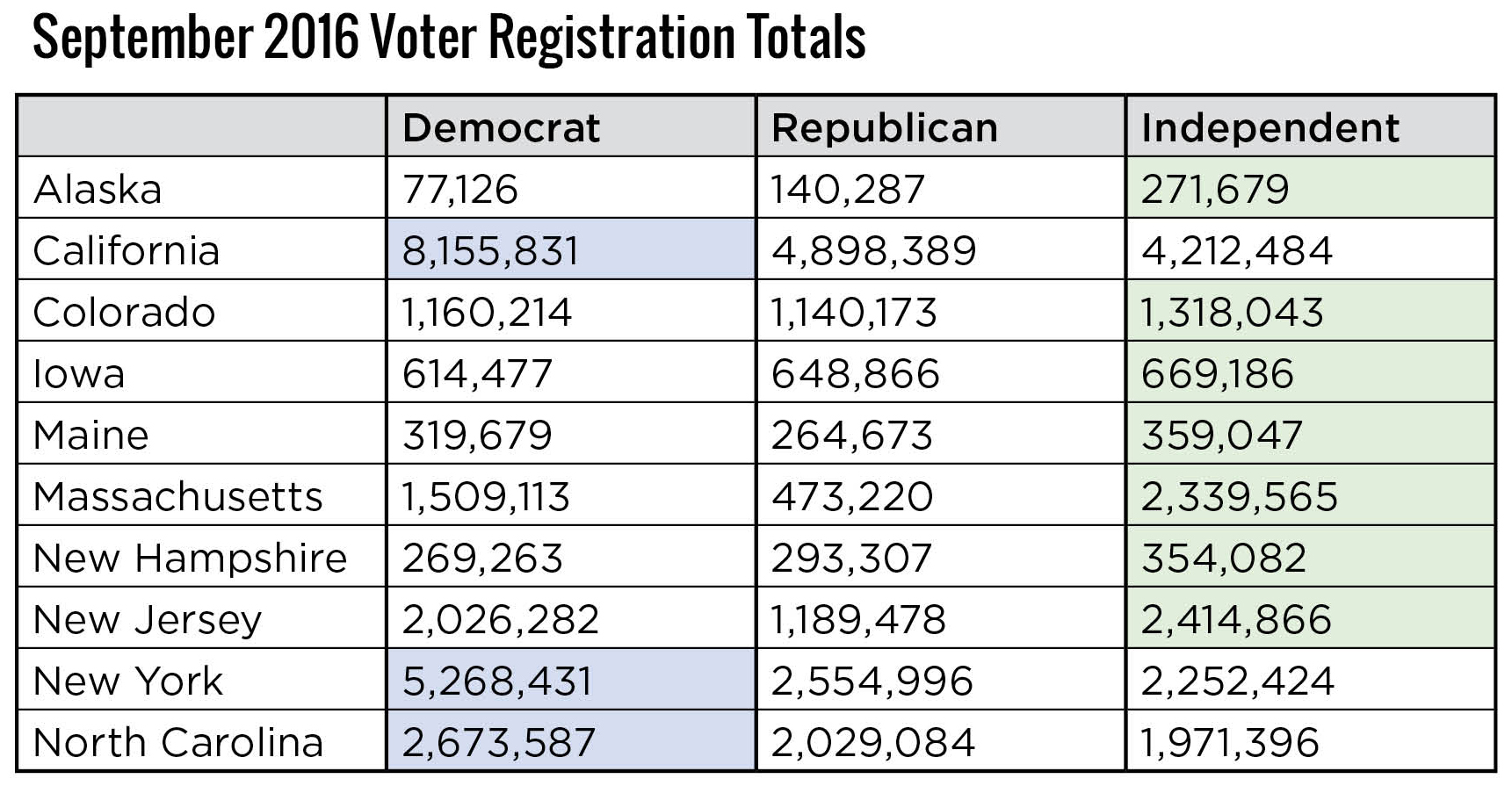 Since the 2008 Presidential election, Independent enrollment grew by more than 50% in Arizona, Nevada, North Carolina, and West Virginia, by more than 40% in Florida, Maryland, and Oregon, and by more than 30% in California and South Dakota. It’s clear that for many voters, the desire to associate with “none of the above” goes beyond the current Presidential race.

#2) The rolls of Independents have swelled in the states that will decide control of the Senate and the White House.

In three of the seven battleground states—Colorado, Iowa, and New Hampshire—Independents make up the biggest slice of registered voters, outpacing both Democrats and Republicans. And Independent registration has increased by double digits since 2008 in three others—Florida, Nevada, and North Carolina. If Democrats pick up Senate seats in Wisconsin and Illinois, as currently expected, the outcomes of the Senate races in these states with Independent pluralities and surges could determine which party controls the Senate in the 115th Congress.

In these swing states where most of the campaign resources will be expended for both the Presidential and Senate races in 2016, the increase in Independents is dramatic. Already, there are two million more Independents than there were in 2008. In Florida alone, more than 1.3 million voters joined the voter rolls—and two-thirds of them registered as Independents.

#3) Republicans have a bigger hill to climb than Democrats on the path to victory.

Republicans have long had to win more Independent voters than Democrats to put together a winning coalition, as Democrats have enjoyed a voter registration advantage nationally as well as in key states. Now, as noted above, Independents are on pace to overtake Republican registration overall in the states that report their data by partisan identification. Republicans currently do not make up the biggest proportion of registered voters in a single one of the seven battleground states with available data. Democrats outnumber Republicans and Independents in four of the seven states—Florida, Nevada, North Carolina, and Pennsylvania. If Democratic Senate candidates won in those four states plus Wisconsin and Illinois, where they are currently projected to win, the party would take back the Senate. If Hillary Clinton won those four states along with the states that are safely in her column, she would hit exactly the 270 electoral votes needed to head to the White House.

In these seven states combined, the Democratic advantage over Republicans is nearly two million votes. While the Senate map will look very different in 2018, there is no doubt that this year’s crop of Republican Senate candidates need to win big among Independent voters in order to claim victory and maintain control of the chamber.

In the eight years since President Obama was elected, public opinion surveys have found increasing shares of citizens calling themselves a political Independent rather than aligning with either of the parties. Independent voter registration has increased the most in the very states that will occupy the majority of the Presidential candidates’ time between now and November 8—and the states whose Senate races will decide which party controls that chamber in the next Congress. More than ever, it seems that Independents will are key to victory in 2016. 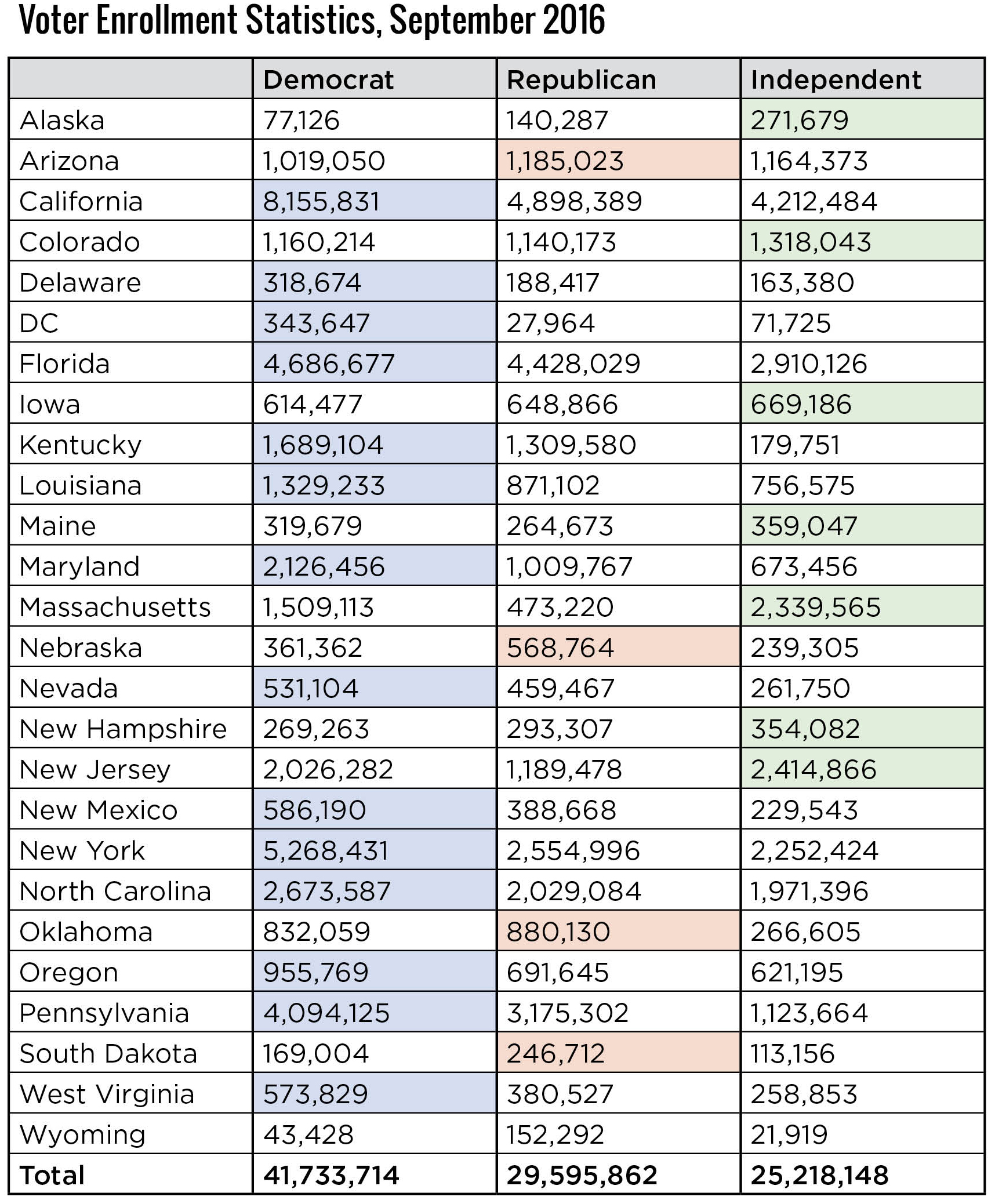