Based on the most recent voter registration numbers, it is evident that Independent voters could play an even larger role in electing the next president than they have in the past.*  In the 16 states and DC where comparable data is available, Independent voter enrollment surged by 28.4% since June 2008. By contrast, Democratic and Republican enrollment grew by 6.6% and 3.6%, respectively.

In the seven presidential battleground contests, Independents will play an especially outsized role. Independent enrollment in Colorado, Florida, Iowa, Nevada, New Hampshire, North Carolina, and Pennsylvania jumped 34.5% between June 2008 and June 2016. Democratic enrollment—up 3.7%—and Republican enrollment—up 6.6%—barely budged by comparison. As a result, Independent enrollment in these battleground states has climbed from 20% to 24.2% of the electorate in just eight years. Democratic enrollment has fallen from 42.7% to 39.9% of the electorate. Republican enrollment has dropped to 34.5% from 36.0% of voters.

This means Election Day in November may look more like Independence Day. Most Democrats are likely to vote for Hillary Clinton and most Republicans for Donald Trump, which leaves a growing band of disaffected Independents who could crown the champion. The surge in Independent voter registration has occurred despite a primary season in which 11 of the 17 jurisdictions studied required voters to pick a party prior to Election Day in order to participate. It is not unusual for voters to change enrollment to one of the parties so they can participate in primaries and caucuses, and we saw some evidence of that behavior in 2016. Our analysis shows that even as Independent enrollment has surged since 2008, in 2016 the trend abruptly stopped as the primary season began. For example, in Pennsylvania, where only those registered to one of the two parties were eligible to vote in the April 26 closed primary, Independent enrollment dipped 3.1% for calendar year 2016, while both Democratic and Republican enrollment briefly climbed.

Based on our analysis of voter registration by party identification since 2008, we present three findings:

Finding #1: Since 2008, the fastest growing group of voters has been Independents, particularly in presidential battleground states.

The increase in unaffiliated voters comes despite the past few months in which partisan registration increased during the primary season. During both the 2008 and 2016 primary season, on average the number of Independents fell in these seventeen states—although the decline was steeper in 2008 (-2.8%) than in 2016 (-0.3%). But the longer term trends are clear: Americans are voting with their feet and registering their displeasure with both major parties.

In eleven states, Independents have been the fastest growing share of the electorate since 2008. In twelve of the seventeen states, there were double digit increases in Independent voters, including Nevada (71.2%), Arizona (59.8%), North Carolina (58.9%), and Maryland (50.9%). And Independents now outnumber Democrats and Republicans in Alaska, Arizona, Colorado, Iowa, New Hampshire, and New Jersey.* Only in Iowa and Kentucky did the percent of registered Independents fall slightly during this period. 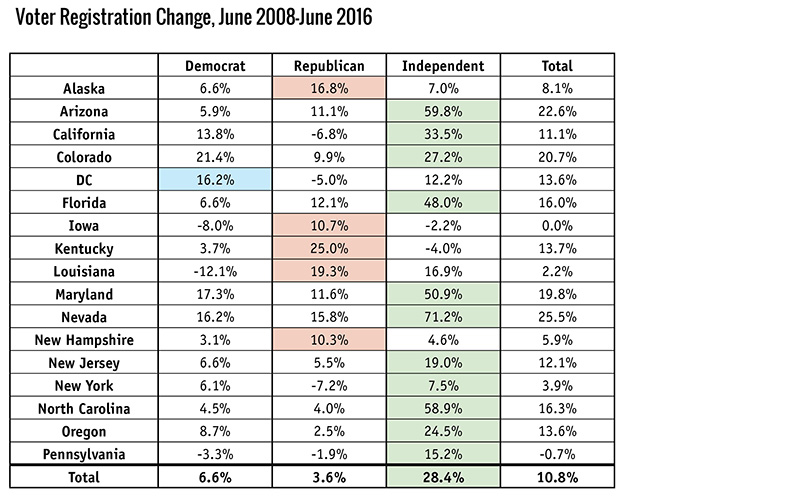 This adds up to a big shift. In June of 2008, 42.7% of voters in presidential battlegrounds were registered Democrats, 36% were Republicans, and 20% were Independents. Since then, the share of voters in presidential battlegrounds who are Independents rose to 24%, while the Democratic share has fallen to 39.9% and the Republican share has fallen to 34.5%. In an era of heightened partisan loyalties on both sides, the focus will need to be on wooing Independents during this year’s general election.

Finding #2: The 2008 primary generated more enthusiasm among Democrats than the 2016 primary.

The 2008 primary season was driven by two historic candidates vying for the Democratic nomination. That generated a lot of enthusiasm and drove Democratic participation higher than it had been in the modern era.1 Approximately 36 million voters participated in the 2008 Democratic primaries and caucuses that year, compared to about 28 million this year.2 Voter registration data confirms this difference in engagement, with Democratic registration increasing more during the 2008 primary season than 2016.

Looking back at the months that made up the 2008 primary season, total voter registration in the 17 states for which we have data increased by 1,935,108 or 2.6%. Yet those changes were not evenly distributed. Democratic registration increased by 2,087,604 or 6.5%. By contrast, Republicans added only 285,792 voters to their roles during the 2008 primary, an increase of 1.2%. The number of registered Independents actually fell by 480,078 or 2.8%, which is likely explained by the need for voters in many states to register as a partisan to participate in their state’s primary or caucus. 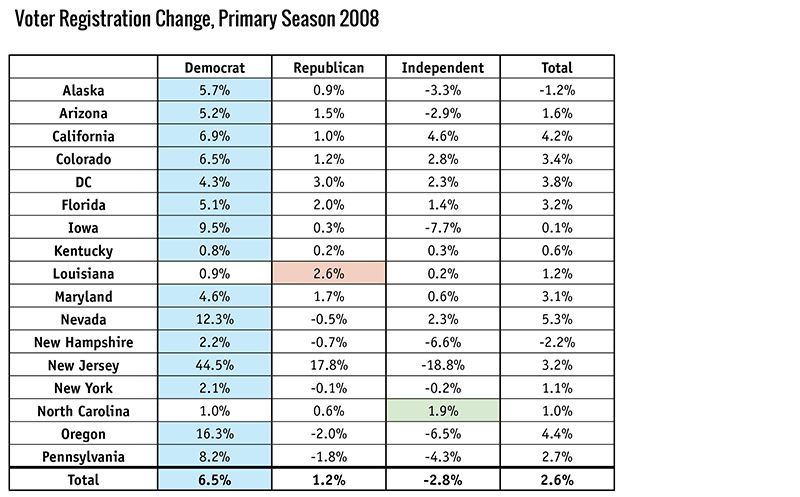 In 2008, Democratic registration outpaced Republican and Independent registration in all of these states, with the exceptions of Louisiana and North Carolina. And, when comparing those numbers to the current primary season that just came to a close, most states saw bigger increases in voter enrollment last time around. In only 4 of the 17 states did Democratic voter registration increase more in 2016 than 2008 (Alaska, Arizona, California, and New Hampshire).

Finding #3: Republicans and Democrats increased enrollment by equal shares in 2016. 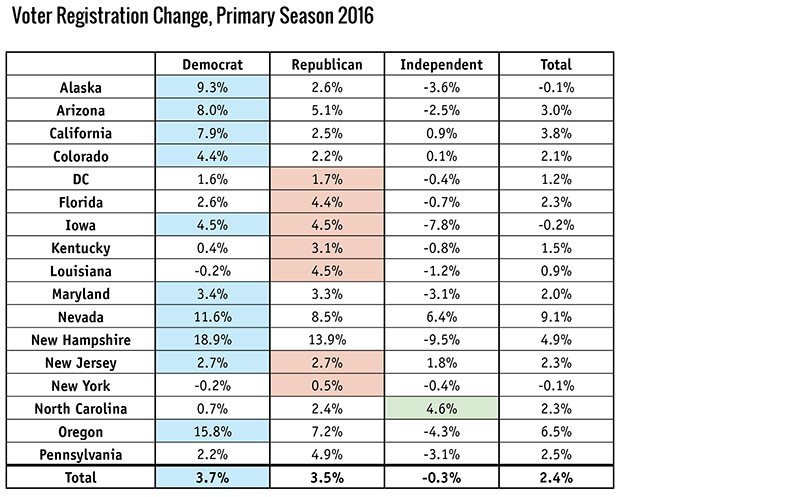 In seven of these states—Washington, D.C., Florida, Kentucky, Louisiana, New York, North Carolina, and Pennsylvania—Republican registration rose faster than Democratic registration. The largest increases for Republicans in 2016 were in New Hampshire (13.9%), Nevada (8.5%), and Oregon (7.2%). Republican registration rose in each of these states more in 2016 than it did in 2008, with the exception of Washington, D.C., and New Jersey, both of which saw bigger gains in 2008.

Over the past several years, it has become fashionable in the beltway to deny the existence of Independents—despite the increases in registered Independent voters and surveys finding record-high numbers of Americans now calling themselves Independents. In a previous study, we found that Independents—even those who “lean” towards one of the two major parties—fail to display the reliable voting patterns of partisans. And a recent Pew survey, digging deep into partisanship and attitudes, found that over half of Independent leaners say their partisan “leanings” are driven by negative feelings towards the opposite party—not by affinity for their leaned party.6 As such, they are much less likely than partisans to be motivated by a shared worldview, values, or policy preferences. But Independents are voting with their feet—and challenging the very paradigm of polarization and tribalism that has come to dominate political analysis. And they will be the key to victory in 2016. 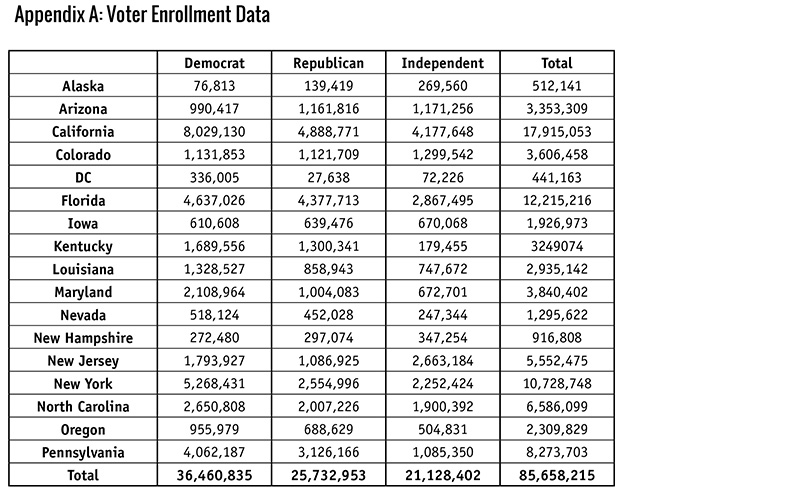