How to Unleash the LPO’s True Potential

What LPO does, and why it matters.

The LPO is a specialized agency within the Department of Energy that provides loans and loan guarantees for large scale energy projects through its three programs. LPO’s “Title 17” program provides loan guarantees for innovative technology projects in advanced nuclear energy, advanced fossil energy, renewable energy, and energy efficiency. The LPO also has a program for advanced vehicle manufacturing projects (the Advanced Technology Vehicles Manufacturing Direct Loan Program or “ATVM”) and one for tribal energy development (the Tribal Energy Loan Guarantee Program or “TELGP”).

The LPO is perhaps best-known for providing loan guarantees for technology that has not yet reached full commercialization, as part of its Title 17 program. The program examines eligible energy projects and can either guarantee a portion of private lenders’ debt in case of default or guarantee debt from the U.S. Treasury’s Federal Finance Bank.1 In this way, LPO plays a key role in helping energy project developers cross the “valley of death” by allowing them to access capital that the private sector would otherwise not provide or would only provide at extremely high costs.

The value of the Title 17 program in innovation financing is twofold. First, it assumes the technology risks of early deployment until the technology has demonstrated commercial operating history and the private sector is ready to take over. Secondly, LPO performs a level of due diligence that commercial lenders may not be able or willing to undertake for new technology. In other words, the LPO takes the time and has access to the experts (both in-house and from national labs) to examine projects from financial, technical, legal, and market analysis standpoints to determine their technical and financial viability, and to assess and mitigate the associated technology risks. Commercial lenders will then feel confident in lending to projects that have passed LPO scrutiny and have its financial backing.

The ATVM program also plays a vital role in technological innovation but differs from Title 17 in both the types of projects it supports, and in type of support it offers. In the past, ATVM has invested in manufacturing of electric vehicles (EV) and more fuel-efficient light-duty vehicles. However, it can also invest in the manufacturing of associated components and EV charging infrastructure. The Biden Administration also announced its intention to use some of the remaining ATVM loan authority to help supplement the domestic battery supply chain.2 And instead of providing loan guarantees like Title 17, ATVM offers low-cost direct loans.3

TELGP could also play an important role in our energy transition. While it has no requirements that loan guarantees go to technologies that are “innovative,” its stated goal is to support economic opportunity and improve energy independence on Tribal lands. Eligible projects may include distributed renewable resources, energy storage, electricity transmission and distribution upgrades, and energy extraction and transport infrastructure.

All three LPO programs are subject to the Federal Credit Reform Act of 1990, which requires agencies to place the cost of federal credit programs on a similar budgetary basis to other federal spending. In practice, this means that LPO must estimate and cover the cost of the government extending or guaranteeing a loan, known as the credit subsidy cost (CSC).4 Congress appropriated funds to cover the CSC for ATVM applicants (with $2.4 billion still available); ATVM at this time does not allow applicants to cover CSC, so it must have these funds appropriated in order to make loans. Congress also appropriated funds only for renewable and efficient energy projects within Title 17 (with $160 million remaining). Otherwise, the applicants to Title 17 must pay the CSC themselves, making CSC one of the largest barriers for applicants.

To date, the Title 17 and ATVM programs have supported 30 energy technology projects.5 Their current portfolio is responsible for creating at least 37,000 clean energy jobs and preventing over 60 million tons of greenhouse gas.6 Its supported projects span 18 states representing nearly every region and have helped companies deploy clean energy and low carbon vehicles at a critical time of higher market uncertainty and higher costs for clean energy technology. Though TELGP has $2 billion in loan guarantee authority, it has been unable to fund any energy development projects to date. Additional funding and targeted policy changes are needed to improve this program’s reach and efficacy. 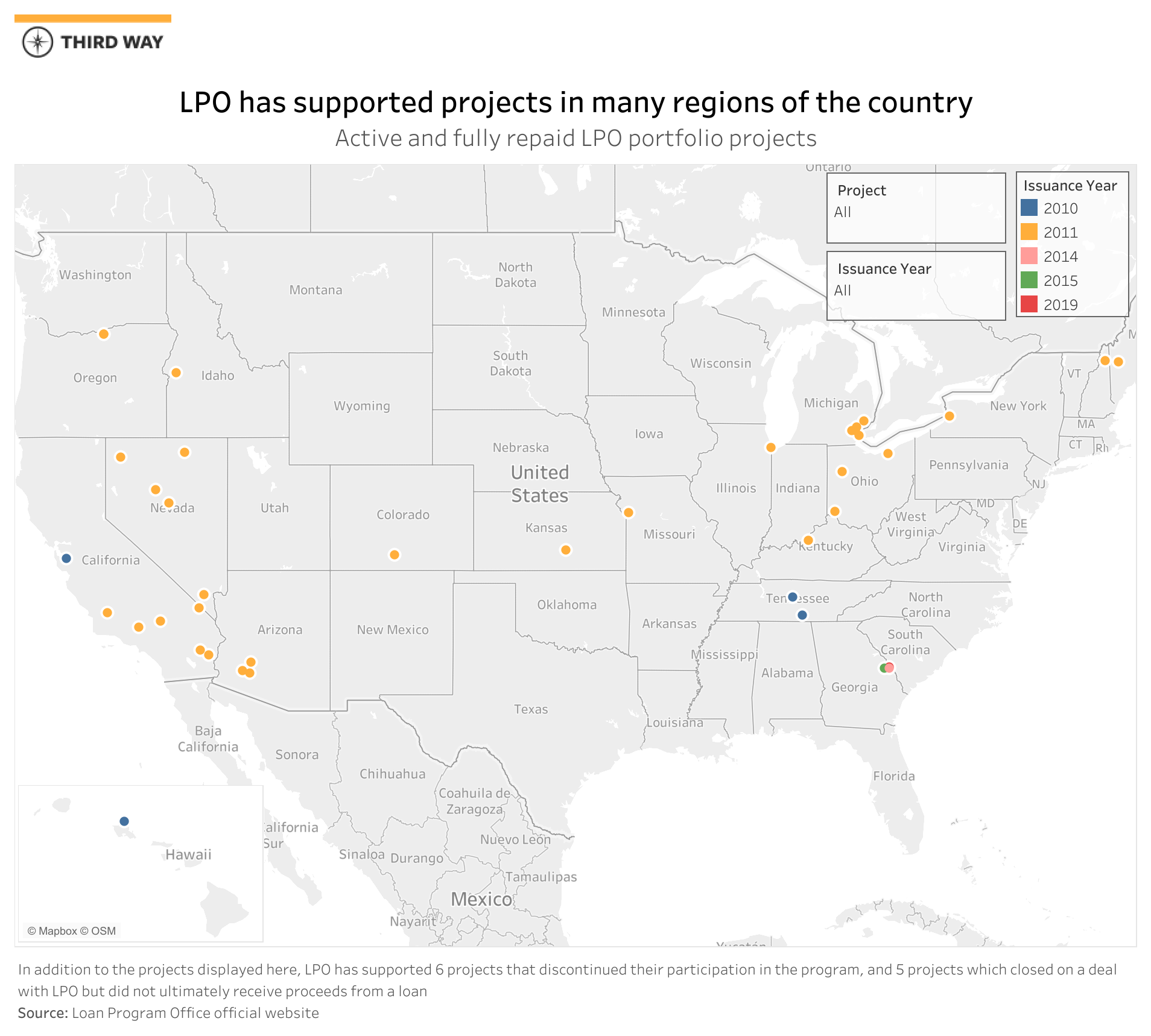 There are dozens of promising technologies emerging across the clean energy sector that could launch entire new industries, if given the right springboard. This could generate hundreds of thousands of new jobs, cement America’s global leadership in energy, and put the US closer to meeting its mid-century decarbonization goals. LPO has exactly the kinds of tools that can help make these outcomes real, but we need to make sure they’re in tip-top shape.

After soaring and slowing, LPO is ready to rise again.

In 2009, the Obama administration saw an opportunity to produce cutting edge energy jobs as one of many approaches to address the economic crisis of the time. With President Obama’s signature stimulus bill, the American Recovery and Reinvestment Act (ARRA), the administration introduced temporary LPO reforms that completely scaled up the then obscure program. These included a firm deadline to issue loans and loan guarantees by the end of 2011, and appropriation of funds to cover the CSC, removing a significant cost of securing a loan guarantee. LPO loans and loan guarantees soared.

During this period of high activity, we witnessed defaults like in the much-politicized case of Solyndra, but we saw many more successes. For instance, in 2011 LPO’s Title 17 program provided loan guarantees for the country’s first five utility scale solar projects of over 100 MW in capacity.7 By 2016, an additional 45 major solar projects of 100 MW capacity or more were built, all privately financed.  LPO made the case for investing in large solar projects, and then the market followed.

ATVM also saw big wins during this period. DOE issued a $465 million loan to Tesla in early 2010 to build a new plant in Fremont, California. This project created over 1,500 permanent jobs and brought to market the first zero-emission, zero-gas, full-size electric vehicle.8 Tesla has since expanded its manufacturing to facilities in Nevada, Texas, and New York and become a powerhouse in the global EV industry.

About half of all historical LPO disbursements occurred in the 2010-2013 period, which mainly captures the construction periods for loans that closed before the 2011 deadline.9 But activity tapered off rapidly after that. In fact, nearly all of LPO’s active projects closed their respective deals before the end of 2011.

Several factors contributed to this slowdown. The transition after the 2011 deadline created administrative challenges. Lack of clarity in eligibility criteria and complicated application processes deterred many prospective borrowers, despite the draw of low interest rates. The Trump Administration made no secret of its desire to see LPO failed rather than fixed. President Trump’s annual budget request consistently sought to defund and shutter the Office, which couldn’t have been encouraging for project developers deciding whether to invest the time and resources in a program that could vanish before they reached the closing table.

The Biden Administration and Congress are working to improve LPO right now.

After years of fighting just to keep its engine running, LPO is suddenly shifting into high gear. The Energy Act of 2020 introduced the first set of permanent reforms to LPO since its creation in 2005. It increased processing transparency, deferred fee payment to the closing of the loan guarantee, and expanded project eligibility.10 Under the Biden Administration, DOE has quickly worked to clarify costs and charges, provide flexibility in repayment procedures and interest rates, and further expand the list of eligible technologies. These steps were designed to make DOE’s financing tools more efficient, accessible, and appealing to potential borrowers—and they seem to be working. DOE Deputy Secretary David Turk recently noted that LPO had three applications in all of 2020. It now receives about three applications per week.11

The House Energy and Commerce Committee’s CLEAN Future Act and the Senate’s Infrastructure Investment and Jobs Act (IIJA, formerly known as the Bipartisan Infrastructure Framework),  both include provisions that expand ATVM eligibility. IIJA makes low-emission medium- and heavy-duty vehicles, aircraft, trains, ferries, and more eligible for ATVM loans. Both bills also include provisions that allow applicants to guarantee or supplement loans from state financing entities such as green banks and clean technology accelerators.

The CLEAN Future Act and the IIJA also enable financing to an even broader range of applicants by clarifying and refining the definition of something called the “reasonable prospect of repayment.” Loans and loan guarantees can only go to projects that have a reasonable prospect of repayment, but the definition of this term has been left vague prior to these two pieces of legislation. Current interpretations of this concept can limit LPO access to only a subset of more established firms, or projects that can secure sufficient cashflow with offtake agreements.12 The CLEAN Future Act and the IIJA would allow firms both large and small to use other metrics, such as non-contractual cash flows, the overall financial strength of the loan recipient, or the financial strength of the loan recipient’s investors and strategic partners, to demonstrate their ability to repay a loan.

We know LPO can run well. Now let’s turbocharge it.

Word is already getting out that LPO is open for business and ready to provide more constructive partnerships than it’s been able to for the past several years. Recent adjustments to the loan programs will help LPO operate well. But given the scale of opportunities to establish new industries, the potential for domestic jobs, and the urgent need to deploy innovative carbon-free technologies to meet emissions goals, we need more than “well”. We need LPO to perform spectacularly. Through the bipartisan infrastructure package and reconciliation, Congress can provide additional tools and resources to maximize the returns from this newly upgraded LPO. To ensure we take advantage of the opportunities heading our way, Congress should: