Less than 10% of the US population has served or currently serves in the US Armed Forces,1 following a downward trend since the end of World War II.2 As a result, fewer Americans are familiar with the basic details of the US Armed Forces. This guide is designed to provide a brief overview and basic facts about the Department of Defense (DOD) and America’s Armed Forces.

DOD is responsible for providing the military that secures the nation from external threats. Article II of the Constitution designates the President of the United States as Commander-in-Chief and grants the President authority over all US Armed Forces.3 Article I of the Constitution, however, grants Congress exclusive authority to declare war, raise armies, and establish rules for the military.4

The US Armed Forces, which became an all-volunteer force in 19735 consists of five service branches: the Army, Navy, Air Force, Marine Corps, and Coast Guard. All of the service branches are housed within DOD, except the Coast Guard which falls under the Department of Homeland Security during peacetime.

The Department of Veterans Affairs (VA) provides comprehensive medical care, educational opportunities, rehabilitation services, and numerous other benefits to veterans of the US Armed Services. The VA is separate from DOD and serves former members of the Armed Forces.

Policymakers and elected officials should be familiar with military culture, jargon, and the structure of the defense bureaucracy to perform their duties.

The Department of Defense is the federal department responsible for the supervision and coordination of the US Armed Forces.

The DOD has approximately 2.87 million personnel, divided between 2.15 million uniformed service members and 732,000 civilians. Additionally, the organization maintains 4,800 bases and facilities around the world and operates in more than 160 countries.6 DOD’s budget was $686 billion in Fiscal Year (FY) 2019. 7

DOD’s organizational structure consists of the Secretary of Defense, the Joint Chiefs of Staff, the US Armed Forces, nine Combatant Commands, and four national intelligence agencies. A description of each is below: 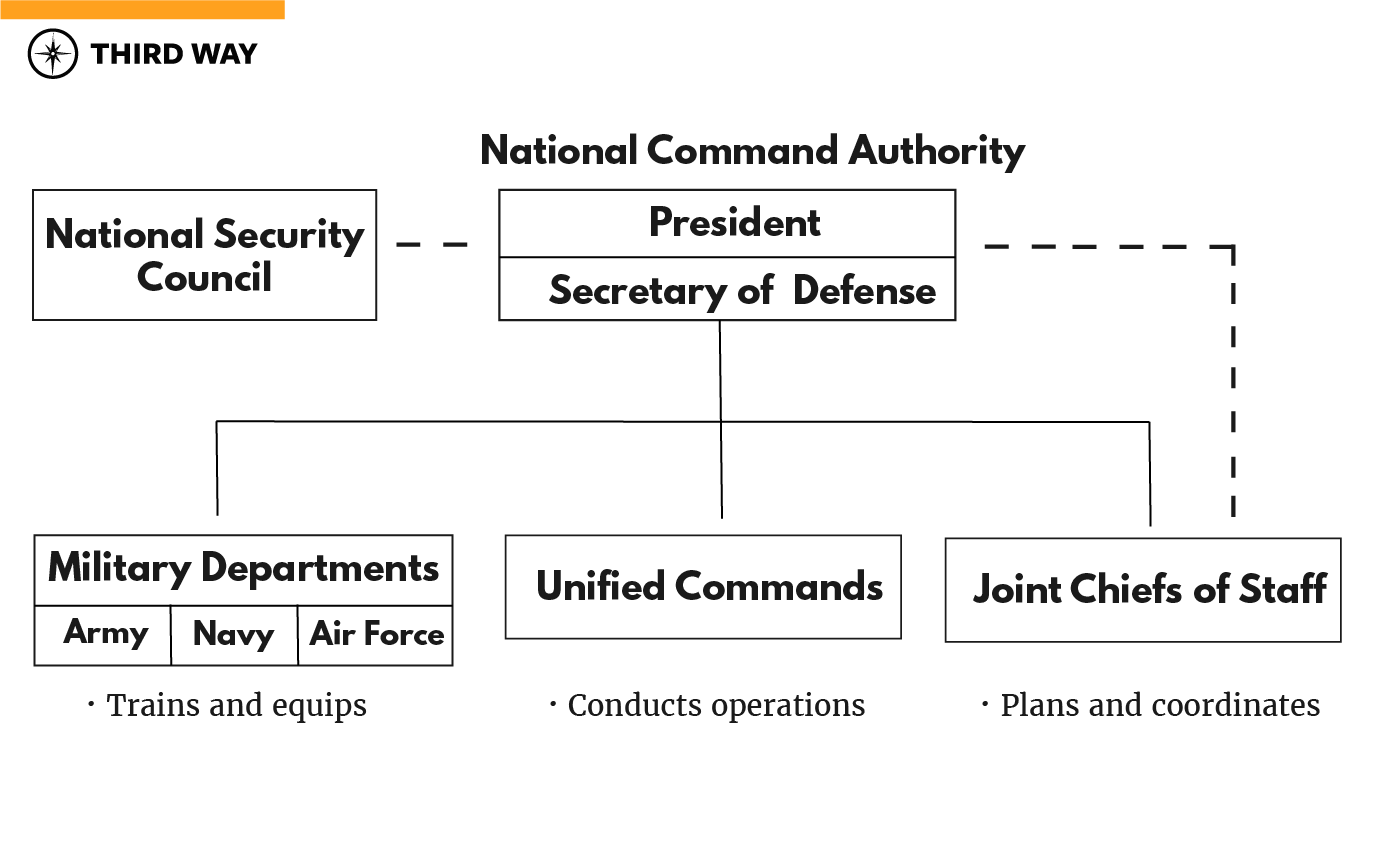 The Secretary of Defense

The Joint Chiefs of Staff

The Joint Chiefs of Staff (JCS) are the highest-ranking members of the Armed Forces that advise the President, Secretary of Defense, and the NSC. The Service Chiefs advise and plan only and hold no command authority over the deployment of military personnel.10

The US Armed Forces

Since the elimination of the Draft in 1973,11 The US Armed Forces have been composed of volunteers. Approximately 2.15 million Americans currently serve in the US Armed Forces making military personnel roughly 1.5% of the age 18 to 55 general population. The US Armed Forces consist of five service branches: the Army, Navy, Air Force, Marine Corps, and Coast Guard.12

The US Army is the service branch responsible for land warfare. It conducts ground combat and is known for administering heavy ground combat equipment such as tanks and artillery cannons. The Army also possesses helicopters that provide airlift capabilities and close air support. The active component of the US Army boasts nearly a half-million service members and is the largest branch within the Armed Forces. 13

The US Navy is responsible for all combat that occurs on the high seas. The Navy maintains a fleet of vessels such as large battleships, submarines, and aircraft carriers. Additionally, the Navy operates a significant number of fixed-wing jetfighters, planes, and helicopters.

The US Marine Corps

The US Marine Corps is responsible for combat operations to secure beaches as well as conducting short-term combat operations with limited logistics support. The Marines make use of amphibious landing crafts, helicopters, jet fighters, and gunboats to accomplish its various missions. In addition to the Marines’ wartime mission, the organization is also responsible for the maintenance and operations of Marine One, which is the helicopter that carries the President. The Marines also provide security for US embassies, consulates, and other government offices.21 The Marines are a separate branch of the US Armed Forces, however, they report to the Department of the Navy.

The US Air Force

The US Air Force is the aerial and space warfare service branch. Its missions include attacking ground assets from the air, maintaining control of airspace, and military airlift. The Air Force is also responsible for military operations in space such as the destruction of enemy satellites.24 Finally, it is responsible for Air Force One, which is the President’s official airplane.

The US Coast Guard

The US Armed Forces are organized into 10 Unified Combatant Commands (COCOMs), which provide command and control for military personnel regardless of branch. The purpose of the COCOMs is to promote coordination and cooperation between the service branches in the execution of their missions. Six geographic COCOMs are responsible for all seven continents. Additionally, there are four functional COCOMs34: 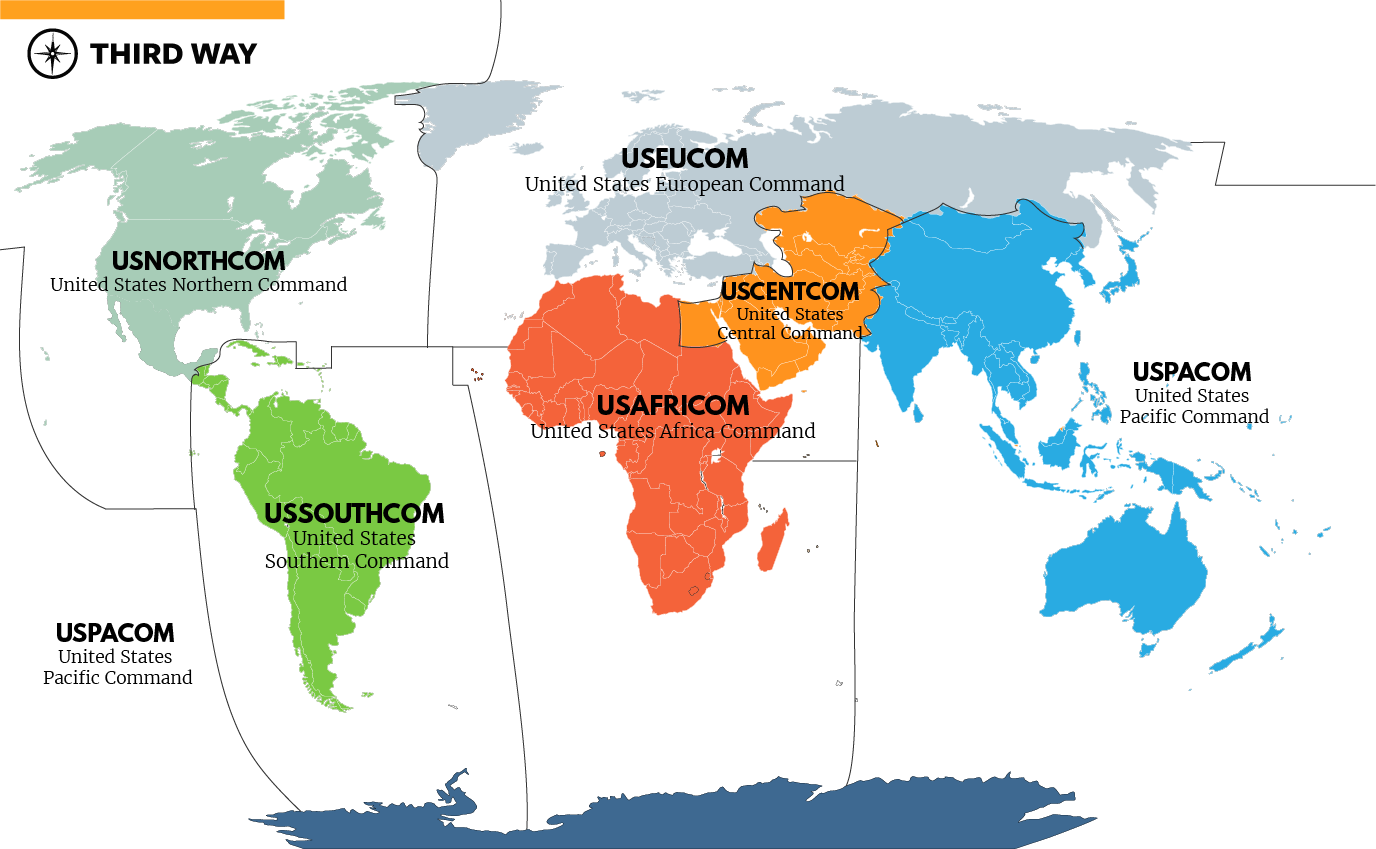 The uniformed members of the US Armed Forces are made up of commissioned officers and enlisted personnel.35

Commissioned officers are uniformed DOD employees that hold a position of legal authority and act as managers for enlisted service members. These officers are responsible for planning military operations and leading service members during peacetime and war. There are multiple ways to receive a military commission, however, most officers are commissioned in one of three ways: attending a military service academy such as West Point or the Naval Academy, participating in a Reserve Officer Training (ROTC) Program at participating universities, or through a direct commission.36

In addition to the military intelligence professionals serving in the service branches, DOD also has authority over four national intelligence services:

All four of DOD’s intelligence agencies are also members of the US Intelligence Community (IC). As such, they report to the Secretary of Defense and the Director of National Intelligence.41

The Military Health System (MHS) provides health care to active component military personnel, retirees, and their immediate families.42 A key component of the MHS is TRICARE, which is the health care program that provides comprehensive health coverage at no additional cost to service members. As part of TRICARE, active component service members, qualifying reservists, retirees, and dependents receive preventive care, emergency services, dental, behavior health, and a myriad of other health care benefits.43

The Department of Veterans Affairs provides various services to individuals who previously served in the US Armed Forces.

The VA manages programs designed for veterans and their families. The VA is most widely known for providing health services to qualified military veterans at VA centers and affiliate clinics. The VA also administers other benefits to veterans and, in some cases, their families, including education and training benefits,44 service-connected disability compensation, home loan guarantees, pensions, burial services, and other benefits.45 The VA is not a DOD entity; the VA is a cabinet-level agency overseen by the Secretary of Veterans Affairs.

The term “Veteran” is used to describe any individual who served any length of time in the US Armed Forces. Legally, however, a Veteran is any person who has served in the active component of the Armed Forces and was not dishonorably relieved of duty. Reserve component service members only receive veteran status if they serve at least 180 consecutive non-training days on active duty or have served for 20 years in the Reserve component.46 Military retirees are Veterans that have served honorably for 20 or more years or have been medically retired due to service-connected injuries. Unlike non-retired veterans, retirees also maintain access to many DOD services such as TRICARE, which provides members of the Armed Forces full health care coverage at no cost to the service member.47

There are a number of common misconceptions about the military and Veterans.

There are several common misunderstandings about the US military and Veterans that policymakers and their staff must be careful to avoid. These misconceptions include: