Getting Serious about Direct Air Capture

Direct air capture (DAC) has received some well-deserved attention on Capitol Hill over the past year, given the impressive economic and climate benefits it offers the nation. But ensuring DAC reaches its full potential will require more than just recognition—the federal government needs to make a significant and sustained increase in RD&D investments in order to get our emerging DAC industry established. If DAC champions can expand their ranks and convert recent momentum into legislative wins, this suite of technologies could create thousands of domestic jobs and put the goal of achieving net-zero emissions by 2050 within reach.

Some Background on DAC (DACground?)

The world’s first commercial-scale DAC facility in Switzerland just celebrated its third birthday in May of 2020, and there are no US facilities in operation yet. So it’s not surprising that many federal policymakers are just now learning about this carbon capture technology—despite its importance to national priorities like fighting climate change and creating long-term economic growth.

At the most basic level, a DAC facility can be compared to a giant dehumidifier, only it removes carbon dioxide (CO2) instead of water from the air around it. Because the concentration of CO2 in the atmosphere is so low (0.04%), DAC machines have to filter huge amounts of air in order to remove a significant quantity of CO2. This typically requires a machine the size of a small building, with an array of fans to blow air past a material that chemically or physically traps the CO2 molecules. From there, the CO2 is separated from the capturing material; concentrated to a nearly pure stream; then transported to a location where it can be stored underground or used to make any number of products.

There are eight commercial-scale DAC projects currently in operation or under development around the globe (three in the U.S.), capturing a combined total of less than 100,000 metric tons of CO2 each year. One particularly important project is set to break ground in the Permian Basin of Texas in 2022. When completed, it will be the largest DAC facility on the planet, capturing up to one million tons annually. That’s 1,000 times more than world’s first DAC machine could capture, showing tremendous progress in this industry in a few short years. But we will need to build more than 1,000 facilities this size across the globe to help the planet reach net zero emissions by 2050. We’re moving in the right direction, but there’s still a very long way to go. 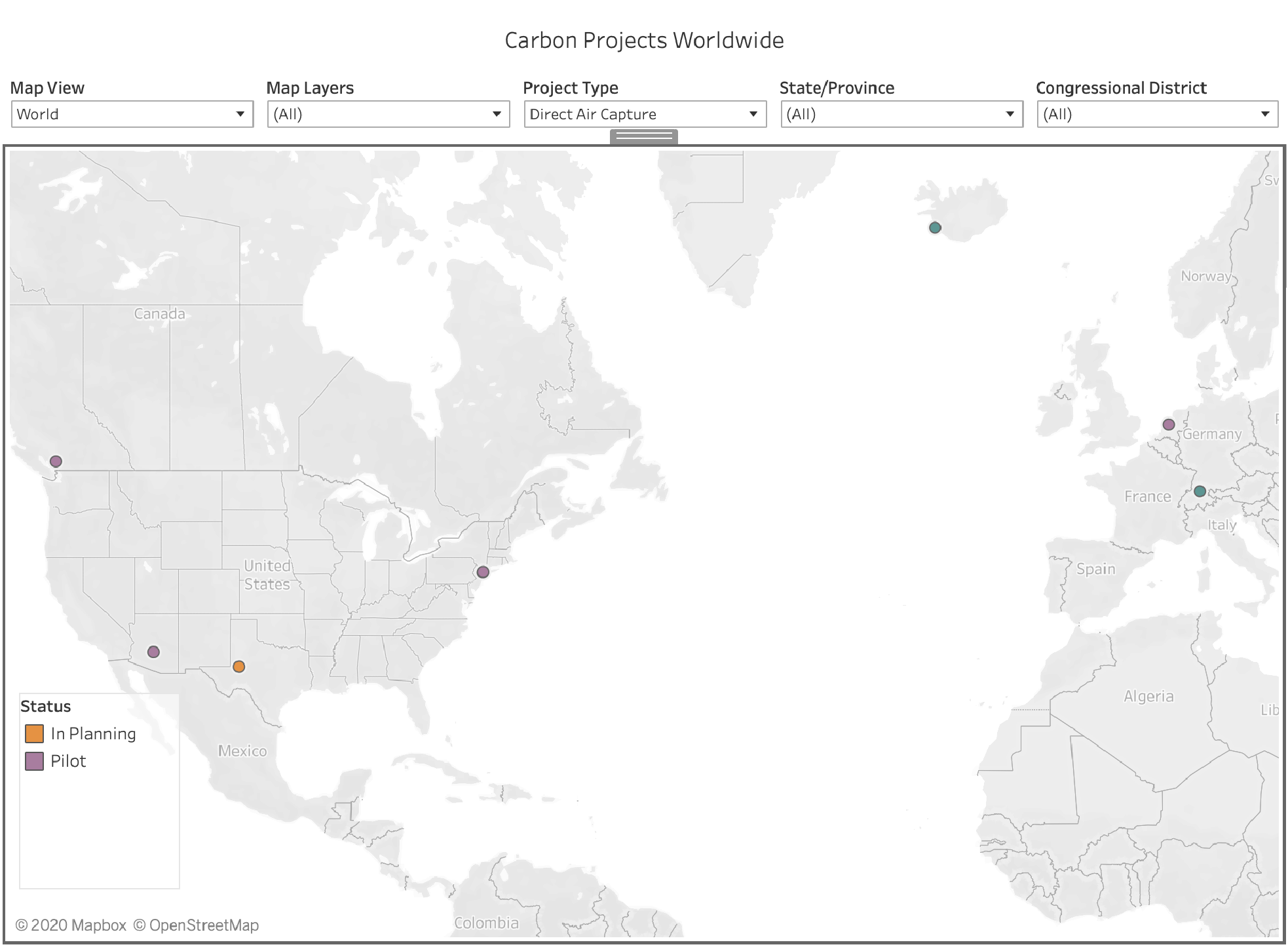 Support for DAC is Growing on Capitol Hill

The congressional winds have been blowing in DAC’s favor. Over the last few years, the technology has increasingly captured lawmaker interest in energy and climate policy discussions. Its rapidly expanding list of champions on the Hill want the federal government to dedicate more resources to the kinds of research, development, and demonstration activities that would allow DAC to flourish in the commercial market. DAC is drawing supporters from both sides of the aisle, but the most noteworthy of its recent wins have been in the Democratic-led House of Representatives. Advocates have pushed pro-DAC provisions into several of the chamber’s most important legislative efforts, such as spending bills, the defense authorization, major reports, and an infrastructure package.

The progress on Capitol Hill in supporting and funding DAC technology is encouraging, but it’s simply not enough. Despite recent attempts in the House to increase funding, the cumulative total of federal investment in DAC is well under $100 million, and most of this limited support came in just the past year. In contrast, the National Academies of Science, Engineering, and Medicine (NASEM) and the Energy Futures Initiative (EFI) recommend an average yearly appropriation of $150-$160 million/year over the next decade to help DAC reach a 1 gigaton/year capture rate by 2050 – the rates needed to have a significant climate effect. This might sound like a lot, but it’s actually a drop in the bucket (a little more than 0.01%) of the $127.2 billion that the federal government spent on all forms of R&D in 2018. In summary, the investment the US government needs to make in DAC is long overdue; it’s not particularly expensive; and it has enormous potential to add to the public good.

The Economic Case for DAC RD&D

If the DOE administers DAC RD&D funding well, it could result in serious economic benefits to the United States. NASEM highlighted that the majority of RD&D spending will need to go toward demonstrations and deployment. As economic stimulus, investing in clean energy demonstrations provides the near-term jobs and long-term growth that will help this country recover from the economic destruction of COVID-19. Rhodium Group recently studied the employment and business opportunity for DAC and found that each facility that removes 1 million tons of CO2 per year would create roughly 3,500 jobs. By supporting a series of demonstration projects that help DAC technologies break into commercial markets, federal investments will help launch a full-scale DAC industry, creating 300,000 jobs by 2050.

A scaled-up DAC industry would also mean jobs in related industries. For example, a study in Nature Communications found that the breadth of DAC deployment needed by mid-century will necessitate a major increase in manufacturing, the chemical industries, and electricity production to power DAC machines. Moreover, the United States will need to construct an extensive transport network to move CO2 from capture facilities and develop underground injection sites to store it. Each of these DAC-related activities would support a multitude of high-skill jobs. And because DAC facilities have few resource constraints, they can be constructed in urban as well as rural environments, creating economic opportunity for a range of communities across the country.

The Climate Case for DAC RD&D

Humankind is in big trouble if we don’t begin deploying technologies like DAC in the very near future. Analyses show that simply cutting our emissions won’t be enough to avoid the worst impacts of climate change: we’ll also need to remove a huge amount of CO2 from the atmosphere in order to hit our targets. NASEM determined that, by 2050, the world needs to be pulling 10 gigatons of CO2 out of the atmosphere each year, or roughly a quarter of global emissions in 2018.

Carbon dioxide removal (CDR) technologies (those that draw CO2 out of the atmosphere) fall under two categories: natural solutions like planting trees, and technical solutions like DAC. Expert scientific organizations like NASEM, the United Nations Intergovernmental Panel on Climate Change (IPCC), and the International Energy Agency (IEA) agree that DAC has to be a crucial centerpiece of the CDR portfolio. The Rhodium Group found that DAC would have to cover 6-19% of the CDR needed to reach net-zero emissions by mid-century. This will require the world to capture more than 1,000 times more carbon from DAC than we do today. Put simply, DAC will be critical for climate efforts, but we have a lot of catching up to do.

Whether they want to accelerate and sustain America’s economic growth or ensure that future generations can inhabit a livable planet, lawmakers have plenty of reasons to support increased investment in DAC RD&D. The progress on Capitol Hill to fund DAC over the past year is encouraging and shows that the U.S. is moving in the right direction. However, Congress needs to be taking bigger and bolder steps right away if the country is to reap the full economic and environmental benefits of a thriving DAC industry.