The transition away from gasoline and diesel powered vehicles and toward a future of carbon-free transportation is essential for the fight against climate change. In 2017, passenger vehicles were responsible for 17.8% of US greenhouse gas emissions, nearly 60% of all emissions in the entire transportation sector. Considering the advances in technology and falling costs, climate-friendly options like electric vehicles will become mainstream in the years ahead.

One important signpost to this transition is whether we have seen the end of ever-expanding sales of gasoline powered vehicles. This would be a signal of an important shift in the personal choices about what type of vehicle to drive. It would tell us that something significant was emerging that would move us toward cleaner transportation.

When no one was watching, it happened. From our vantage point, it looks like US sales of conventional gasoline powered vehicles hit their peak in 2016. Sales of these vehicles likely will never be as high as they were three years ago.

After the financial crisis ended, the US economy started growing again in mid-2009 and US auto sales grew by nearly 8% per year as the economic expansion stretched to its seventh year in 2016. But as shown in Figure 1, gasoline powered vehicle sales hit 17.3 million units that year and have been in decline ever since. 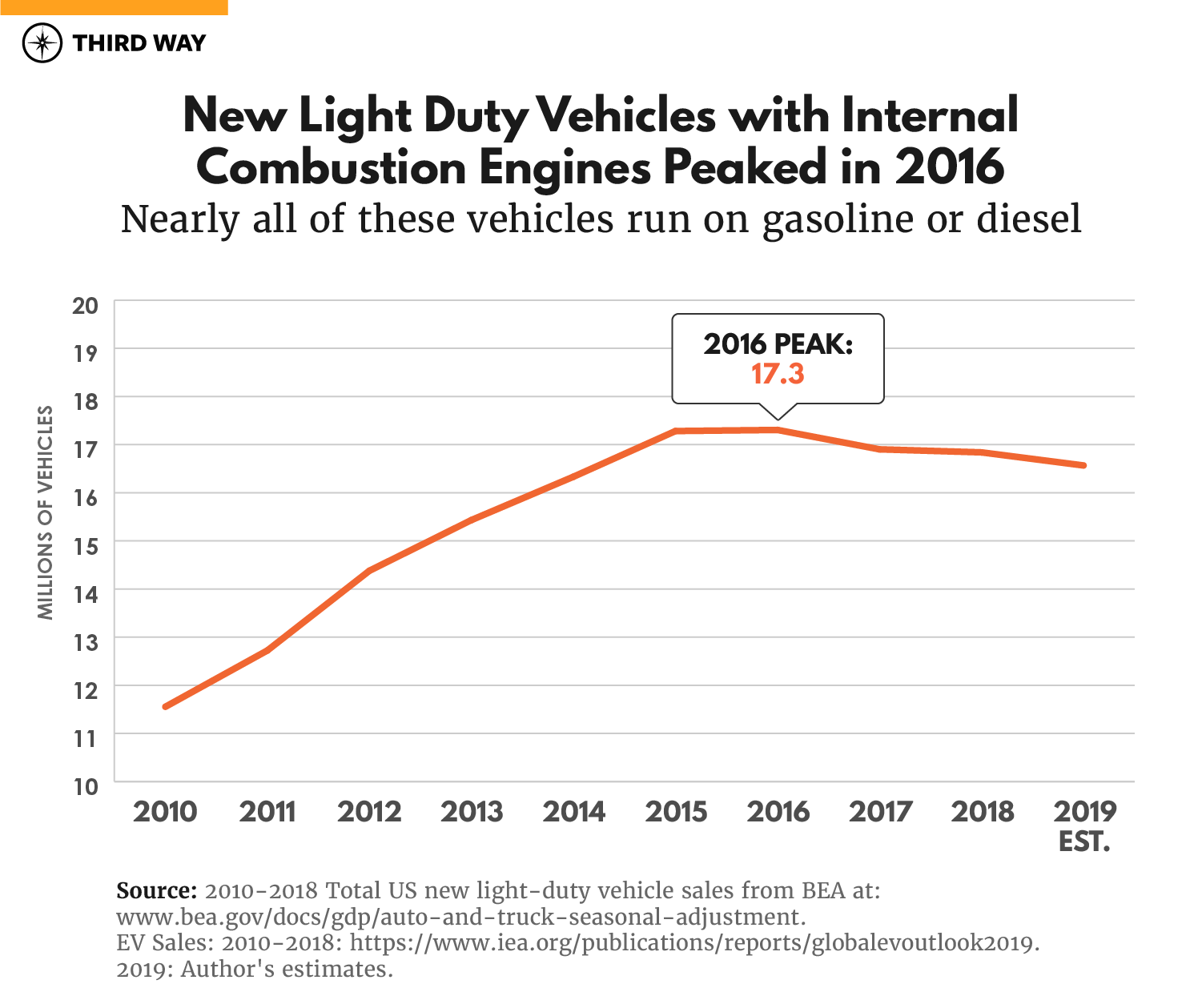 Sales of gasoline powered vehicles will continue to fall due to the strong growth and now competitive viability of electric vehicles (EVs include plug-in and battery electric vehicles). The 160,000 EVs sold in 2016 may have paled in comparison to gasoline vehicles in their peak year, but momentum was already on the side of electricity.1 In 2015, EV sales had grown at an average annual rate of 47%. The trend continued year after year, with an 81% surge in 2018 thanks to the launch curve of the Tesla Model 3.

Figure 2 shows how US sales of EVs rose from zero units in 2010 to an estimated 433,000 units just nine years later. Sales of EVs are expected to grow strongly in the near term, ensuring 2016 was the inflection point in America’s shift away from gasoline. Admittedly, a recession may cause a pause in sales, but the trend is clearly moving in a positive direction. 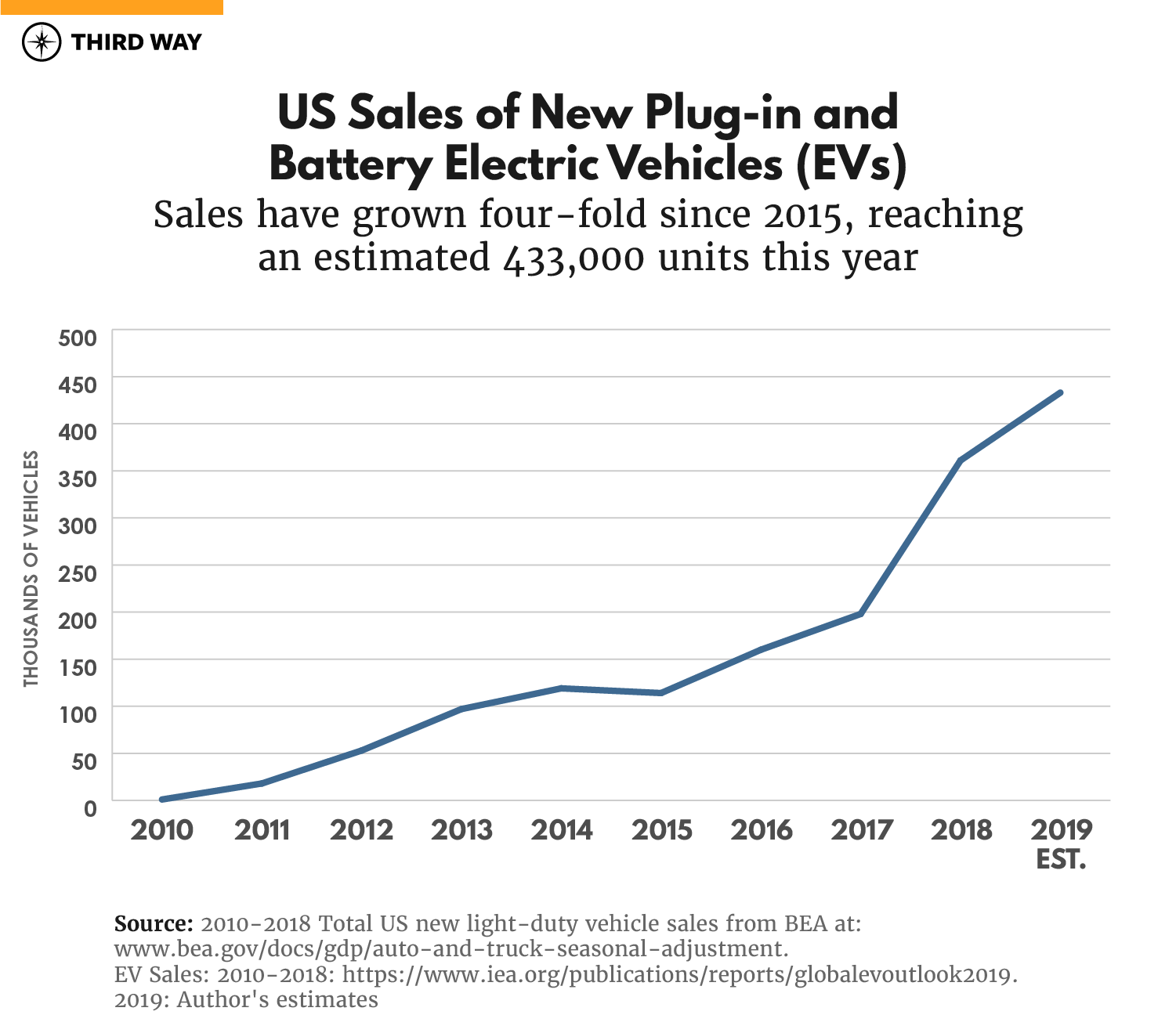 EVs Are Just Getting Started

Electric vehicle sales will continue to rise in the US for a mountain of reasons, including the following “four C’s”:

An Additional Boost from Automated Vehicles?

There is also the expanding opportunity enabled by automated vehicle (AV) features to the future of mobility. There are many types of AV content, including adaptive cruise control, automated parking and lane switching notifications, all the way to the extreme of driverless vehicles with no steering wheel. AV features require additional electricity beyond the needs of running a motor to propel forward.

Many companies, such as GM, are planning strategically to build their EVs in order to support the additional electricity requirements needed for these AV features. There are additional sensors and electronic components to support vehicle communications with the infrastructure and with other vehicles. Electricity is needed for all the bells and whistles that these new features provide to people, all driving toward advances in safety and potential reductions in congestion over time.

It is certainly true that infrastructure for EV charging is still limited, but it is growing. Public utility commissions have spurred substantial growth in charging stations during just the last few years. In November of 2018, for example, the Pennsylvania Public Utility Commission (PUC) cleared the way for a more stable regulatory backdrop, allowing for increased charging infrastructure investment across the state.6 Automotive companies are helping fill infrastructure gaps by launching financing initiatives. These include Tesla’s nationwide network, Ford Motor Company’s recent announcement to expand a network of 12,000 charging stations along with 35,000 mobile charging plugs, and the state-run “Electrify America” program funded by Volkswagen’s legal settlement regarding its violation of diesel emissions regulations.

So even under very pessimistic assumptions for low-carbon vehicles, it is challenging to design a scenario where the US sales of gasoline powered vehicles ever reaches or exceeds 17.3 million units again.

With more offerings and expanding infrastructure, EV sales could grow at double-digit rates for an extended period during the 2020’s. At the same time, several automakers are moving forward with additional emissions-free options for consumers like hydrogen fuel cell vehicles. If successful, they could only add to the downward pressure on traditional vehicle sales. So even under very pessimistic assumptions for low-carbon vehicles, it is challenging to design a scenario where the US sales of gasoline powered vehicles ever reaches or exceeds 17.3 million units again.

Changing the vehicle fleet on the road to a new technology is a massive undertaking and pulls at the fiber of all aspects of our communities and local economies.  As market forces and technology innovation yield even more incentives for consumers and auto companies to move toward cleaner technologies, the flywheel will start spinning. For instance, greater volume of EV production leads to scale economies and lower per unit costs. This, in turn, provides opportunity for companies to make pricing even more attractive to buyers.

Policy incentives should be deployed to grow battery production and retool assembly plants to produce new models in order to speed-up adoption, along with upfront tax credits to support equitable access to clean vehicle purchases. Consumers are just starting to understand the added economic and environmental benefits of these new vehicle options. The right policies would ensure gasoline powered engines stay in the rear-view mirror and accelerate America’s transition toward net zero emissions by 2050.