The Biden Administration and Congress are currently considering what to include in the upcoming infrastructure and jobs package, and addressing the climate impacts of transportation is sure to be a key component.1 While most of the attention has gone to transportation modes that move people—particularly cars, which are the largest contributor to transportation emissions—we also need to invest in getting our freight transportation system on a path to decarbonization.

Rail is already one of the cleanest ways we move freight and has an important role to play in reducing freight transportation’s climate impacts. Congress should consider using any upcoming infrastructure legislation to enact policies to shift freight movements away from more carbon-intensive modes like trucking and aircraft and towards rail to reduce freight transportation emissions. At the same time, we must invest in the innovation needed to get freight rail to net-zero emissions by developing and deploying carbon-free technologies like hydrogen- and battery-powered locomotives. Federal funding will help complement ongoing private-sector efforts to transition to cleaner locomotives that can run on today’s infrastructure.

Rail is One of the Cleanest Ways to Move Freight

Rail is already one of the most efficient ways we can move freight, having a lower greenhouse gas (GHG) emissions profile than any other mode. As of 2018—the most recent year for which data is available—rail emitted 0.048 pounds of GHG per ton-mile of freight moved, the lowest emissions per ton-mile of any mode typically used to move freight.2 By contrast, trucking emitted 0.465 pounds per ton-mile—nearly 10 times as much as rail. Domestic water transportation emitted 0.08 pounds, while air freight ranked the worst by far, at over 2.6 pounds. 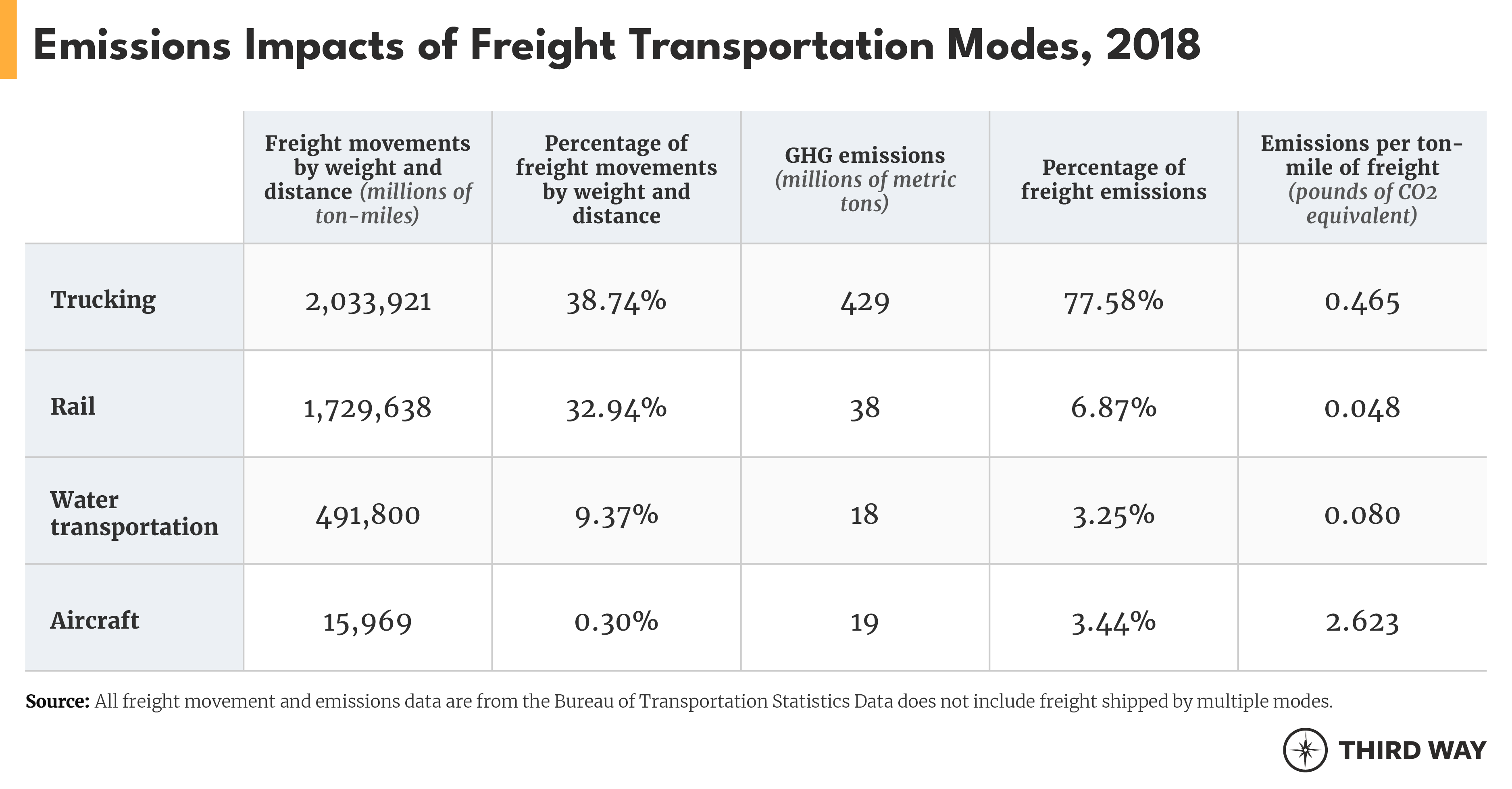 It is worth noting that barge shipping is also a very clean way to move freight, emitting just under twice as much GHG as rail per ton-mile but still significantly less than trucking or aircraft. However, our inland waterways are becoming a slower and less reliable way of moving freight over time, largely due to aging and neglected inland waterway and port infrastructure.3 Our waterways are also limited in scope and geographic convenience, hampering their ability to play a much larger role in U.S. domestic freight movement.

Trucking will continue to be a very important part of freight transportation in the future, which is why it’s important we reduce emissions from heavy-duty trucks as quickly and equitably as possible, by pursuing cleaner vehicle and fuel technologies.4 But since freight rail is less-emitting than trucking, any mode shift from trucking to rail that we can induce will help reduce emissions. This could also have wider economic benefits: reducing the number of trucks on the road would help reduce highway congestion, which costs Americans $179 billion each year in wasted time and fuel.5

Mode shifting is difficult, particularly for low-weight, high-value goods that are typically shipped by truck. Rail tends to be a more common option for longer-distance trips, although rail is increasingly moving goods between closer distances in the intermodal sector (freight that is moved in an intermodal container using multiple transportation modes). Rail is also not as nimble currently for industries that rely on just-in-time delivery, like much of the manufacturing sector, but railroads are investing heavily to improve customer visibility and align movements to precise schedules.6

How much freight could be shifted to rail, and how much emissions could be avoided, varies. Argonne National Laboratory found that we could reasonably shift 4.1% of  truck freight to rail, which would result in a net reduction of 4.4% of freight emissions (a 6% reduction from truck emissions, partially offset by a 1.6% increase from rail).7 The Association of American Railroads found that if 10% of the freight shipped by the largest trucks was moved by rail instead, GHG emissions would fall by more than 17 million tons annually—the equivalent of removing 3.35 million cars from the road.8

Congress should consider implementing policies that would encourage mode shift by increasing rail’s value proposition to shippers. This could include providing additional assistance through existing grant programs, like CRISI or RAISE (formerly known as BUILD), to improve rail infrastructure and intermodal terminals. Funding should also be available for investments in new technologies to improve terminal operations, better track shipment loads, improve security and quality control, and optimize intermodal shipments.9

Congress could also consider providing subsidies for shippers to shift to lower-carbon modes. The European Union’s Marco Polo Programme provided grants for companies to shift freight from trucking to lower-carbon modes and could potentially serve as a model for a U.S. program. During the second phase of the program (2007 to 2013), truck-to-rail mode shift was generally the most successful and was responsible for the bulk of the program’s avoided emissions; however, the program underachieved its mode shift targets substantially due to infrastructure unavailability, market changes, and other unforeseen challenges, so we need to be realistic about what a subsidy program could achieve.10

Getting to Zero-Emission Freight Rail

While rail is already a clean way to move freight, we will ultimately need to eliminate emissions from freight rail entirely as part of our broader effort to decarbonize our economy. These efforts should focus on innovation to demonstrate and deploy clean locomotives and locomotive engines that can be used on today’s tracks. Class I railroads are already investing their own money in developing these technologies, and federal funding can help jump-start these efforts.

Hydrogen-powered locomotives will play a major role in decarbonizing freight rail. Third Way’s decarbonization research initiative, Decarb America, has found that hydrogen will be critical for decarbonizing heavy-duty transportation modes including rail,11 and that we will need to be producing 1.11 million metric tons of hydrogen per year by 2050 for use in freight rail.12 Hydrogen-powered trains are already being demonstrated in Europe,13 and Canadian Pacific is planning to develop North America’s first hydrogen-powered locomotive, retrofitting a line-haul locomotive with hydrogen fuel cells and battery technology.14

Battery-powered locomotives will be another option. Battery electric cars are already a proven technology and are near price parity with traditional cars, but rail-specific innovation is needed to develop batteries with the power and range freight railroads need for long-haul service. BNSF Railway and Wabtec recently piloted a long-haul battery-electric locomotive in California using a grant from the California Air Resource Board.15 Early results yielded roughly 11% reduction in fuel consumption.16 Progress Rail and Pacific Harbor Line are planning a demonstration project operating a new Joule battery electric “switcher” locomotive in the Ports of LA and Long Beach.17

While there continues to be debate over whether to electrify U.S. railroads by constructing overhead power lines, Third Way does not believe this is the best path forward. The capital cost of electrifying our railroads could be as high as $4.8 million per track-mile19 for a total cost of over $600 billion.20 That does not include the cost of expanding tunnels, overpasses, and other structures to provide clearance for overhead power distribution, the cost of building new power plants where additional electricity supply would be needed, or the cost of purchasing 24,000 electric locomotives. Additionally, multi-year construction of a nationwide overhead system would create disruptions to rail operations, which could result in shippers shifting their freight to trucks which would be worse for emissions in the short term.

Instead of electrifying our rail infrastructure, we should focus on developing and deploying technologies that will enable zero-emission locomotives to continue taking advantage of the expansive infrastructure we already have.

Rail is already one of the cleanest ways to move freight—but as part of our efforts to decarbonize transportation and the economy, we must invest in the technologies needed to fully transition to zero-emission freight rail. Class I railroads are investing their own money in hydrogen- and battery-powered locomotives, and Congress should provide federal funding to bolster these efforts so we can accelerate the deployment of these technologies. Congress should also consider policies that could help shift more freight off of more carbon-intensive modes and onto rail as a way to reduce emissions from freight transportation as a whole, even as we focus on transitioning to zero-emission trucks and scaling up sustainable aviation fuels. The upcoming jobs and infrastructure package is the right opportunity to make these investments so we can get rail, and freight transportation as a whole, on the path to a net-zero future.